Tuhirangi writes on the sky 🎧

In Māori culture, the singing of waiata (songs) and the playing of Tāonga Pūoro (musical instruments) creates open channels for the reverence and expression of divine energy and mauri (life force). This nuanced system of communication and interaction between the realms of the material and divine is reflexive—the intent of the practitioner is of equal importance as the practice. I talked to Ngāi Tūhoe carver, Te Hīnau and Pākehā musician, John about their ongoing collaboration, which combines tāonga pūoro with analog and digital musical technologies.

Before their story begins, I would like to acknowledge the Gadigal people, whose traditional lands I live on and offer my respect to the Elders past, present and future. I would also like to give thanks to the people who welcomed me into their worlds and made this story possible. 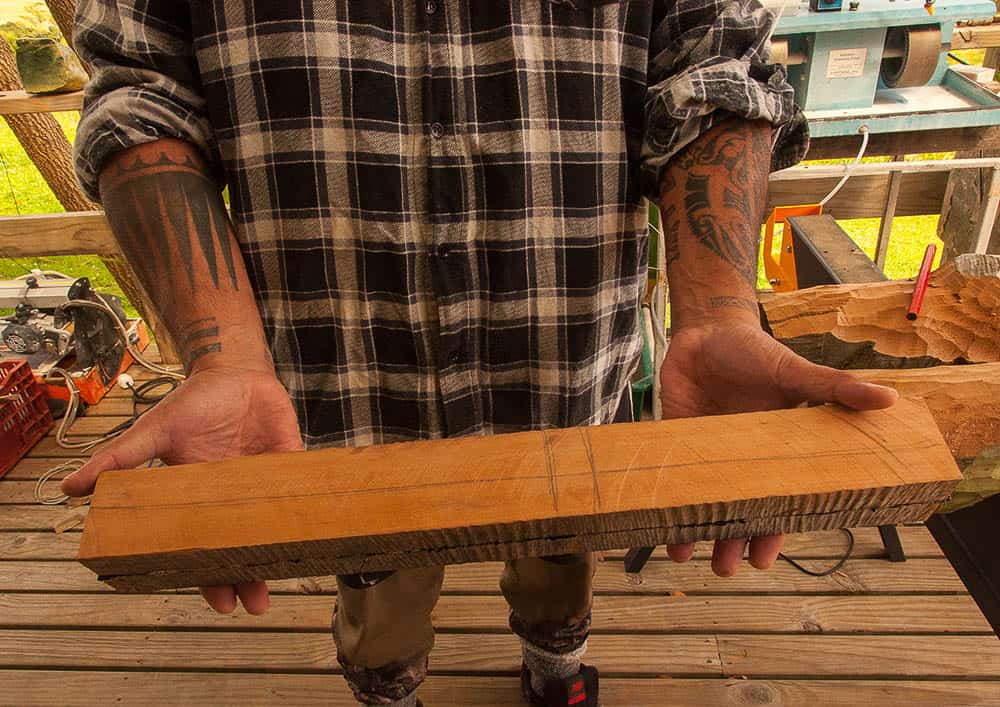 Found only in Aotearoa (New Zealand), the pūtōrino’s tapered, wooden form references the chrysalis of the native case moth (Oeceticus omnivorous). The instrument is unique in that it has three voices, a male, a female and a third that is something “other”. The male voice is summoned when the pūtōrino is played in the manner of a trumpet. When cross-blown, the voice is that of Hineraukatauri, the atua (a divine or supernatural being) who presides over the flute whānau (family). The third voice is said to belong to Hineraukatauri’s elusive daughter, Wheke, who has dominion over the barely discernible sounds heard in forests.

When a musician is playing the pūtōrino, they are simultaneously sharing ha (the breath of life) with Hineraukatauri and the instrument itself. By communing with these energies, a locus of transmutability or sacred space is invoked.

Te Hīnau explains “we acknowledge the presence of the divine—it’s not just an object, it’s voice, the voice’s frequency gives us a connection to the other side, it’s an incantation. Incantations are how we speak to the universe and not just about it. We also recognise the spirit of the reason we congregated ­– it could be for healing, an expression of desire or love for others.” 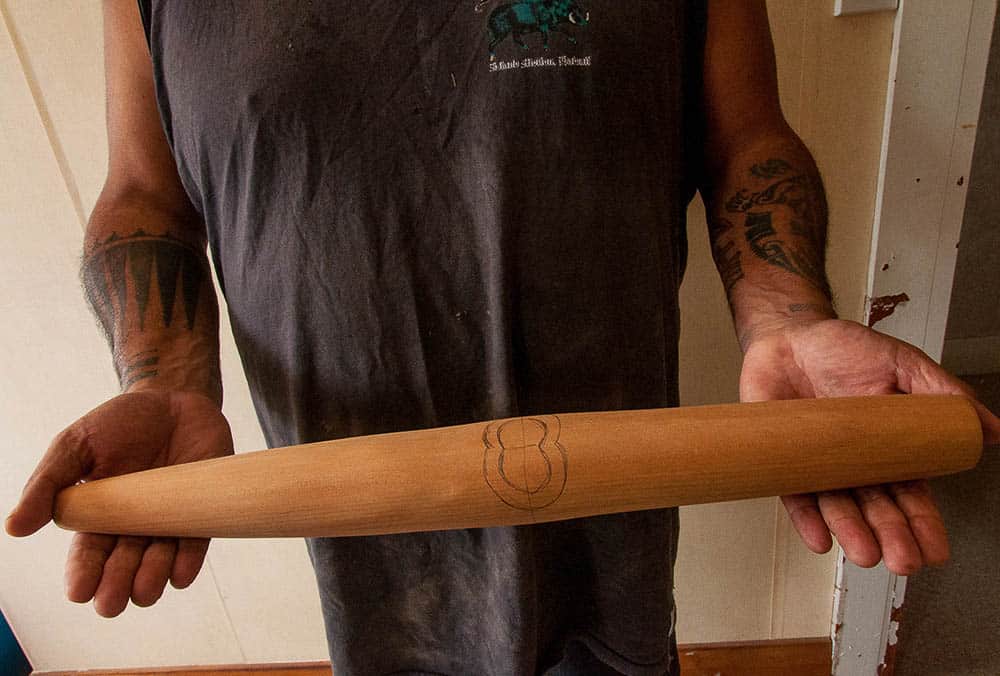 The pūtōrino begins as a solid piece of Tōtara or Matai wood, which is halved, hollowed and carved. The two halves are then reunited and tightly bound with cord—historically the aerial roots of the Kiekie (Freycinetia banksii) were used for this purpose. While talking to Te Hīnau it became clear that the philosophy underpinning the design process both mirrors and reinforces the complex system of relationships and protocols related to spirit and matter in Māori culture. This philosophy is universally relatable to all acts of making and being.

“For Māori everything has a wairua (spirit) and everything—including music—is atua inspired. The wood chooses me, we find each other. I have an idea about the design at the start, but it’s in our conversation that its persona, its form evolves. The rākau (wood) has a purpose and I acknowledge that. I acknowledge the atua of the forest for the rākau used to make, in this case, the pūtōrino, recognising that this instrument has its own mauri, its inner life force, as well as its own mana (external power or authority).”

Te Hīnau explained the all-encompassing concept of wairua (spirit) to me using the analogy of a spider’s web, drawing his hands out wide in a cat’s cradle formation, wiggling his fingers and saying, ‘if you touch it here, it is felt here, it connects everything in the universe.”

The notion of multi-dimensional interconnectivity and the reflexive power structures inherent to all levels of being and doing in Māori culture were a constant thread in our conversation, which inevitably shifted from tāonga pūoro, to the subject of land rights. 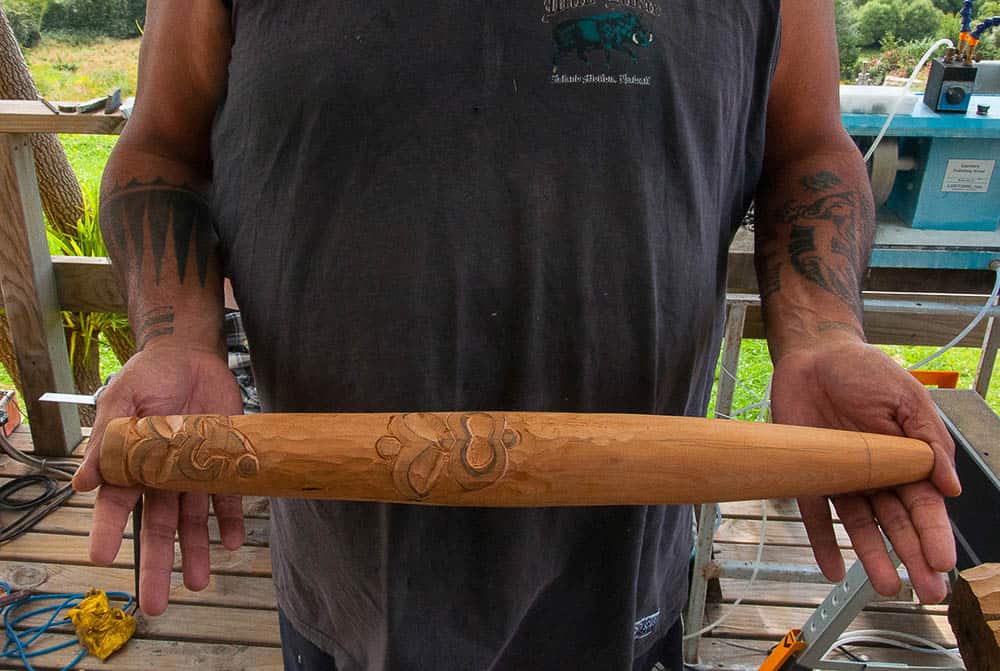 In 2014 Ngāi Tūhoe entered into a landmark settlement of their historic grievances with the Crown, asserting their mana motuhake (right to autonomy and self-determination) and successfully endowing what was then known as the Te Urewera National Park with the status of a legal entity, belonging to neither the Crown or the Iwi (tribe). Tūhoe believe that Te Urewera cannot be owned. Te Hīnau expressed this idea simply, “the land is our earth mother, it’s not real estate.”

That Tūhoe negotiated a settlement transcending the concept of ownership of vast tracts of land and forest is seen as provocative and confusing by some, however it makes perfect sense when viewed through the lens of Māori philosophies and culture.

“Everything in Tūhoe is done in the spirit of being inclusive, we have no wish to colonise others. We seek our independence by being interdependent, we do not want to be dependent. We wish to remain being Tūhoe whilst making a contribution to the wider community of Aotearoa.”

Te Hīnau went on to discuss how Māori concepts of being, space and place manifest in his everyday life, both as a carver and a member of the Tūhoe Iwi (tribe).

“The role of a carver in the community is to speak the narrative of the people. The great Whare Whakairo (carved meeting houses) speak of the narrative of my Tīpuna (ancestors), our histories, traditions, philosophies, values and our whakapapa (genealogies). It is my role today to add to that legacy and not take away from it. Consumable things that are manufactured are something different, this can’t be sold, I don’t own it, I am it.”

“…through our cultural practices and the sustainability of our culture we encourage our wider community to engage with and enjoy our perspective, for it is not the difference, but the indifference that hobbles us. John and my collaboration, our cooperation with this project is a way of sharing through waiata (song) the belief that we are one with the universe and everything around us.”

Although the combination of a complex Indigenous cultural construct, an ancient musical instrument and digital technologies may seem at first glance to stand outside the boundaries of a sacred contract, that conclusion couldn’t be further from the truth. The colonial trap of othering assigns non-Western cultures to the past, marginalising them and denying their rightful role in contemporary society as progressive, living entities. Te Hīnau describes the collaborative space he shares with John in an equally consecratory manner as any of the other energies he speaks of. 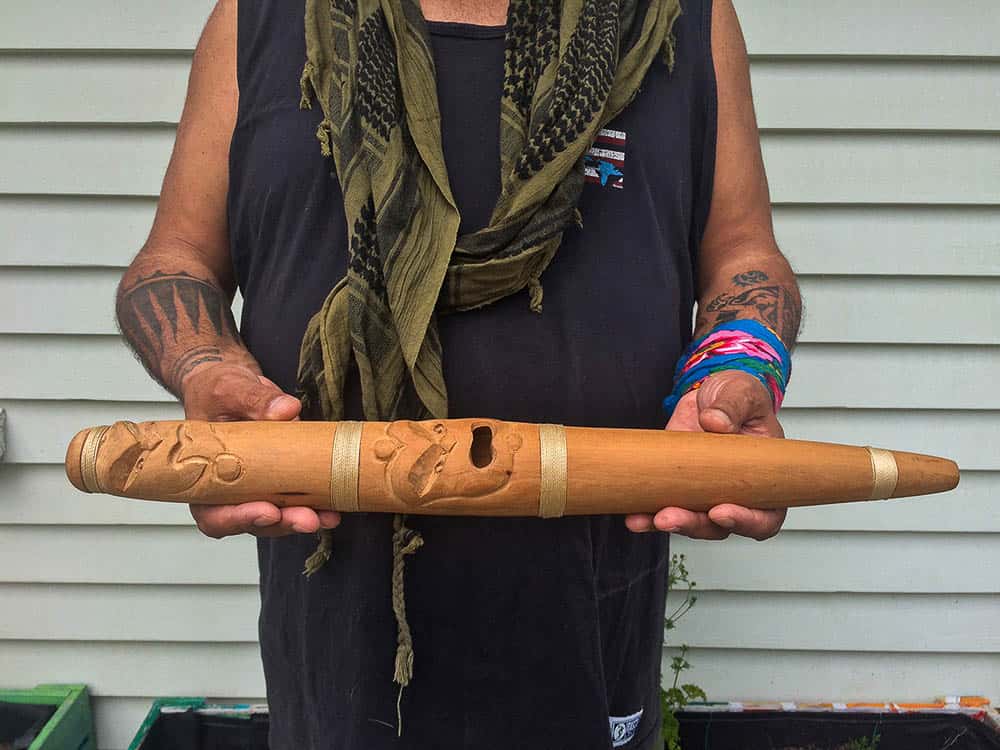 “Collaboration is a living thing—we are working with it. It is not to be commodified, it’s about keeping the sacredness of art forms like music secure. John’s skills and his earlier experimentation have a sense of what I’ve been talking about… he has the heart for it. Compositions are the narrative you can share with the rest of the world, it’s one small part of the greater narrative. The collaboration is part of that discussion.”

To hear the pūtōrino played is to experience enchantment, however John points out that apprehension of its most haunting, transcendent characteristics is problematic. “In the recording the thinning of the veil is lost because it’s a facsimile, so we give the sound settings to amplify those aspects, to emphasise or highlight things that may be diminished in the capture process,”

“It’s about being in tune with the wairua and the tapū (that which is sacred or forbidden). It’s sometimes like a blind man feeling his way back onto a path. I can feel it when I go off the path, the process of finding my way back is the reward.”

Although cross-cultural collaborations are not without their challenges, John’s experience of the sacred space established by the pair’s mutual intention to be at one with the universe is congruent with Te Hīnau’s. “It’s not about us, it’s about the notes and frequencies and what they evoke, if it’s about me it’s sabotaged. The most successful outcomes, I can’t remember how they came about, they came out of the tapū space.”

Te Hīnau re-iterated the all-encompassing ethos that he and John work with, then went on to address its major challenge. “We should spend our lifetime supporting and encouraging our wairua (spirit), this is the most important part of us, our spirit is forever, our body isn’t, it has a shelf life.”

“Economic or commercial gain would change it (the music), so the question then is how do you get it out there? When an Indigenous organisation adopts a colonial model it gets compromised, it’s about staking out the ground that works with honouring the divine, not working with the default. I’m not willing to compromise it, it needs to carry the spirit of the intention and giving others the experience of it is the key.”

“I want it to be like Tuhirangi (the redness of the horizon) and write on the sky.”

Read more about Tūhoe’s settlement with the Crown and the Te Urewera Act 2014 here and here.

To learn more about the origins of tāonga pūoro, visit Te Ara, the Encyclopaedia of New Zealand

Usually, you would find a bio of the author here, but it felt incongruous to place a conversation of this kind in a context that denotes a single voice as fulcrum. Last names are not used in the story because all interested parties agreed that this is not about personalities but the intention to share the Māori concepts of being, space and place. Te Hīnau is a teacher and hunter who lives in the bush. John is a musician and writer who lives near the ocean. Michelle is an art historian and writer who lives in the lands of the Gadigal people. Thank you for reading and listening.