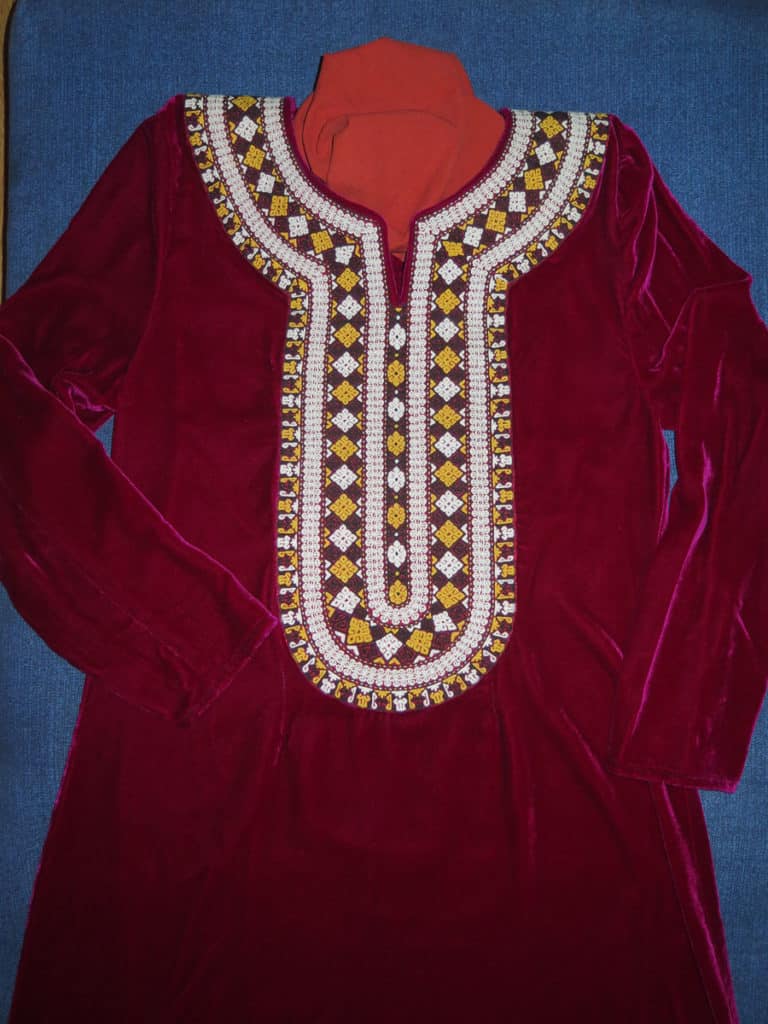 When I opened the front door that led directly to the large kitchen, the centre of the family life of my Turkmen hosts, I saw my hostess and some ten older women sitting in a circle on the felt mats that covered the floor. They were facing each other, each with her teapot and cup in front of her, looking sad and earnest, and obviously engaged in a discussion about some problem rather than enjoying the small talk of a casual visit.

I greeted them with “Salam“, the Turkmen form of greeting, and they greeted back, but I felt that the kindness that is usual among Turkmen people was missing. They looked at me, not in an unkind or hostile, but in a somehow strange way, which I could not explain to myself. I walked past them to my room, got my passport, which I had forgotten and which was why I had come back from town, said good-bye, and went back into the afternoon heat of the oasis town, with an uneasy feeling.

In the evening, when I came back, the women had gone, but a close friend of my hostess, who was a lecturer at the German department of the university, and who helped me as a translator, had arrived. She said she must tell me something. She had been asked by my hostess to do so, as her German was better than my Turkmen and Russian. She explained to me: “The thing is, Hermann, the women who were here found out that the problem is the wedding dress.” I did not understand. She continued: “As you know, the oldest son of this family married a Türkmen girl, Amangul. They are still living here with his parents. They like this spacious flat, the old part of Ashgabat, its streets lined with plane trees. Now, while you were here, the time had come for the young mother to give birth to her first child, and she was taken to hospital yesterday. To the great dismay of all of us, she suffered a stillbirth.” I was shocked. I told her that I had talked with Amangul only a few days ago about Turkmen costume. I had explained how it struck me from the moment it first appeared in European galleries in the 1970s, that the clothing  and jewellery had been brought from Afghanistan by hippies who had travelled there to escape the European narrow-mindedness of the time (she found that difficult to understand). I added that ever since Turkmen costume had not stopped capturing my interest. Amangul seemed pleased to see that I valued her culture. “I cannot say how sorry I am,” I said, “that now she has lost her child.”

“Yes,” said my translator, “the women came to find out what the reason for stillbirth could be. They said Amangul had always been in good health, and there had not been any complications during her pregnancy. So there must have been a reason unknown to the young mother, unknown to us all, and they came to find it out.”

And they did find it out. My translator told me, after many excuses, that the women thought that I myself was the culprit—though quite unintentionally, as they admitted. What had I done? The thing was that I was preparing an essay on Turkmen clothing, including not only the traditional phase, but also the Soviet epoch and the independence since 1991, and I had asked Amangul would she sell me her wedding dress as a splendid example of contemporary Turkmen clothing. (This also gave me an opportunity to support the young couple financially without looking paternalistic.) Amangul agreed, I offered a good price, and everybody was happy.

“Well,” said my translator, “that is exactly where the problem lies. The women knew of an old Turkmen belief which forbids to give one‘s wedding dress away, or misfortune will follow. Now they think that the reason of poor Amangul‘s stillbirth is the fact that she gave her wedding-dress to you.” Amangul herself as well as her mother-in-law affirmed they had been completely unaware of that belief.

I was therefore asked whether I would be willing to give the dress back. Of course I did, and Amangul suggested a solution worthy of Solomon: she made an exact copy of her marriage dress and gave me that.

In the meantime, she has given birth to three healthy children, two boys and a girl. 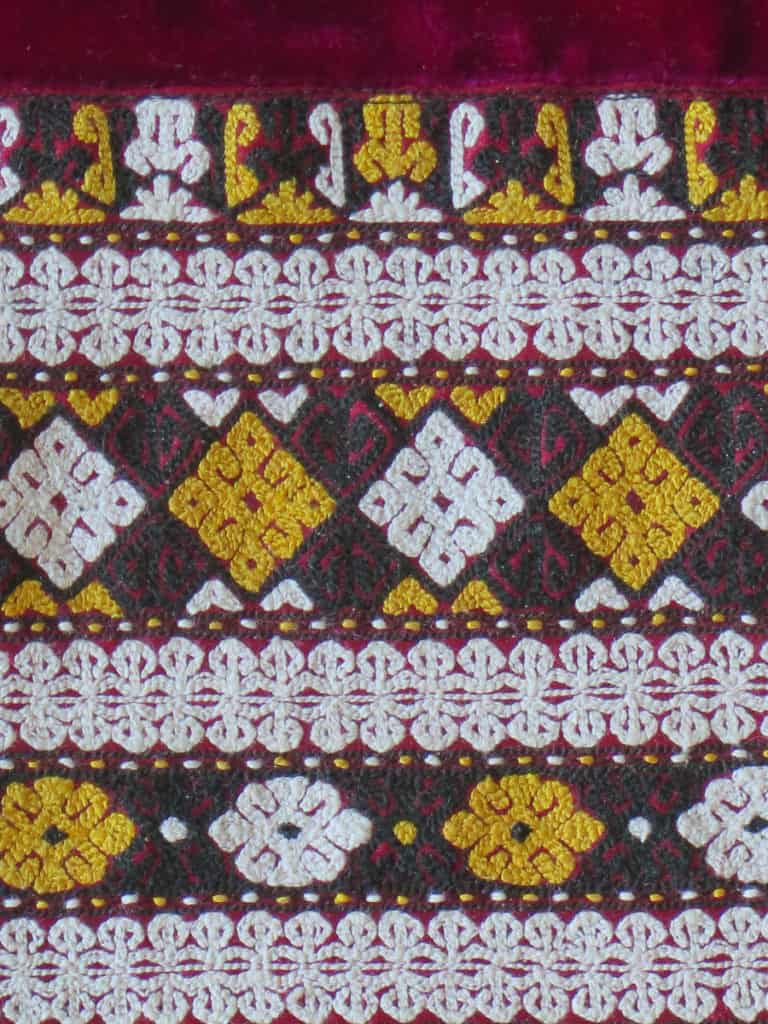 Embroidery round the collar. The motifs are variations of the classic Turkmen gočak ” ram’s horn“. Fine workmanship. Velvet was fashionable at that time. With the Turkic peoples, the colour red pertains to life and fertility.

The wedding-dress is one of my treasures. On the one hand it may be said that the copy lacks the aura of the original; but then, Amangul made it herself: it is a second original. And the pieces of Turkmen clothing and jewellery have always been copies of copies of copies. Furthermore, the new dress gave me the priceless gift to open my mind to the essence of Turkmen costume. I would like to mention three points.

First, the incident shows that, although there are good hospitals in Turkmenistan, many people, particularly the older ones, still adhere to the old beliefs. One should keep in mind that the shamans‘ healing powers are a mystery to Western orthodox medicine, as I experienced myself a few years later. Diseases as well as any other misfortune was, and to some extent still is, ascribed to the workings of the evil eye, evil spirits, black magic and unfortunate actions like giving away one‘s wedding dress. This whole field is a complex topic with different levels. Clothing plays an important role in it.

Secondly, the Turkmen regard their traditional clothing and jewellery not as mere objects, but as power-laden, active subjects, as imbued with power conveyed by the materials, colours and motifs embroidered and applied on them. They were, on the one hand, protective: they warded off evil in all its aspects; and, on the other hand, auspicious: they helped to attract good forces, health, fertility, prosperity. These beliefs, which resemble those of Siberian shamanism, existed side by side with Islam. As my story shows, they are gradually being forgotten.

Thirdly, this slow, but steady process of forgetting was, and is, due to the influence of Communism, radio, television and other modern media, in a word: modern times. Three generations may be enough for it to take place: the grandparents practised the old beliefs, their children have a vague knowledge of them, but no longer practise them, and their grandchildren and their descendants do not know them any more at all. “Times change, and we change with them,” said the Romans.

The story happened in the late 1990s. I have changed the name of the young woman.

Andrews, Peter Alford, “Crowning the Bride: Some Historical Evidence on Türkmen Women’s Costume. With Drawings by Mügül Andrews.” In Folk 33 (1991): 67–106.- Written by two of the leading experts. 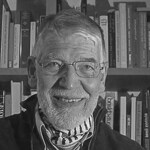 Arts and languages, foreign peoples, particularly the Orient, nomads and oases with their bazaars have always fascinated me. After studying Art History and Modern Languages in Germany, England and France, I work as a language teacher and freelance researcher based in Germany.

For the love of Lao - Studio Naenna
Make the Qanats flow: Women revive a patriarchal tradition
Offerings for absent friends: An interview with Ro Cook
With the tip of a needle
Silk from San Pedro Cajonos: Artisans weaving new connections through the web
The quilts of Jess and Cynthia Johnson: A mother-daughter partnership
A new festival for Madagascar, the home of wild silk
My grandmother’s hands: Nina Oberg Alaifea and Stephanie Oberg