Wrapping the present within the past 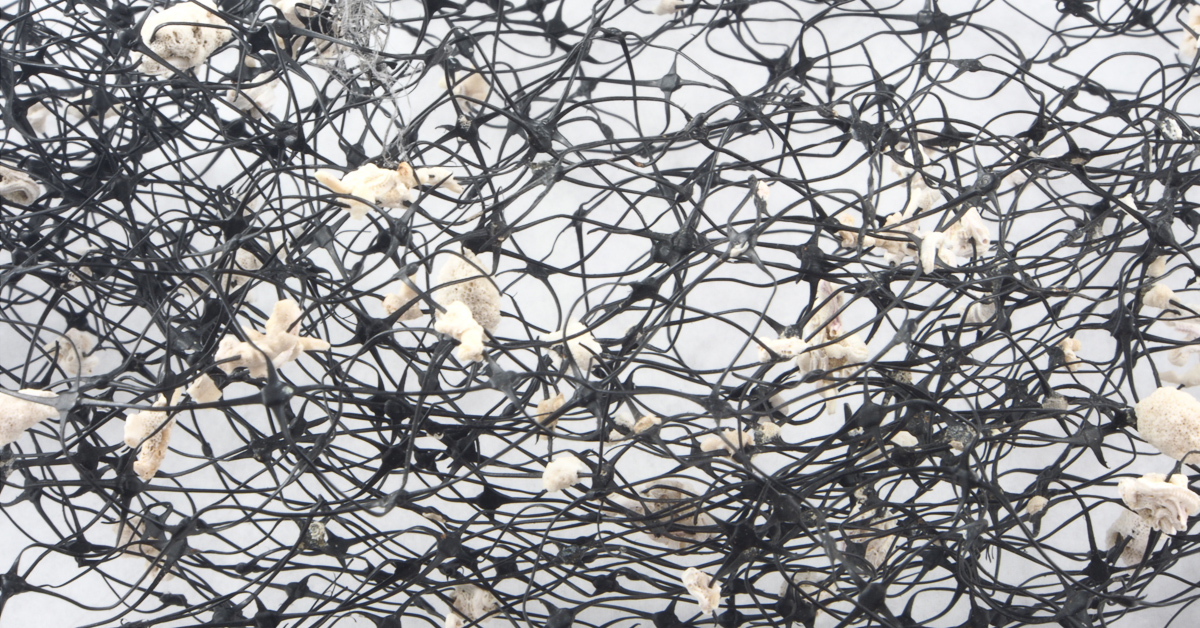 This morning I collected flotsam and jetsam on a morning walk along the seashore below my jewellery studio on North Bruny Island, south of Hobart, in Tasmania.  I’m one of the lucky people who have both city and country lives, spending half of each week at my island studio where I can fully immerse myself in creating and thinking. Here I am freed from many of the mundane but necessary tasks of life. I arrive with an eski of food and leave with pieces of contemporary jewellery. Time seems more bountiful here. I see more, I get more done. I collect and I make.

As I sit at the bench in the studio I can hear the sound of the sea pushing in and out of the bay below, sometimes breaking on the orange lichen-covered rocks on the shore. The objects that I collected this morning—a piece of sea sponge, a shell, and a piece of black fishing net encrusted with small marine snail shells—are drying on the table on the deck outside, treasures to my eye at least.  I can hear the wind gently moving one of them around now as it sits drying on the table.  Sometimes they disappear. I am left to wonder if they have been blown away or if they have been “re-collected” by the ravens who are my all-seeing, ever-present neighbours. 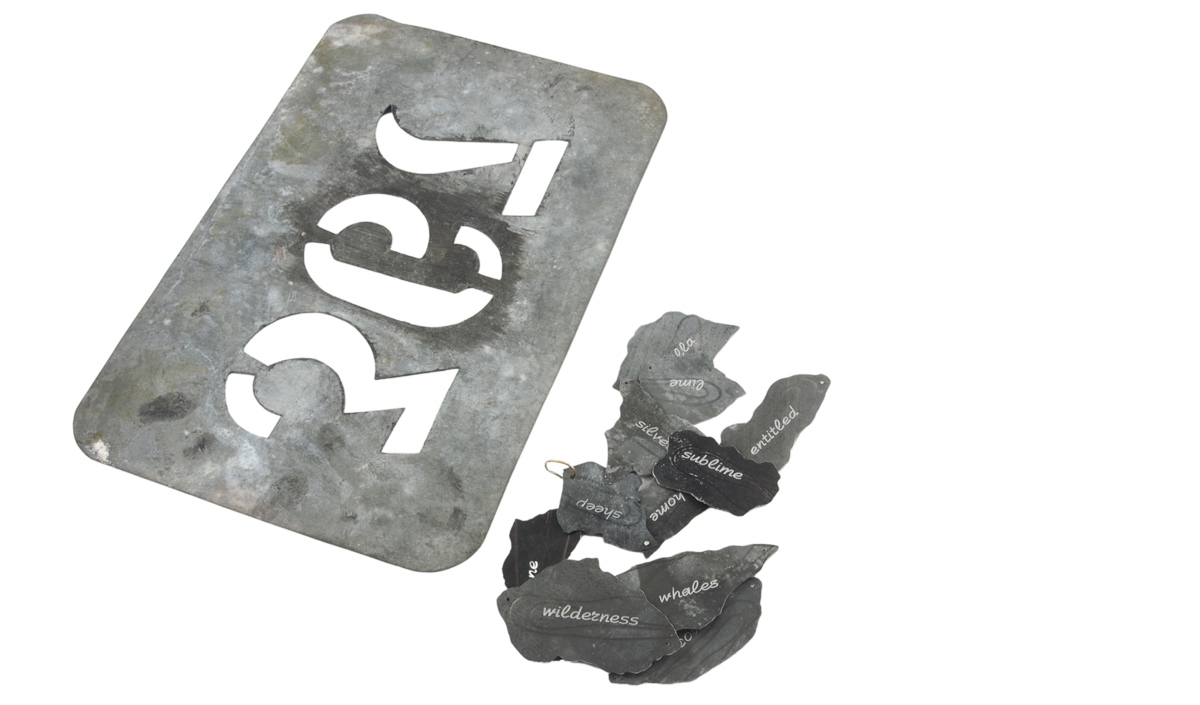 Janine Combes, 2022, engraved text, recycled tin apple label stencil, work in progress for project: what we take, what we cast off and what might have been, 2022

I recently started a research project which is about abandoned, cast-off objects. For me, these are the visible traces of places where the people have left, the places which are returning to nature. However, we more often think about the objects which we collect and keep rather than discard. Why is it such a strong human inclination to collect and to souvenir? Like many other people, I collect objects to keep memories alive. These objects help me to hold onto a particular point in time, a feeling, an image, a sensation. For me, they act as souvenirs. Author Susan Stewart says that “the function of the souvenir is to envelop the present within the past.” Some people take photos, but I want to touch the object, turn it over in my hand and feel its texture to unlock the memory.

The objects I collect are not only from nature. Many are made by human hands. They have been inherited, gifted, bought or found. Within my collection are beautiful handmade ceramic cups, a small woven basket made from natural fibre, a brooch made of rusted steel and a small carved lighthouse made from stone. Walking into a room in my house I can conjure up the sound of my mother sewing on her treadle machine in the sunroom of my childhood home, or the image of a woman making pottery in a small village in Fiji, accessible only by boat. All this remembering happens through the magic of objects. Each one stands in for an experience, a feeling, a place, a moment of my life. But I know that the object only has such meaning to me. When I show it to someone else and tell them the story there is a connection for them too, but it’s brief and fades quickly. I can see it in their eyes. The bowl is just a pottery bowl, the shell just a pretty shell. It’s not their memory. 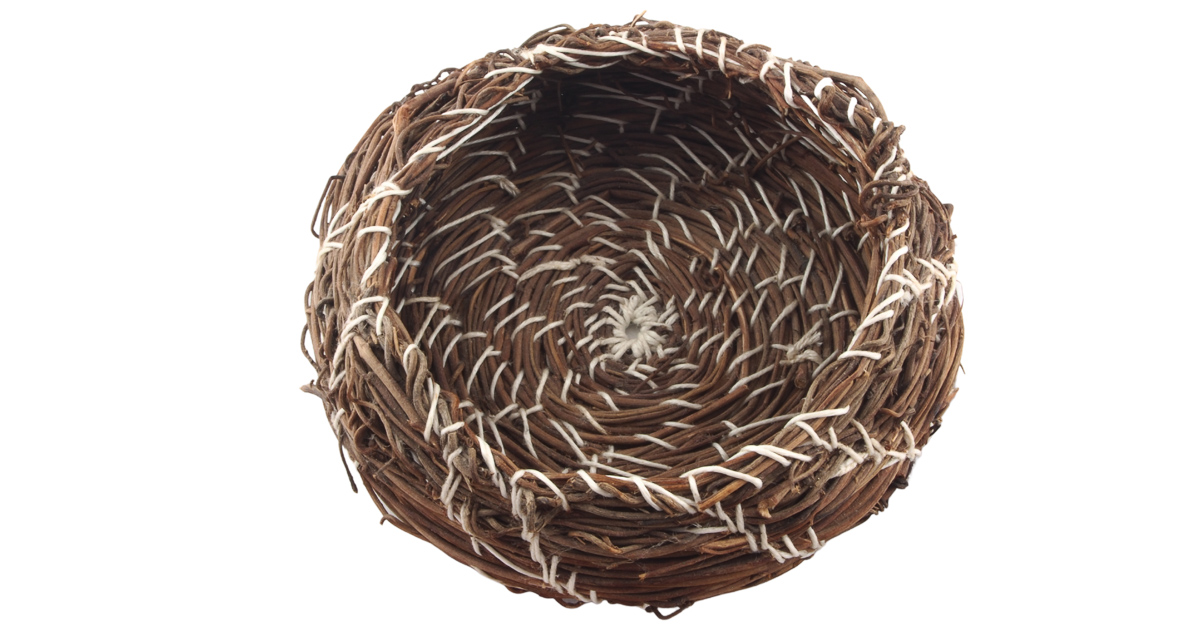 The objects that I live with move in and out of focus in my life. Sometimes I don’t think about them for months or years. But eventually, they step forward, take their place again. As Canadian author Jordan Tannahill says they are “objects waiting with patience to be acknowledged.” These collected objects each tell their own story, but it is intertwined with my own. The relationship is reciprocal. They add depth to my life. In return, I care for them, value them, and honour their stories.

Yesterday I visited the local recycling shop and saw objects which have been set loose from their context and meanings. This is when I think the world has too much stuff. I gazed at a box of photos of people no one knows. They used to be someone’s family, now they are dislocated objects.

For me, objects exist in relation to the stories which surround them. I justify having so many objects in my life by continuing their stories or by refreshing them. When people look at my green folding vintage sewing box, containing a colourful collection of old buttons, I tell them about how I used to play with this box as a child. My mother would put it down on the carpet and I would sort all of the buttons into shapes or colours and then put them all back again. For me, it evokes feelings of contentment, total concentration and pleasure. I remember my mother making me a special dress, allowing me to choose the buttons to add to it so I felt part of the making process.

Recently I have been thinking about how to balance my need to make things with the fact that the world has too much stuff. My response is to take objects which have become disconnected from their stories and ‘‘fit them out with new paternities’’ to use the words of Paul Carter in The Road to Botany Bay. 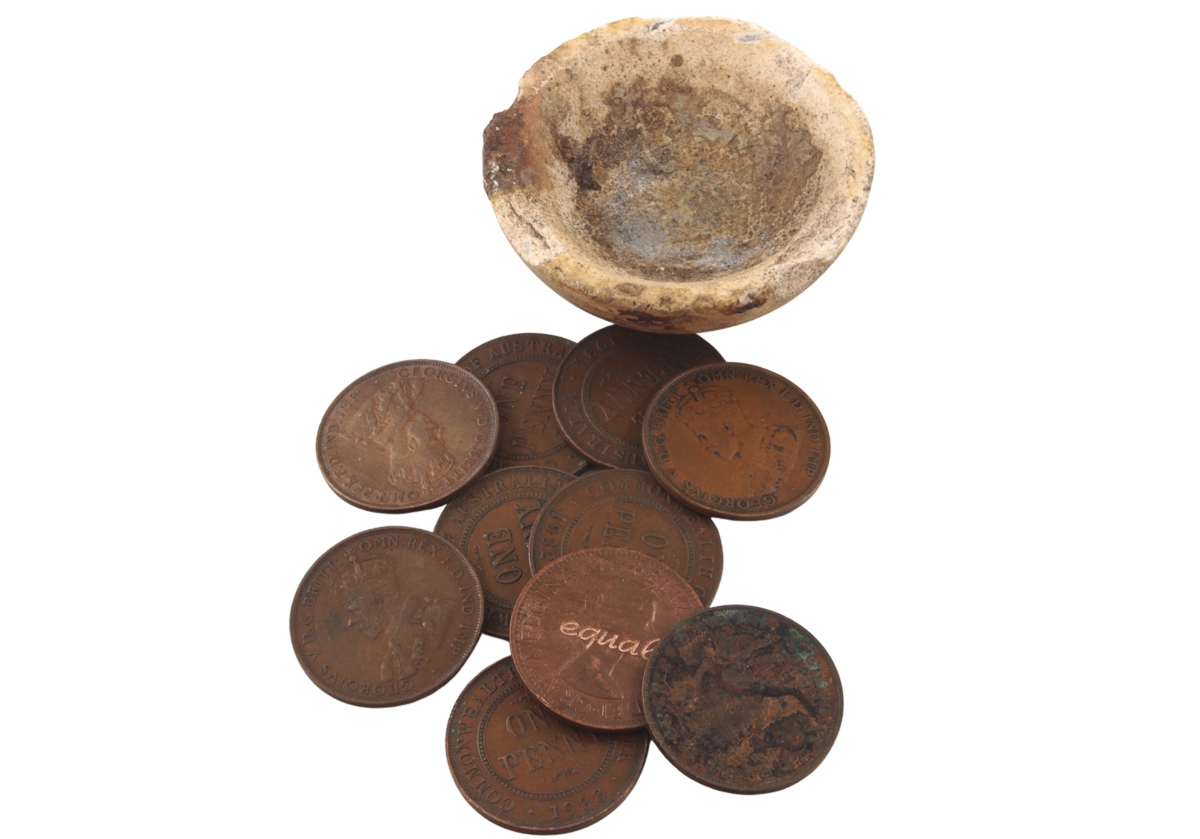 I have been working lately with old coins as these are associated with memory. I source them from second-hand shops or people give them to me. I take them home, inscribe them with text and set them off on a new journey. I have been working on pieces about women’s rights issues, using early Australian Pennies as a link to the way the Suffragettes harnessed the humble penny to push for votes for women. Other recent materials are vintage apple label stencils made from tin. I have been cutting, texturing, and engraving them to tell new narratives of history and place. The soft tin holds a trace of its former life, but also of the new life I give to it. In the words of Siri Hustvedt, it allows me to “remember what I have never seen.”

I find it hard to shake the idea of an object as central to craft making. There is something about longevity and continuity which seems to matter. But maybe that’s because I am a jeweller, and we like to leave a legacy. I still make objects but often now I make new objects from old ones. The original object becomes the raw material. I harness the energy from it for a new form. Some makers take ephemeral objects like flowers or food and intervene to change their form. But usually, something remains of this process. It can be a photograph or a moving image but there is a discernible trace that lingers. 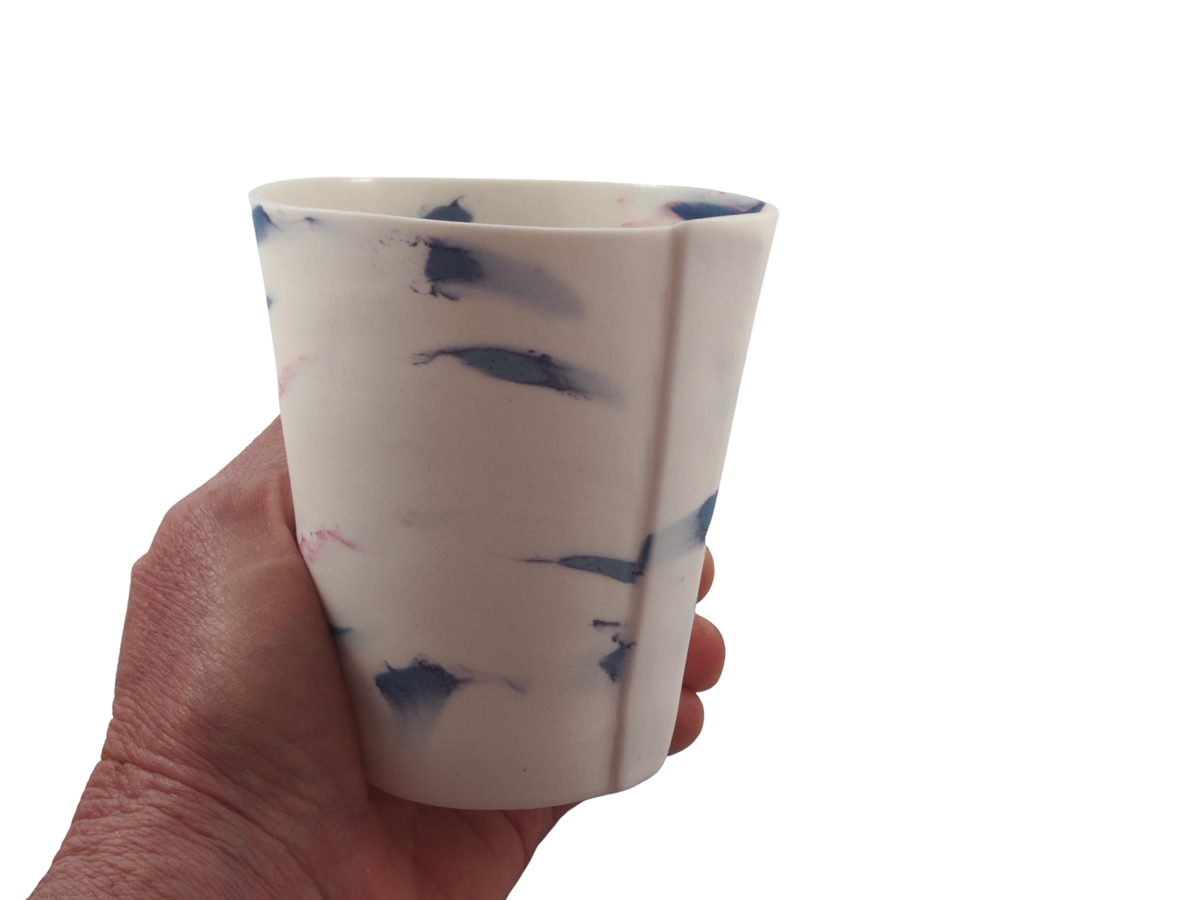 Janine Combes holding a well-shaped cup, a cup made by Nanna Bayer

Can the virtual experience of holding a well-shaped, handmade ceramic cup in my hand ever be the same as the actual feel of it? Sometimes we only need the hint of a shape or a texture to remind us of an experience. When I’m swimming underwater I only need to see a fleeting shape of a fin that might belong to a shark to picture an actual shark. I can fill in the gaps in my mind, complete the picture. So perhaps it is not the object itself or its physicality which is important. It is the meanings we attach to it that matter, that make it precious or memorable.

As I look closely at the objects sitting on the deck of my studio I see that the piece of fishing net is encrusted with tiny shells of a marine snail that has decided to live here.  I think it is special, a jewel-encrusted treasure. This is because I collected it. I remember where and when I pulled it from the rocks, dripping with seawater, the feel of the water on my hands, the sound of the sea eagle calling in the sky above me.

Stewart Susan, On Longing: Narratives of the Miniature, the Gigantic, the Souvenir, the Collection, Duke University Press, Baltimore, 1984. 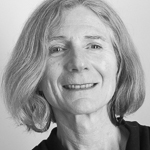 Janine Combes is a Tasmanian contemporary jeweller working from a studio on Bruny Island in Tasmania. Janine is a Master of Fine Arts (Research) candidate at the University of Tasmania. Her current research project is called Paper Towns and Abandoned Places: contemporary jewellery and object responses to what we take, what we cast off and what could have been. Janine has exhibited across Australia and within Tasmania including at Contemporary Wearables, Radiant Pavilion, The Australian Design Centre, The Tasmanian Museum and Art Gallery, Queen Victoria Museum and Art Gallery and Hadley’s Hotel. She is represented by Handmark, Tasmania.

Lost histories: Inscription and Place
Ordentelikheid: South African baroque jewellery
The lei, the garland and the daisy chain
Especies Acuñadas: Divesting colonial currency
The road to Kilombu crosses many borders
Isifociya: The revival of Zulu adornment that protects and beautifies
New Zulu beads to be worn with pride
Wicker Wonderlust, a gallery experiment