Doug Kim presents a global collaborative project by Jennifer KimSohn that seeks to measure the massive human displacement around the world with a collective tapestry.

As you move through the panels of handstitched fabric draped from the gallery ceiling, the diversity of handwork and themes, wash over you in gentle breezes created by your own movement through the works: A field of white stitching on a white panel almost 70” long, with only the words “not invisible” in pale blue type. From Lithuania, the unnatural vision of a penguin in a field of flowers, to illustrate the disconnect of starting over in a new and unfamiliar setting. One stitcher folded her finished panel so her stitches wouldn’t be counted, to represent the refugees who also will never be counted.

These are part of the exhibition and global craft-as-consciousness movement known as 25 Million Stitches: One Stitch, One Refugee. 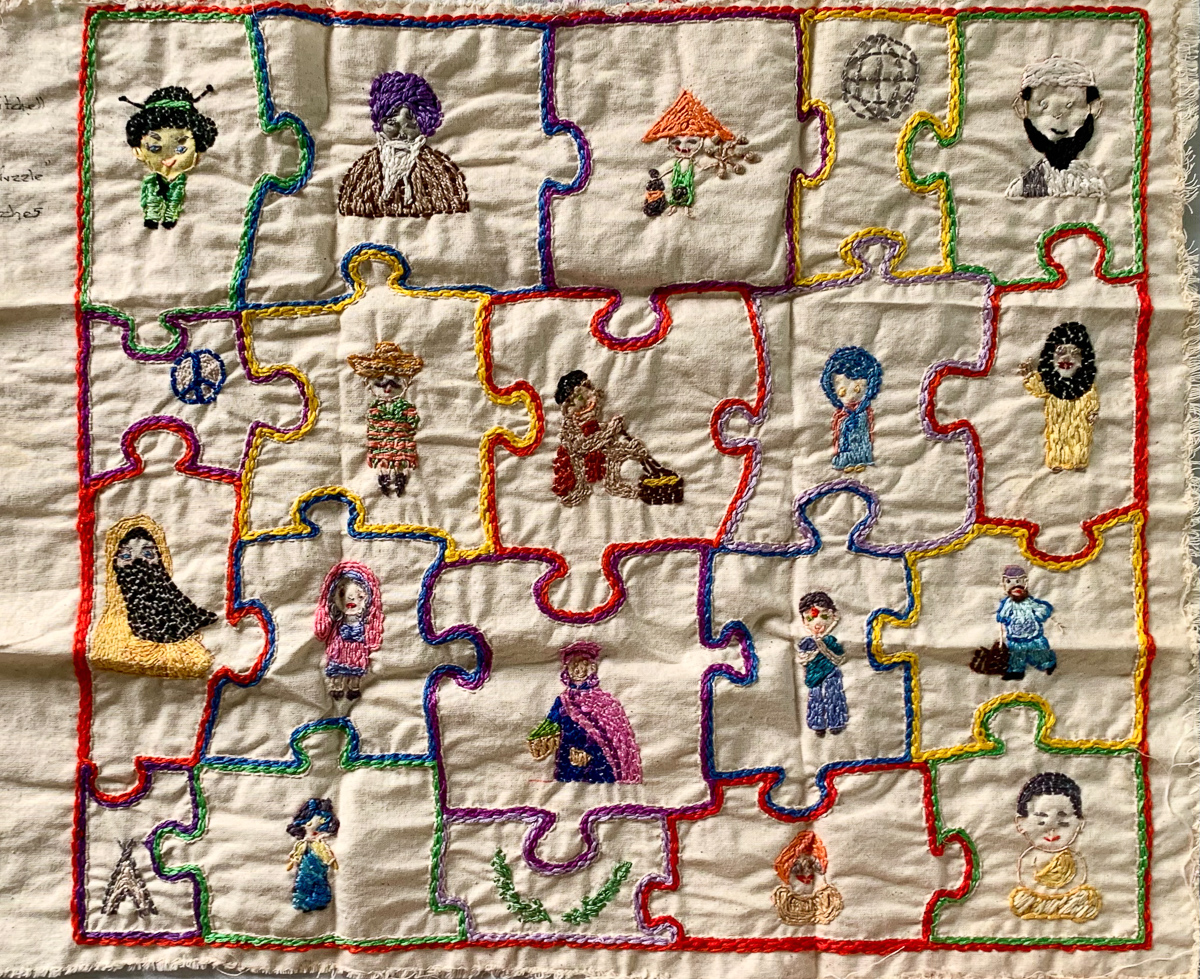 It began as a simple idea from Sacramento fiber artist Jennifer KimSohn: Create one stitch for every displaced person in the world today. KimSohn herself immigrated to the United States from Korea as a teenager and is now based in Sacramento. Her work on Biodiversity/Extinction through the Art & Science Collaborations was shown in the New York Hall of Science, The Pennington School, and in online exhibits for the Queens Chronicle and the E.O. Wilson Biodiversity Foundation. “25 Million Stitches” is by far her most ambitious project and the first to activate a global storytelling community.

Started in 2019, it quickly grew into a global craft-as-consciousness movement, with contributors from 36 countries and all across the United States. Contributors, including the newly displaced because of events like the Paradise wildfire, spent weeks crafting elaborate panels and stories told through fiber. Students from kindergartens to universities contributed, as did people from all ages and walks of life, including doctors, library volunteers and religious groups. 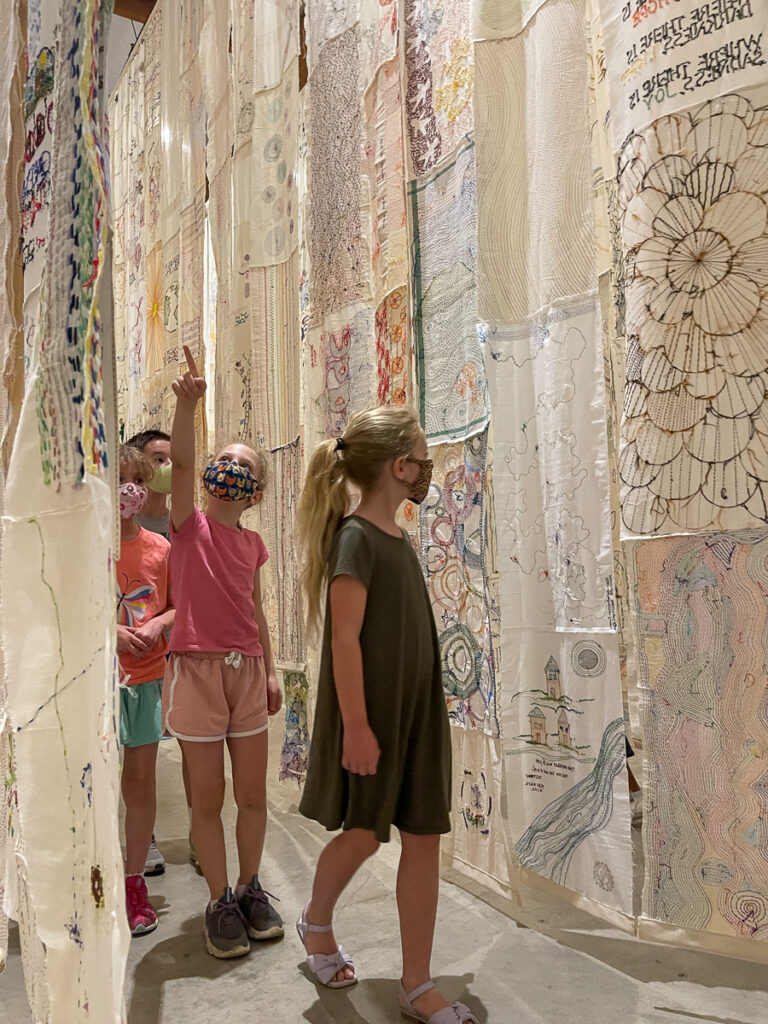 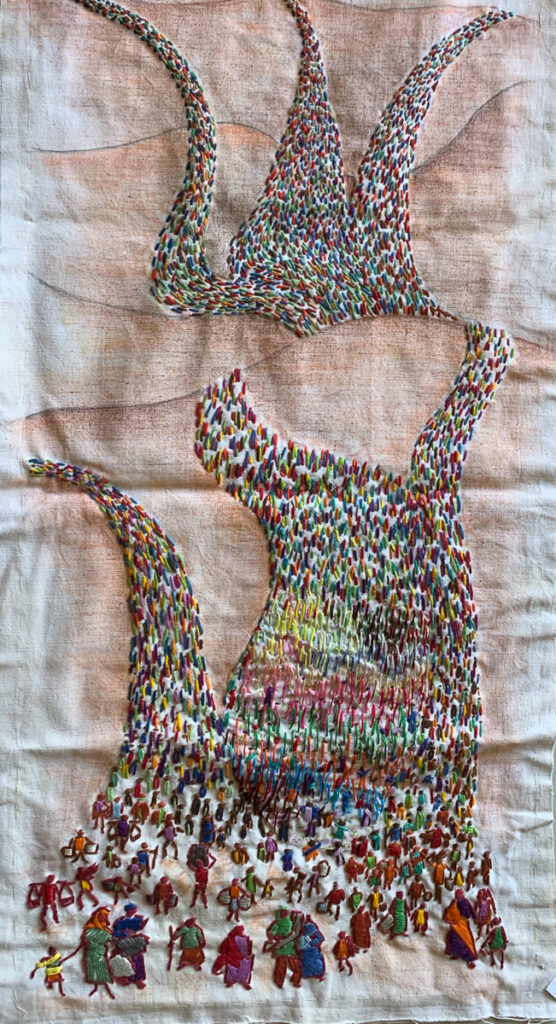 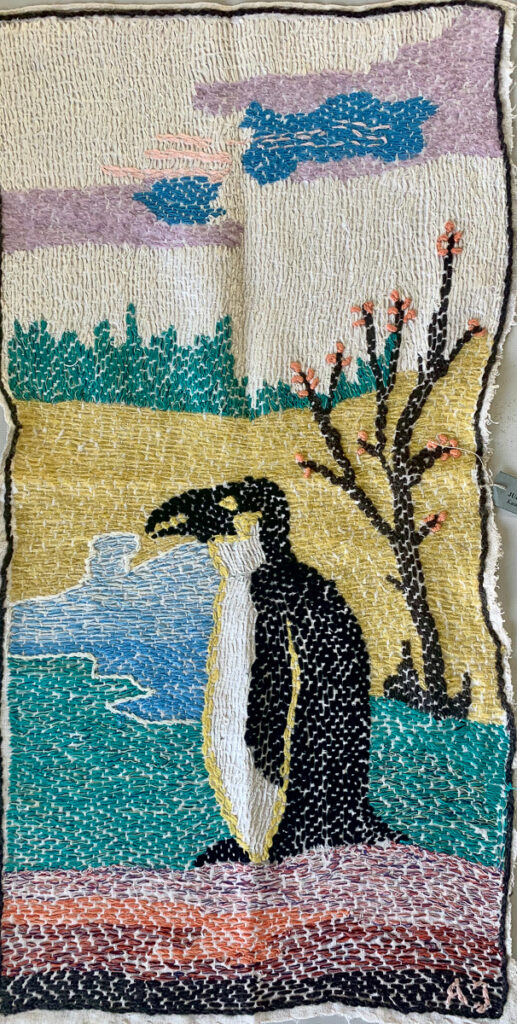 In little more than a year, aided by a growing team of passionate volunteers organizing the artifacts and social media campaigns, the project achieved its ambitious goal: 25 million hand-sewn stitches.

Participants ranged in age from 5 to 91, including asylum seekers, first-time stitchers and experienced artists who had never thought of their art as an expression of social activism. Many were undoubtedly motivated by KimSohn’s decision to work in plain stitching. Borrowing this “traditionally feminine” craft as a tallying method created a familiar, comforting, and intimate platform for the potentially polarizing topic of the refugee crisis.

“I think it disarms people,” KimSohn said. “Because it’s what your grandmother used to do. Even though the subject matter might be inconvenient or challenging, and we have different opinions about refugees, you can approach the project like it’s oh, it’s stitching. I’m trying to lower the barrier that people have about certain issues and bring them together to discuss this as human beings.”

The culmination of this community effort, as is evident on social media posts, is a diverse tapestry comprised of each participant’s unique expression of solidarity with the world’s refugees. The sewn panels clearly reveal the goodwill, hope and understanding of those who participated.

KimSohn assembled the panels into 14-foot sections that hang from ceiling to floor, most recently on display at the Verge Center for the Arts in Sacramento. The panels provide a beautifully resonant expression of art/activism that raises awareness of the immense scope of people forcibly displaced from their homelands by violence and natural disasters. The panels move with the breeze that viewers create by passing through them, creating another level of interaction between viewers and the incredible diversity of artistry. Both individual and the overall collection of panels have opened the hearts of the stitchers and viewers alike.

The time commitment apparent in each panel reminds many viewers to stay engaged with the pressing issues that contribute to the refugee crisis. The collection of work has the potential to speak to a much larger audience and build a more intimate understanding of the challenges that cross the borders of nations, politics, and cultures.

The level of community commitment is even more astonishing given that KimSohn didn’t set out to create a global community of artists. She originally wanted to do all 25 million stitches herself, making simple, repetitive stitches with a quilting machine. After trying it out for three 9-hour-days, she broke the machine, had little work to show for it, and realized that she could never do this alone. That’s when she opened the project up and invited contributors to create their own hand-stitched interpretations of the crisis.

KimSohn now has an engaged global community of stitchers and volunteers amplifying the project and working to find future homes for the work. They’re united behind the goal of spreading more awareness of the crisis. The Sacramento installation, which opened on June 12 this year, reached over 50,000 people in less than one month, thanks to the volunteer team’s efforts with social media and news outlets.

“I still think it’s miraculous that we were able to get this done within a year. People keep asking, ‘How did you get this done?’ I have no idea,” KimSohn said. “It just resonated with people to express their support for the refugees this way. People keep telling me that it’s an uplifting show, and I’m so really happy to hear that. Because we’re talking about other people’s suffering, and we’re acknowledging that. Instead of the show coming off as grim and difficult to process, what you feel is hope, and support.”

Doug Kim is a Seattle-area based design manager in the cloud technology industry, and is the former Arts and Entertainment Editor of the Seattle Times.