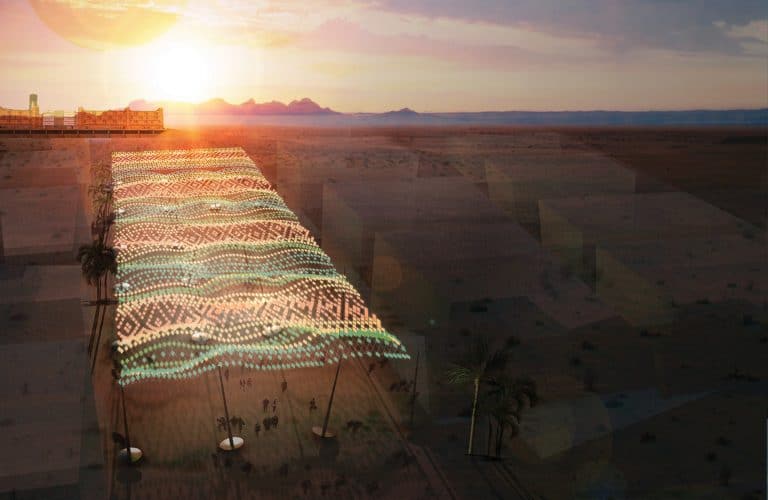 Is this a future for craft traditions?

Interwoven is a Chinese proposition to design a solar system that reflects the design traditions of the Al Sadu tribal rug. The canopy provides shade and also harvests energe from the desert winds. The posts of the shading structure are inspired by one of the major weaving tools used in Al Sadu, the spindle whorl, which can be rotated by visitors.

Most environmental technologies like wind turbines and solar panels have no decorative value and can blight the landscape. So it’s refreshing to see a more artistic approach, particularly one that acknowledges the craft traditions of the region.

But it would be a shame if the original skill in making the Al-Sadu rugs with wool was lost. The design did originally evolve from the materiality of the fibre, construction of the loom and symmetry of the human body. That remains a critical source of our creativity.

China's craft revival: The cultural shift
A world in cork: How China refined the Xmas card
Ma Luocheng ✿ The craft of "impeachment"
Dawn Beasley ✿ On a slow boat to Jingdezhen
Piecing together an ancient ceramic past, by Maggie Moy
An examined life: Fairweather and China
Beijing Shadow Show Troupe combats "electric shadows"
Crafting “natural” conceptions in and of China, of its nationhood and its people...