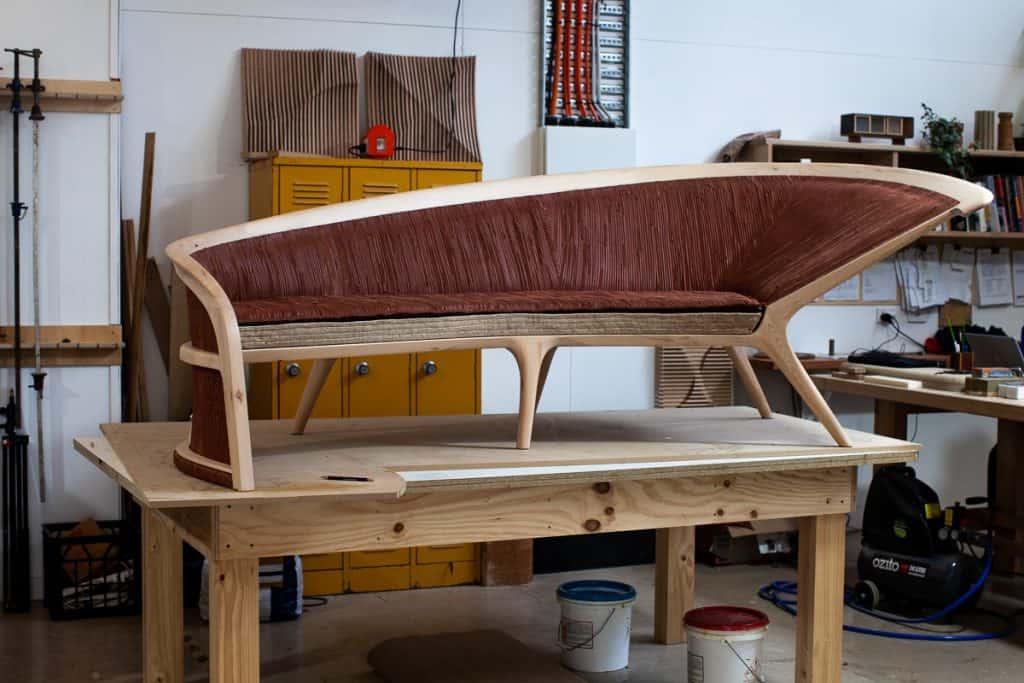 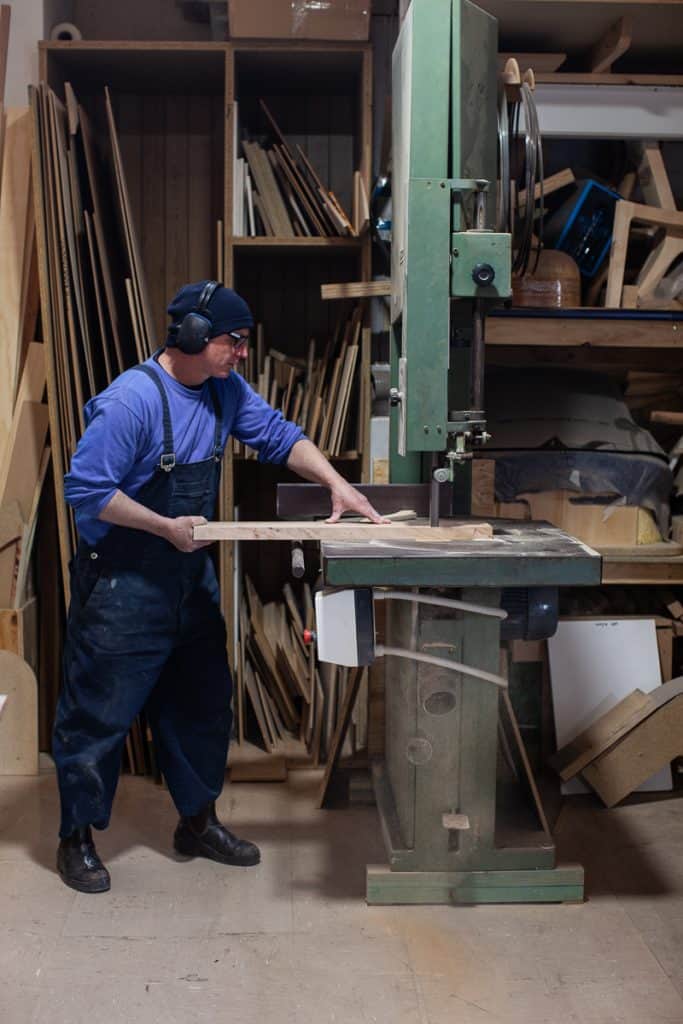 The latest Broached Commission is a profound furniture series by Jon Goulder, which expresses the evolution of craft over four generations. We delve into his collaboration with weaver Liz Williamson.

Jon Goulder is a fourth-generation Australian furniture maker. He left the family workshop and trained in furniture at the ANU School of Art under George Ingham. As manufacturing has declined, he is now the only remaining family continuing this craft, though in bespoke practice rather than industry. His Credenza and Chaise Lounge respond to the memories of his family’s workhop and the kind of furniture they made and repaired.

Broached Commissions assembled a team to collaborate with Goulder. The leather was supplied by Kvadrat Maharam and the motif designed by John Warwicker. We focus here on Liz Williamson, who wove the leather to produce the seat for the chaise lounge and the wool mohair fabric and leather for the credenza. Her reflections on this process reveal the fertile dialogue that underpinned this remarkable work. 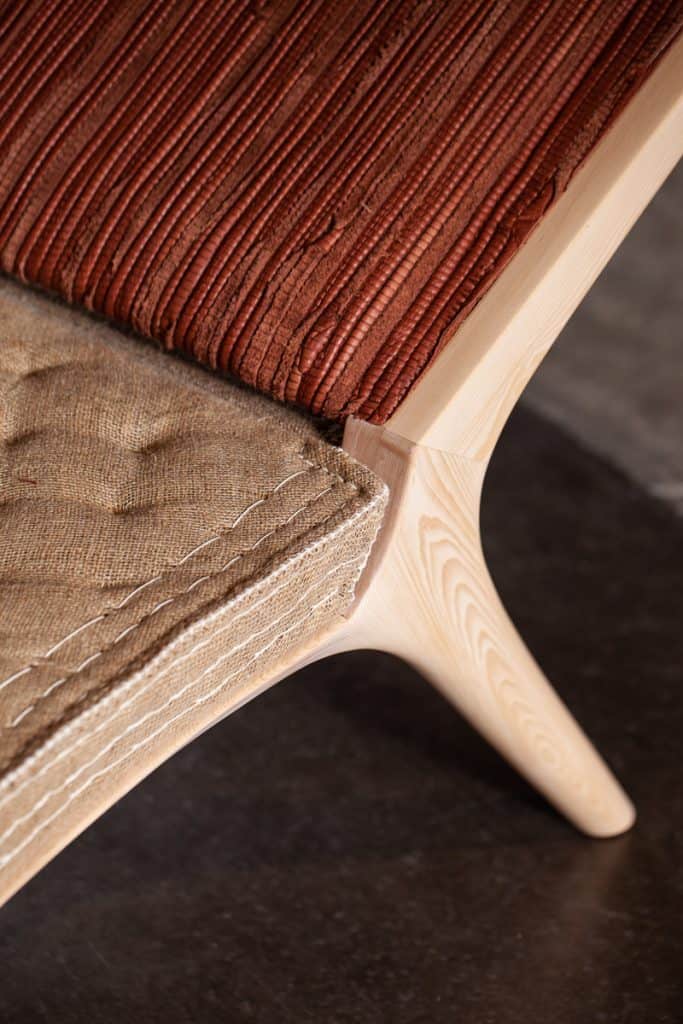 ✿  How specific was Jon about what he wanted?

Jon came up with lots of designs over the period of discussions since the end of 2017. Jon loved the studio and watching the loom in action. Interestingly in the exhibition information he does acknowledge that the studio and loom are reflected in the designs and I can see this especially the shafts on the Sheridan (dobby) loom. He loved seeing the piles of stuff in the studio, including experiments in my studio and woven ideas and also the shelves of yarns. He particularly loved a belt I had woven with strips of leather for Prue Acton, a fashion designer based in Melbourne, at the end of my time at RMIT (1984).

Jon was always open to suggestions, possibilities and recommendations. He was good to work with. Over the whole time I’ve woven many, many, many samples of extremely different materials—different types of leather, different types of old style fabrics similar to those used in the family business; also jute that is used for upholstery. Most of the experiments for the chaise were with leather and referenced rag rug weaving which I acknowledge in my work.  I was very keen to use plant dyes especially some of the eucalyptus from around the Bowral areas.

✿  Were there particular challenges in the weaving?

Not technically as the actual weave structures were straight forward especially for the leather weaving. It was the quantity (15 plus metres) and the density of the leather weaving that was a challenge and demanding on the body as I had to beat so hard to get the leather strips into place. With the firm beating, the loom kept moving and I was getting trapped between the loom and table! The leather weaving for the credenza was straightforward and I think looks amazing on the final piece. The mohair fabric for the other credenza was a challenge as they selected yarns from my shelves, then I had to get mohair to match!

✿ Have you made other work for people to sit on?

I designed quite a lot of wool furnishing fabrics when I first left RMIT, for Bute Fabrics and Norwellan Textiles in Melbourne;  Inmaterial, Integral Fabrics and Living Fabrics all here in Sydney and these went into commercial production. I worked as a freelance designer for Arkitex, a company here in Sydney in the early 90’s on a wool range called ‘Woolahra”. I also designed Jacquard fabric for the NSW Government house refurbishment project 2006 to 2007. Jacquard fabric for two chairs was woven in Montreal at the weaving centre I visited regularly from 1998 to about 2008.

Here are two of Jon Goulder’s works in the Broached Commission series with accompanying text from Lou Weis. 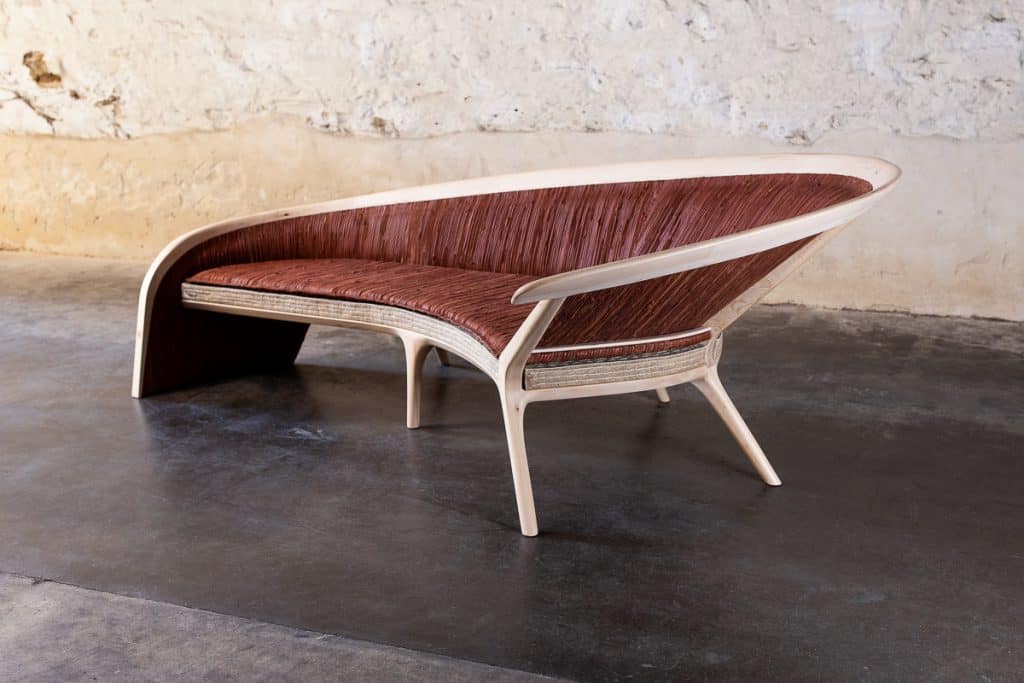 The Broached Goulder chaise is an exorcism of an aesthetic stain Jon feels deeply. He grew to loathe the rigid formality and decorative language of the Victorian chaise, which hung like split open salamis from the walls of the Goulder workshop. This chaise is faithful to Jon’s childhood memory whilst correcting the parts he liked least. It is an act of love for a place now gone, whilst not committing the mistake of placing nostalgia into form. The memories are bound up in each rolled strip of leather, so tenderly woven together by Liz Williamson. The line of the chaise is designed not with the formality of the Victorian era in mind, but contemporary ergonomics. 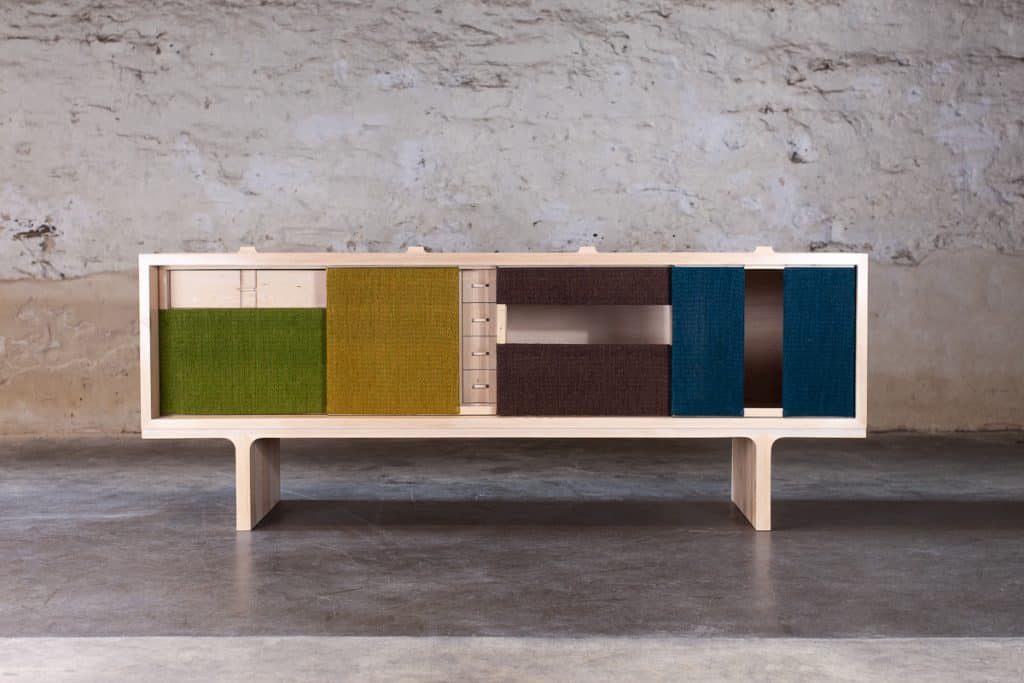 The credenza takes its inspiration from a weaving loom. The top of the four doors represents an integrated shuttle and breast beam. This homage to the arts and crafts movement is layered with a nod to the four Generations of Goulder cabinetmakers represented via the four panels, covered in woven material (leather or fabric) with apertures revealing four drawers. The credenza is a playful exercise resulting from research into the various design periods covered by the Goulder family over the decades and the practical time spent by the side of Liz Williamson’s loom, which was used to create the textile art within this furniture collection.

The collection will launch at Kvadrat Maharam in Sydney on 31st October 2019 and on display until 14 November.