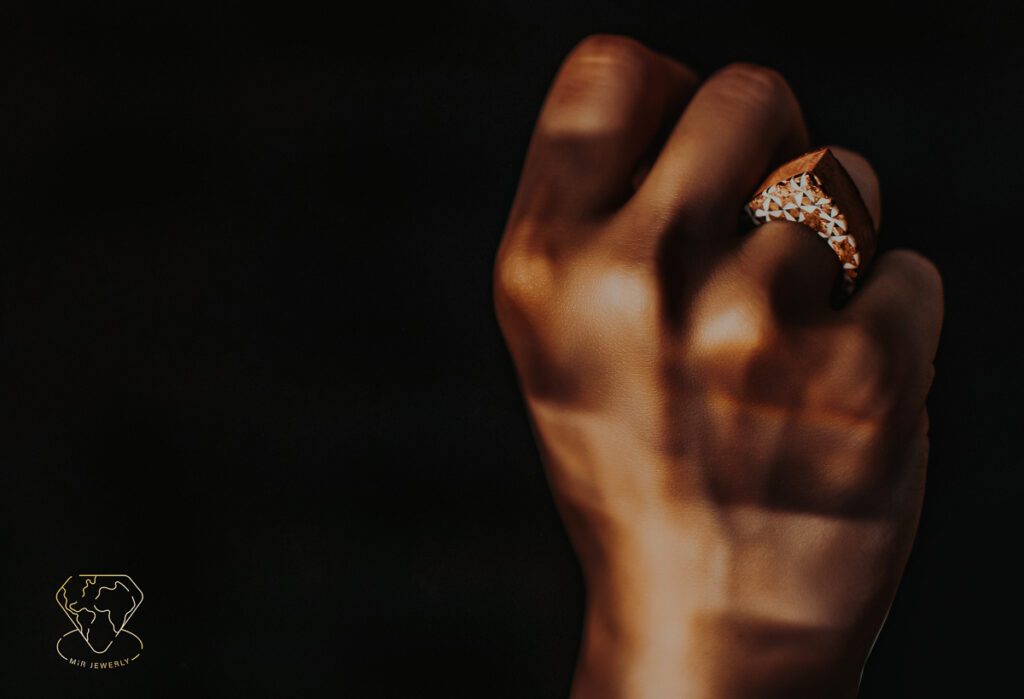 An Iranian jeweller makes precious adornment out of pieces leftover from the traditional wood mosaic craft of khatam.

The story of my wooden jewellery started right in my sophomore year. Since I have always loved nature, especially wood for its great scent and colours, I spent so much time in the wood studio without realizing how time flies. At first, I learned the basic techniques of woodwork. That is when the wood waste grabbed my attention. All those small wasted pieces of wood made me sad, so I started to gather the wood waste from all around the studio. I took them home and started to create designs with their colours and patterns. I should mention the fact that, besides handicraft, jewellery design has always been a great interest for me. Therefore, a combination of interests and nature concerns took place in my mind and led to the creation of a pair of carved walnut earrings. This was my starting point. 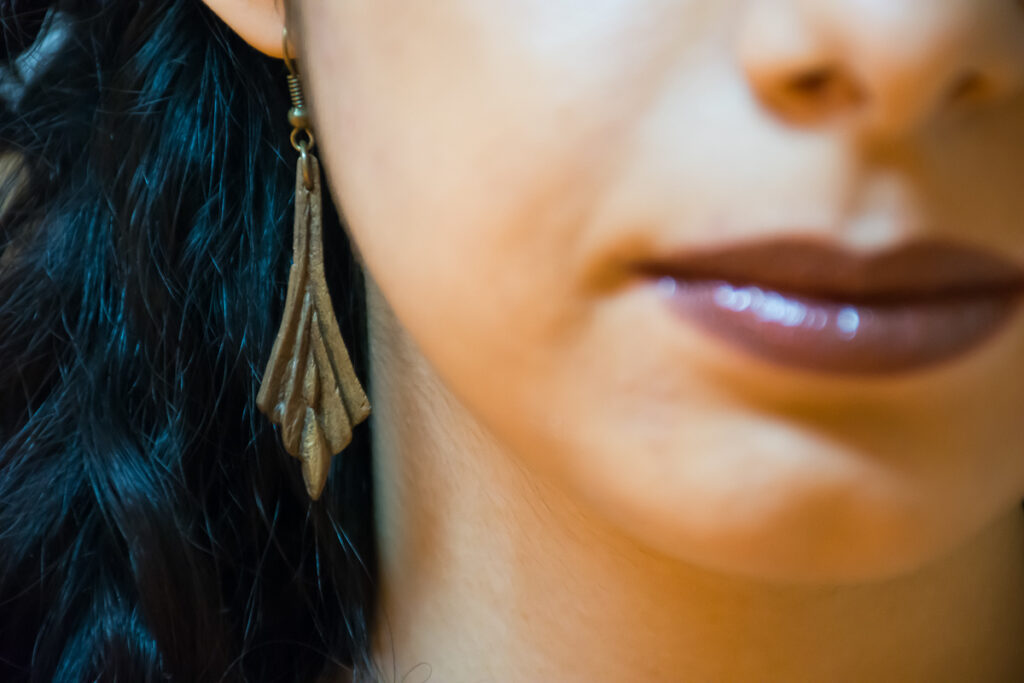 Two months later, when I went to the National Cultural Heritage Organization for some paperwork, in the exhibition section, I saw a Khatam-Kari master making a magnificent khatam table. Many small pieces of khatam had fallen on the ground which were apparently useless. The master explained since the pieces are too small and cannot be measured, he cannot use them anymore. I asked for his permission to take those pieces. Although he was so surprised and wondering, he gave me permission and I took the khatam pieces home.

The next two months, I woke up every day wondering how I could use the pieces. I tried so many patterns and visualised many designs. Finally, I decided to make ornaments with ancient motifs and a combination of techniques such as wood carving, wood mosaic, khatam. The result was the creation of a work called Behshid which paved my way to Group Exhibition in Linda Farrell Gallery, Paris-2017 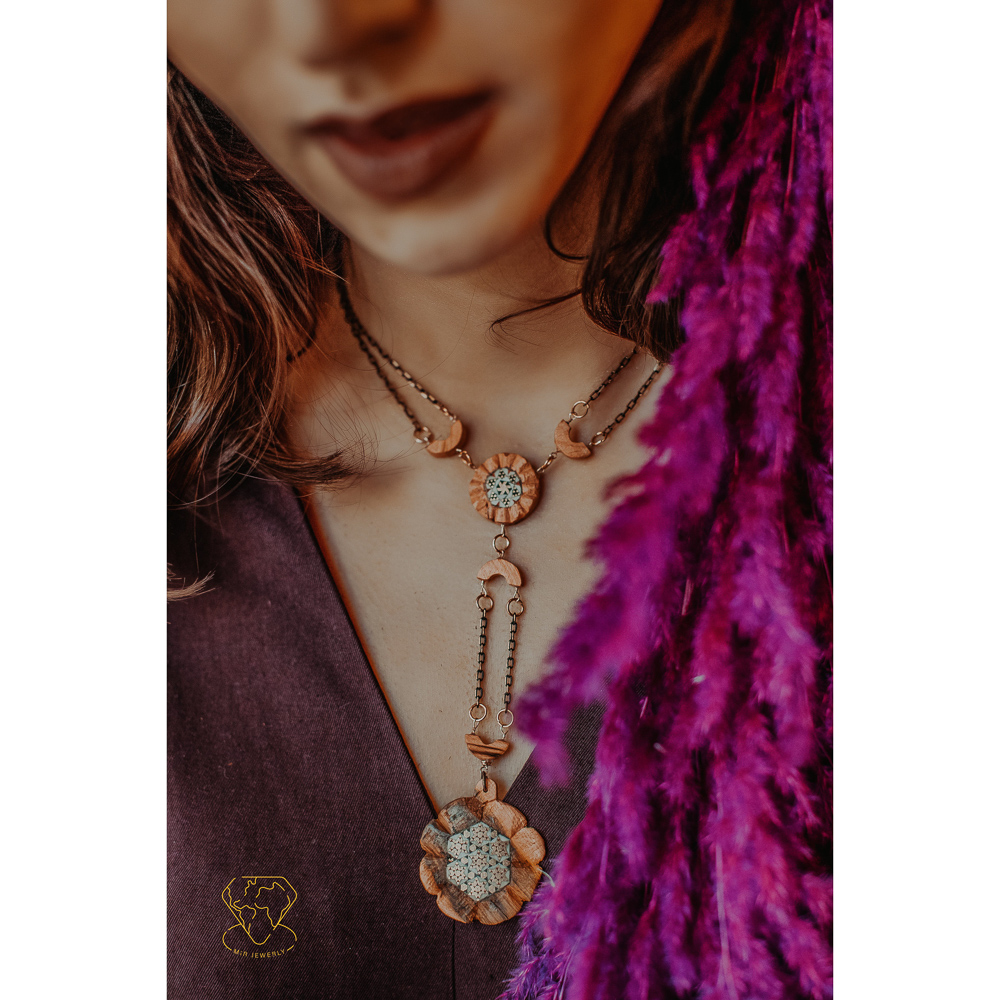 To me, Behshid (meaning the “best light”), is like a girl with ancient origins. She is made of Acacia wood: the khatam sun in her heart is dazzling. In her design, a symbolic lilac flower combined with embossed plastering, dating back to Sassanid’s period, and the commonly-used Iranian hexagon architecture is seen. Behshid has two small and big flowers which are the representatives of the moon and the sun that have joined hands like they are supposed to live for the earth for eternity. 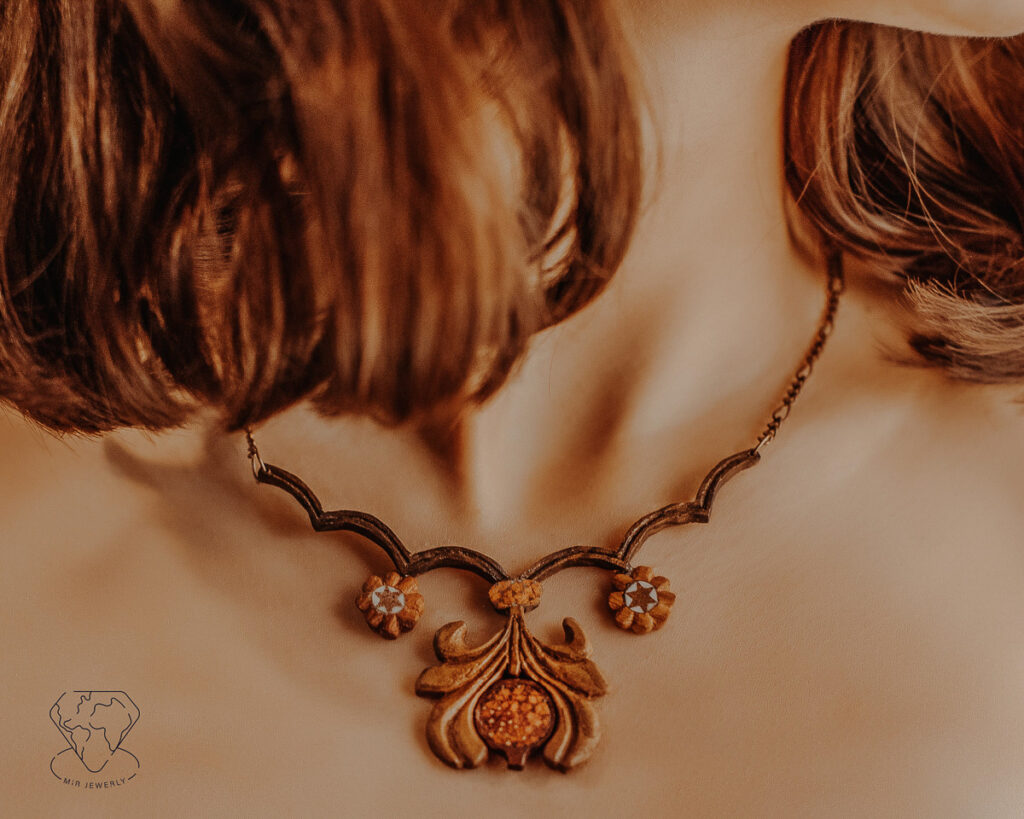 My second work was Vorta that won 3rd Prize in the Third Group Exhibition of “Persian Motifs in The Jewellery & Fashion Design”,  which was organised by Faam Gallery in London (2-28th of November 2017) at the Posk Gallery. Vorta, as its name represents, is a flower-based design with a beautiful pomegranate shape in the middle of its leaves. Its stems are made of walnut wood, its flowers are African paddock and the pomegranate leaves are made of beech. The pomegranate itself is a combination of jujube and Khatam. Vorta originates from the earth and grows like a tree. Its khatam pieces sparkle like stars in the sky and make Vorta shine everywhere.

My passion for jewellery led me to take courses in other materials such as pottery and glass with a jewellery design approach. Another event pushed my collection in a new direction.

One day I went to my Professor’s studio for some information about the traditional method of making khatam and I saw a pile of wood pieces which were waste from the container that the master was making. I took those pieces for my new collection Pieces of earth, Pieces of life.  This collection had two parts and was achieved with two inverse functions. The first part was just sketches of the design and the parts making had been thought of in advance. In the second part wood segments were ready to be designed and how to put them together to create a pattern was the main challenge. Eventually, Pieces of earth, Pieces of life was selected for the 2019 Fajr Festival. Here are three works of this collection: 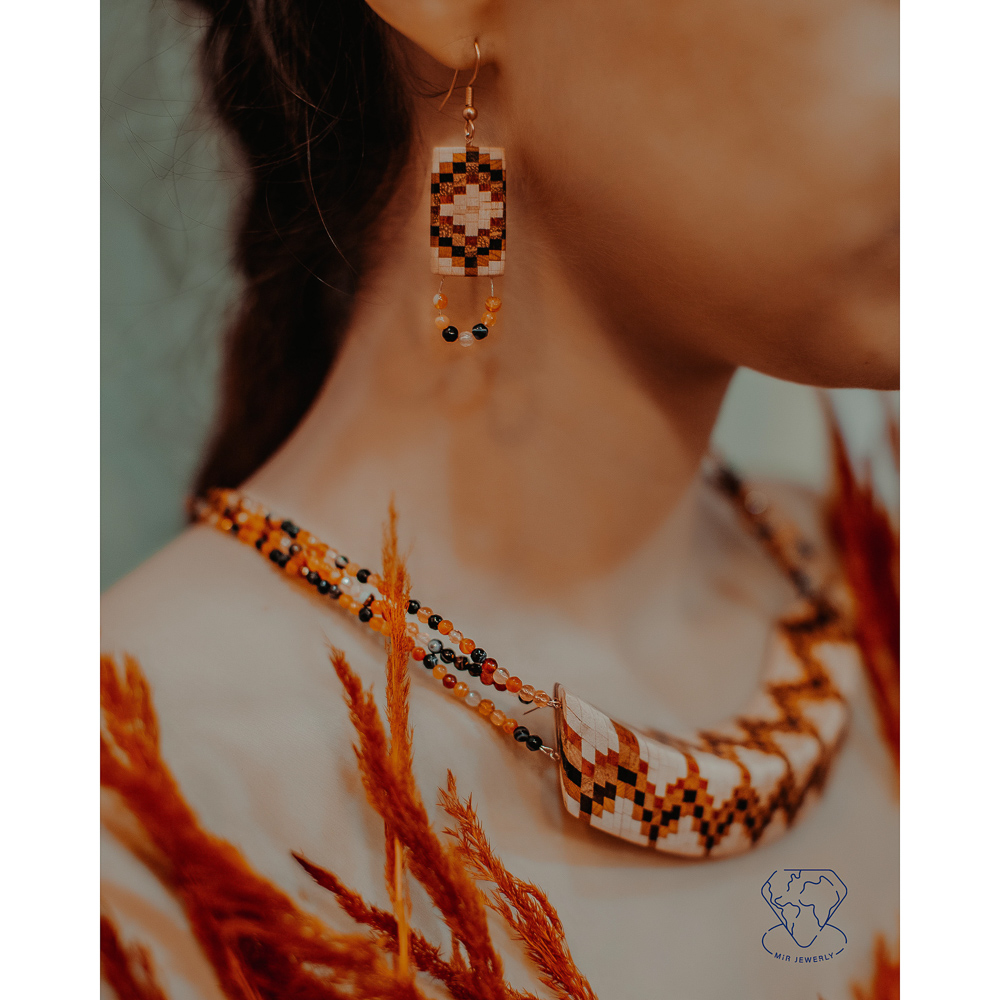 “Golestan region” which is inspired by Dalmutsch’s pattern, is designed by carpet patterns. The design is inspired by Turkmen people and the nature in which they live. For instance, the lacquer colour that can be seen in many weaves is derived from the red grains which grow mostly in that area. The important point is that the designs (patterns) are one unit, but just like in the weaving technique (half roll) of Turkmen rural carpets, these designs seem to be 1.5 units. The cutting angles of the wood in this work has created the same beauty using wood segmentation technique as a warp and weft. 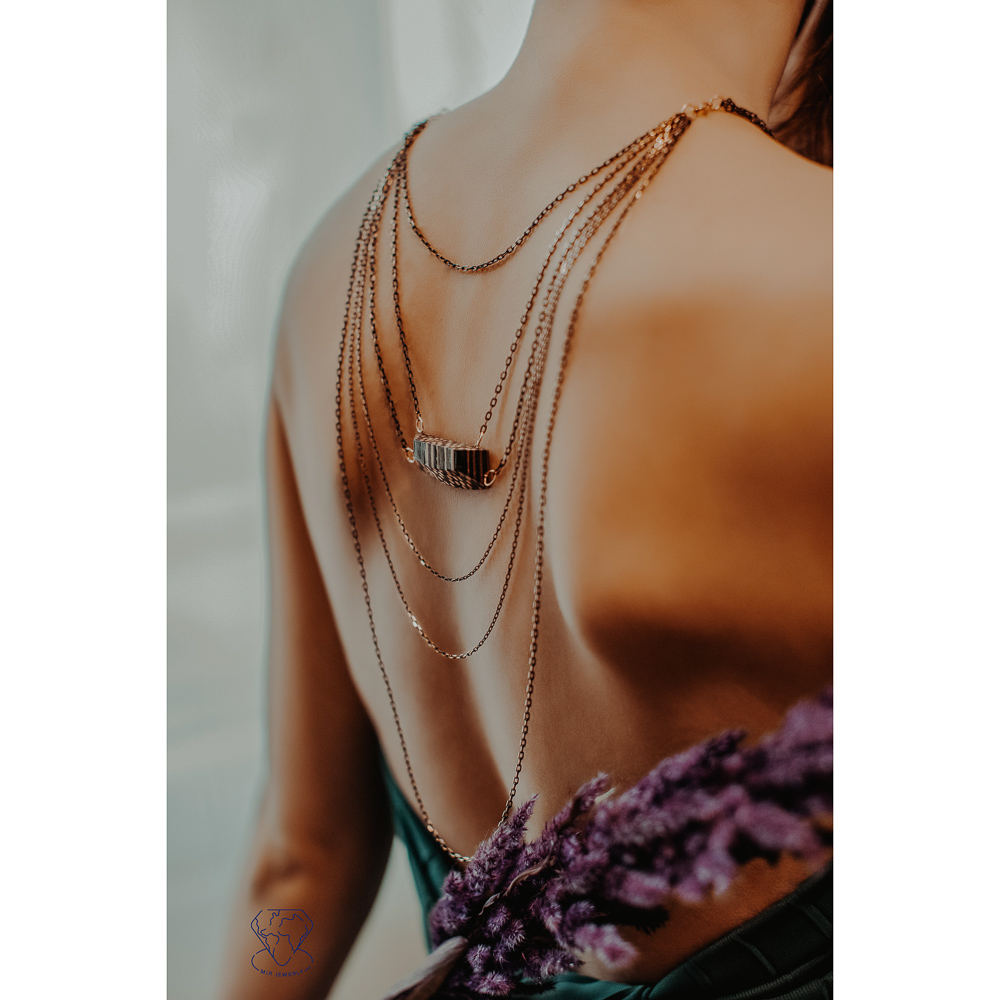 “Turkmen girl” is inspired by the “Ak-Gozi and Turkoman Yemooti” pattern. It looks at woven (carpet) from the back, looking for stories behind the loom. Golestan owes much to the efforts of women and girls artists who painted a picture of love with every thread. This work was also built using wood segmentation technique as a warp and weft. Each cube consists of 49. pieces and in total, it consists of 343 pieces of wood. 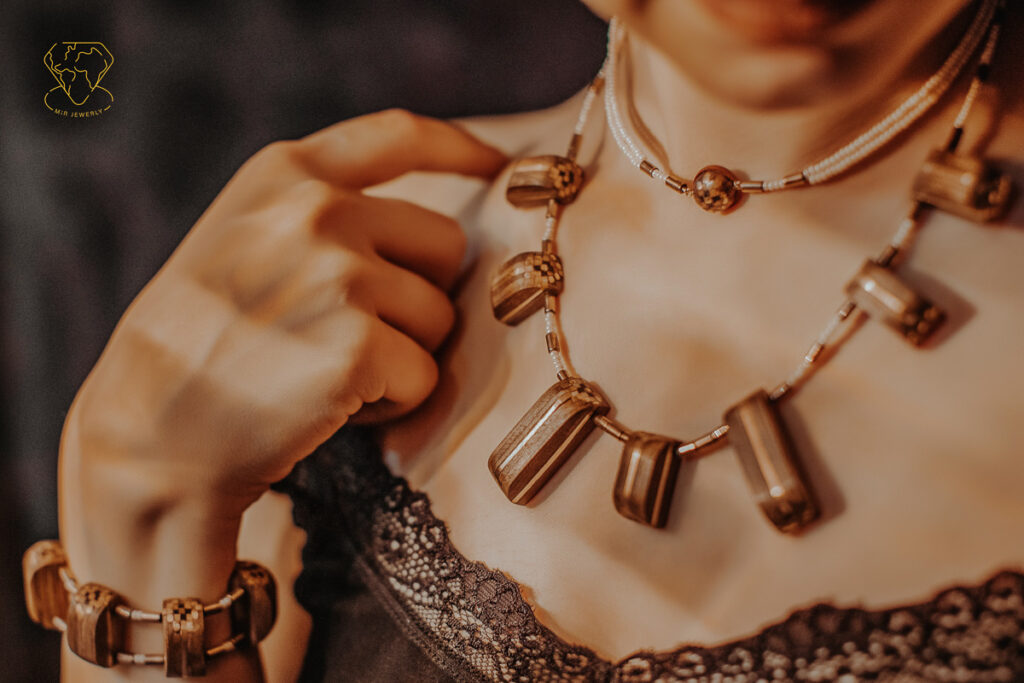 “The Moon” consists of khatam cubes, a technique which was formed in the Safavid period in Iran. The carved hemisphere in the centre of the necklace represents the moon: the only satellite of Earth that brightens the Earth overnight by reflecting sunlight. Also, the pieces of brass that sparkle look like twinkling stars. There are seven concentric pieces of khatam cubes around it which remind us of the miracle or the importance of the number seven. 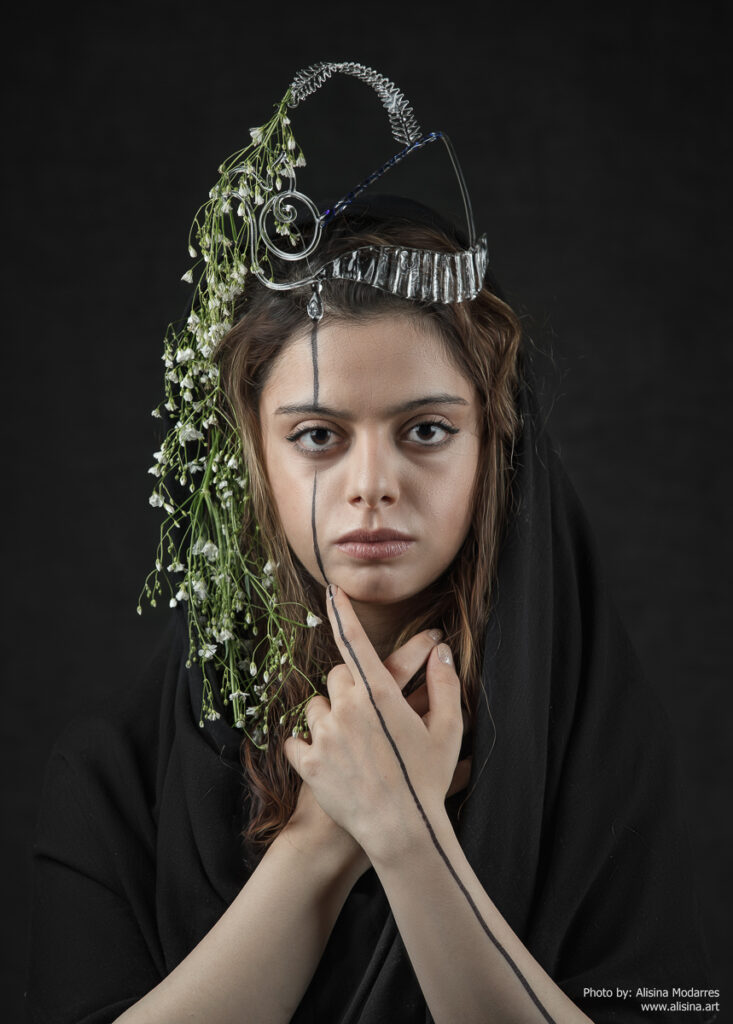 Meanwhile, the call for the London 2020 exhibition was announced and I was designing a glass (pic:7) crown at the time. Before migrating to Russia, I finished the design and the crown was made by my master. Apgrodite was ready to shine in London. I called the crown Aphrodite because it is a representation for each and every woman on the earth. Woman is the symbol of fertility; she is the goddess of love. Like the glass, her existence is limpid, solid, yet fragile. The design is based on Fibonacci golden ratios. I am not going to explain the design. I am just giving you the insight to understand the nature of it. The impression is with you.

Here I tried to briefly explain how my concern for nature and my interest in jewellery design led me to create noble wooden jewellery and simultaneously reviving some ancient techniques. I really appreciate the time and attention you devoted to this story.

I am a Persian girl from Iran and born in 1994. I received my Bachelor of Craft (a specialty of wooden jewellery) from Tehran University of Art in 2017. In 2019 I got a scholarship from Russia and now I’m a Master 0f Arts and Folk Trades student at Saint Petersburg State University of Industrial Technologies and Design. In the last seven years, I have done many activities in the field of handicrafts and jewellery. I have always been interested in being inspired by traditional handicrafts and applying them with a recreating approach to contemporary jewellery. In my works, I have tried to make a connection between the traditional world of Iran and its modern one which has led to creative handicrafts. You can follow here at @mscraftland.