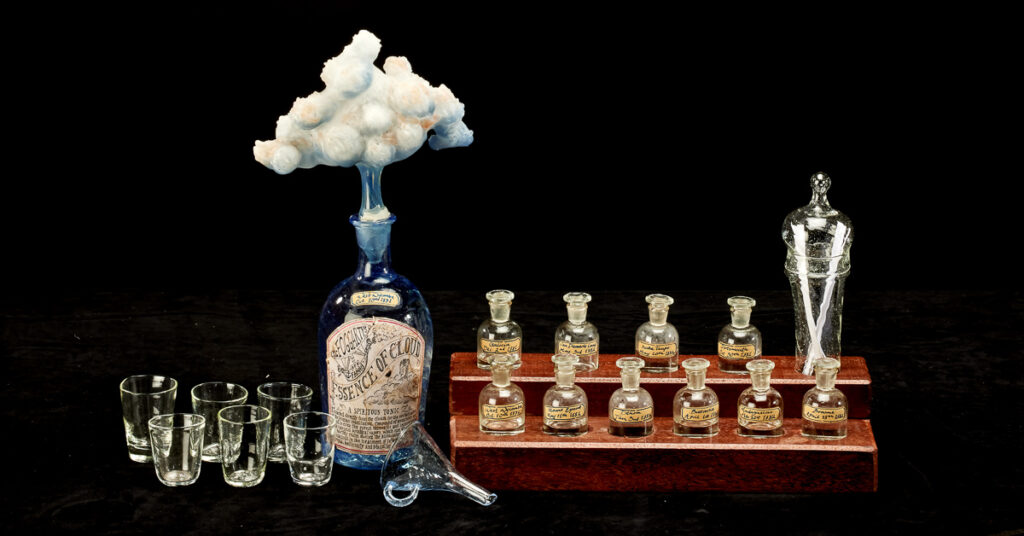 Grace Cochrane recounts the quest to extract the essence of clouds as revealed in the exhibition by glass artist Mark Eliott.

This extraordinary exhibition of flame-worked glass and other processes and materials, which crosses time and place, fantasy and reality, is underpinned by an equally extraordinary story of the research that went into it. The exhibited works are made by long-experienced artist and saxophonist, Mark Eliott, in some cases collaborating with colleagues whose assistance he gratefully acknowledges. In fact, many of the objects in the exhibition appear to be some of the evidence that turned up in his research along the way, which is explained in fascinating and engaging detail in a novel of the same title. Described as ‘a whimsical tale of intrigue, fantasy and earth repair hovering on the truth,’ it is expected to be published before the exhibition is over.

The exhibition seems to have its origin in a 500-year-old glass form known as the Spanish Trick Glass intended to be an amusement for drinking games, in the Corning Glass Museum in New York. Mark Eliott identified it as a “Cloud Essence extractor” and then researched the idea further for Apparatus for the Extraction of Cloud Essence, a work of his own that was purchased by that museum in 2016 as a result of a project organised by CraftACT.

But what is Cloud Essence? It appears to be “a rare and almost undetectable substance purported to induce subtle yet profound changes in the sniffer or taster; including elation, longevity, insight and most significantly, an increase in empathy towards other living things.” The twenty-first-century research has been carried out by contemporary glass artist Claude (Cloudy-head) Eliott-McFoggarty, who has retraced his family narrative across five centuries and seven countries. It was first unfolded to him by his 1960s hippy grandmother, Dawn, in the environmental context of her garden. She also passed down to him a number of significant family artefacts which provided clues, and Claude was to later revisit some of the locations in that history. 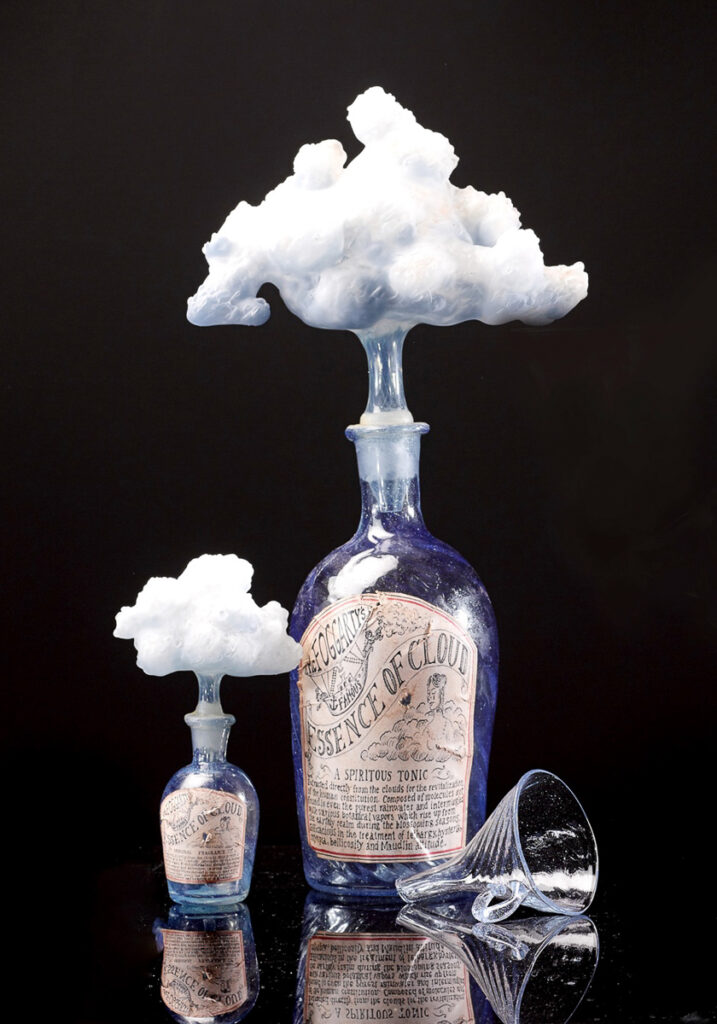 The exhibition uncovers the story of Claude’s research—and dreams (head in clouds?)—in a sequence of events across time, as well as through a number of characters, starting with the temperamental Lonely Goddess of the Clouds in the early sixteenth-century, whose tears created the oceans and gardens of life; to those affected by them, including Bágoas the Monkey whom she appointed caretaker of her “beautiful garden on the land”. Claude’s sixteenth-century Spanish ancestor, Dario Fogartino, and his childhood friend and unrequited love, Antia, saw the Goddess, and he sought to recreate the essence for her group of nuns who explained: “The goddess cries for the pains of the earth, but her tears are not just rainwater, they infuse the clouds with a special essence.  She allows the nuns to collect this substance for therapeutic purposes because they live clean, virtuous lives and perform acts of charity.” They believed that “when given a sniff of this substance, human beings would renounce their warlike ways and return to being caretakers of the garden of the cloud goddess.”

Dario worked with glassmakers to extract and store the essence for them, despite the nuns’ concern: “So how is this gangly youth going to find barrels of our precious Cloud essence when the whole nunnery is lucky to collect a single drop in the heaviest storm?” He was apprenticed to an apothecary but his father had shown him some strange “trick glasses” made by Gianni, a Venetian-born master glassblower in Lisboa in Portugal, so he embarked on journeys including commissioning Gianni to make his own trick glass to be used as the basis for a “cloud essence extractor” which he took back to Antia and the nuns, within a box he had carved himself. 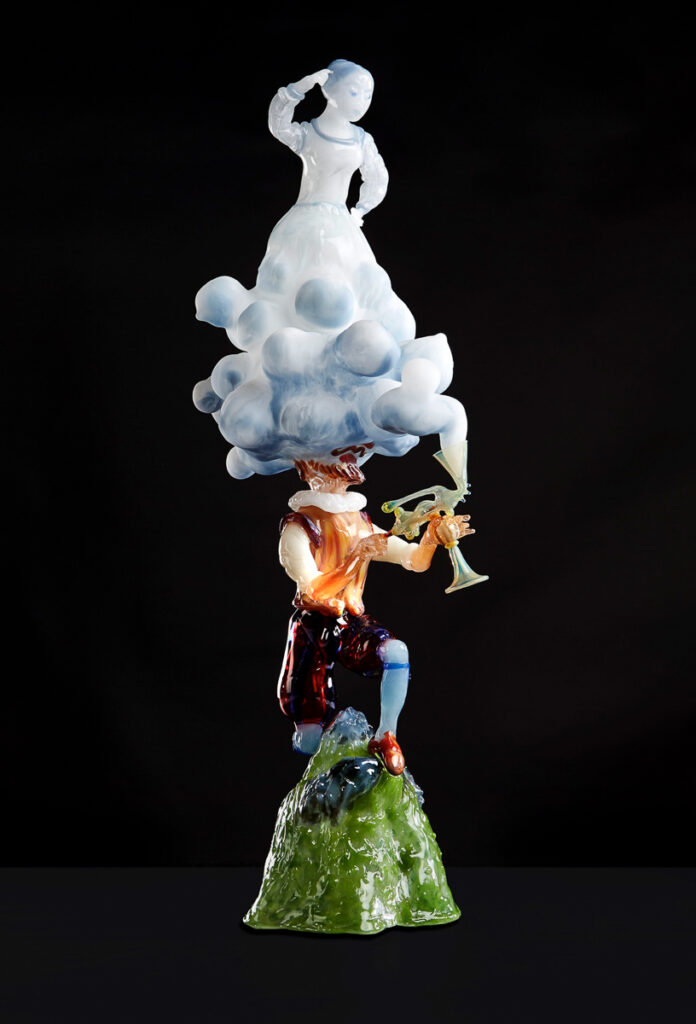 He was soon forced to join the Spanish Armada, sailing in the galleon Santa Emilia, only to be wrecked in 1588 on the coast of Ireland at Flaggy Shore in Galway Bay, near the village of Ballyvaughan. His carved box was to save his life when he clung to it while reaching the shore. Here he met Neave, and for anonymity changed his name to Darragh O’Foggarty as her second cousin and a deaf-mute. With a small group of Armada survivors from the wrecks, and accompanied by Neave, now his wife, he moved further to a safe haven in Scotland where he changed his name yet again to Darach McFoggarty. Neave McFoggarty was to bear six children and Dario made wood carvings in their cottage.

Two hundred years on, their great-great-grandson, naturalist Professor Hamish McFoggarty appeared in West Wycombe in the 1880s, where he began to revisit his ancestor’s research and experienced a glimpse of the “majestic cloud woman” and a “cloud collision”. Hamish worked closely with his cousin Ferdinand McFoggarty, and Ferdinand’s future wife, painter Vanessa Winthrop. Claude learnt from his grandmother that Ferdinand and Vanessa were his great-great-grandparents, and Hamish his great-great-uncle. “When they were not gardening, the two men spent innumerable hours attempting a repetition of the professor’s cloud collision experience.” It turned out that Professor Hamish McFoggarty invented a Floating Cloud Laboratory (known as Lucy), based on Count Von Zeppelin’s airship invention, which was launched on May 9th 1881 in “jubilant springtime” where “the sky was suitably adorned with a swirling mass of deep-grey, pregnant looking cloud formations.”

Intriguing later, to Claude, was the discovery of “a leather-bound ship’s logbook … Mostly it was legible except where moisture, wet weather perhaps, has blurred the ink. The log (and labels on recovered scent bottles) recorded episodes of an extraordinary journey undertaken by Professor Hamish McFoggarty.” This journey from West Wycombe in 1881-1882 included Portsmouth, Galicia, Dehra Jan (Rishikesh), Madagascar, Batavia (Jakarta), as well as Broome, Brisbane and  Van Dieman’s Land (Tasmania) in Australia, and Lake Taupo and Mount Egmont (Taranaki) in New Zealand. Ferdinand and Vanessa followed to Australia and New Zealand by land and sea, but the regular communication through the telegraph or large boards from earth to clouds broke off and it appeared the Professor and his Floating Cloud Laboratory had vanished. But in Brisbane, Ferdinand discovered: “And look! A mystery airship of unknown provenance was sighted in that region by a farmer some six weeks prior.” 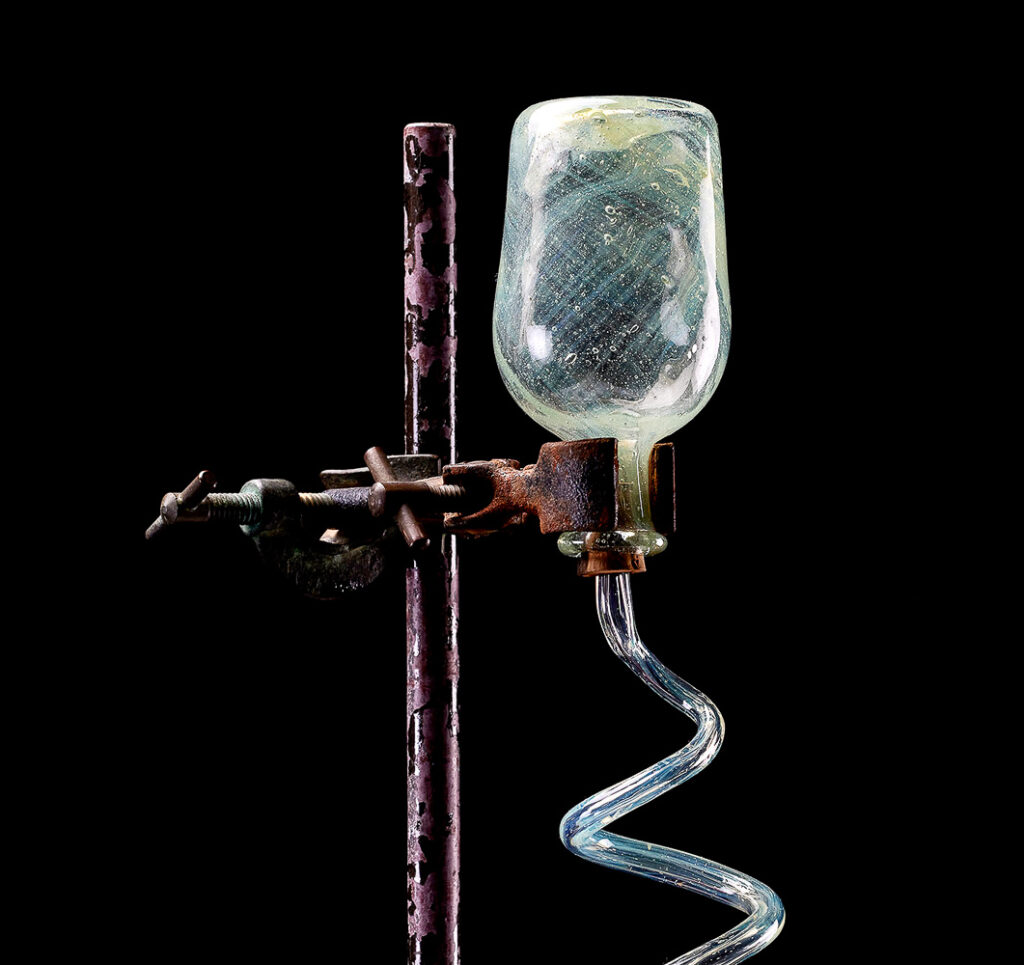 While the professor and his floating laboratory vanished into the clouds, “some years later the airship’s weather-worn logbook, the empty apparatus box, the microscope, a box full of glass instruments and incredibly, a chest of full, unbroken cloud essence bottles were found by explorer Thomas Dawson neatly set down next to the remnants of a campfire in a cave behind a waterfall on the slopes of Taranaki, Mount Egmont.” Ferdinand and Vanessa retrieved them; these bottles had previously precipitated a profound change in the style of Ferdinand’s glassblowing demonstrations.  With the addition of Vanessa’s efforts, they had developed into full-blown “Glass Cloud making demonstrations” and gained considerable fame on the London scientific entertainment circuit and beyond to the major’s cities of Britain.” And over 100 years on, in a leather bag with a small stack of tattered books and loose pages passed on from his grandmother, Claude Eliott-McFoggarty found “a faded navy-blue diary with cloth binding and marbled inside cover” under the name Vanessa Winthrop. “The pages revealed copious notes and loose sketches including faces, landscapes, animals, plants and a strange-looking dirigible balloon.”

As a glass artist in the twenty-first-century, Claude felt a strong commitment to continuing the legacy of his ancestors, and with his grandmother’s help, booked a ticket to Madrid, visiting on the way glassblower “Sgt. Pepper”, an American pipe maker well known for his colourful glass smoking paraphernalia that made reference to the British Monty Python TV series, the Beatles and 1960s psychedelia and who acknowledged as his main inspiration the “insanely whimsical trick wineglass in the Corning Glass Museum’. Claude decided that he “must become a scientist and develop a technique for extracting cloud essence en masse so that it can be distributed to as many people as possible. Like a vaccine against stupidity, greed and ignorance.” He was unsure how he would carry this out, but” said: ‘It all starts with the trick glass!’  In a dream, he met John Lennon who acknowledged a connection with the song Lucy in the Sky with Diamonds from Sergeant Pepper’s Lonely Hearts Club band, and Paul McCartney’s Fool on the hill which he thought may have had “something to do with a monkey who was a disciple of the Cloud Goddess.” 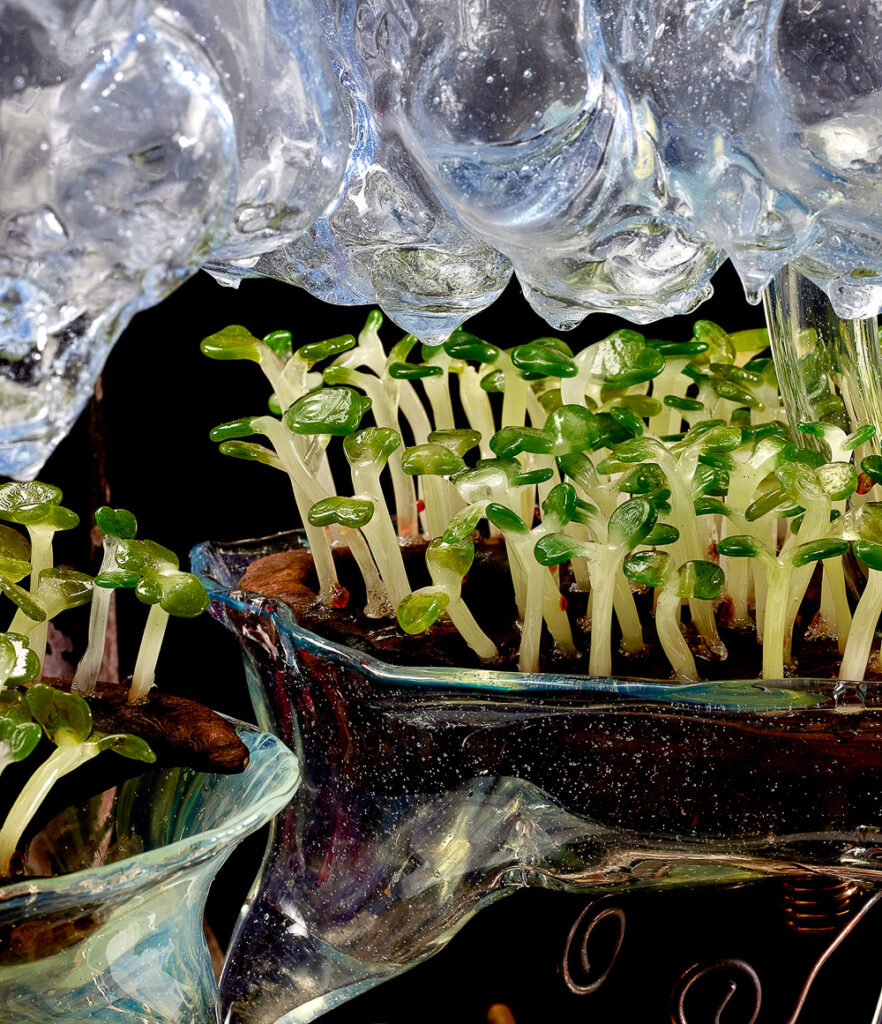 This complex story unfolds through insightful artworks in the exhibition in these sections:

Those attending the opening of the Essence of Cloud exhibition will also have been involved in an impressive physical engagement with the condensation of ‘cloud essence’ and a sniffing/tasting session, offered by Doctor (Claude) Eliott-McFoggarty.

As with all of us, what we do now, and who we are, is an accumulation of experiences along the way: of influences, turning points and changing directions. It is definitely so for Mark Eliott who says: “At the heart of my story is an attempt to understand a basic fact that many people across the world are now rediscovering:  We humans are not a lone island in a sea of lesser life-forms put here for our disposal, but a species needing to collaborate with our neighbours in the greater story of life.”

Congratulations Mark; we are all right behind you!

Quotes are from Mark Eliott, Essence of Cloud, Sydney 2021 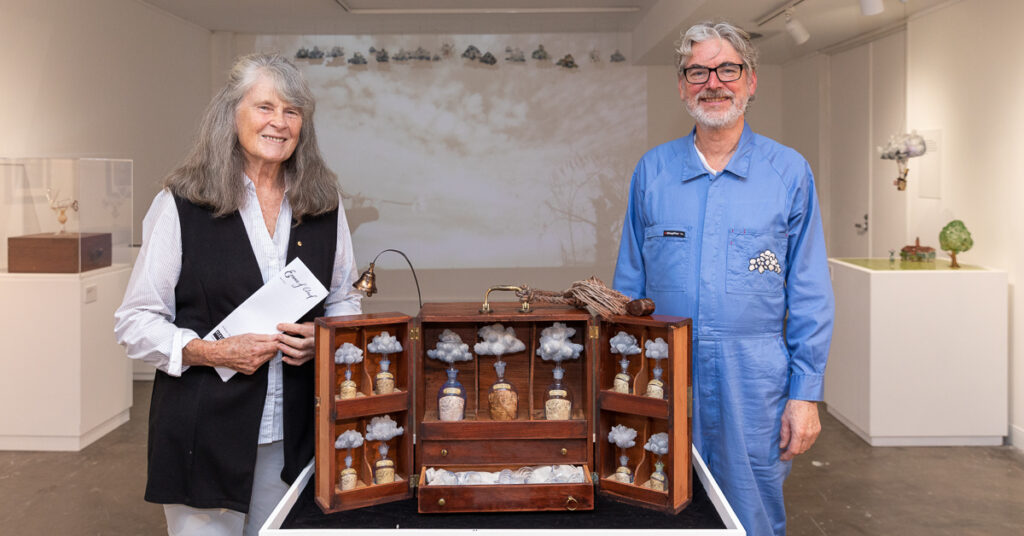 Grace Cochrane AM is a curator, writer, historian and consultant

Mark Eliott would like to thank the following Collaborators and Assistants on this exhibition as well as all others who have kindly provided various kinds of help.