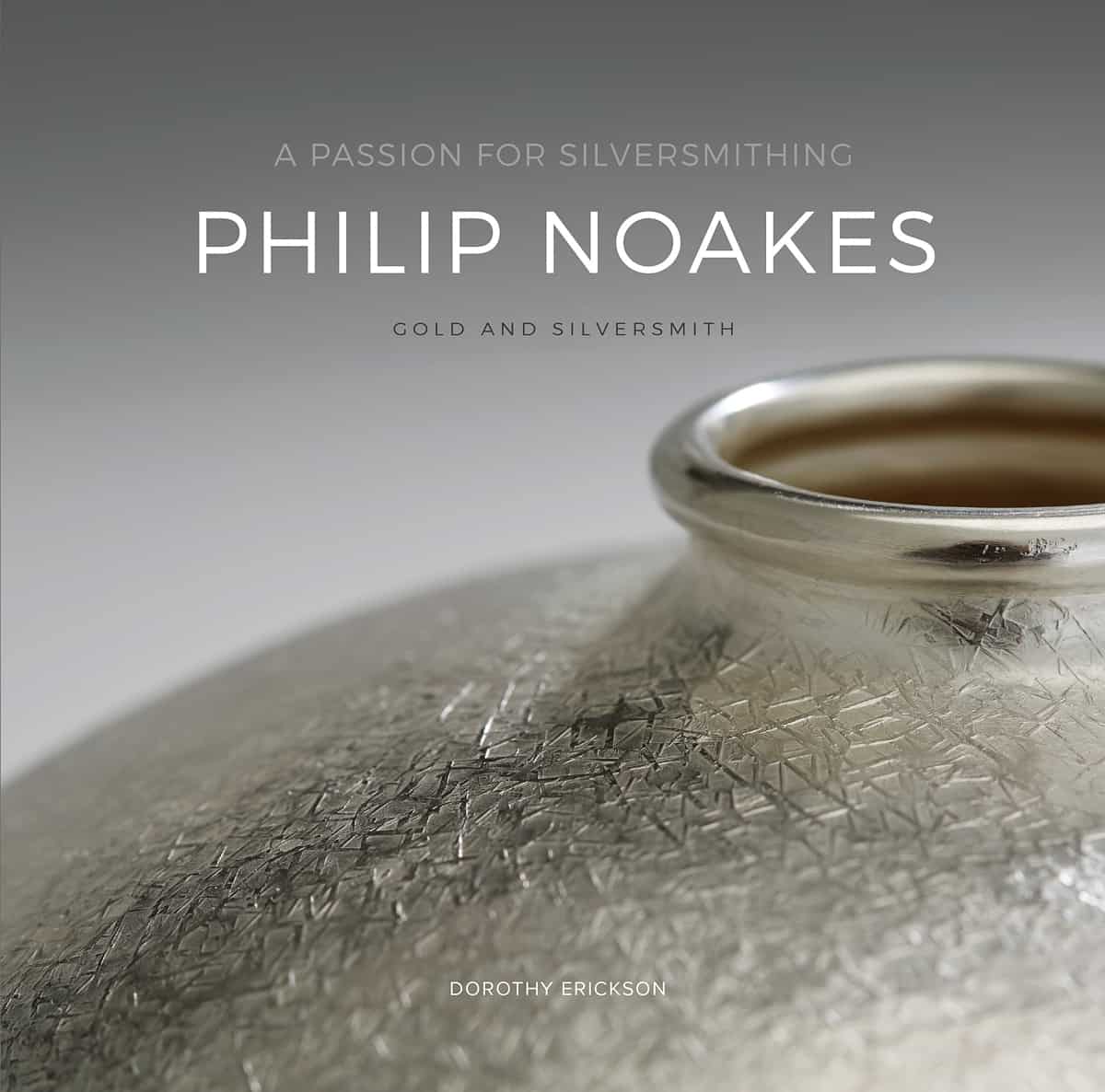 The history of West Australian jewellery is well served by Dorothy Erickson, who has just published another substantial book on one of its leading exponents. The beautifully illustrated book coincides with an epic exhibition of Noakes’ work, set to tour nationally.

Philip Noakes is recognised as one of the outstanding contemporary jewellers, goldsmiths, and silversmiths working in this country. Over many decades he has earned a reputation as a consummate craftsman and a highly original and innovative artist within the expanded world of metal craft. 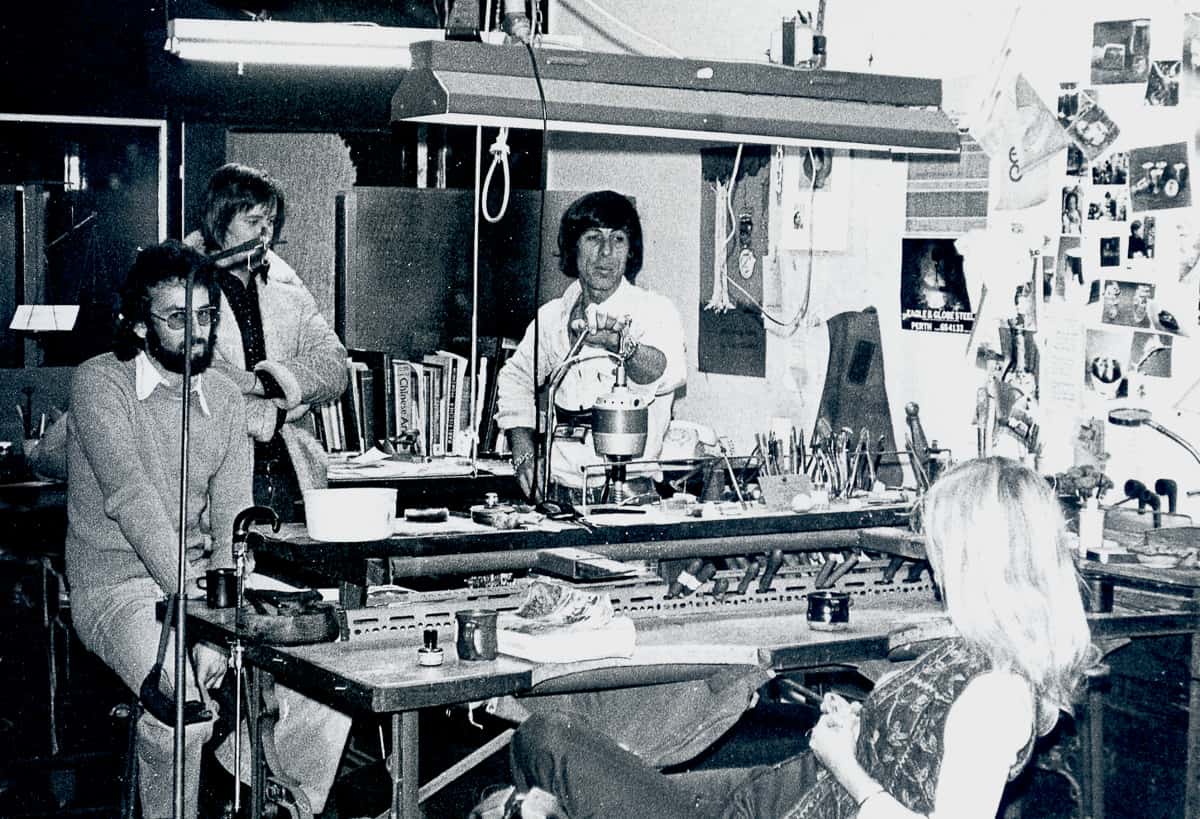 From his early study for the technically demanding four-year full-time Diploma in the Design and Craftsmanship of Silversmithing at Sir John Cass College of Art London in 19721 he has taken opportunities as they arose and initiated them when they didn’t, thus fashioning his practice to be constantly reflexive to the changing environment in which he finds himself. While at ‘The Cass’ Philip remembers the excitement of seeing works by David Hockney, René Magritte, Andy Warhol, Lucie Rie, Hans Coper and Henning Koppel.

Every artist forges their practice from a combination of these chance encounters that coincide with discovered aptitudes and happy accidents. Each does it differently, first succumbing to their impulse to create and then finding impetus through a rigorous process of trial and error, success and abject disappointment, euphoria and dark depression. Where they start is often circumstantial, but where they end up is always hard-won. After exploring a plethora of options available they eventually arrive at a unique place, one they carve out for themselves, even if it remains unresolved. Even so their practice remains forever in a state of flux.

Philip is the archetypical adaptor, highly flexible, using his skills to solve problems and always finding new perspectives from which to recalibrate and reimagine the world he inhabits. He refuses to be constrained by his history. Indeed, he employs his history as a springboard to launch challenging projects and establish creative initiatives, such as Sculptural Silver.

A short précis of his career showcases numerous extraordinary outcomes in tandem with many quirky surprises. Post college he worked alongside Louis Osman, who fabricated the crown for Prince Charles’ investiture as Prince of Wales. Later, when based in Sydney, he created a set of chicken-claw epaulettes for actor Alan Arkin, and this work for the film The Return of Captain Invincible was featured on the cover of Pol magazine in July 1982. He also exhibited with fashion designer Linda Jackson at the Jamieson Street nightclub in the 1980s and, with his then-wife Katherine, he ran the highly regarded Studio Noko in Sydney. In Perth he produced a remarkable line of jewellery showcasing Kailis pearls and, as a teacher, he has transformed the lives of hundreds of students.

After many years of fabricating jewellery, the urge to return to the passion of his early student days as a silversmith and create objects and vessels raised from flat sheets of silver was sparked by a visit to London and a reunion with old classmates from the Sir John Cass College. In 2016, he returned to learn new techniques and build a skill base around the use of new equipment. Once armed with this arsenal of possibilities he began to work in earnest, first with copper maquettes to explore ideas that played with variations of classic forms and then to test how textures would play across these forms.

This miraculous process conjures up beautiful items. His hollow forms are transformed into closed containers, bowls that seem to float and lavish sculptural objects, all with elaborate textures created by hammering, engraving, oxidising and with flame treatments to enliven the surface of each vessel. In developing the works for Philip Noakes: Sculptural Silver his experimentation led him to explore exciting and previously uncharted territory. He tried out new raising techniques, researched the effects of hammering on different metals and experimented with scale through the creation of pieces that were larger than anything he had previously tackled. His raised forms became more adventurous while he concurrently returned to the traditional techniques he had learned as a student.

The monograph A Passion For Silversmithing – Philip Noakes Gold and Silversmith, by Dr Dorothy Erickson and this exhibition at the Lawrence Wilson Gallery document Philip’s contribution as a leading Australian craftsman, a mentor to many and, through his teaching, a conduit to passing on his knowledge, which he does with acknowledged generosity. 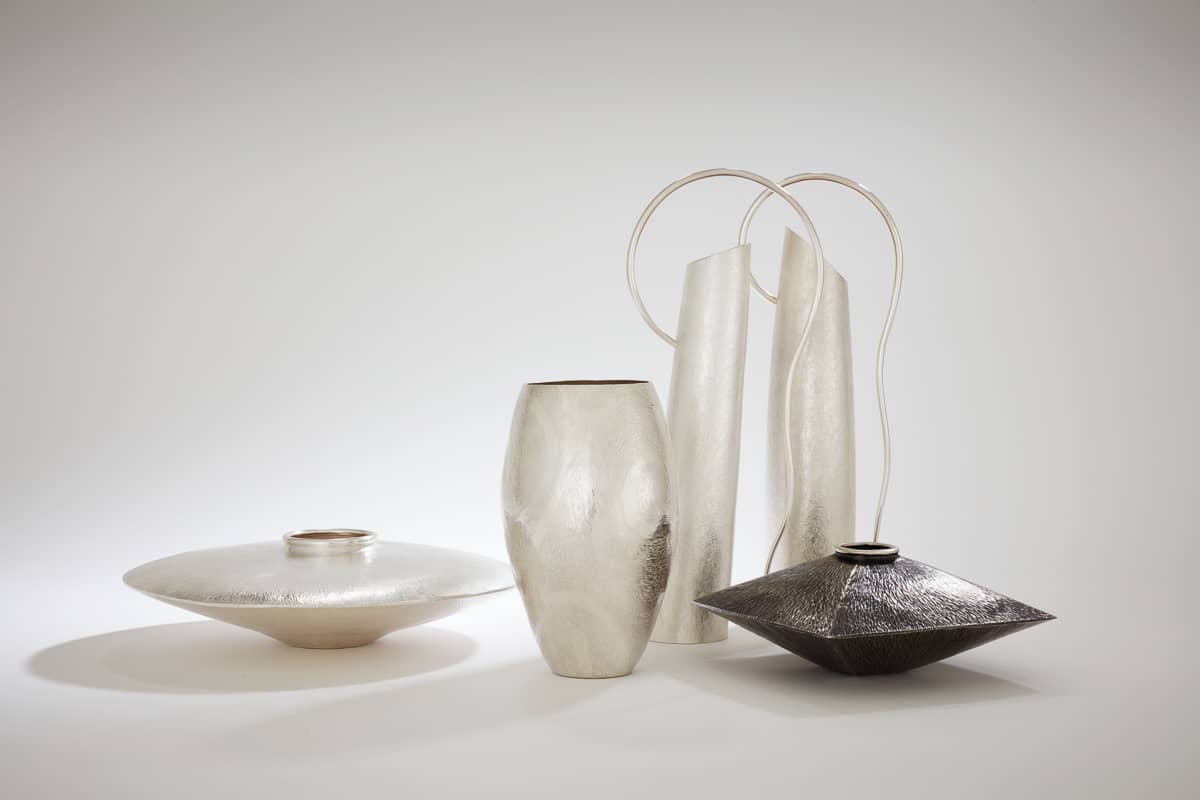 Philip Noakes, A group of pieces displayed in a preview
at the Lawrence Wilson Gallery in 2018. ‘Whirlpool’ centrepiece, ‘Ribbon I’, ‘Crystal Pitchers I’ and ‘II’,
and ‘Cross Grain Dark Pyramid’.

University art galleries have taken a leading role in presenting the work of Australian artists who continue to make a significant contribution to the cultural life of this country. The Lawrence Wilson Gallery is delighted to host Philip in showcasing his Sculptural Silver. As Philip explains, he aims to ‘pursue innovation and excellence while keeping the continuity alive with historical references and contemporary concepts’. In creating this major body of work, he has delved deep into his past, utilised the full range of his present skills and imagined possibilities for future works. 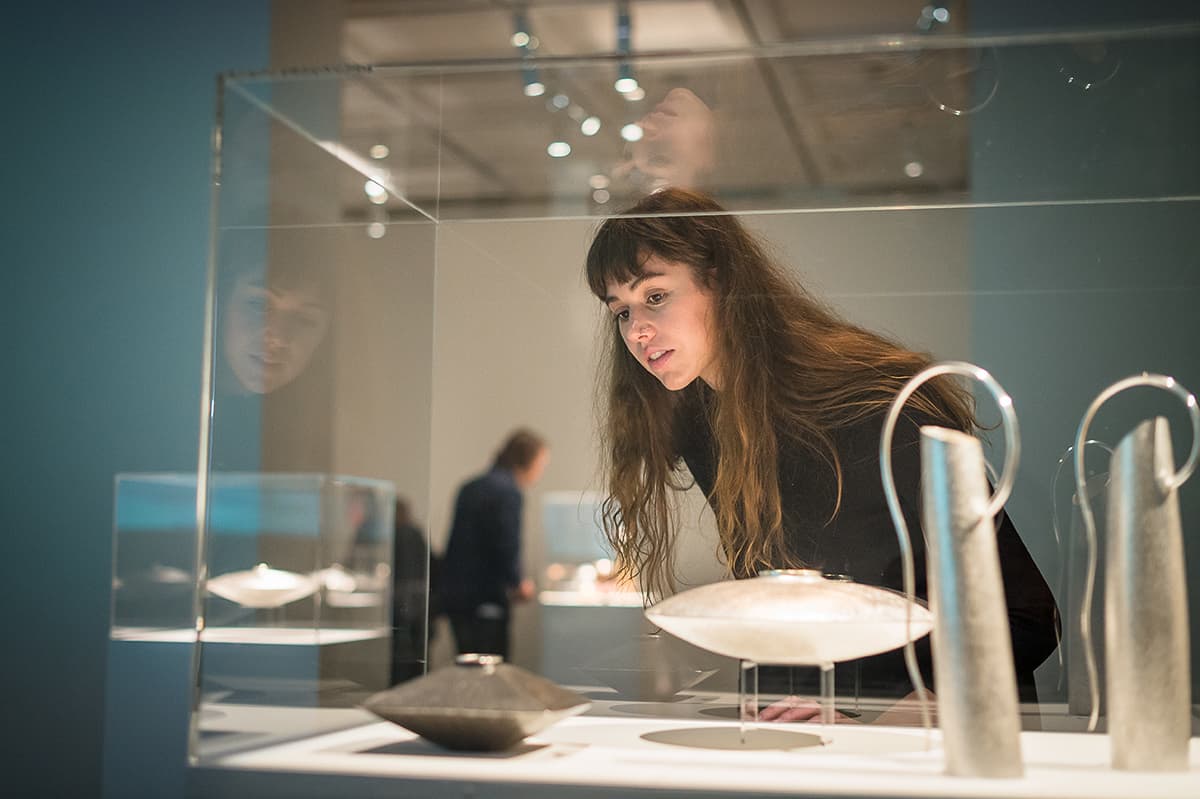 From the first copper and brass candlestick he made in high school, Philip was hooked. He has studied, watched and learned from his peers and taken whatever opportunities arose. Working tirelessly, he has honed his knowledge and developed his formidable armoury of skills. This dedication to his craft and his consummate professionalism have earned him much deserved renown, including the most prestigious accolade of all, Fellow of the Institute of Professional Goldsmiths, United Kingdom, conferred in 2016.

Philip Noakes: Sculptural Silver  at Lawrence Wilson Gallery, 25 May – 17 August 2019. Noakes will be showing new work at Australian Galleries in Sydney in April.

A Passion for Silversmithing, Philip Noakes: Gold and Silversmith by Dorothy Erickson

From Aotearoa to Uzbekistan: New Zealand in the Zar Festival of Gold, Bukhara
Jin ah Jo ✿ A pipeline to Buddha 🇰🇷
Behnaz Barabarian: Love in the Qajar period
Bridget Kennedy ✿ A fragile beauty between the ashes
How to Make a Necklace from a Chair - Sarah Read
Isolation jewels: A well-made life
Divining a new life: Antipodean Encounters in Perth
Punk Rocks ✿ The Hope Pebble