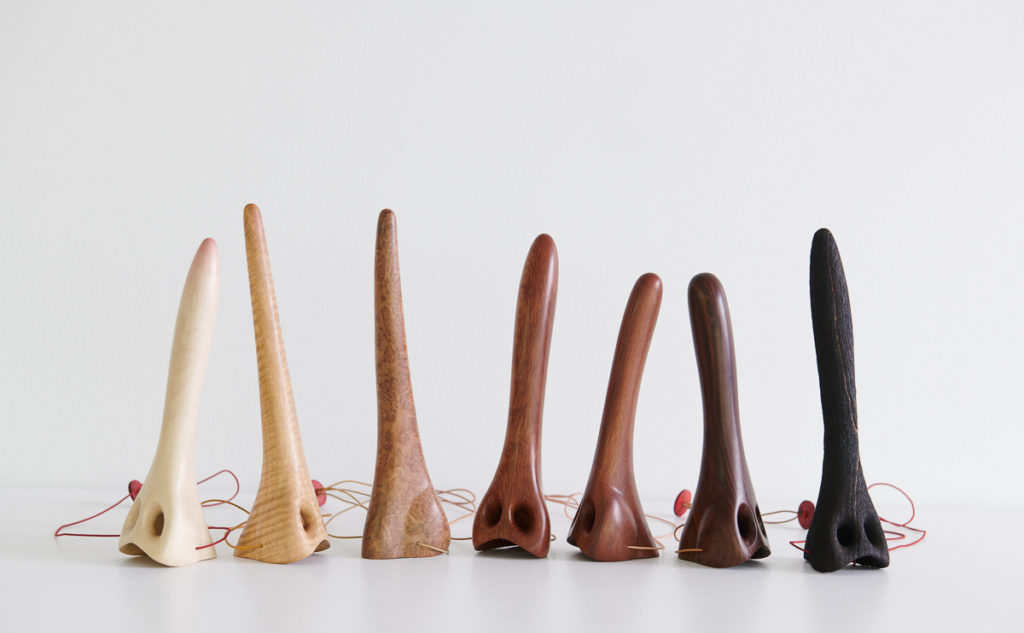 In past times a person’s public appearance was governed by their status in society. The shoes, the clothes, the jewellery and the hats people wore were an indication of who they were and which strata of society they came from.  When societal norms relaxed in the late nineteenth and the early twentieth centuries, people started wearing clothes that more closely resembled their individual identities rather that their class and occupation.  For example, in the 1960s university students started wearing the “uniforms” of their individual belief system and got about in the flowing skirts and kaftans of the flower-power movement, the boots and military coats of the left-leaning politically-engaged student, the preppy neat-shirt-and-skirt of the conservative middle class, or the long hair and scarf of the intellectual. Each attire was an experiment in self-expression and a manifestation of the plurality that makes up modern society.

Fast forward to the digital revolution and the era of social media platforms; today’s makeovers are ever more complex and nuanced affairs relying not only on the physical (surgery, body piercing, tattoos as well as make-up and clothes) but also on the power of the virtual to produce and experiment with a number of looks and personas.  One’s identity is made fluid by the digital medium, photos are doctored and personalities are constructed according to the appeal they will have with their audience.

Identity Makers, a new show by David Bielander at Gallery Funaki, which closed at the end of February, is a meditation on these issues using as a starting point the tale of Pinocchio; a wooden puppet, created by a lowly, kind and moral craftsman, who leaves his caring “father/maker” in search of fun and riches but becomes embroiled in a nightmarish world of misadventures due to his ignorance and naivety.  Bielander has chosen Collodi’s tale, to shed light on the social and political themes of our times: racial prejudice, mass tourism, terrorism, climate change and the extinction of various species.  His Pinocchios, however, are not the puppets of old or the traditional full face masks encountered in the Commedia dell’Arte, where the nose always featured prominently as an indication of character, or even the disguises in the many Carnevales around the world. His Pinocchios are jewellery or more precisely pendants, minimally crafted as a nose on a string, to be worn around the neck and over the face, or maybe not.

The curation of the show at Gallery Funaki allows us to understand the significance of the works as more than playful objects. Individually each nose, in Bielander’s hand, becomes shorthand for the full costume (the identity maker). Collectively, as he is keen to point out, they are a collection that makes a political statement.

Bielander’s first nose is that of Pinocchio. This work is unmistakably European: the fine grain of the wood (maple), the shape and the slight colouring of the tip, turning the wood into flesh (as Pinocchio himself did when he finally became a boy), have all the hallmarks of finely crafted German children’s toys. The artist is able to create an object that is not only immediately familiar to us as the puppet but is also abstract as a body ornament. A beautiful and refined work that hits multiple senses: touch, smell (each timber has a distinctive smell that is only perceived once the nose is on) and sight. 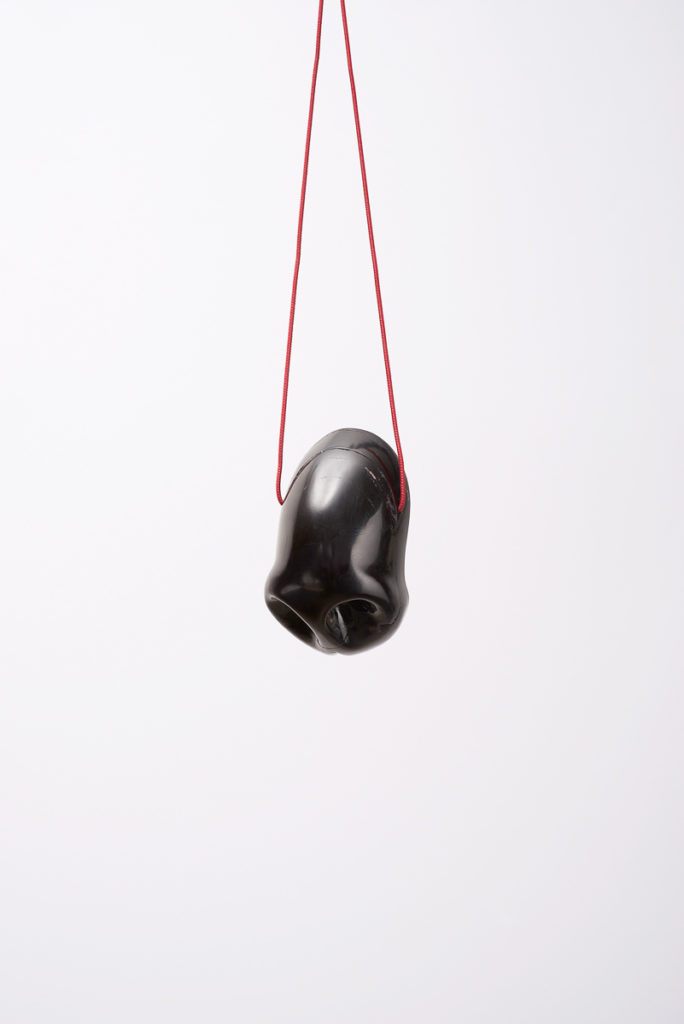 The noses are an invitation to be “naughty” and silly and to poke fun at ourselves and others but at the same time to think about the works in the light of serious contemporary issues. Bielander has used beautiful Australian timbers that are also used in the craft found in tourist shops, inviting the question: “should we not conserve our natural resources for greater purposes?” [my words]. Describing variously coloured woods, which range from the dark honey of the Marri Gum to the rich mahogany hues of Jarrah, he points to the racial discrimination that has become a major issue with mass migration around the globe. In shaping one of the noses to look like a narwhal tusk he is able to make reference to the details of a terrorist attack in London. While, closer to home, the charred nose he crafted during the bushfires this summer and also poignantly carved from jet (Koala), a form of fossilised coal often employed by Victorian-era jewellers to make mourning jewellery, are a lament for the loss of our wildlife here and around the world.

Goldsmithing and architecture offer choices to the practitioner. For example, artists and architects can devote themselves to the creation of exclusive and expensive objects for the few that can afford them.  The production of jewellery and architecture can be “business-as-usual”, industries manufacturing a product consumed by the public on-masse, as represented in most lifestyle magazines, or they can counter the norm, they can be particular about something specific, responsive to physical context (the body or the site), to history (typology) and to symbolism (social, political and religious).

My interest in Bielander’s work is the many parallels his art has with architecture. As an artist, he is able to contextualise his work and place it so that it resonates with society in the same manner that many architects are also able to do. Goldsmithing and architecture rely on craft; they both depend on the experiential to be fully understood (as does most art) and both are capable of communicating, through their particular language, stories about our traditions, our gender, political views, sense of humour and what connects us to each other.

After finishing his goldsmith’s apprenticeship and working for Georg Spreng, of Frogdesign fame, Bielander began studies in the Akademie der Bildenden Künste in Munich. There he vowed to find ways of preventing people from wearing his work as a personal mission to overturn goldsmithing conventions: that jewellery has to be made of expensive materials.  His first major work Smoke Ring is an object which is impossible to wear, so ephemeral that it has no value, while paradoxically so precious for those “in the know”, as all jewellery must be, because of the way it’s made and “captured”. 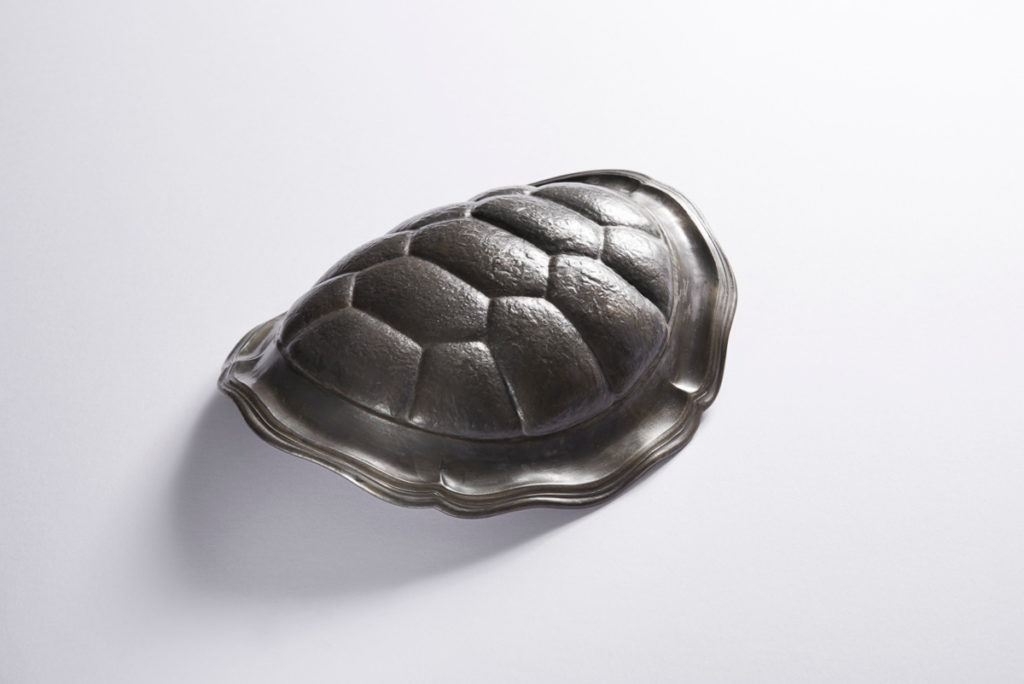 Smoke Ring was not in display at Gallery Funaki in February, however, another work, Tortoise, which Bielander created from an 1840’s “rose petal” tin plate revisits the question of what makes something precious. This type of plate was an object often found in working-class homes where people couldn’t afford the more expensive sterling silver version. It was a mass-produced object so ubiquitous as to be completely commonplace. For Identity Makers Bielander revives the tin plate’s fortunes by fashioning it into the shape of an animal, pointedly a dead one—only the shell is present—and therefore an animal on whose survival society should place a lot of value.

Our eyes are caught by the repoussé re-working of the plate into a tortoiseshell and it’s only on second reading that we recognise the rose petal plate that was used as “raw material” for the work. Context, the home, history, the found object, and craft, the hand of the artist refashioning the object into a tortoiseshell, is what gives this object its cultural relevance today. Bielander, in other words, demonstrates to us how he has chosen to redefine the problems of his discipline.

In jewellery as well as architecture there are always questions of history, craft and manufacturing methods but more specifically jewellery deals with the body and wearability while architecture with space and experience. The Klein Bottle house by MCR, like the Smoke Ring is an “impossible” object, one that seemingly cannot be inhabited.  But the parallels between the two disciplines don’t stop there and my interest in Bielander’s work stems from the way he plays between the rare and the commonplace, the valuable object and the piece of junk, the trinket and the work of art to provoke and question our values. The way he explores culture has many parallels with the methodology of architects from the Melbourne School: Edmond and Corrigan, ARM, MCR for example and also informing the ways we approach design in our own work at MGS. 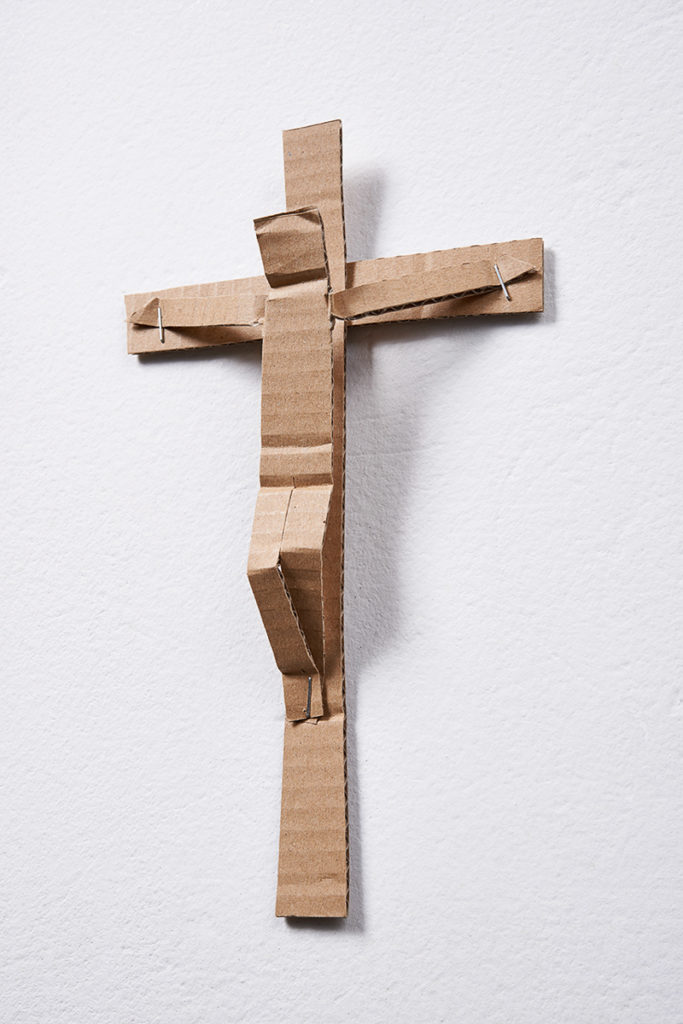 I can’t end this review without mentioning Bielander’s Crucifix (2019) which comes in two editions, paper and silver, both identical in shape and look but obviously not to the touch. The paper version is DYI and comes in a kit similar to that we played with as children when we removed the shape of a doll and its various outfits from a cardboard cut-out and then placed the clothes on the doll by bending the tabs and positioning them on the doll-mannequin. In his version, Bielander makes us remove from the cardboard the cut-out shape of the Christ and then supplies us with the staples to “nail” him (all over again) to the cross. It’s a powerful statement and one that invites us to reflect on our religious beliefs as well as our human values.

Artists may have been seen as public intellectuals only since modern times. Before that, they were basically seen as tradesmen. But in a world where much discourse has retreated into the specifics of particular disciplines and intellectuals communicate only with each other rather than with the world at large, artists are pointing us to the interesting questions of our times. Their world-view, shaped as it has always been from something deeply personal, today seems to offer us greater value than the political and intellectual discourse because of the way that the particular can simultaneously become universal.

Identity Makers is a show that turns the commonplace into the particular, the prosaic into poetry and the comical into deadly serious play.

Identity Makers an exhibition by David Bielander was at Gallery Funaki Melbourne, 4 – 29 February 2020.