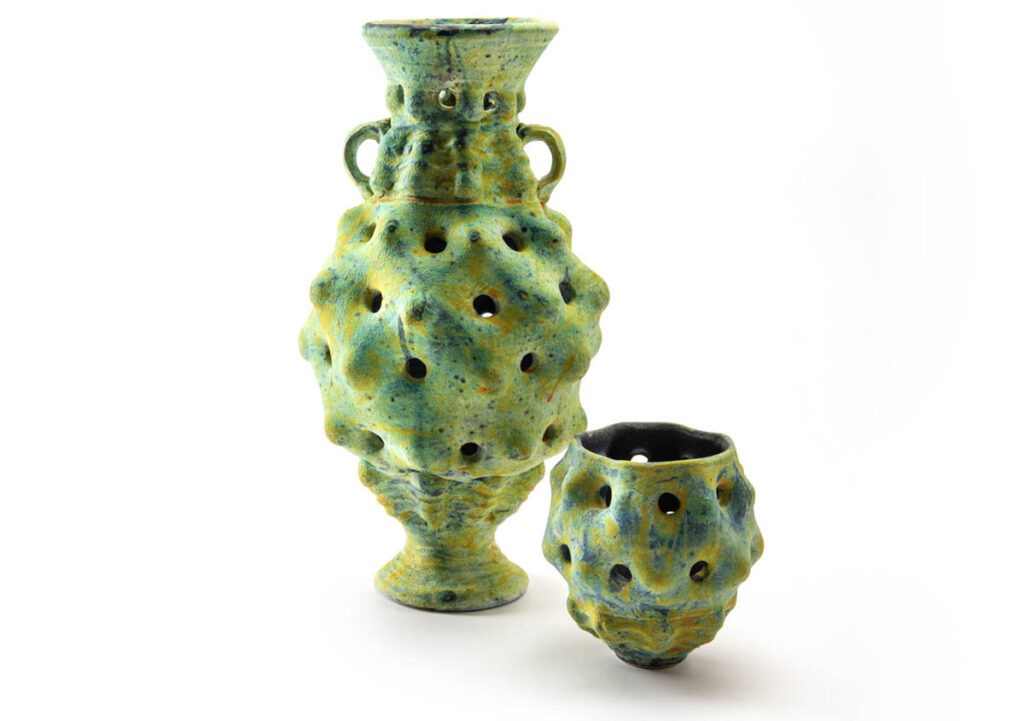 Simone Fraser explains why she was drawn to ceramics as a way of feminising the rites of her childhood.

Some years ago I was confronted by the trauma of a bright young female friend trying desperately to exit a fundamentalist religious sect.  A trauma in that it forced me to reflect on my own spiritual upbringing. Me, the product of a strict Catholic household, a nun-based education that emphasised faith over learning and the unquestioned authority of the male hierarchy.

Like millions of others, I joined the stampede away from that Church.

As I embarked on a long journey through motherhood and career the experiences of childhood and youth remained deep in the subconscious. Art school, you might assume, is a good place to purge such thoughts. Certainly, it provided an alternative culture. Along with the skills of process, it taught us the skills of critical thinking. But I remained conscious of the role of ritual. I recalled the various instruments used to facilitate that ritual—chalices, monstrances, ciborium, patens—mysterious objects with mysterious names to a child-  but objects that were venerated, that had to be treated with respect. Glowing jewel-like on a lace altar cloth they were, we were instructed, consecrated.

This brief background provides some context for my work as an artist. Within the parallel universe of the art school, I gravitated to the three-dimensional world of ceramics, at a time when the revolution in clay was arriving in Australia. The Canberra School of Art was blessed with some exceptional teachers who had spent a lifetime absorbing the history of ceramics and who had the talent and will to share their knowledge and passion. And so, I began a love affair with clay in all its infuriating variability. Using my hands to unwind a timeline that stretched back thousands of years over all cultures, not just in form but also surface.

The vessel contains in its commonality a language that everyone is familiar with, the cup, the jug but it is also, moreover, one with four dimensions – infinite planes of depth length and width – and time.  It is an encapsulated history that marks civilisation, extending forward to us today, with surfaces on which I could capture something of the grittiness of my immediate geography, the eroded hills, rough textures, and unique colour palette. All of which directed me to experiment with dry glaze, a process that captures something of the feel of this old-young country. 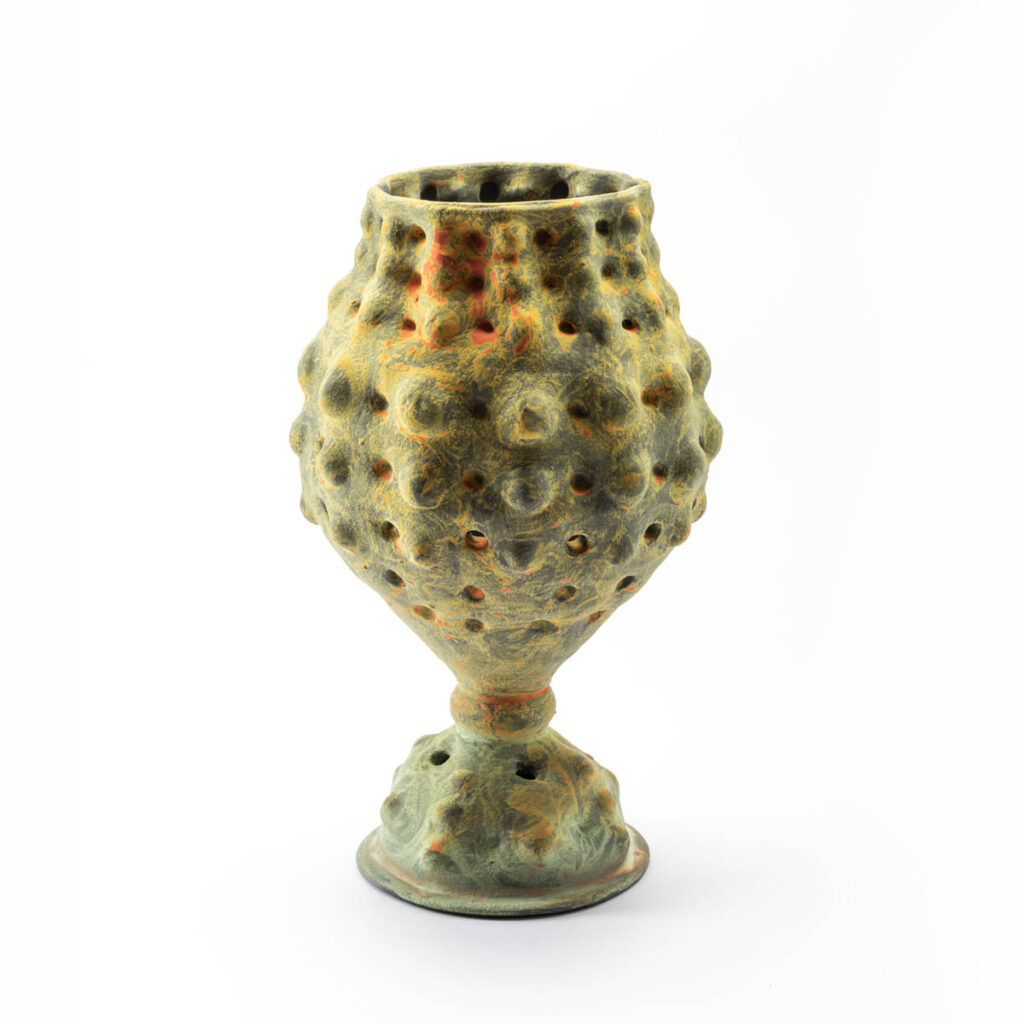 Art school was an encouraging place for a feminist.  Ceramics was still something of a boys club although the gender divide was quickly evaporating,  unlike the Church, which preferred to dig the trench deeper, oblivious to the change taking place in other institutions.  So while I remained mindful of the performative ceremonies of that Church, I could not reconcile the fact that no female could be part of this strict ritual. It was at this time that my friend’s battle with religious fundamentalism ignited a fierce resentment in me something that needed to be addressed. It led to a rethink of the role of ritual objects in reinforcing a certain type of religiosity and lifestyle.

This ferment of ideas bought forward a body of work that culminated in an exhibition at Sabbia Gallery in 2018. The title of that show was Icono-plastic, a play on words, of course, icons being the ritual vessels referenced and the plastic a nod to “The Plastic arts”. It forced me to think about the basis of my own spirituality and whether it could be realised in a three-dimensional work.  What is the nature of the sacred? Why is the vessel so very often the form the icon takes? Does an imperfection destroy the sacred? Or enhance it?  Is consecration a spiritual or manmade property? Surely the imperfect is a true reflection of we imperfect humans!  Or has the vessel itself become a symbol of suppression in this case?

Ritual vessels are used in many ceremonies of many religions, including Christian, Muslim and Judaic.  All are mostly male-dominated, the female being relegated to minor roles.  My vessels symbolise an alternative message to the distorted, authoritarian, masculine ritual vessels of the formal church. They suggest a different dialogue one that embraces the feminine and natural flows. Icons freed from constraints of patriarchy – balanced.

What this wrestle with ideas does achieve is a progression. In this case, the body of work allowed me to manage a particular concern and move on. My later work still references rituals, but in a more general way—not just the sacred but in the day-to-day joy of community. That is what I have continued to carry through to my latest exhibition: an ongoing dialogue about an open form of religiosity that enhances the everyday actions of sharing.

The spirit of Japanese mingei in Brazil
Embellish - call for works
The shape of YOI よい: A drunken evening of Japanese ceramics
The Gift of Time: Call for works
Korean Craft Trend Fair - 7-10 December
Judy Lorraine ✿ Drawnoutness and the music of clay
Love me and my batik
Sandra Bowkett ✿ Twig vessels