Visionaries: A collection of Canberra talent 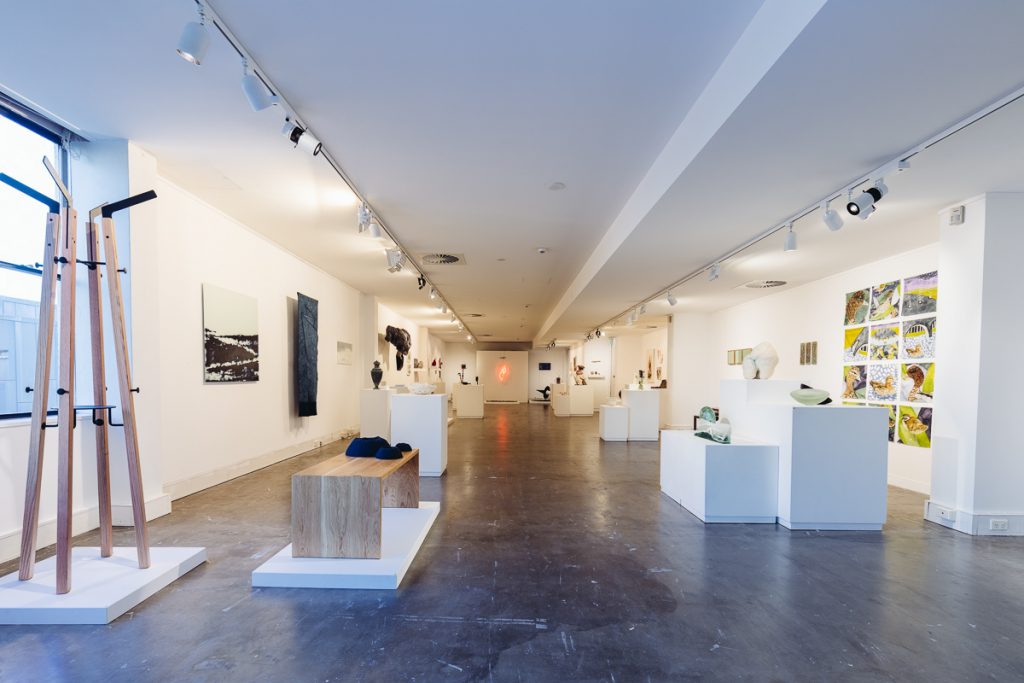 Despite its small population, Canberra has an extraordinary concentration of craft talent. This exhibition at Craft ACT features a sample of the capital’s best makers.

When Thomas More wrote of Utopia in 1516, he was describing a fictionalised place that was free of hunger, conflict and unhappiness. In penning this term he invented a concept that would puzzle and inspire future artists, writers, philosophers and theorists for hundreds of years. Derived from the Greek words ou-topos and eu-topos, meaning ‘no place’ and ‘good place’, the word was, linguistically, a pun that questioned whether a perfect world could ever actually exist. Over five-hundred years later, this concept has been and remains the motivating vision of dreamers and revolutionaries to create a better future.

This year’s Craft ACT Members exhibition, Visionaries, and the Design Canberra festival themed around Utopia, take their cues from this contradictory notion. Utopian ideals have long been a touchstone of Design methodology. Whether on a micro or macro level, innovative designers and makers throughout history have sought to imagine and reimagine better ways of living. These concepts have particular resonance within our local urban environment. Canberra itself was conceived on utopian ideals in 1913, with Walter Burley Griffin and Marion Mahony Griffin’s original plans seeking to lay the foundations for the most liveable and perfect of cities. Yet, as we know today, the Griffin’s ideal vision of Canberra was never fully realized, partially derailed by bureaucratic intervention, two World Wars and the Depression.

Over a century later, the optimism of Utopia continues to be out of reach. To many, the vision of a utopian paradise is an unattainable fantasy. We find ourselves in a period of crisis – news and social media are dominated by stories of famine, poverty, natural disaster and global environmental catastrophe. Of prejudice, intolerance, political turmoil, power imbalance, inequality and conflict between those who focus on our differences rather than our similarities.

Yet, as we continue to drift apart, it is galvanising to witness the ways in which we yearn and are still able to come together, make connections and form communities. The resurgence of contemporary craft in recent years reflects this, with increasing demand for the handmade – from the objects we use and adorn our homes with, to the clothes we wear and even the food we eat – a symptom of our desire for closeness and simplicity in the digital age.

Craft ACT: Craft + Design Centre is one of Australia’s longest-running visual arts membership organisations, and has been supporting and sustained by a vibrant membership base since its inception. The annual membership exhibition has played an important role in this, highlighting the continuous evolution of contemporary craft practice as well as the ongoing technical and material experimentation of the diverse range of artists that make up the membership body. This year’s exhibition Visionaries, includes almost 80 artists who are accomplished representatives of a diverse range of media, from glass, textile and ceramic artists to those who innovate through their work in paper, metal, and wood. Those who craft furniture, collect and assemble found objects, collage, weave, embroider, pin-prick, and weld.

Most importantly however, this group of exhibiting artists reflects the strength of the craft community, and the enduring ability of craft to produce an inclusive space for connection, exchange, and collaboration and act as an anchor point between people across time. They are both teachers and mentors, students and mentees. They represent a cross-section of practices, with long established makers presented alongside emerging artists whose creative voices are only just developing.

Although Utopia itself will forever represent an aspirational rather than tangible vision of the future, Visionaries is a fitting title for an exhibition that celebrates connection and the richness, openness and diversity that is alive and well in contemporary Australian craft. 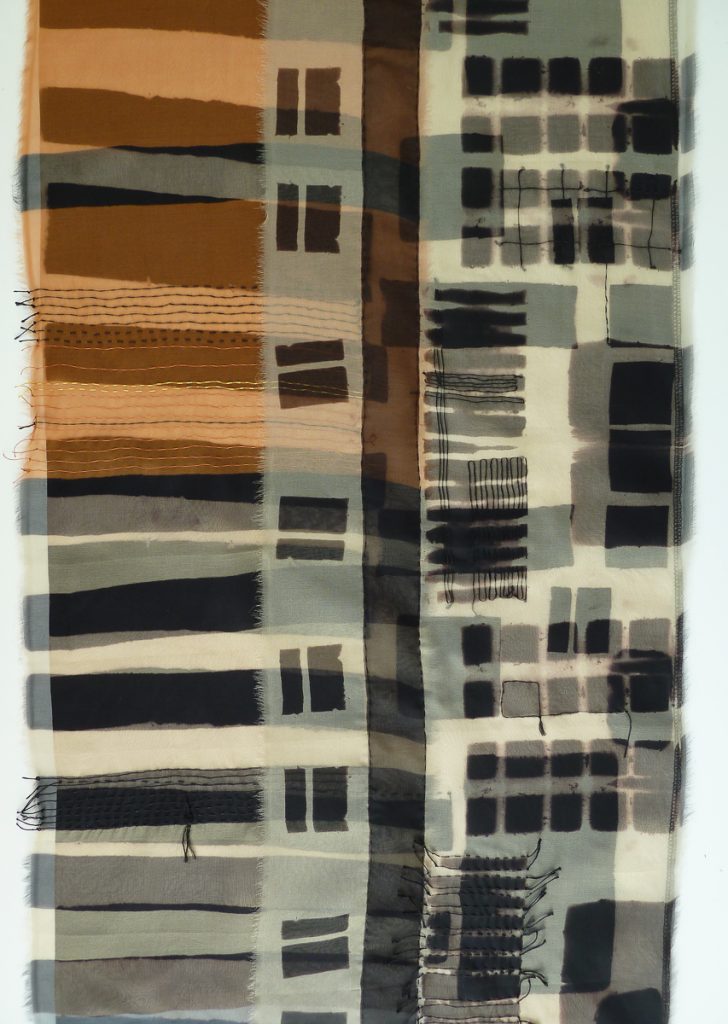 Rogers has re-imagined urban living, the gritty nature of city life while exploring both pattern and texture. This piece is based on a high-rise, or is it an aerial view? In our urban centres, constant construction is juxtaposed against that of deconstruction.

Traditional resist dye techniques are reworked into unique textile artworks. While initially appearing quite precise, the unpredictable nature of the shibori processes employed means that final patterns are always subtly varied and rhythms constantly disrupted in a process of adding and subtracting, masking and revealing.

Rogers has exhibited both nationally and internationally over the past 20 years and has work in a number of collections. 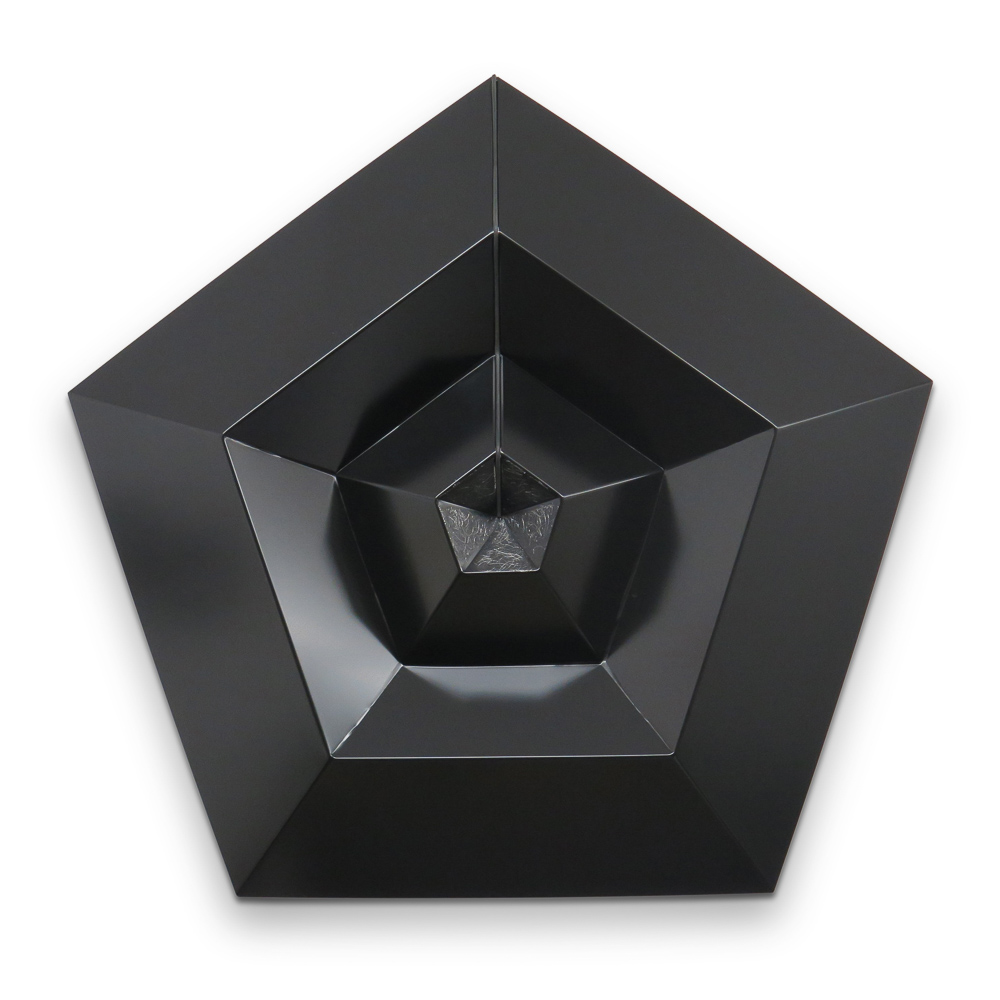 This wall piece belongs to a set of new sculptural works. Its design draws loosely on symbols and architecture; connecting arcs and straights through a folded 90 degree cross-section. These common elements invite a playful exploration of possible combinations. Here the joy is in exploring the interaction of the object’s elements together with its colours and textures.

This work is a further development of my approach to combine a manual craft practice with digital fabrication processes. Initial ideas are sketched and made into small-scale models to see whether a design is likely to work as a larger, 3D object.

A successful design is converted into a digital drawing using a graphics software. This computer drawing is then engraved and cut by a commercial fabricator onto a aluminium composite panel. Finally, the object is manually completed in my studio through folding, assembling and finishing its components. 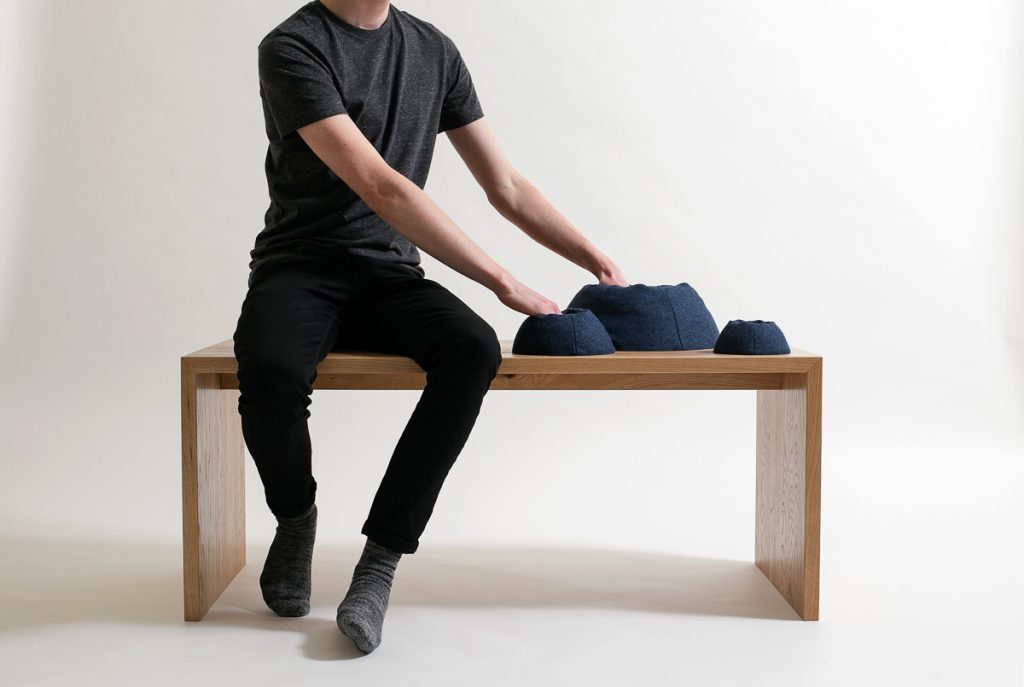 The life cycle of a barnacle; from floating freely in its larval stage, to permanently attaching to an object or base; is echoed in our human need for connection and attachment. The creatures that once found shelter and refuge within these shells, leave them behind as an offering that we too might find comfort within.

Where the shells detract from the practical functionality of the bench, leaving room for only one person to sit, they instead make room for emotional connection and self-reflection. The shell-like forms hold an inherent sense of tranquility and naïve wonder, and comfort the user through form, colour and tactility. The soft interiors hug the hands of the user, provoking a sense of childhood playfulness through exploration and interaction with the piece.

Not intended as a permanent escape from reality, this work instead offers the user a temporary moment of separation from the world around them in which to become lost in ones own thoughts, thus finding repose in solitude. 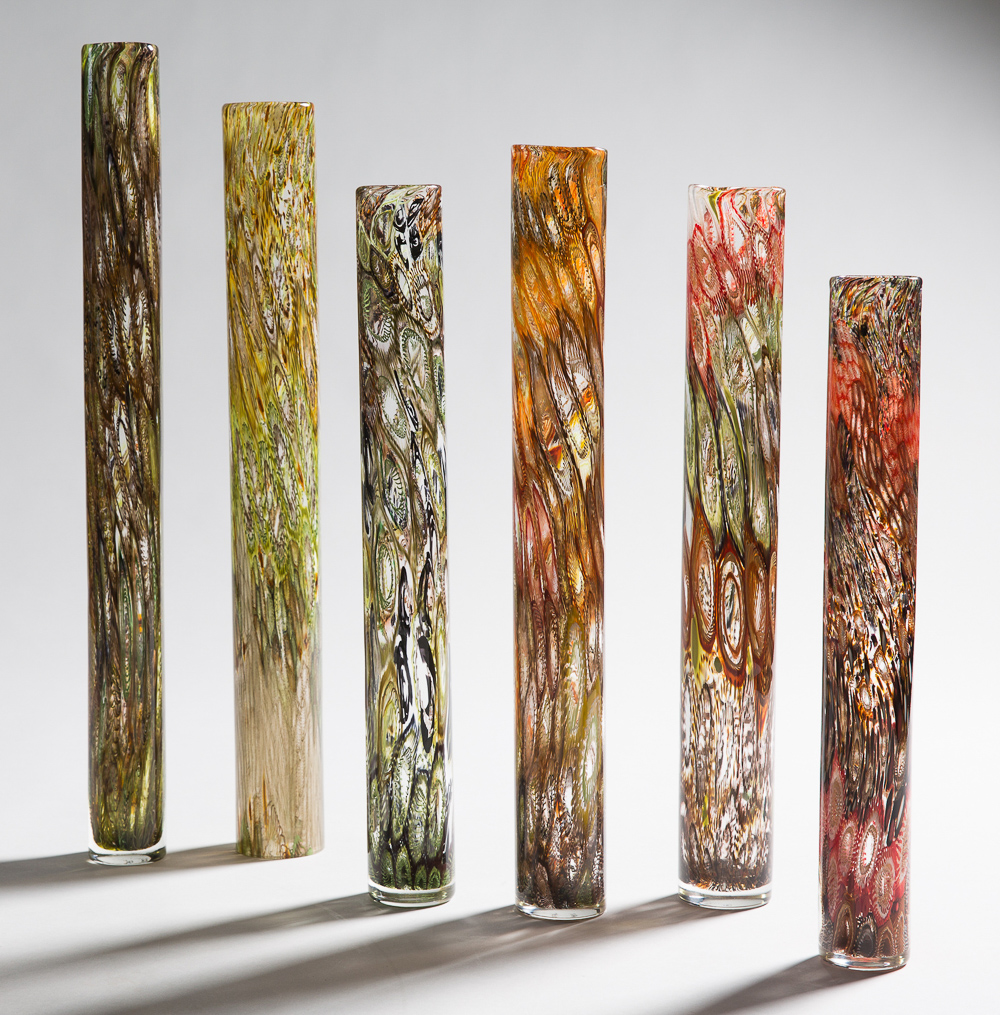 Scientists seeking to understand the layers place and its human history sink deep extraction shafts through layers of earth to bring up sample cores for analysis. What if, instead of compacted layers of earth, those sample cores brought up the shapes and sounds of the voices of that place’s first peoples, their stories, songs and ceremonies.

Each of the Voice Cores in this series seeks to extract the shapes and resonances of the First Voices for each of the places named, it’s vowels, consonants, syllables – each captured in the colours and forms of the natural environment of each place.

The Voice Cores represent an extension of both conceptual and technical elements in my work. In my series of hot blown glass Bush Flowers bicornuals and dillibags I created murrine from complex hot sculpted glass canes to emulate native flora. In the Voice Cores I have experimented further with this process, seeking to invoke not just purely physical forms, but to step beyond the physical to invoke the metaphysical, that which is ephemeral, the shapes and forms of the first languages that existed in those places in the distant past. At the same time I am attempting to fold the past and present in the timeline of each place together through the use of the native colours and forms of those places as they are today – ‘Always was, Always will be…’ 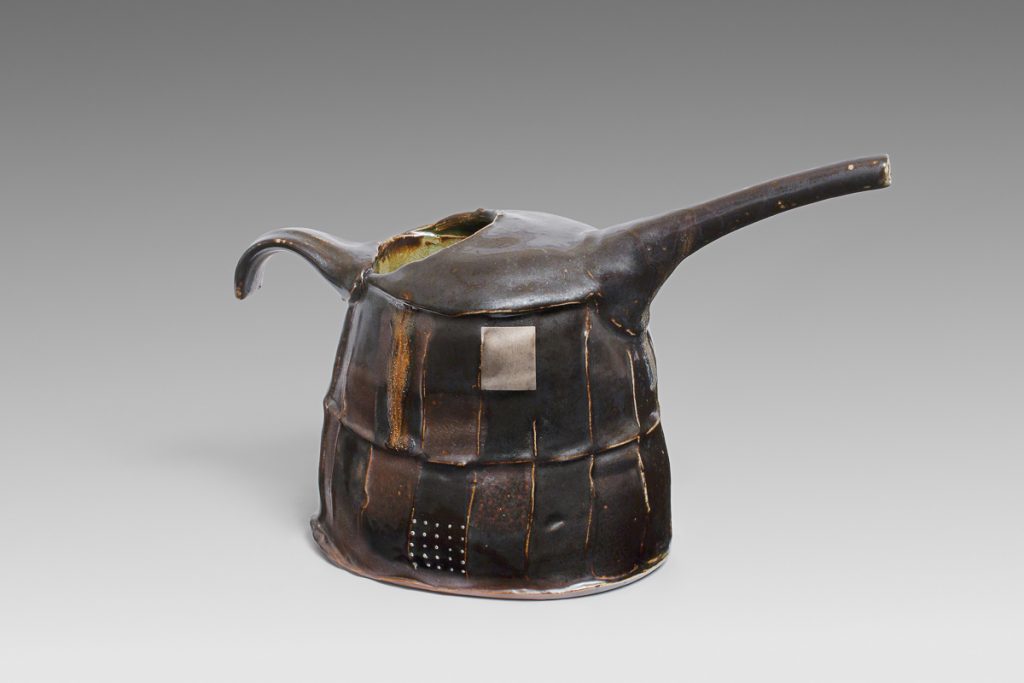 My practice is informed by the long and variant history of ceramics for use. The processes and results of wood firing excite me and I draw inspiration from wood fired ceramic traditions in cultures such as Japan, Korea and China.

This body of work work is work hand built using slabs. I love to play with functional elements like rims, spouts, handles and feet. The surfaces are textured to provide more variation for the interplay of wood and salt, glaze, clay and slip. The work is then subtly embellished with enamels and metallic lustres.

It is important to me that through the construction the imprint of my hand is evident in the finished work.These marks become a point of connection between my hand as the maker and the hand of the imagined user.