Promising messages in bottles from Canberra

The 2020 harvest of early-career craft artists in Canberra shows enormous promise. Here are some examples: 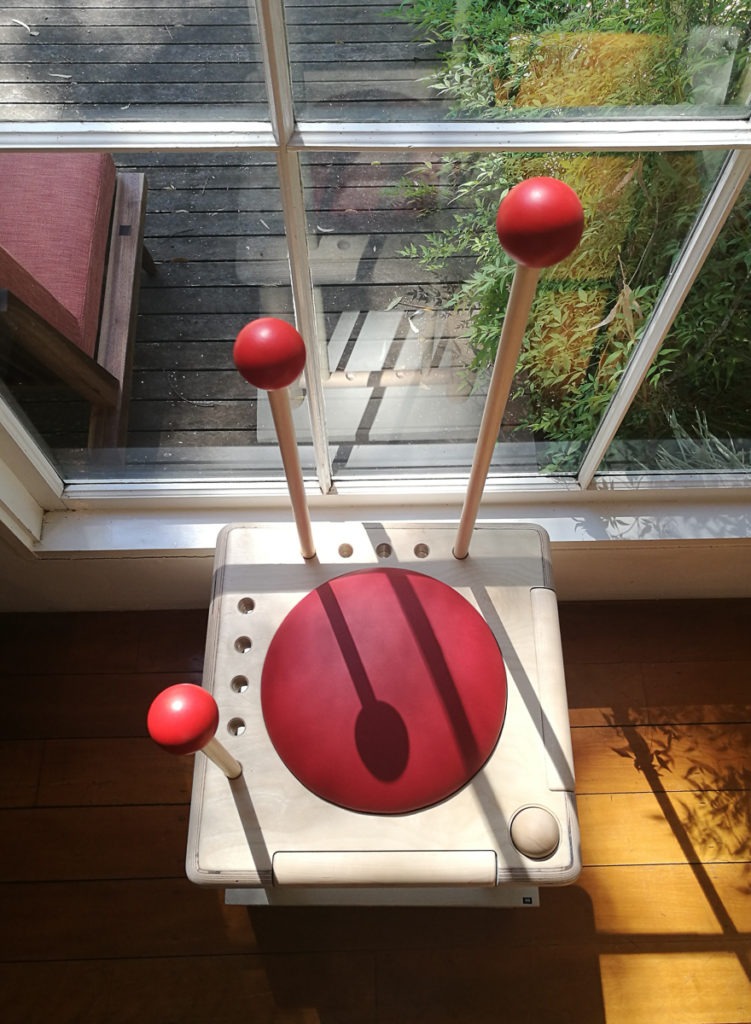 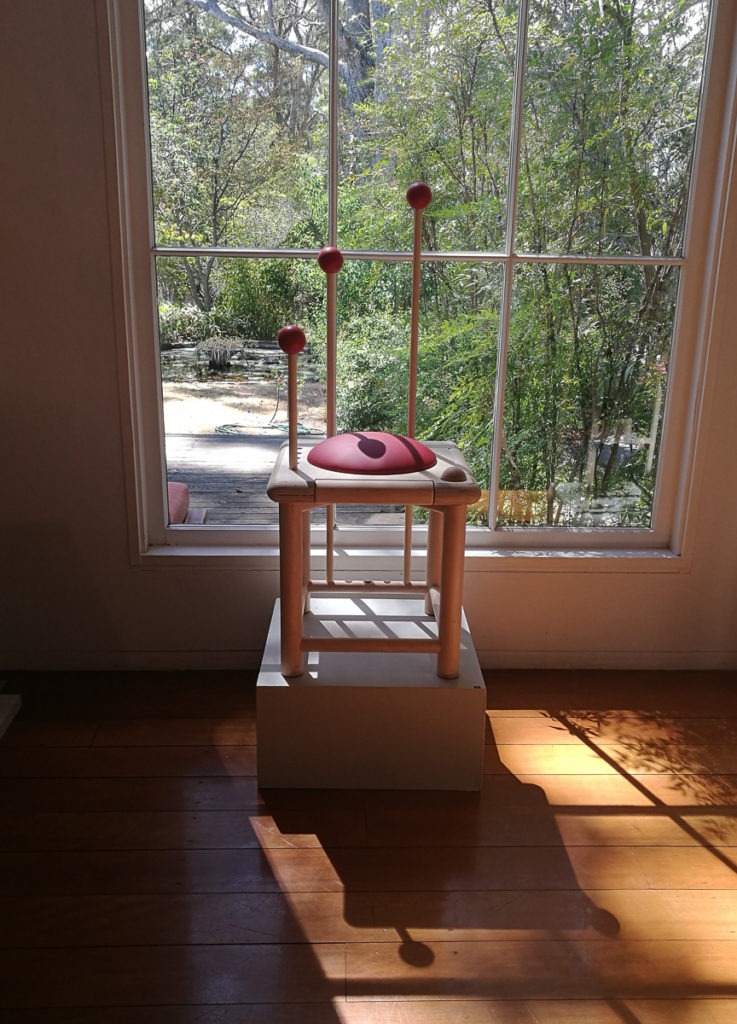 Kazu Quill is a designer and maker based in Sydney. He received a Bachelor of Fine Arts at the University of New South Wales in 2016 and is a graduate of 2019 from the Sturt School for Wood. Conceptually his work is driven by play and experimentation, reinterpreting function and tradition through furniture object making. An active exploration of cultural identity is also driven by an influence of Japanese aesthetics and traditional craft processes. Kazu aims to develop a multidisciplinary collaborative practice at the intersection of art, design and architecture; experimenting and working with different materials and processes. 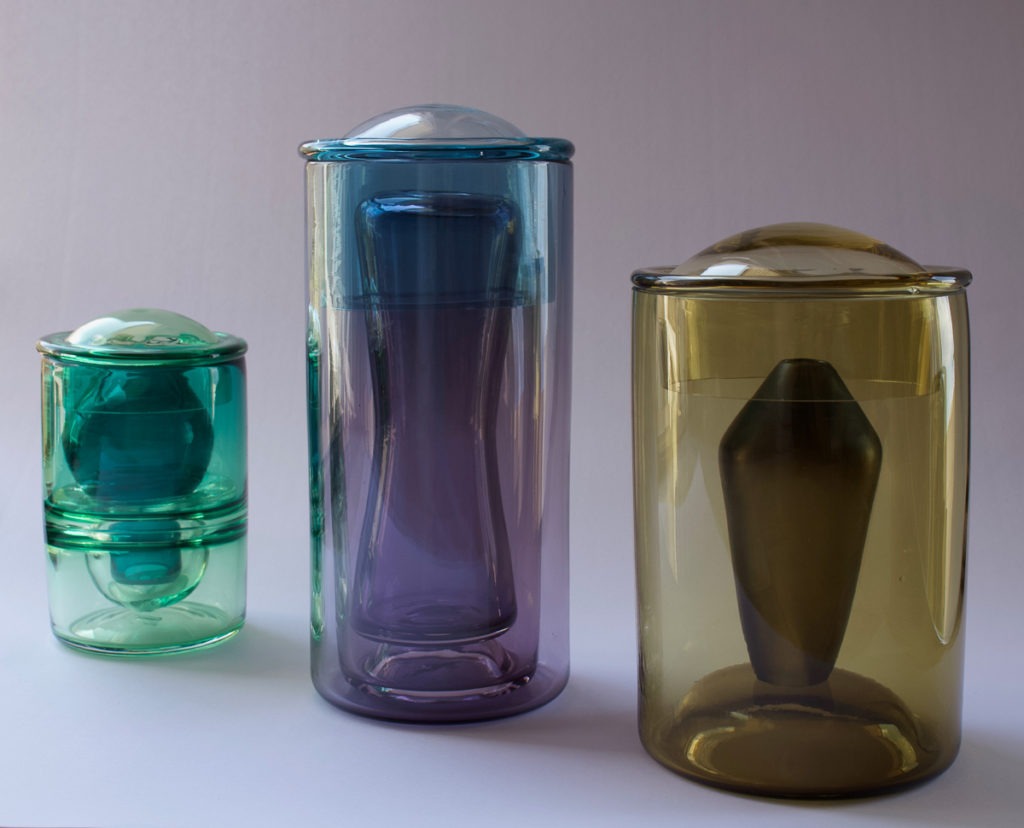 Bethany explores mystery, knowledge and discovery through the medium of blown glass. Her interlocking forms confound immediate understanding and invite investigation. The puzzles display or suspend objects but their mechanisms are elusive so the viewer is challenged to interact – surely solving this is simple! Formal shapes create controlled environments, and captured spaces invite observation; texture, color and engraving build a story we expect to understand. Each piece starts as a glowing ball of molten glass, which is shaped by tools, breath and the heat of furnaces. The magic of hot glass dissipates as the material hardens and cools, but as people manipulate the puzzles, they emulate the tactile interaction and responsive investigation of everyone learning the mysteries of the physical world. Finding a solution gives joy, release, and satisfaction. Cold glass is brittle – ironically, when people shake, spin and tug the pieces, Bethany feels both gratified and terrified. 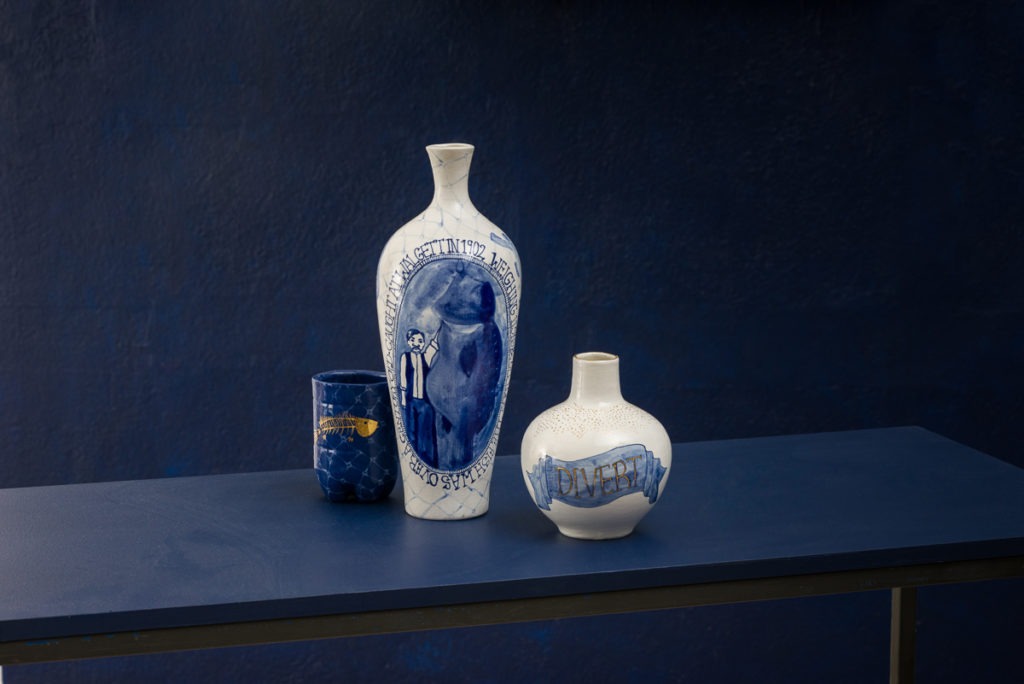 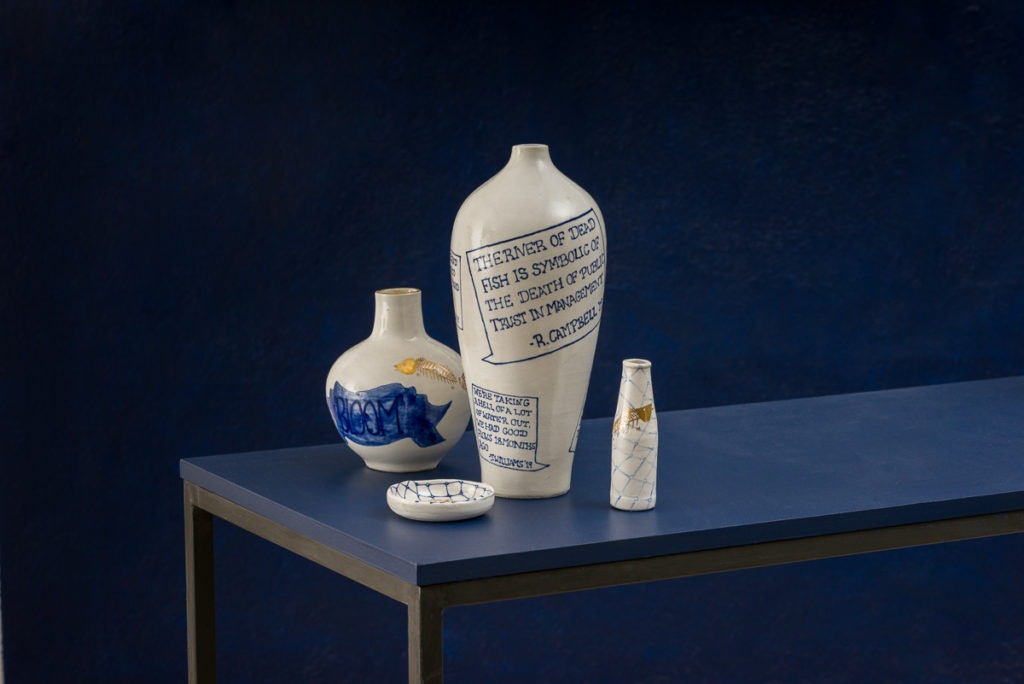 Arrogance, power & death form the core of Farrelly-Barnett’s work. A parable for humanity’s complex interrelationship with nature, the work interrogates the misunderstandings that disturb our present & threaten our future. The unprecedented 2018-2019 Murray-Darling fish kills, attributed initially to drought, provided the impetus for Farrelly-Barnett’s work. Caused by a matrix of factors, with poor management compounding the effects of climate change on drought-stricken land, their impact was further intensified by the endangered position of this totemic and once-plentiful fish. Blue-and-white pottery, with its own lengthy history of appropriation, dislocation and imposition, offered the ideal lens through which to examine the externalities that have bought the Murray Cod to the brink. Slip-cast & hand-painted with individually designed motifs, the installation evokes homage to the wealth-display of traditional 18th-century Porcelain Rooms but serves also to portend the still-reverberant impact of Australia’s colonial imposition on its future. 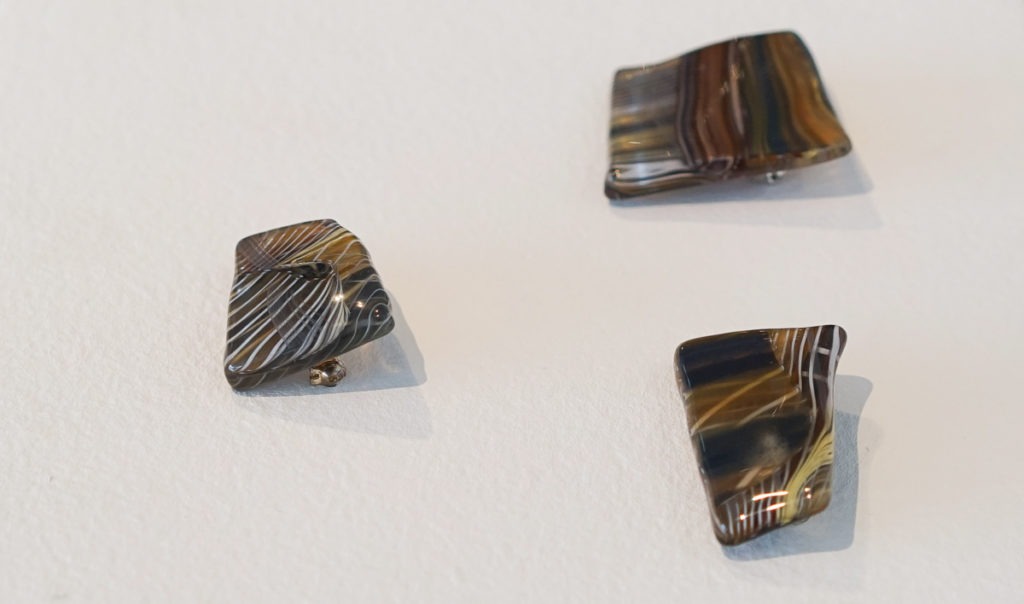 An artist, poet, writer and photographer of Southern Arrernte, Chinese and Anglo-Celtic descent, Adelaide-born, Canberra-based Martiniello is well-known particularly as a glass artist. She draws much cultural heritage from her grandmother, who was from Charlotte Waters, and her father, who was from Oodnadatta, South Australia. Her totem is the Mulga or King Brown Snake. She had a background in sculpture, printmaking and photography, before moving into her glass practice, which she says was actually a return to her sculptural practice. In 2006 Martiniello established Kemarre Arts, an ‘urban based’ Aboriginal art centre, to assist Aboriginal artists in the ACT with creative arts development services, skills development, mentoring and marketing assistance. 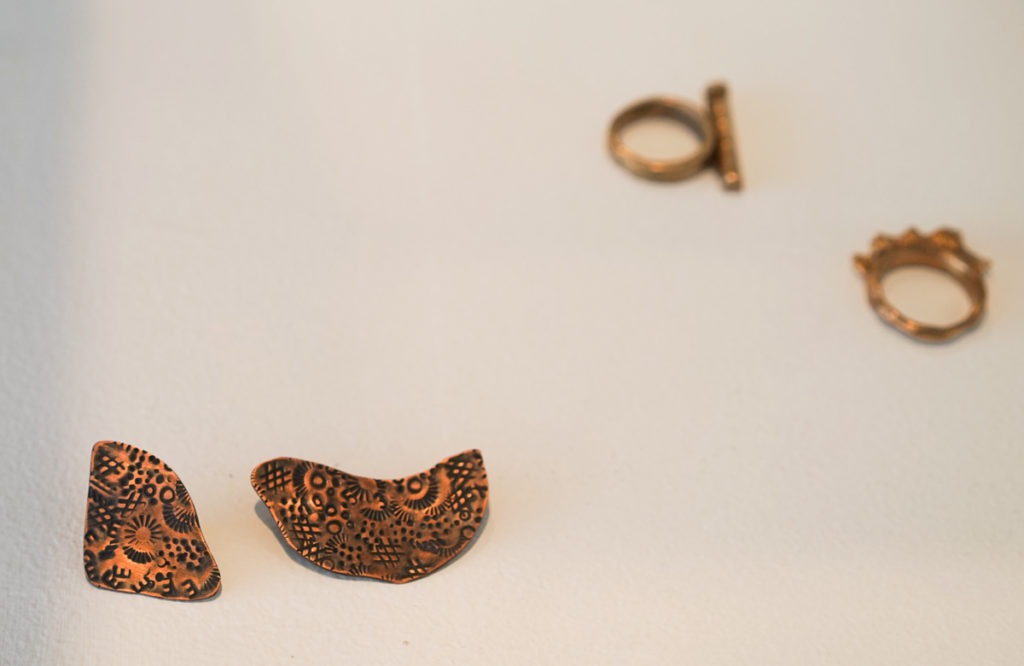 I was born in Nowra NSW and have Jerrinja and Wodi Wodi Tharawal ancestry but was raised in Ngiyampaa Wangaaypuwan Country at Cobar NSW. I recall the hardships of growing up as an Aboriginal child on the outskirts of a small mining town and often think about my mother’s tutelage. At her hands, I learnt respect, to treat others as I would have them trest me, and to work for what I want, as anything is possible. I have lived in beautiful Ngunnawal Country since 2000 and it is here that I began developing and nurturing my own arts practice. I have been mentored by award winning Indigenous artists and am a member of the Indigenous Textile and Glass Artists Group as well as the Kemarre Arts Women’s Group.

We’re living through a very confronting and difficult moment in our history. Daily we receive news reports about our world which are enough to engender despair. We are repeatedly confronted by convulsions in our environment that are shocking and distressing. What can we do to change things? We can speak out. We can take positive action. We can make things. No artist or craftsperson who sets out to create something in today’s world is succumbing to despair. Despair engenders inaction, produces nothing. Going to your studio to make art is a counter to despair. It is an act of optimism, driven by hope. Hope has been the object of philosophical and artistic explorations and reflections over centuries, and an impetus for activism and change. Hope is alive and well in this exhibition.

The great Lebanese-Australian Anthropologist Ghassan Hage has spoken of an economy of hope, and the political economy of hope is a term that has currency in areas as diverse as biomedical practices, race relations, and sustainable living. Hope offers us a way of engaging with the future in the face of catastrophe and its effects – uncertainty, despair and immobility. Another term currently in use in the discipline of economics, which is derived from environmental renewal, is ‘green shoots’. Economists speak of signs of recovery from recession as green shoots.

In this extraordinary historical moment, as we search for hope on the broad horizon, we look for, and are heartened by, green shoots sprouting in the devastated forests that surround us. Green shoots are what we see in this exhibition Emerging contemporaries: new beginnings, new ideas and new solutions in the work of practitioners who are driven by hope and optimism, working to defeat the despair that threatens to envelop us. In the diverse practices of these 21 artists making glass, ceramics, textiles, jewellery and furniture there exists the promise of change; here are new beginnings and exciting developments that engage with the future whilst acknowledging the past. Emerging contemporaries salutes the possibility of art and craft to defeat despair through growth, renewal and recovery and optimism, through the sheer optimism of making.

Gordon Bull is a Visiting Fellow at the Centre for Art History and Art Theory at ANU, School of Art & Design.

Deborah Clark is an Art Historian and independent curator, writer and editor.

Emerging Contemporaries is the Craft ACT National Award Exhibition for early-career artists. This exhibition plays a pivotal role in supporting and transitioning artists into professional practice and placing Australian artists in view of the national cultural collecting institutions, business and industry, and audience. Graduates are selected from ANU School of Art + Design, University of Canberra, Sturt School for Wood, Canberra Institute of Technology and Canberra Potters Society.