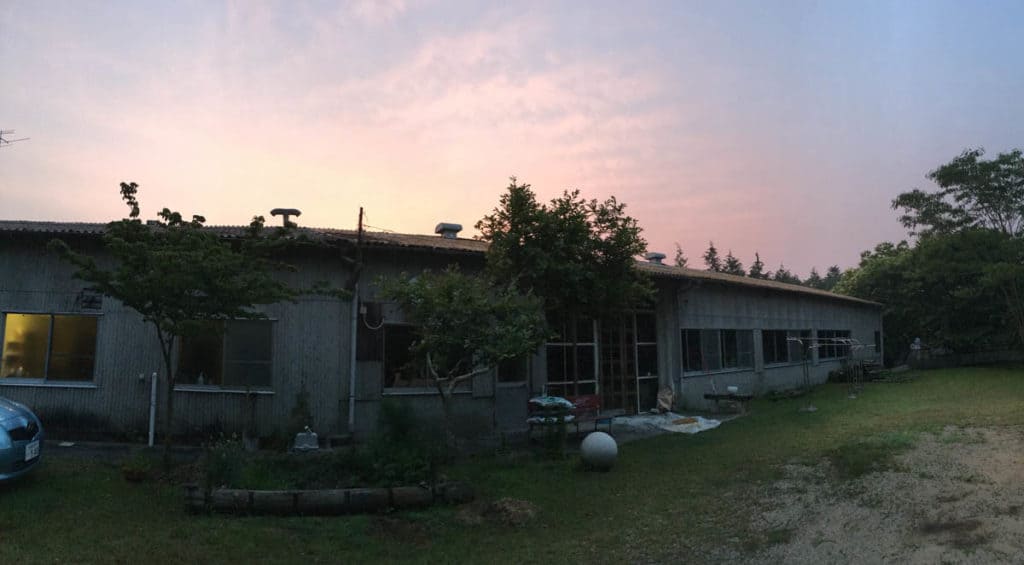 For the last few months, millions have been looking for the “spark” (tokemu) objects might give the beholder. If they fail this test, they are thanked then discarded. Followers of the KonMari method focus on a bright moment of light to just the worth of objects. This favours the flashy and gimmicky object. By contrast, the ceramic artist Yoko Ozawa has offers us more enduring and subtle light, the 余韻 (yo-in) afterglow, in which to view the resonant works she has gathered from Japan. Here we continue our feature on Mr Kitly as it continues its journey from Kyoto to Melbourne.

For a few months in the early summer of last year, I went back to Japan and had the opportunity to visit various ceramic artists’ studios and pottery towns. Some were nostalgic faces that have been missed for several years, and others I visited for the first time; this trip was very meaningful for me.

Last year in Japan, there were scenes of natural disasters that caused me sorrow. Earthquakes, typhoons, floods caused by heavy rain, why has Japan so many disasters? What came to mind during my travels, seeing the scenery of the countryside from train windows, was the word “fudo” – meaning climate. According to the ethicist, Tetsuro Watsuji (1889-1960), the national traits were formed by the climate.

Two questions came to mind. Is there any national character in ceramics? How about my point of view? A person who has been living in the dry climate of Australia over ten years might have a different perspective on ceramics.As is well known, Japanese pottery has a long history.  Japanese pottery remains deeply rooted in and inseparable from this historical culture. Despite these shared roots, I saw in today’s Japanese ceramics the existence of a complex subdivided stream. The complexities of these artists’ works deserve more description than just the ‘contemporary’ label. Within this group of artists, the works of those at the forefront are sprouting like fresh green leaves in the early summer – lively and extensively. After the trip, this gave me reassurance that the future is brightening up.

Japan has rich geographic resources for ceramics. A variety of clays were gifted by the volcanic land. The rain and snow raised the forests. The climate has certainly created the circumstances for ceramics. But when I look at these collected works for余韻 (yo-in), an even stronger sense of Japan arises in me. I know these ceramics are not only made from the earth, water, and fire. They are also made from a fundamental relationship between the artists and those elements. The elements are infused into these works. I found soul in these works – animism, it is the strong connection between ceramics and the Japanese since ancient times.

Yoko Ozawa is a Melbourne-based artist who studied Japanese painting and graphic design in Tokyo. Ozawa began practising in ceramics in 2003 and has been in Melbourne a base of her creation since 2010. Since then, she has been part of numerous exhibitions and events in both Australia and Japan. Ozawa wonders about natural phenomena such as fog, rain, snow, light and shadow, and things that we cannot see, like a breath of air or scent. While working with subtle tones and simplistic forms, she explores the stillness and space between objects, something defined by Yohaku (blank space), a Japanese painting concept which she studied early in her career. See Full of emptiness: The wonder of Hagi ware 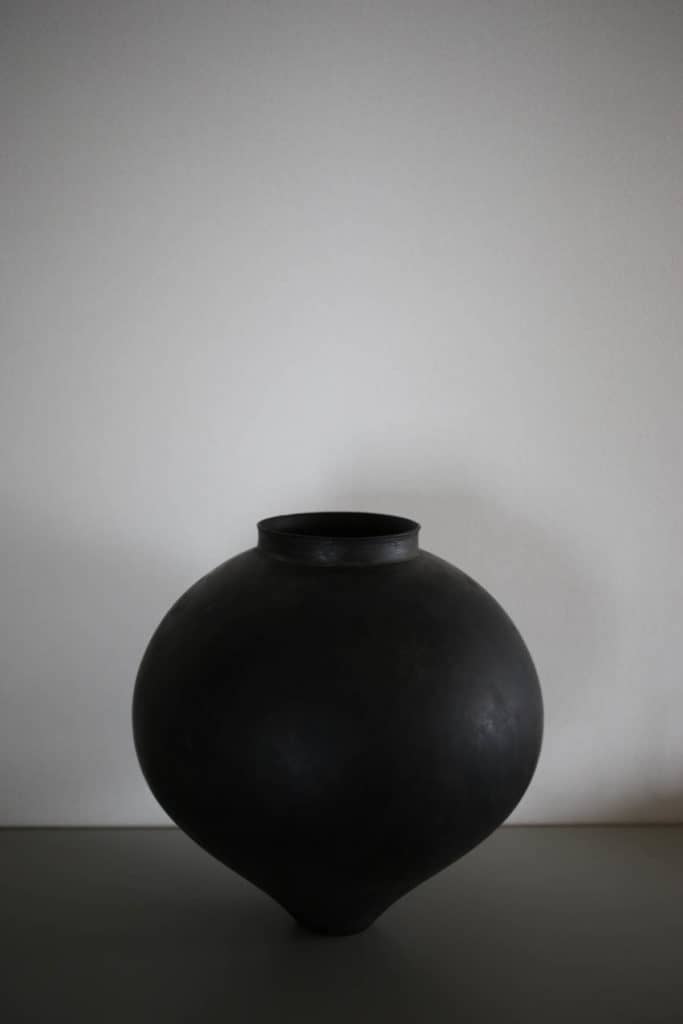 Kenta Anzai makes quietly profound black ceramic vessels. They create a deeply moving atmosphere of their own. The vessels are coloured using urushi lacquer (sap from the Japanese lacquer tree) mixed with glaze then applied on the stoneware body. This process is uncommon, urushi lacquer, whilst a common craft material in Japan, is traditionally used only on wood. Although it does have an ancient precedent on ceramic – urushi was used over 5000 years ago on Jomon pots in Japan.

Anzai places utmost importance on the atmosphere of the object. He notes that overexposed photos tend to show only the dramatic element of objects whilst Anzai’s focus is on the subtle part of the objects that tend to disappear in bright light. In describing his work, Anzai refers to the saying in Japan that potters should not take too much time making a ‘masterpiece’ (to avoid over-doing it), and notes that his own work takes one to two months to complete each piece. He says that this is against common sense in the Japanese pottery world. The appearance of simplicity in Anzai’s work is contrasted by the extended time involved in the making. For Anzai, his objects are not about the design, culture, nor knowledge that words can express. The importance of the object for Anzai is its ‘being’. The object creates the atmosphere in the space between people. As he states – ‘It is my medium of communication between the user and I. ‘ 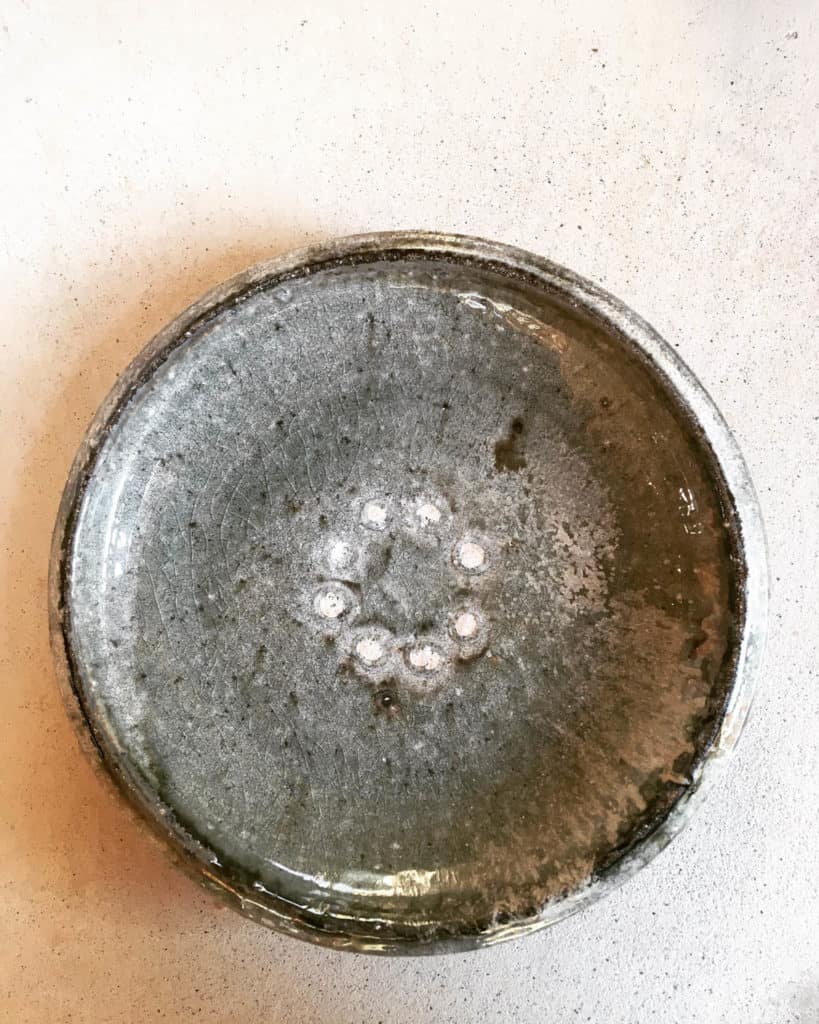 Toru Hatta’s studio is in the relatively urban environment of Sakai city in Osaka prefecture. His work is evocative of the earth of which it is made and ancient traditions of clay and glaze. You can see this is the work of a highly skilled modern artist with a deep respect for history.

When asked to discuss his work, Hatta says he tends to use an intuitive way of speaking about the process as he finds it difficult to explain in pragmatic terms. He refers to his process of initially firing the dug clay in the anagama, then ‘dissolving’ the glaze in the gas kiln. There is great technical expertise in Hatta’s combinations of glaze and clay body. The iron-rich clay from Nara region that Hatta digs himself has been integral to his work.  Where usually the mineral content in clay will burn out and disappear in the firing process, the iron remains present in the clay body of this iron-rich clay no matter how many times it is fired. Hatta also experiments with different clays and varying shapes and forms. He notes that during making he will often unconsciously throw his pots almost too perfectly, too sharply. In contrast, he will sometimes deliberately use the dug clay that is more difficult to throw and work with as he believes the thrown shapes that result are more unpredictable – unexpectedly appealing, and enjoyable to make. 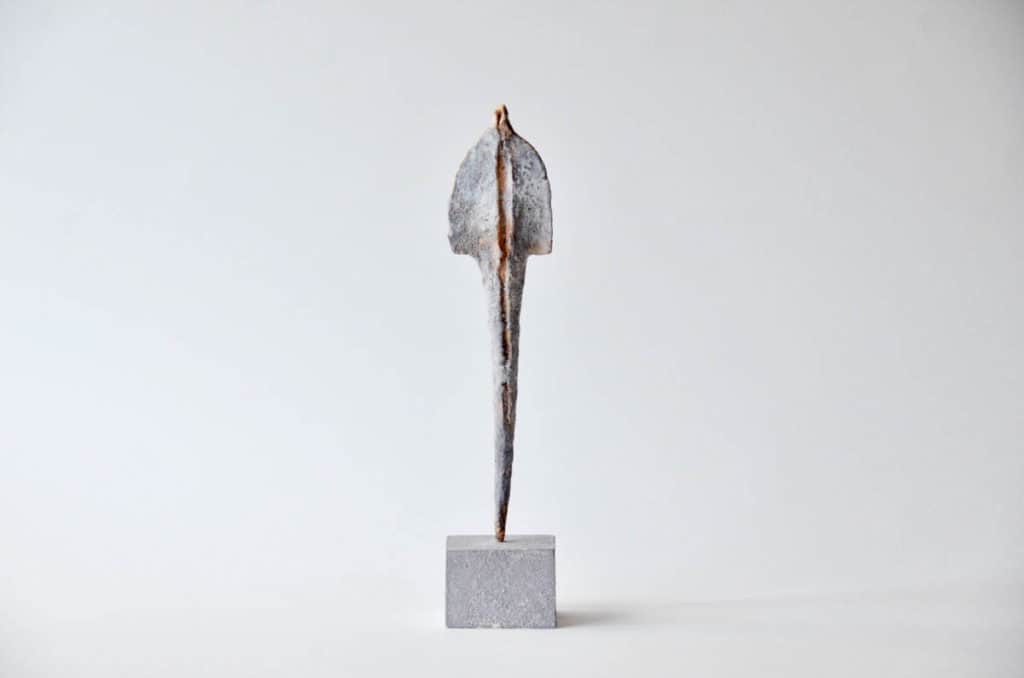 Shiho Hayashi’s handbuilt hitokata (human form) sculptures are delicately animated. These pieces hovering in the netherworld between the abstract and the figurative transmit a small aura, reminiscent of animism. Hayashi is perhaps most well known for her wheel thrown objects – pleasingly rounded and generous forms. For this show, curator Yoko specifically asked Shiho to create these handbuilt objects as she had seen and loved Hayashi’s handbuilt sculptural works in the past and knew they would bring a unique element to the group show.

I try and capture the shapes that are inevitably formed by chance during making, using the raw materials available and relying on my own sensibility. I aim to create diverse handmade work that lightens the spirit. This series of work are abstract expressions of the human form.  It would be nice if they were to be thought of as small protective spirits. 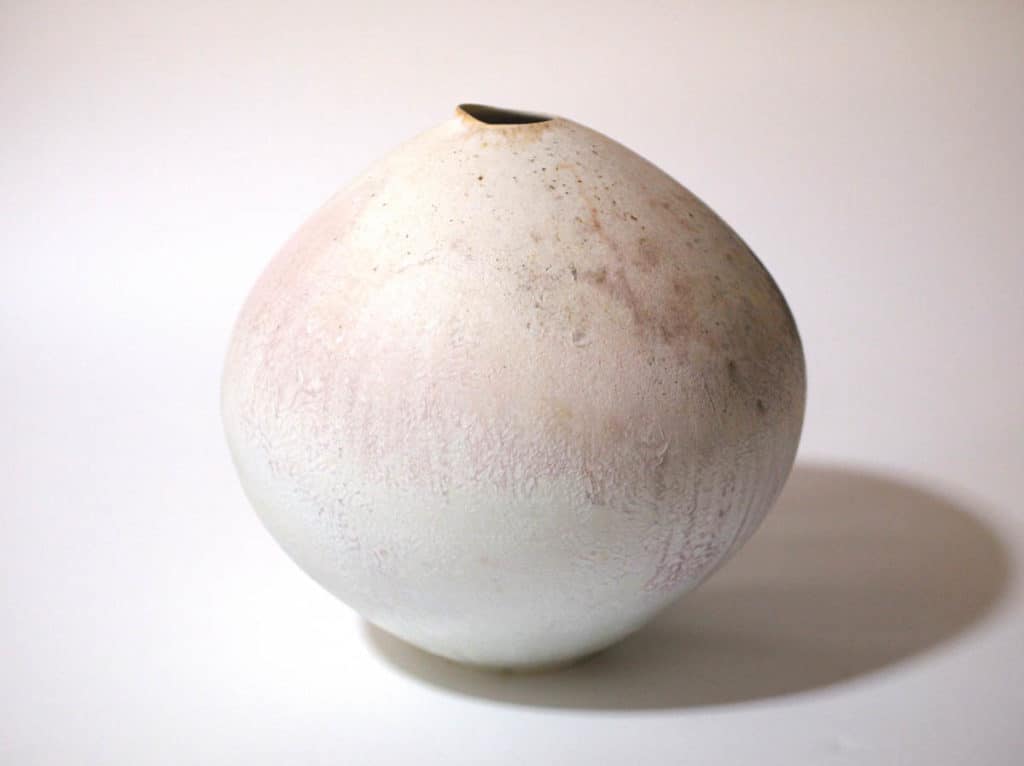 Taro Tabuchi creates wheel-thrown pots in white porcelain with glaze effects created by the flame and ash deposits from woodfiring. Tabuchi’s experimental woodfire approach is the result of a long period of trial and error, and a passionate dedication to the art of woodfire. The distinctive effects he has attained on porcelain are what characterize his work. By carefully regulating the kiln temperature, the type of wood used, and the choice of material, Tabuchi can produce the specific colouration on his work, a type of ‘keshiki’ (scenery) on the surface of the pot.

After graduating University, Tabuchi lectured in ceramics and was making and firing ceramics in a gas kiln. Over time he became interested in the potential of woodfiring and started his own studio deep in the wooded mountains of Kagawa-ken. The forest is beautiful and made up of various trees including the Japanese red pine (aka-matsu). He believed that perhaps he could create beautiful pots being inspired by such beautiful natural surrounds. Whilst working hard collecting his own firewood and chopping wood to feed the anagama kiln, Tabuchi became more and more interested in the accidental glaze effect variations possible in the woodfiring process. This part of the ceramic arts became his passion.

Porcelain has historically been revered for its purity and translucent whiteness. Traditionally porcelain was fired in a saggar (protective pot) to protect it from the effect of flame and ash and to maintain the white purity of surface. Tabuchi takes his porcelain in a unique direction by allowing ash deposits and the heat of the flame to create blackening, cratered effects and the distinctive coloured blushes on the surface of the pots. 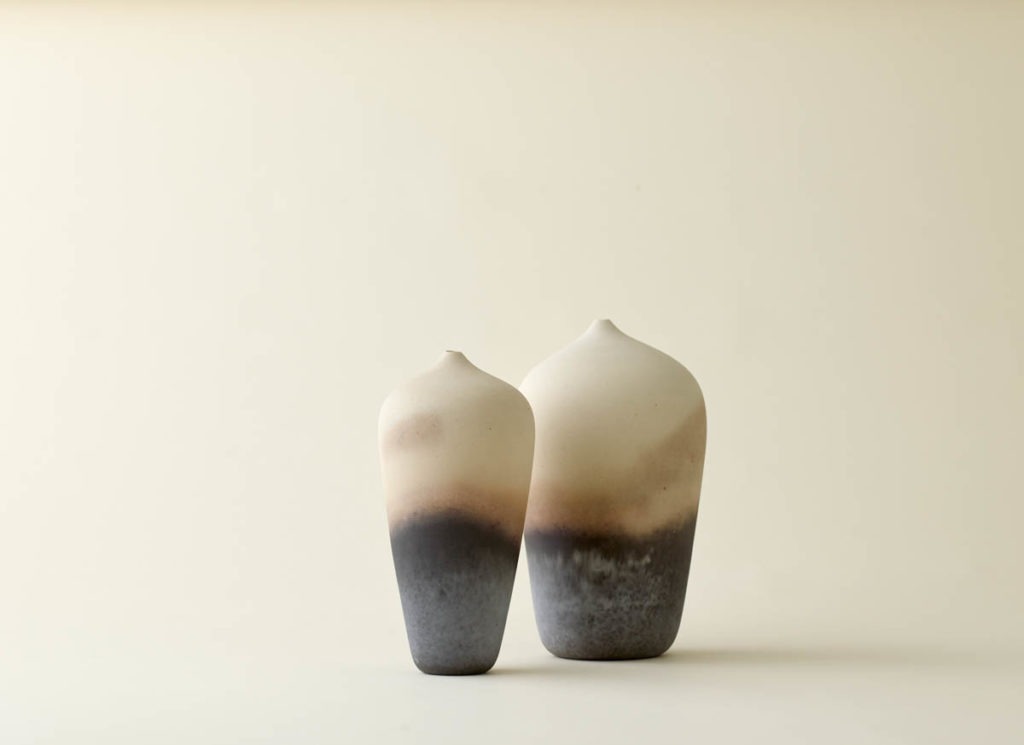 Midori Uchida creates glowing twilight scenery on perfectly rounded ceramic forms. This series of ‘Landscape’ vessels are saggar (protective pot) fired. Rice husks encased within the saggar moulds holding the vessels burn away in the firing process, leaving dramatic sunset hues across the finely formed surface of the vessel. The making and the firing of the vessels are controlled intentional processes. Uchida’s handbuilt forms are exquisite. Handbuilding is the technique chosen deliberately as it allows the closest control of the shape. She attains the smooth surface lines by shaving and sanding the leather hard vessel. Hatta’s final surfaces are created by the carbonization firing process. The rice husks inside the saggar burn away and leave the twilight tones and hues on the surface of her pots – art entrusted to the mysterious powers of chance. 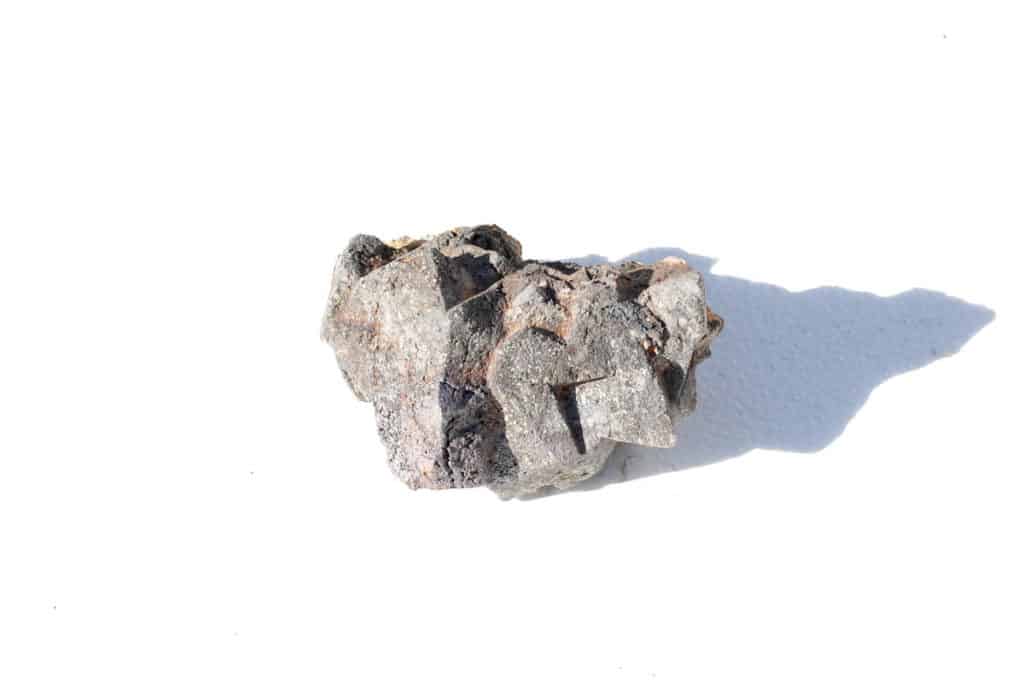 Currently living and working in Shizuoka

Takayuki Watanabe’s ceramic practice is deeply connected to his thoughts on the natural world and its processes. Here he discusses the series of work he has produced for余韻 (yo-in) afterglow:

These works are made from pieces of earth from the sedimentary strata near my house, and from the fire which burned the tree that grew in that soil. I think that it is a very natural event. In the first place earth’s rock has been altered over a long period of time, but by changing the energy of the tree into a fire with a device called a kiln, giving it to the earth, it is possible to make a totally new substance similar to the original rock. This process is finding beauty. The finished pieces are only the shadow of this phenomenon, but each one of them is born with their own story, so it is very interesting. In this phenomenon, I am always looking forward to finding amazing things that I myself could not predict at all.   In this work, abandoning any preconceived image, I simply picked up the piece of earth. Using the minimum number of steps I chamfered the sides, like you would when making jewels. Then I fired it. In this way, the fired earth comes closer to the nature of the host rock and echoes the changes that occurred over time. This theme is a familiar element in my work. 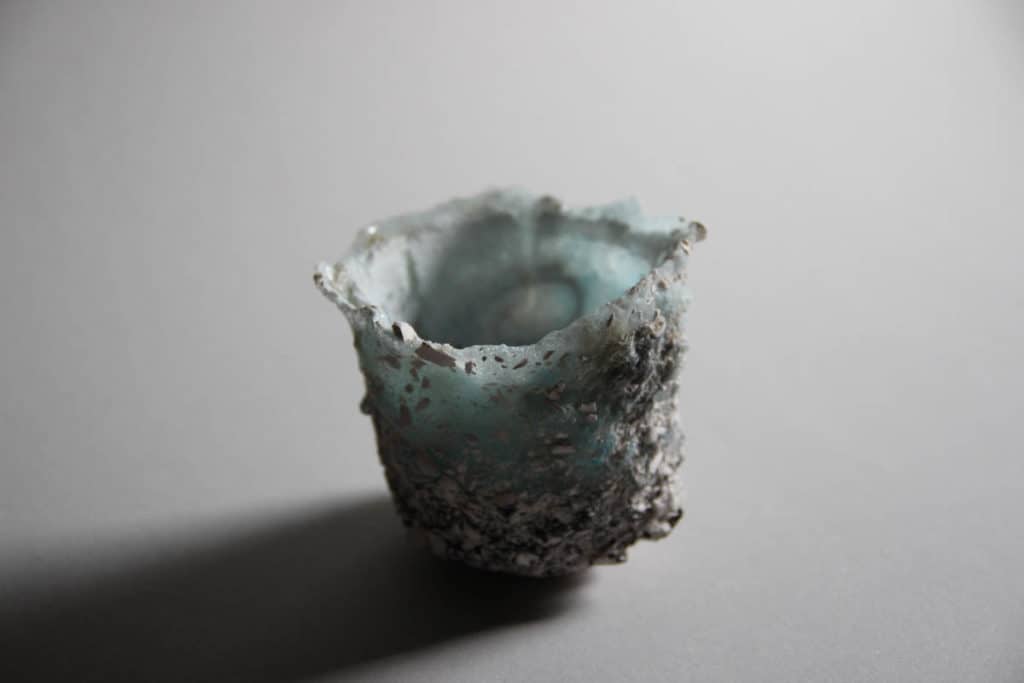 Masaomi Yasunaga’s work is made of what would traditionally be thought of as glaze materials. He makes this material himself, using combinations of natural elements such as feldspar and sand. His material ‘recipes’ have taken years of experimentation to create. By pinching and kneading, he creates a clay-like substance from these glaze materials. It forms a glass-like clay. Yasunaga’s pieces are reminiscent of opaque glass-like shells washed upon the beach. Large grits of sand cling to the surface on some works. His pieces are hand built and then fired, using a saggar mould to support the piece being fired inside. The sand and grits clinging to the outside of his finished works are sometimes transferred to the piece from the inside of the saggar mould.