Getting a handle on the making revival 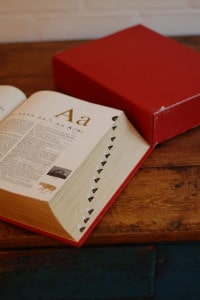 Sorry. I’ve begun this essay with a definition of an obscure word. Don’t you hate that?

When Kevin Murray and I were having a coffee during his visit to Adelaide in December of 2015, he was musing about the presence or absence of handles on ceramics. We talked a little about their history, their use, their cultural associations and all the while I was trying to remember a word I had heard only a couple of days before, a word used to describe both a handle and object that possessed a handle. Kevin was keen on teasing out the metaphoric possibilities of handles and how that might find its way into a discussion of the state of contemporary ceramics, and this seemed like an interesting idea, especially considering I’d heard that word …. well, that word I couldn’t remember. It came to me after he left, of course. Ansate.

I do like the idea of ceramics being handled, at least in the sense that they are used, but as someone who runs a production workshop, the presence or absence of an actual, as opposed to a metaphoric, handle is both a matter of design and of economics. A handle adds time to the process of making and time is money. A hand-thrown teacup and saucer is a surprisingly expensive item to make, and as for a teapot! A teapot has a body, a lid, a spout and a handle – very complicated, very time-consuming. This might be the reason that many people are keen on making tea-bowls, and they do have the advantage of being satisfying and relatively easy to make, at least in terms of the technique involved. Having said that, I never use tea bowls to drink tea, although I do love making them and they come in handy for peanuts. Even the Japanese normally don’t drink tea from a tea-bowl, despite these objects being held up as the be all and end all of Oriental ceramics. The Japanese usually drink tea from a beaker without a handle, waiting until it is cool enough to hold. I drink coffee from a beaker, because coffee is rarely that hot, but for tea I use a cup or a mug, with a handle, because I like black tea (red tea, actually – Rooibos), and tea without milk makes the cup really hot.

Handles are for heat and sometimes for leverage, as with a jug, but a jug only needs a handle when the vessel becomes too big to be grasped by the hand, when it becomes ansate. Phew, glad we got that lot out of the way! 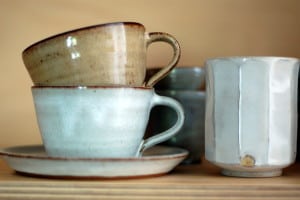 The only reason that I know what this word ‘ansate’ means is because, a few days before I had coffee with Kevin, my wife and I were sitting down after work and she was entertaining us by reading out some obscure words from a splendid old American Heritage Dictionary of the English Language.

It’s a lovely book with red covers and gold edges, a cross between an encyclopedia and a dictionary, with lots of little drawings and photographs in the margins. Considering how long she’s had the book it’s in remarkably good condition, although it does have a matching box, which helps keep it safe. This book has moved with us to many houses (it moved again just a couple of months ago) and it has always been looked after, but it is also well made, a fine example of the book-binders craft.

And, being a book, I can tell you that the listing for ansate is directly followed by ‘ansate cross’, which is a cross with a loop on top, sometimes called an ankh; Anschluss, the political union of Austria and Germany in 1938, which obviously was not a good thing; Anslem, the name of a Saint who was Archbishop of Cantebury from 1093 to 1109; and, my favourite, anserine, meaning goose-like.

A book is always ‘handled’ if it is to be read, so it lends itself to this sort of information gathering. As I’m reading the definition of ansate I can’t help but see these other words. They are within my field of vision, within my ocular grasp. I can get a handle on it all.

In this world full of distant instants there has been a heartening reawakening of an interest in hand-making and the hand-made – it even has its own name now, the ‘makers movement’.

Whether this has come about as a reaction to the plethora of images that surround us and the speed by which they’re transmitted, or through a need to supply a form of content that shows there is a person behind the post (a sense of selfie?), the new digital seems to have reinforced the old digital, those waggly things on the end of our wrists.

Whereas the intellectual obfuscation surrounding post-modernism stifled an interest in ‘doing’ (very hard to do something if no one is sure if anything has any value), social media has led to a culture of ‘sharing’. This new kind of sharing is very convenient, in that you don’t actually have to relinquish a portion of something that is yours and give it to someone else, to hand anything over; rather, you simply let them look at something. It is the sharing of information, not of goods, but the object is still central to the equation, as is evidenced by the many sites where people digitally curate the hand-made.

The culture of sharing goes hand in hand with a return to making. Even amongst those who aspire to the avant garde, the post-post-modernists, where the notion of deconstruction (de-skilling is now in fashion) still holds sway, there is a fad for making, which probably explains the proliferation of ‘bad ceramics’ invading high-end galleries. Wonky pots are the new video, as I’m sure you’ve heard, and Grayson Perry is beginning to look a lot like Bernard Leach. These are the pots-modernists.

At the more democratic end of things, where tastes are less corrupted by an excess of excess, the return of the general public to classes and workshops, where they can learn about making, has been quite extraordinary. Not unprecedented, because there have been times in recent history where involvement in the crafts has been equally strong and maybe even stronger, but this latest resurgence is taking place without much government support. It’s crowd-funded, which is another way of saying that people are spending their own money to make something happen. 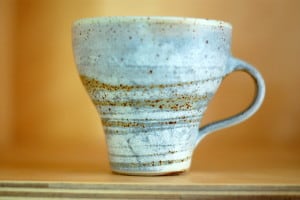 In my role as Creative Director of Ceramics at the Jam Factory I get to see it all, from working with practitioners at the highest level to training recent graduates who want to transition to professional practice, as well as running night classes for the general public, and I find it very encouraging that when I look at all of these spheres of activity they seem to be going from strength to strength.

If that means that every night class we run at the Jam Factory is full – which they are – and that all the other organizations I’m aware of are having the same level of success – which they are – then that’s great. That’s a sign that the craft ecosystem is healthy, that there’s diversity and numbers, that the rivers are flowing and the rain is falling.

There are, of course, still some problems, especially in the tertiary sector, where the range of skills has been diminished, because classes are attenuated and teachers are expected to do ever more with ever less. Current graduates coming out of a three year course are trained to the level first or second year students used to be. But that’s OK, as long as the numbers are there and other individuals and organizations are able to take up the slack. In a way, what’s happening now looks a lot like the late 1950s and early 1960s, where a smallish tertiary sector sits alongside the option of private tuition feeding a rapidly expanding sector of small manufacturers, thanks in no small measure to on-line sales platforms and the popularity of craft markets, as well as more traditional bricks and mortar shopfronts. It is a very interesting time to be involved in the crafts and it is, on the whole, a hopeful time. It just needs to be handled in the right way. 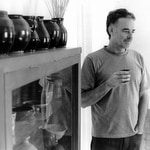 Dr. Damon Moon is currently Creative Director of Ceramics at Jam Factory Contemporary Craft and Design in Adelaide, South Australia. He is a second generation potter whose career has spanned many aspects of ceramics, from working in manufacturing to tertiary teaching, freelance writing and being an exhibiting artist.

Quarterly essay - The colonisation of cute – exploring the work of Vipoo Srivila...
Pink Terraces
To catch a flower: Love triumphs in the marriage of Sang Thong
From Samarkand to Kütahya: A Silk Road of shared skills
Ceramic art from Gallery VOICE
The shape of wan
Ropework: Soft garniture for life
Remembering when the world came to Kyoto in 1978