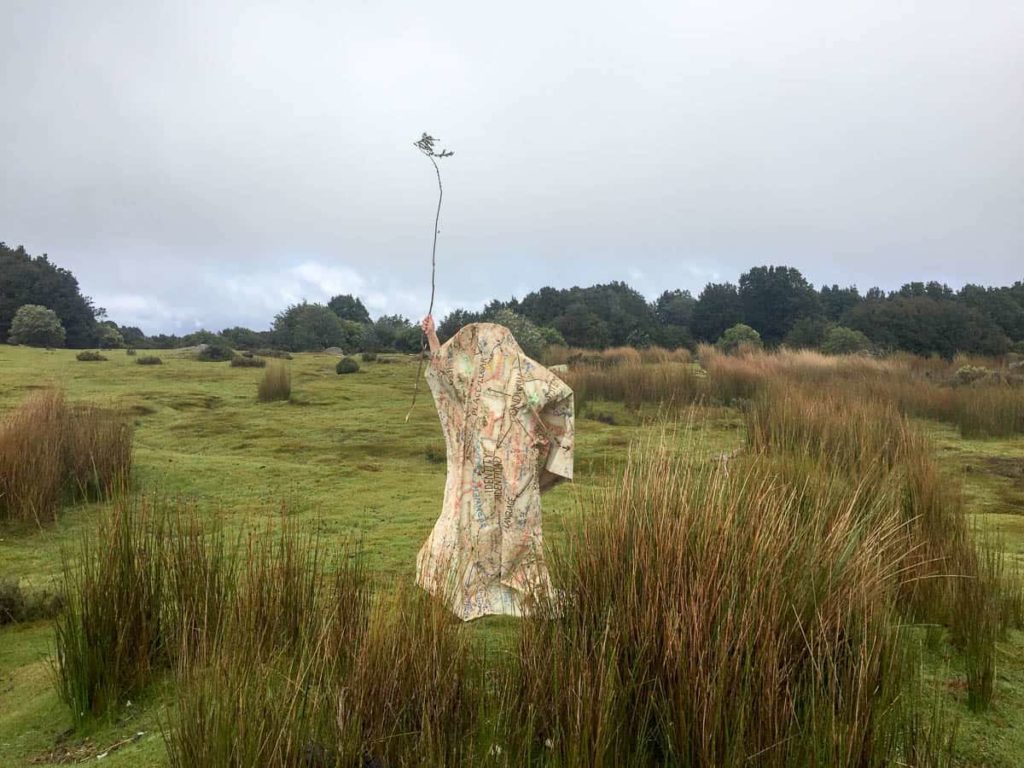 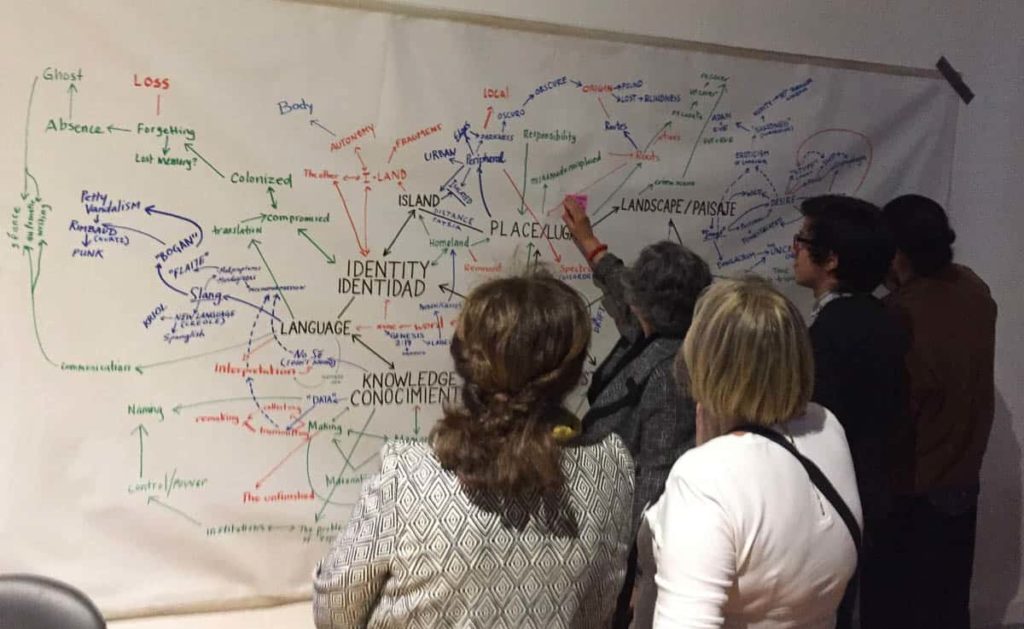 At MAC in Santiago, Chile 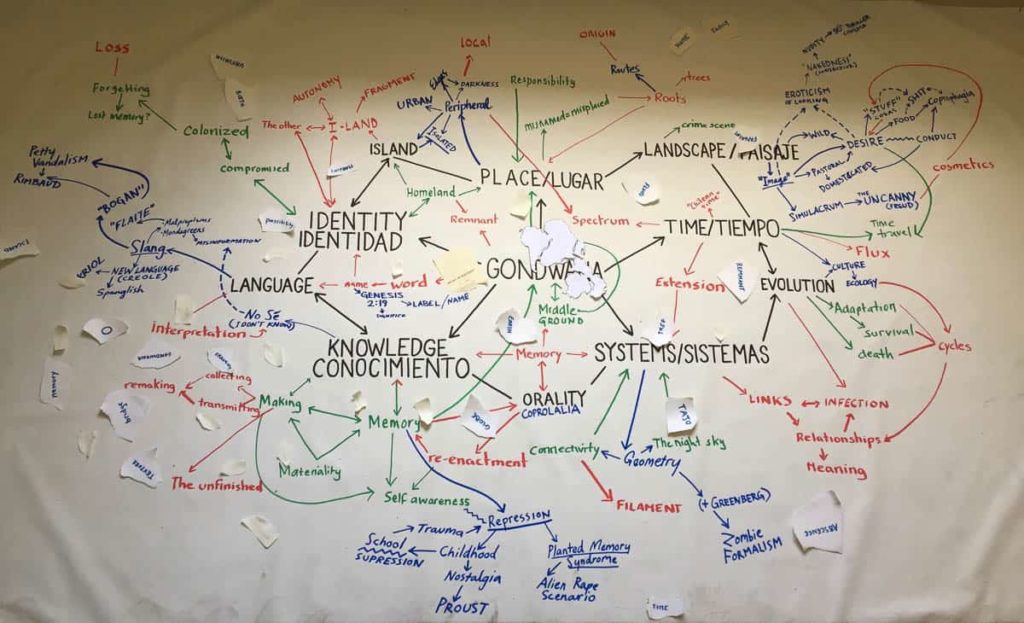 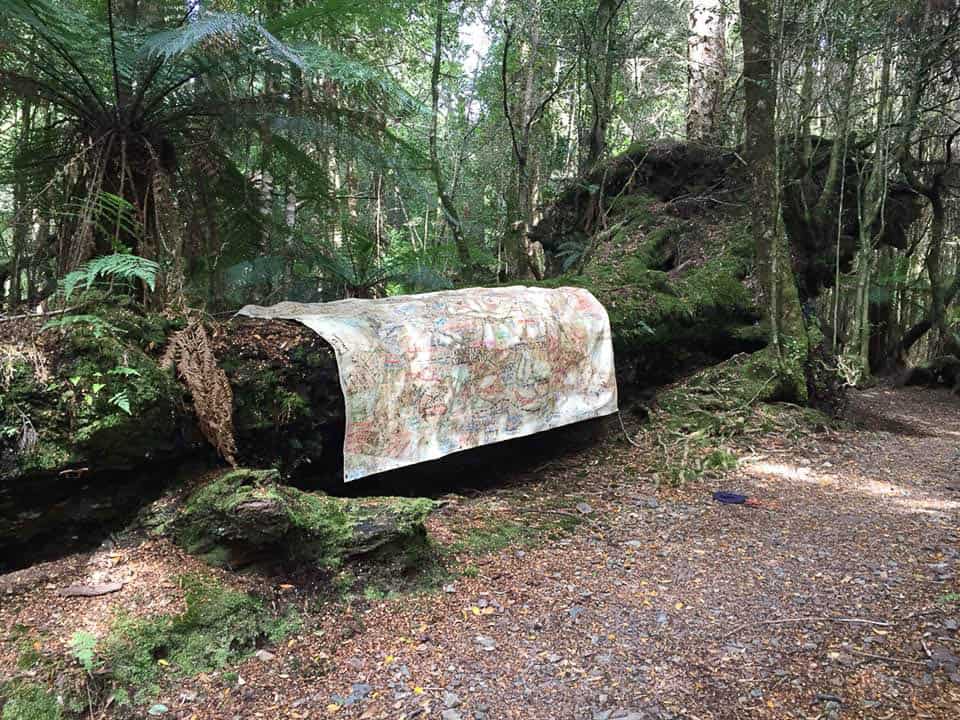 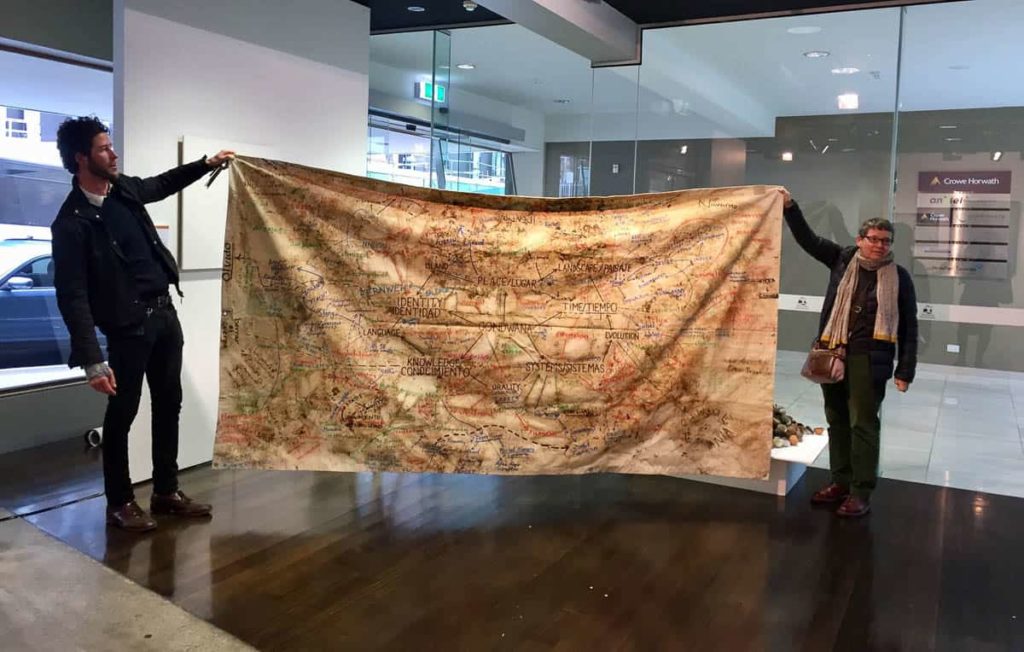 Black Matter is an Australia-Chile residency-based project that translates Gondwanian connections. In this iteration, three artists travel between Tasmania and Chile to create a south-south knowledge system that extends across the latitude.

Gondwana is a mirage island hidden somewhere in between Chile and Tasmania. It appears in the form of a tangible canvas but yet its meaning is more obscure. To me, it is a holm of cultural connections that float on the Pacific Ocean and breathe, as lymph, through the veins of the ancient Southern Beech.

Gondwana has a thin skin: red ochre on one side, coal black on the other. This double skin epidermis coats the frontier line that separated two worlds and shelters the flux of ancient spates that co-exist here, under the same dome.

“My hand told me that the world could not be written”- says Mapuche poet Leonel Lienlaf. And yet here Gondwana exists as a geography of words that open a portal of communication between my native Chile and my Tasmanian home. Hermandad, connectivity, cai cai vilu tern tern vilu and fernweh, resonate from deep coalsacks and profound roots as they shape a cartography where memory resists oblivion.

On the islands of Tasmania, Chiloé and Isla Navarino, a generation of evergreen myrtle beeches, native coigües, deciduous tanglefoots, lengas and endemic ñirres, look up to the Milky Way. Le dan la cara a lo desconocido, which means: they deal with the unknown. In a display of distinctive wedge-shape leaves, the Southern beeches emit an aura that glows from the Tasman Sea to the Estrecho de Magallanes.

Some beeches were lost in battle

during the last glacial storm.

Others sheltered on the highlands,

And followed the great river

that above had marked their way.

Today, those bodies left down under

and those that shine up high,

are imprints to be unearthed

as destruction claims our lands.

My great grandfathers escaped the turmoil of the civil wars that scarred Europe at the end of the nineteenth century. They sailed to Chile from Piemont and Haute Savoie and settled in Valparaíso and Pailahuenque, respectively.

Many years later, my mother was exiled by the military and the letter L was stamped on my passport. Limitado para circular pushed us north and back to Piemont, further diverting my course from returning South.

In Tasmania, I was reunited with the ancient beech. Here, L gradually changed its meaning and as the roots of language reconnected with the biological environment, the mirage island of Gondwana resurfaced as a magic carpet: a skin of woven voices that echo in-between the Southern corners of the aquí and the más allá.

Look at the night sky

It flickers like the fire that claimed so many of us.

Miles to go before I rest.

Relieved by the sameness, charged by the difference.

This city seemed trapped, like being in the folds, skin to skin,

behind the bent knee of an interesting person, with the promise of more beyond, but unsure how to prise its way out.

Santiago is a state of mind.

I could be lazy or involved. I could drown in lattes in clean bookstores while I feared my lack of youthful enterprise and endeavour, wrought from project exhaustion and the decades it took to get here.

This country is a challenge.

Chilean history is geologic. The deep, the distant and the recent histories of tumult are all in continual abrasion and collision. And each story is preserved, more fused than layered, but with the promise of being excavatable.

It is always a starry night out of Santiago. The people of Chile are always wide awake. It is as though impact from irregular meteor showers has overwhelmed the place with fundamental trauma. Such matter always surfaces. Was it this, I imagine, that created an impermeable shell and a resilience about the people who encircled me? Or was it my lack of language, of Spanish, and lack of history, their history, that continues to push and pull me, like a fever or fugue?

There, artists question more than speak, and think more alike, to me, than I do with most in Australia. Everything is serious and real, even or especially if carried within, whether paradox, sentiment, inheritance, responsibility, group memory. Nothing is a joke. Sometimes I sense I left part of me there, and I think, periodically since I left, what if I phoned myself there now? +56 9744 87336. and that person would answer, in Spanish, and say Estoy ocupada, tengo pega que hacer aquí: I am busy, I have work to do here

That psychological mountain range Los Andes hove its way upward to ensure this country is the perfect island, the mirage of an island, the impossible island. And so, this place is a gift, a hothouse for extremes, a kind of Galapagos for reinvention. Chile is a place to hide and seek.

All the imaginings of origins and endings are caught in eddys off this coastline where the Teignmouth Electron could have better been beached. Where in Punta Arenas I tasted the airborne salt of the sea and felt the presence of men who had fled capture from their SS deeds in the breath of their grandchildren

There I witnessed a basket being woven in the manner of my Tasmanian Aboriginal ancestors, my Old People, and with the same plants and at the same latitude for the same purpose, and with, I felt sure, the same deftness, and unremarkable ordinariness of an everyday task. And the pure power and adrenalin I felt sharing that moment of unfettered nonchalant cultural action, that I hadn’t witnessed or done as such for many generations, took my breath away and made my eyes glisten with the possibility.

Santiago is a walled city. A fortress. It’s an oddly familiar experience for a Hobartian.

Los Andes resemble our kunanyi… like cousins or something.

The mountain is a comforting, seemingly benevolent, presence. You can tell the time, assess the weather and navigate by it. It is where the water comes from.

They both remind you of time. Long time. Deep time.

You look at the mountains with their strata, and ask:

“Which rivers were you?”

“How do you two know each other?”

At the opening of the new contemporary art space in Cerillos, there was a DJ playing generic dance music. “Too European”, somebody said. Too North American. It’s true. We of the South – We don’t need to endear ourselves to you. We have no problem with provincialism.

We were walking around La Victoria on Election Day. He without English, myself sin español. Near a place that sold sopapillas and completos (potato cakes and hotdogs, except better), a car passed with Reggaeton triplet beats blaring from tinny speakers. “You like Reggaeton?” he asked. I think it’s polite to complement its rhythm, more complex than 4/4 punk and hippy jams common to Tasmania. He interjects: “It’s a virus – A Puerto Rican virus”.

In the Museo de la Memoria y los Derechos Humanos, opposite a testimonial video of survivors of the dictatorship, a young couple made out in the corner.

We could draw pictures. But you don’t want to draw pictures. We could go to the theatre, but I’m always guessing the narrative, comprehending the occasional word, laughing when the audience laughs, trying not to fall asleep. Well, there is a party tonight. We could consume San Pedro.

It kicks in. Then an epiphany. You see the edges around everything: the edges of the city, of society, of language.

On the street below are cabbies and drunks… the dogs are asleep somewhere. The city is transformed at night. We stick to the edges of darkness – the paths made for us by streetlights. We are scared of the unknown, but the edge is interesting.

There was this painting by Velásquez in the Museo de Bellas Artes – a nude woman, of course. It was striking how the shadows of the skin almost showed the ochre imprimatura while the highlights of her shoulder and upper arm were built up with layers of zinc white, creating a real and reflective skin.

Adjacent was “Lucette” – another nude woman – by the Chilean Julio Fossa Calderón. Her skin was similarly thick with paint but had become grotesque. The thick paint had cracked, turned green – perhaps due to lead or excessive varnishing – and had aged to resemble rotting flesh… Pygmalion’s nightmare

It’s late. I’m on the roof, drawing pictures. Tara is eating insects. They come to bang their heads against fluorescent tubes and she picks them off. I watch the sex workers on the corner of 10 de Julio and Avenida Portugal. The cars keep coming. The same women return after each job.