Beyond pink: The moment is the haven

Delta into the Caspian Sea – Save me, Anna Taylor, 2017; photo Chris Sanders

Anna Taylor creates an art of hope, for herself and others.

Over 2006 and 2007 I spent a period of eighteen months visiting and finally living in Kakadu in the Northern Territory while my partner worked there.

This experience has had a lasting impact on my artwork. I observed a rock with a seam running through it, reflected a river or an escarpment viewed from above. In the minutiae of nature, I observed all around me. It occurred to me the decay I saw in a leaf was just like the weaving I saw in dilly baskets; a webbing. I’ve painted aerial landscapes ever since.

I was very influenced by the baskets made by the Indigenous Yolngu women from East Arnhem Land and was lucky to learn how to make the baskets and the traditional stitches used from these elders through several opportunities, one at the Northern Territory Museum and Art Gallery where a stunning display of these baskets was held, and another time with a young Traditional Owner who had established her own business. Indigenous friends also took me out – with permission – into areas of Gunbulanya around Injalak Hill. But I was completely unable to manage the stripping of pandanus leaves!

I wanted to knit continuously, at that time to make baskets. The solution came to me as I dozed, coming home to Melbourne on a midnight flight from Darwin in 2006. I realised I could use a picture frame with nails embedded into it, using the same principle as the “Knitting Nancy” or French knitting as it also is known,  which we’d used as children to make scarves for toys.

As a multi disciplinary artist, the techniques used are developed first and foremost from the idea of the piece I want to create. Often this stems from an injustice I see around me. Australia’s brutal and shameful treatments of refugees lead me to create Deception, using knitted wire. 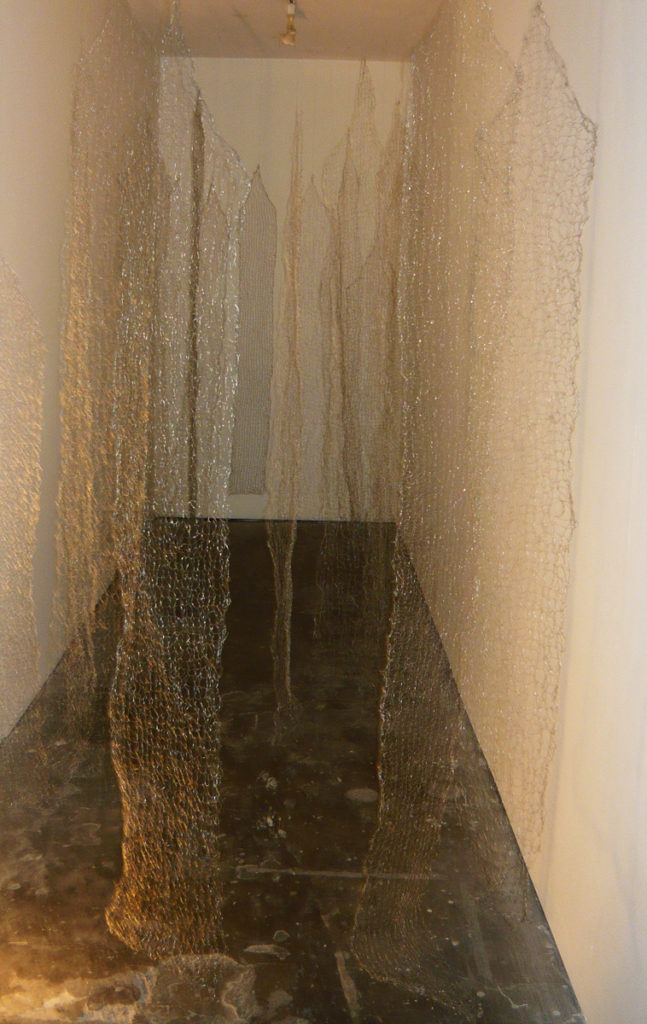 This has lead to the joy of constant learning, constant problem solving and discussions with others. Nothing occurs in isolation. As we are part of nature, so too are we utterly interdependent on one another.

My exhibition in 2018 Save me was created throughout chemotherapy, radiation treatment and four surgeries for breast cancer. When the title came to me I was referring to our beautiful earth rather than myself, although the name did occur to me several hours after learning the egg sized lump I’d found was malignant. I’ve always found this humorous; who needed saving?

It has been a three year saga. And now it is done! Through making and creating, and the sheer joy of colour I managed to stay in my own life, rather than succumbing to being a cancer patient, and the amorphous “pinkification” of cancer. Having cancer is the most surreal experience; utterly bizarre.

I’ve since made many sculptures using the continuous knitting technique, examples are below, including the Crustacean.

“Rivers of Bone” was created using this principal by knitting with wire, pushing the bones through as I went. 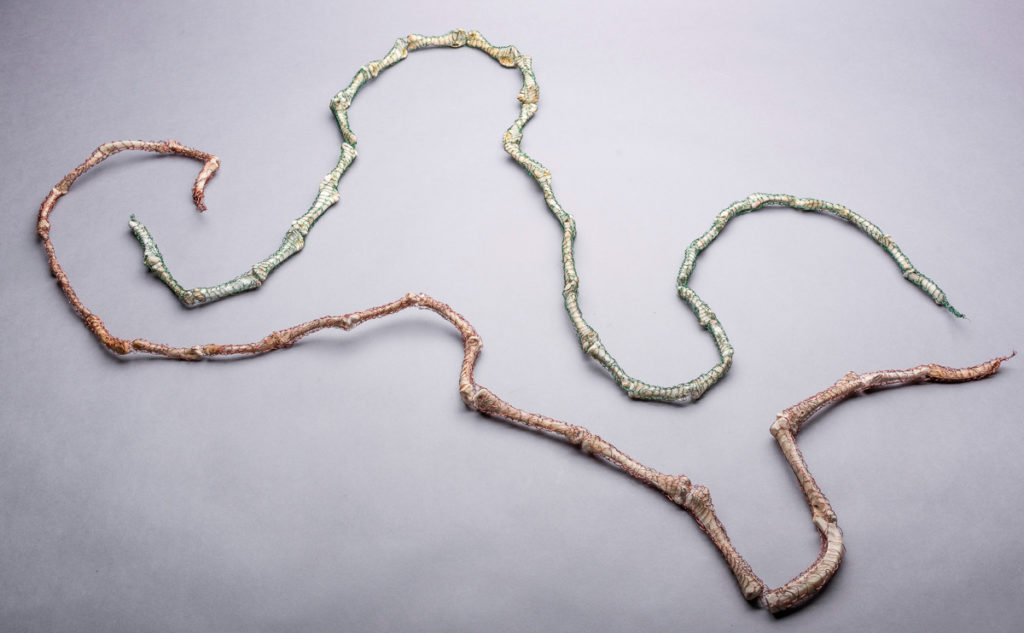 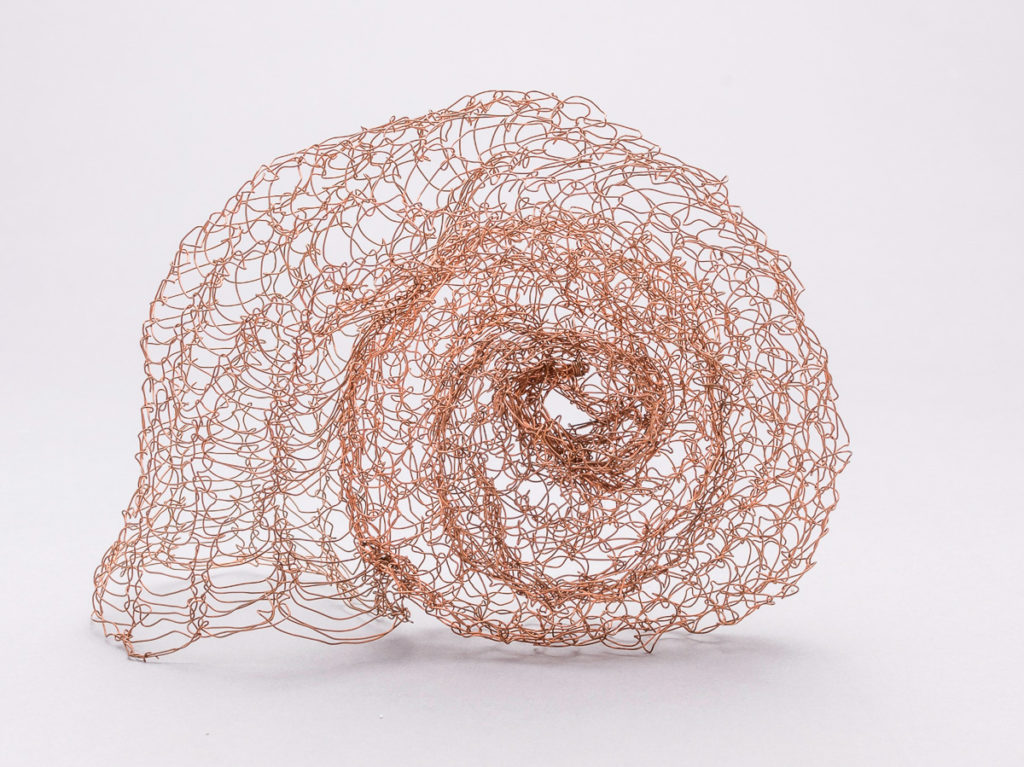 I also created an installation of Western Australian wildflowers cast from wishbones which became spider orchids.

Creating the Spider Orchids was difficult; they were fine and fragile. I cast tiny wishbones from chickens into silicone and attempted to create the flowers. Whatever material I used, it seemed to crumble to dust, an interesting metaphor. I particularly like using plaster of paris. The whiteness of bones always comes to mind. This pure white is very appealing, but its fragility meant they would just snap. Finally, after discussing this vexing problem with other artists, I hit upon polyurethane for the casting of the fine bones. This was a very fine process to manage, I hadn’t used this material before and equal amounts of two substances were required. It was a very technical process and my modus operandi tends more toward the random!

Making brings us into the moment. Thinking about making takes us into other worlds, other possibilities.

“The moment is the haven, the sanctuary.”  Arnold Zable, the author of Cafe Scheherazade (2001) gave these words to a refugee who arrived in Melbourne after the Second World War. The moment is all any of us have. I have found that while making I am completely in the moment. It is indeed a sanctuary.

This essay is dedicated to my friend, Nadia Morando whom I met while we were both having treatment at the Olivia Newton John Cancer and Research Centre in Melbourne. I also worked with Fiona Scottney, their senior art therapist. I deeply believe art and creativity can heal.

Throughout weeks of daily radiotherapy in 2016/17 Nadia and I exchanged notes and gifts. A most creative woman!

We both looked forward to our daily treatments knowing there would be a surprise waiting. Creativity comes in many forms. We knew immediately we wanted to do something with the notes, particularly to help others going through the same ordeal. It is an ordeal. Nadia’s skin burnt and blistered and was terribly painful. She endured several more weeks after my treatment ceased.

Our idea, discussed before her death on Wednesday August 7, 2019, is to encourage others to do something similar, to connect. As with any creative project anything is possible. If an idea is too rigid, it would be easy to miss a great idea from another person. Creating is also about connection. Two days before Nadia’s death we were able to discuss how I would turn these notes into an artist’s book during a residency at the Olivia Newton John Cancer and Research Centre in Melbourne where we met. Fiona Scottney was with us also. She spent many hours creating with Nadia. Nadia asked that I create the book in the ways we had answered each other’s notes.

During my forthcoming residency at the Olivia Newton John Cancer and Research Centre I will create a handmade book of our notes as a gift to the centre and my tribute to her and her generous family, a memento mori.

The same people meet in the waiting room each day, over many weeks. Why not get to know each other through creativity which can also be about fun. My intention during the residency is to sit with these people and create the book so they can see what I’m doing. And others might want to contribute? It is a gift.

I will also return to this centre with this edition of Garland.

The moment is all any of us have. I have found while making I am completely in the moment. It is indeed a sanctuary.

Apart from being an artist I also teach. I ran a workshop creating monoprints which Nadia attended, though other than hospital visits she’d barely left her house for weeks. We created the most joyful, colourful pieces!

Later she said those two hours were the first time she’d not thought about cancer for weeks. 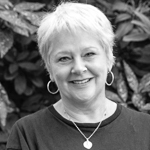 I am a multi disciplinary visual artist and teacher. I paint draw and sculpt. I live immersed in nature, hope and birdsong in Clifton Hill in Melbourne. These days my practice concerns our climate emergency, continuing my Save me project to connect others to the irrefutable fact that we are nature. I run regular workshops and weekly classes which are informal and lots of fun. There are no mistakes!

Crafting hope from the rings of the black ash
Quarterly Essay: Remembering the string figures of Yirrkala✿
“Who’s Nalda?” The influence of Eileen Keys and Pantjiti Mary McLean 🎧
How an island makes its makers: The artisans of Gabriola
Balnhdnhurr: a mark for others to follow
Up in a wool bag: Moving material in the Navajo Nation
Her Journey and our empty cups: Fiona Gavino in Escolta
Pots in Action: The ceramics project that made Instagram sparkle