Our Paiwan wedding: The importance of a dowry 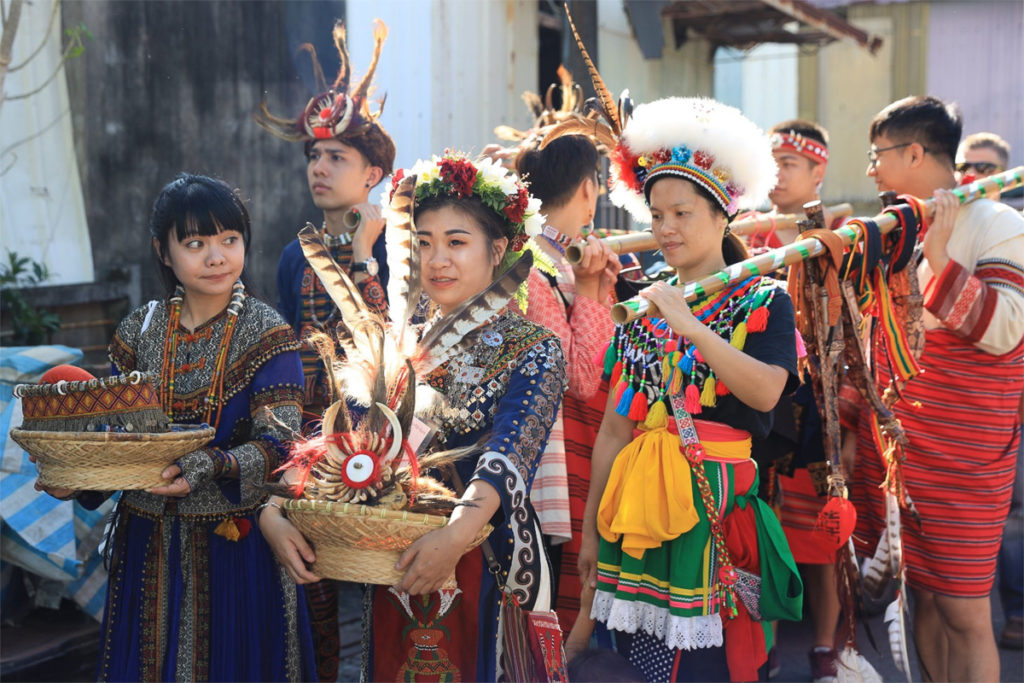 Preface – All Paiwan Indigenous names and words shall be capitalized, although the authors acknowledge that some Paiwan scholars do not do so.

Tjuvecekadan is a fairly small village by Taiwanese standards, and due to environmental disaster and pressure from colonizing forces, the descendants of Tjuvecekadan’s original founders have since been moved to the lowlands at the foot of their traditional homeland in the mountains to be joined by several other villages that suffered similar fates. It would be understandable if this displacement and the constant reminder of their “otherness” from the majority culture had left the people of Tjuvecekadan suffering from the culture and language loss that is a common theme in many Indigenous communities around the world. However, as evidenced by our recent marriage, carried out to the best of our abilities to follow the traditional practices of the ancestors, the will to remember and put into practice the lived-culture and traditional ceremonies is still strong, despite many cultural practices having fallen out of favor.

A traditional Paiwan wedding is dependent on the families involved, as Paiwan society is still heavily influenced by the traditional hierarchical family positions. The social status carried by a family can change over time, and its influence has become slightly muted somewhat especially due to the Christian churches that have altered the socio-political landscape of the village, but when it comes to such ceremonies as a wedding then it has the utmost importance. 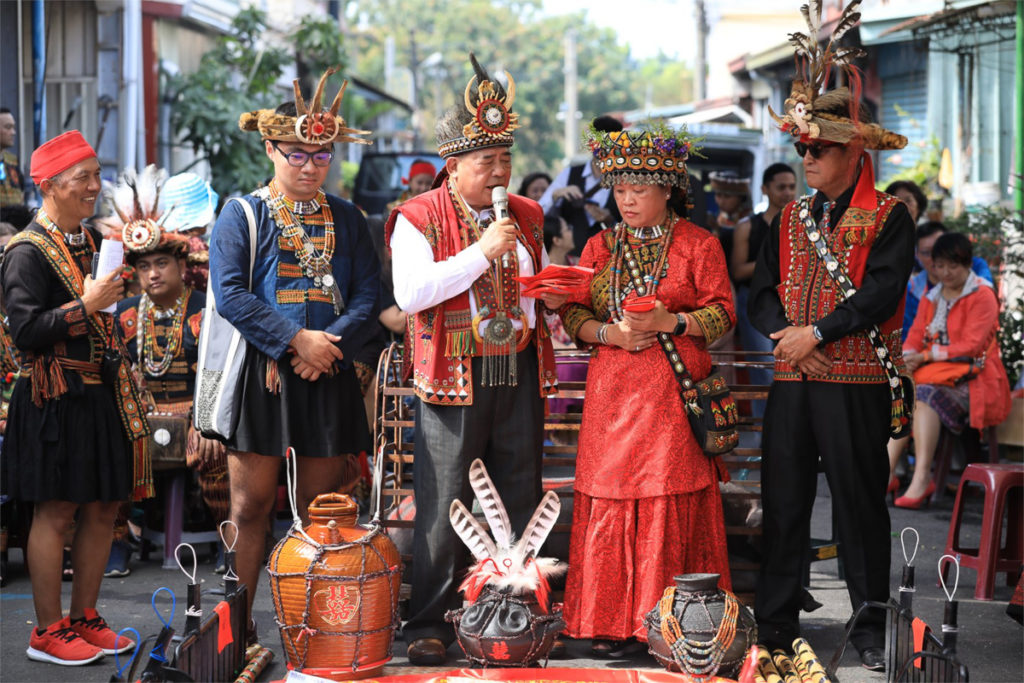 The Curimudjuq clan, whose ancestors founded Tjuvecekadan, continue to be the traditional representatives of the community. Through our wedding rituals, the strength of the culture was evidenced in many ways; the pulingau (traditional female faith practitioners) carrying out the blessing rituals, the remembrance of the ancient songs, and the dowry gifts given by groom’s family to the bride’s.

These dowry gifts, decided upon by the bride’s family through discussion with the elders, are comprised of practical tools for helping start a new family, ceremonial items such as ritual jars representing the spirits of the ancestors, food and drink, traditional clothing and jewelry, and swords for binding both groom and bride’s brothers in a pact. The sum total of these gifts represents not just the willingness of the groom to abide by the traditions of the community, but also signify the ability of the groom to provide for the family. Though in the context of the early twenty-first century, they also represent a continuation of culture that is adaptive (for example, several crates of Coca Cola and cherry lollipops were given alongside the more traditional gifts).

What these gifts represent for the bride and her family is complicated. Most traditional handicrafts, especially clothing, are generally handed down from generation to generation as long as the previous generation had the ability to afford such items or skills to make them. Not all did, nor do they do now as to produce new ones can be prohibitively expensive, especially for younger people, if following traditional production methods. Possibly due to this very reason, many young people struggle to feel the cultural significance of many of the more traditional items as the material qualities outweigh the intangible qualities they possess. With clothing being potentially one of the most expensive of the dowry gifts, many younger people who are unable to inherit any will purchase cheaper, mass-produced clothing from mostly Non-Indigenous owned businesses that mainly cater to tourists or even will rent from other families. This can then further lead younger Paiwan people to feel a disconnect between their cultural heritage and the expectations put upon them by the elders and Non-Indigenous people in wanting to not just preserve but also to revive and live the culture.

Traditional Paiwan clothing is possibly the most visibly obvious signifiers of the tribe, as they are very distinct from those worn by the other fifteen recognized Indigenous peoples of Taiwan. The clothes, especially women’s, is made from thick woven linen with designs in bead-work, shell, and old coins. It’s uncommon to see people wearing traditional clothes in daily life in and around the community, though some of the older people will do so.

The beads used to decorate the clothing may now be produced in China, and the linen made by factory instead of from an elder’s loom, but the clothes when completed with designs (worn and placed in concordance with the wearer’s family’s hierarchy) and worn together with a traditional headdress and glass-bead jewelry is seen by many as a symbol of power that has taken on something of a performative function. This gives the wearer something to be proud of and young people can feel that through the clothes their Paiwan “character” is strengthened.

It’s been important for the Curimudjuq family, and the wider Tjuvecekadan community, to see the respect given to such traditional items, especially as all of the objects prepared by the groom were “new” (some, such as the jar were made many years ago by the craftsman). The clothes were designed by the women of skill who still hold the knowledge of what designs are befitting a chief, the swords were forged by a man who learnt the basics from an older family member, and the jewelry strung together by the owner of a local shop. All of the creators may not be considered young, but they certainly aren’t old enough that there is a danger in these skills being lost before there’s the chance to impart them on the younger generation. 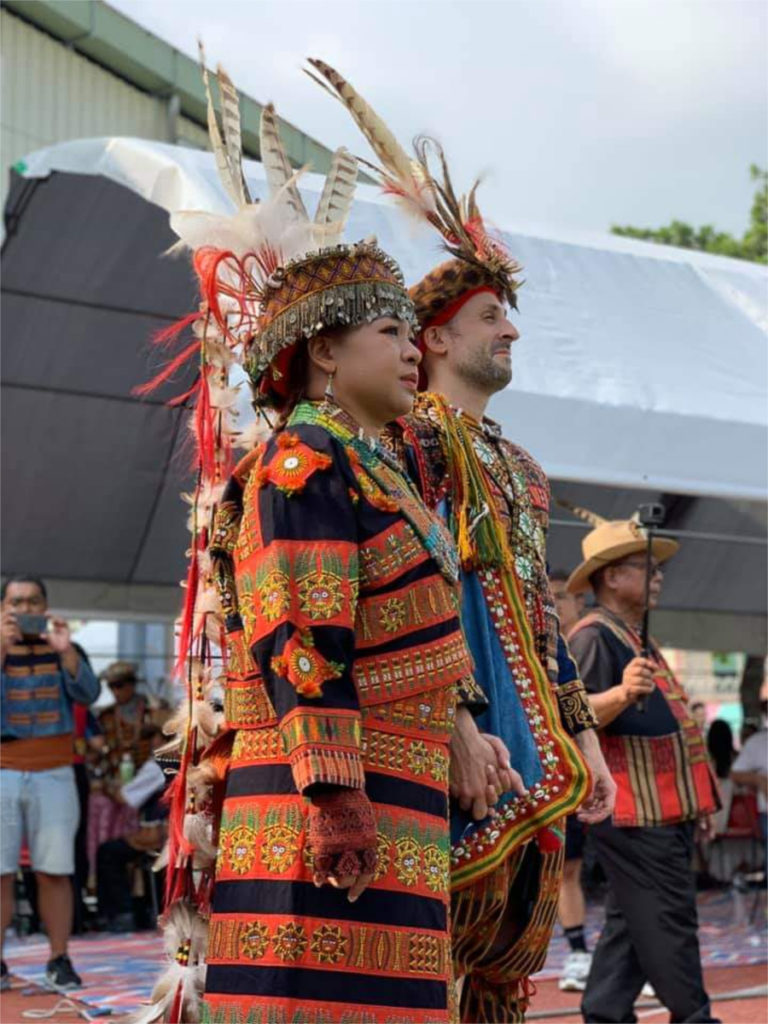 The culture of the Paiwan people has been little explored outside of Taiwan. Even recording the nature of the dowry gifts necessary for a good wedding is knowledge of importance for future generations. A difficulty for our wedding was that no-one of such a high chief status has been married in the community for over thirty years, and so the elders were relied upon to assist. Sadly that will not be the case for the current children of the village. Our hope though, is that in recording the processes of our ceremony this tradition can continue and will inspire other young people to record their own family’s practices. When it comes to the craftspeople, who are in no small way supported financially by families commissioning them for dowry gifts, then the local traditional crafts can also continue to attract young people to seek them out to study their techniques. 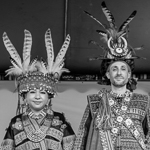 Dremedreman Curimudjuq (Liao Min) is the first-born child of the mamazangilan (high chief) of the Tjuvecekedan community. She is currently a lecturer in creative industry management and Indigenous culture at Shih-Chien University, Kaohsiung Campus. Daniel C. Moore is a researcher focusing on the folklore of the southern Paiwan communities, and recently graduated with an MA from National Cheng-Kung University with a thesis on the semiotics of Indigenous art marketing in Taiwan. Both authors just completed their traditional Paiwan wedding, and split their time between the village and Tainan city.

Living with dragons
When the land becomes a jewel
Te Hosek’en Harw: The Edge of the World
Heirloom: a celebration of herstories 🇵🇱
The craft heritage revival in downtown Hong Kong
Pillan: The spirit of the volcano
The Kam blues: Indigo-dyed textiles of the Kam/Dong minority in China
Why a Japanese lacquer master sought a surfing legend