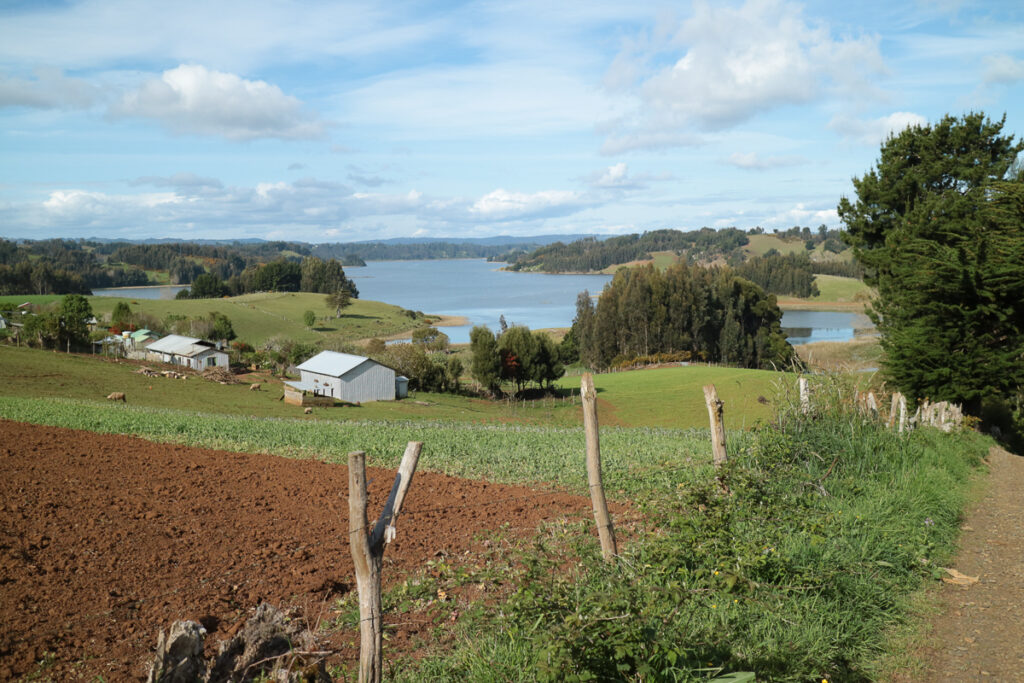 Magdalena Cattan-Lavin travels south to learn about the Mapuche string bag and how its popularity has been revived.

Puerto Saavedra is a coastal village located in Araucanía region in Southern Chile, part of Wallmapu territory, the ancestral land of Mapuche people. The town has access to Lake Budi, a prominent salted water lake that has a significant symbolic and territorial value for the Lafkenche communities (meaning the Mapuches from the coast: lafken is  sea and che is people).

A significant number of people from these communities are dedicated to traditional Mapuche crafts. The main disciplines are witral weaving (Mapuche vertical loom) and natural fibre basketry. These artisanal pieces are usually sold in traditional tourist markets during summer and in specialised stores the rest of the year. Although the improvement of economic income is a central motivation to become an artisan, the communities also see in this activity a way to exhibit, preserve, maintain their people’s creative ancestral, and current, identity.

Possibly, one of the most emblematic craftworks produced in Saavedra is the pilwa, a net bag made of a rope of chupón (Greigia sp) leaves, using a technique that has not changed in 250 years. 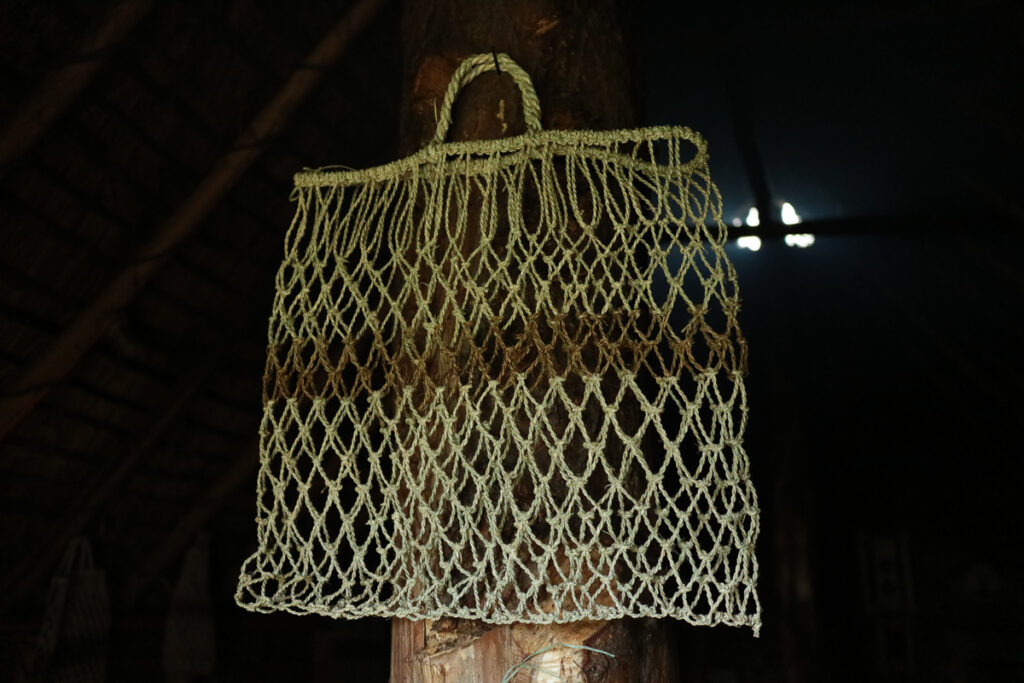 My research interest in Pilwas took me to Puerto Saavedra for the first time during the southern cone spring of 2017, and later in the autumn of 2019. My aim was to discover pilwa’s world beyond the object, in its territorial context through listening makers’ narratives. During these trips, I met three generous matriarchal families, lead by Maria, Audolia and Elena, who opened their houses to share their stories, knowledge and pilwas with me.

Originally, pilwas were worn by women as a cross body haversack to collect shellfish in the coast. With time, probably in the nineteenth century, the handle was shortened to be carried as a shopping bag for groceries, fruits and vegetables.

During the 1950s, Audolia, who learnt to weave Pilwas from her maternal line, was a little girl. She remembers the whole family, father, mother, grandparents and children, would weave during the evenings and prepare packages of fifteen to twenty pilwas to be sold or exchanged the next morning. At that time, pilwa worked as currency for the artisans. In fact, her mother would go on a daily walk of four kilometres from Conin Budi area to Puerto Saavedra, to exchange them for basic groceries such as sugar, flour, Yerba mate and oil, with traveller wholesalers who moved the bags from the countryside to the cities.  She started to join her mother in these walks when she was thirteen years old, a time when weaving pilwas had a negative connotation because it was mainly a survival activity for the most impoverished indigenous communities. However, Audolia has always felt grateful and proud of her work as a pilwa artisan as she mentioned un one of our conversations:

“I love pilwa, I love chupon, wherever I go, I’m looking where is chupon? This is the work that I have. Is inside my head. It has given me money, I have advanced in life. Then, I appreciate my chupon very much.”

Until the 1970s, pilwas were popular as daily shopping bags in the countryside and big cities until the massive arrival of plastic bags during the 1980s. Then, pilwas practically disappeared from the markets, being kept as a decorative “objeto típico Chileno” (typical traditional object). However, the weaving practice never ceased and the Lafkenche communities kept producing it as a secondary activity, while the witral and pita basketry became the main craftworks.

Audolia’s daughter is also a pilwa weaver. She remembered selling pilwas for CLP $100 (equivalent to £0.15) during the mid-90s. Although she knew the pay was too little, she was happy to help. “It was something to give back to my mom,” she said, to which Audolia answered, “Yeah sure! With that coin, you bought an ice-cream.” (while laughing). Her daughter later added:

“When I learned [to weave pilwas], it was to earn money. I helped my mother to sell on Saturdays and Sundays. We walked all along the beach, and as we did not have a vehicle, we had to walk from here to the beach and back. For me it was a job, but also a happy moment. We stopped on the way to grab Nalca. We were a group, all laughing, nor tired! Since I have a conscience, I was out selling, negotiating. ”

The first grand revival for the pilwa was in 2009, when Elena won a UNESCO a Seal of Excellence for Handicrafts, bringing new attention towards the Lafkenche communities and their artisanal production. This recognition was a great encouragement for the whole community, as Audolia and Maria acknowledged because it boosted this small economy who began to receive orders again.

Between 2015 and 2016, a group of artisans participated in a training program learning to monetise and price the bags. This initiative concluded with a big production of pilwas that were sold in the leading store of Fundación Artesanías de Chile, a charity dedicated to safeguard and commercialise traditional handicrafts, together with a social media and press marketing campaign encouraging the use of pilwa as an alternative to plastic bags.

I learnt the process of material preparation and weaving at Maria’s house, while with Audolia and her daughter, I made my first Pilwa during my second trip. With Maria, I discovered that all the Lafkenche artisans work individually (or in family groups) from their homes, in the kitchens, splitting their time between house tasks, their vegetable crops, and craft production. Before my trip, I had the preconceived idea that weaving pilwas was a female activity, insomuch as the visible faces of the associative groups were primarily women. To my surprise, the artisan’s gender is not relevant for the fabrication of pilwas. In this regard, Maria mentioned that “some peñis (Mapuzungún for brother, friend) is recognised by the lamngen (Mapuzungún for sister, friend) as excellent and fast weavers, but usually they do not like to be seen”.  I also had the idea that people worked in the craftworks gathered in large groups. However, the artisan’s associations only gather for fairs, meetings, and to organise the shifts for the commercialisation spots at Puerto Saavedra:  one located in the main square and the other one, a Ruka, near playa Maule.

To make a pilwa can take up to a week, including the material gathering, preparation, and the fabrication of the final piece. It all begins with the collection of chupón leaves. 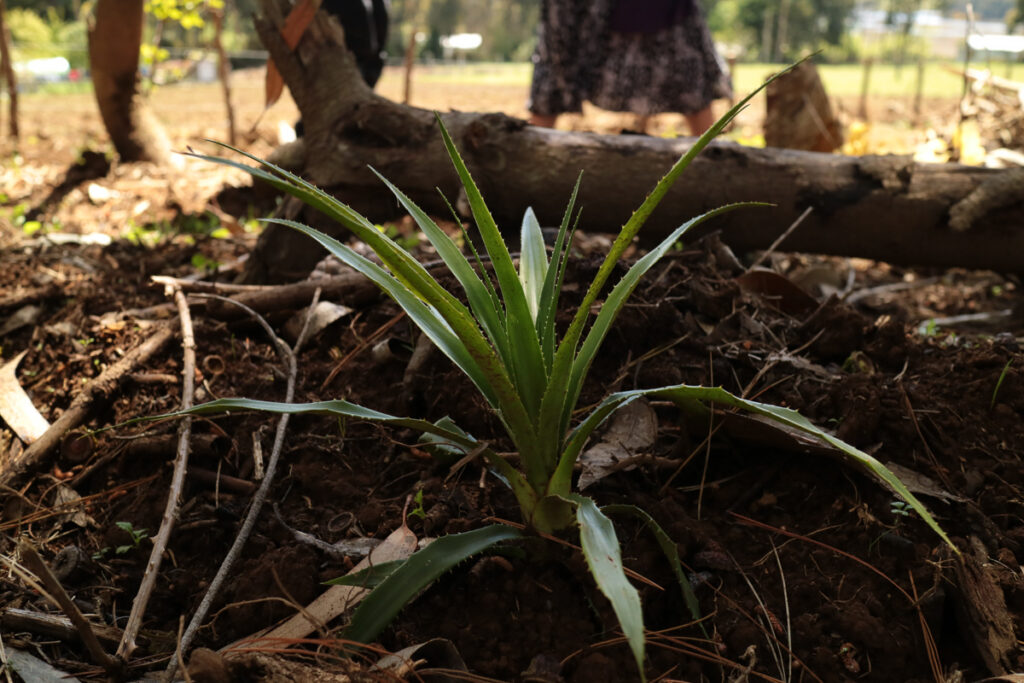 Chupón is a type of bromeliad that grows under the shadow of grand trees in the native forest. (The name chupón comes from the act to suck, in Spanish chupar,  the plant’s sweet fruit. The plant is also known as quiscal, giving pilwas the alternative name of wilal, which is locally used.) Its leaves are long and robust, with thorns along the edges, so they should be torn from the bush with working gloves. However, I saw the daughter of Audolia doing it with bare hands more than once. If they are lucky, the material can be provided from bushes nearby their houses. However, it is more common to travel long distances to find appropriate plants which are usually located inside private lands where access is not always granted.

In fact, the biggest challenge ahead for the artisans is to secure access to chupón, the principal material used to fabricate pilwas. The plant has disappeared from the most neighbouring forest spots as a consequence of the forestry industry in the region. A project led by FIA (Agrarian Innovation Organisation) has intended to cultivate the plant inside the artisans’ lands with positive results, though it is a long-term effort.

Once collected, each leaf is cleaned by removing its thorns with a thick cloth, followed by its separation into thinner fibres with a handmade brush made of wood and nails. Later, bundles of these fibres are put to dry inside the houses near the kitchen stove. Once the leaves are dry, the artisan will make the rope, which is essential for a long-lasting pilwa. The cord is made by twisting single fibres between the palms of the hand in a continuously ascendant movement. When the palms are reaching the end of the fibre, it is necessary to add a new thread to continue the rope until having a ball equivalent to 30 to 32 metres for one Pilwa. To achieve a quality rope, the calibre and tightness must be constant along the length. 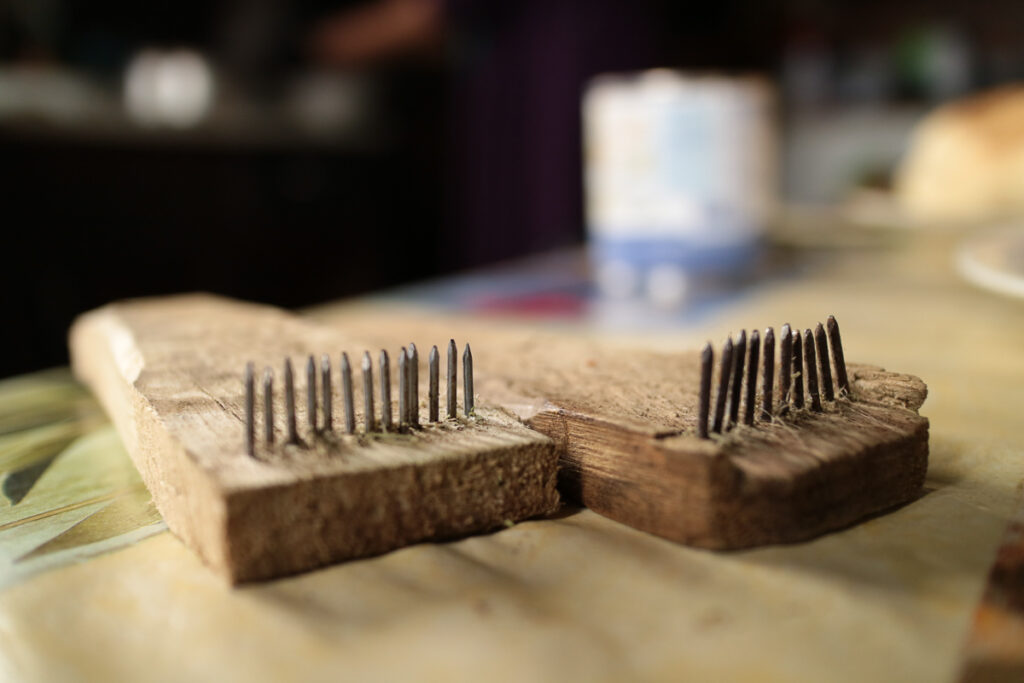 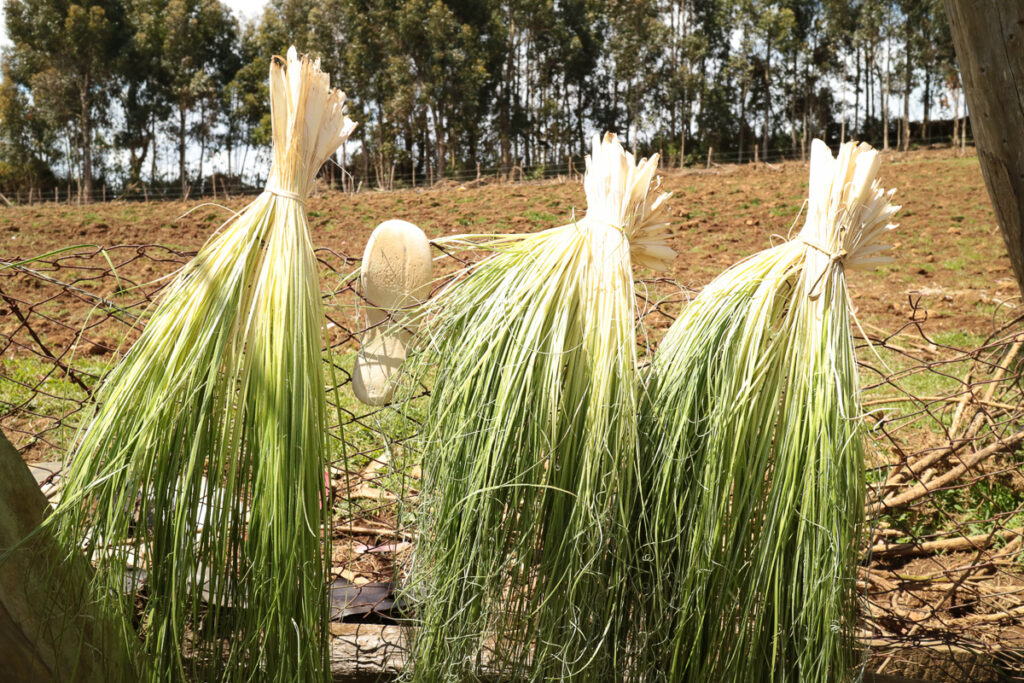 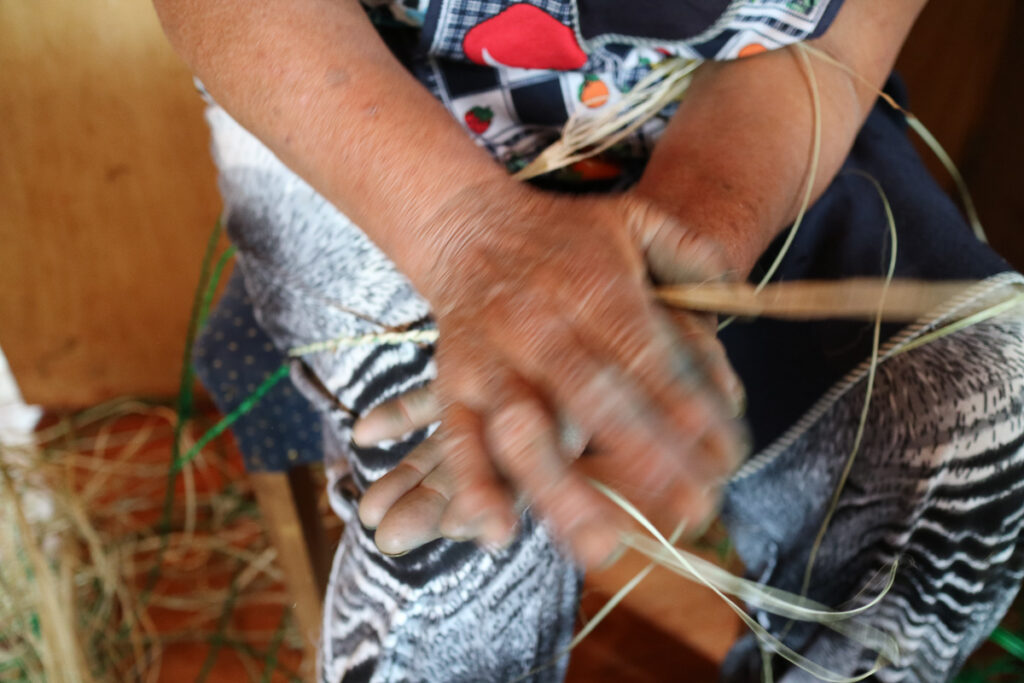 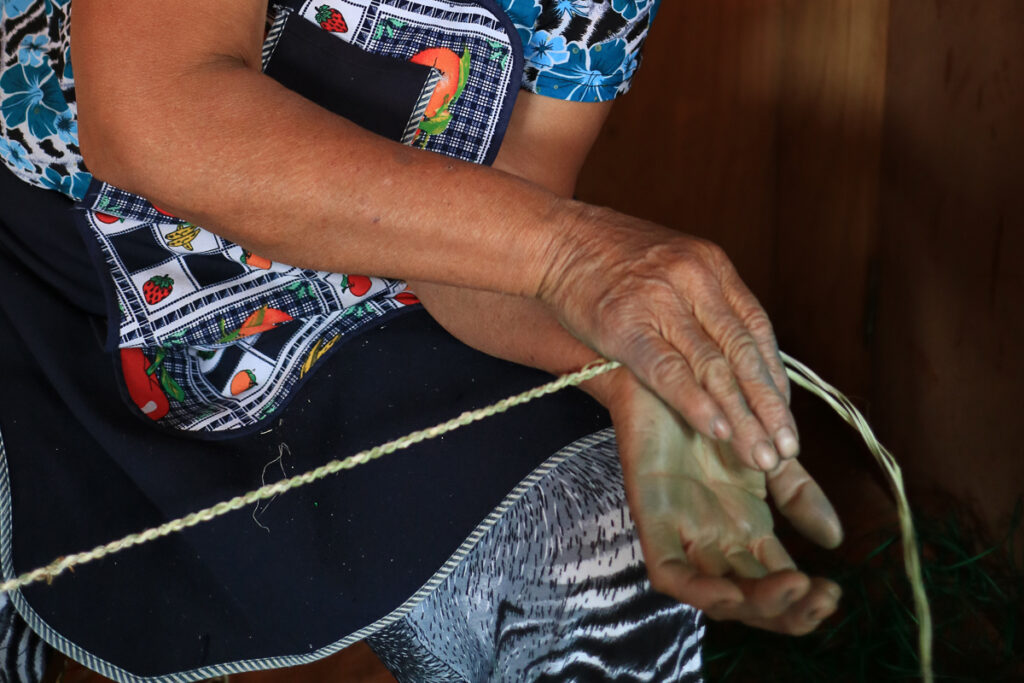 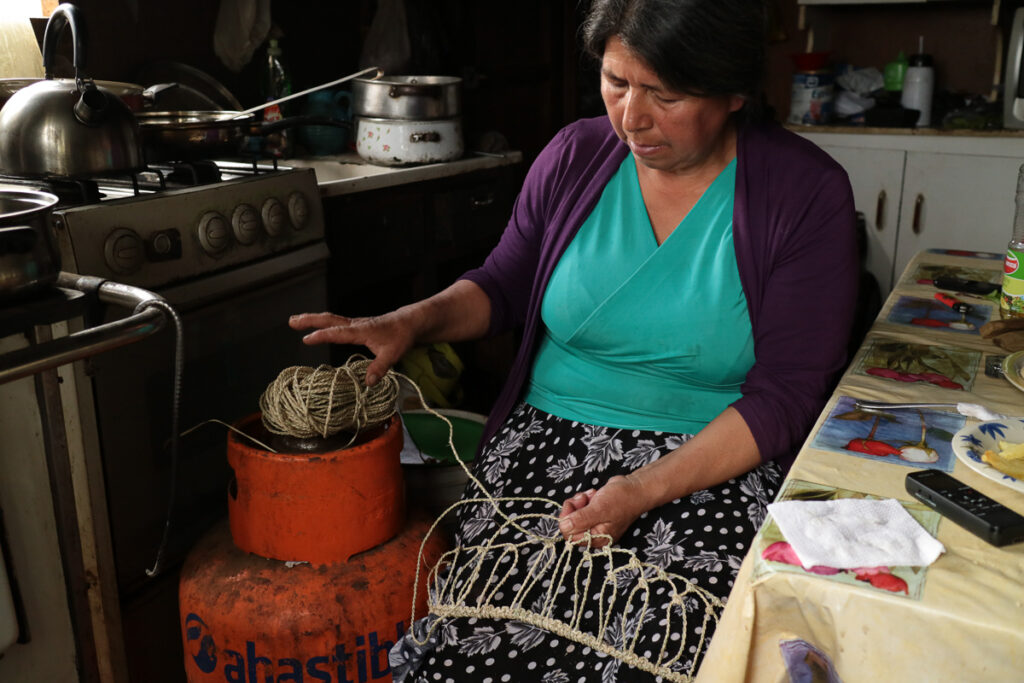 Like in other weaving techniques, the making of pilwas involves the body as well as the hands. The legs of the artisans are used as a frame to define the width of the bag and to support the weaving. The weaving technique involves consecutive knotting loops that advance horizontally until completing the whole circumference, following road by road up to the desired length which is commonly about thirty centimetres. Depending on the knotting density, the size, and the mixture of materials—as it is common to weave a section in other natural l fibres like pita—the artisan can take up to five hours to complete one piece. 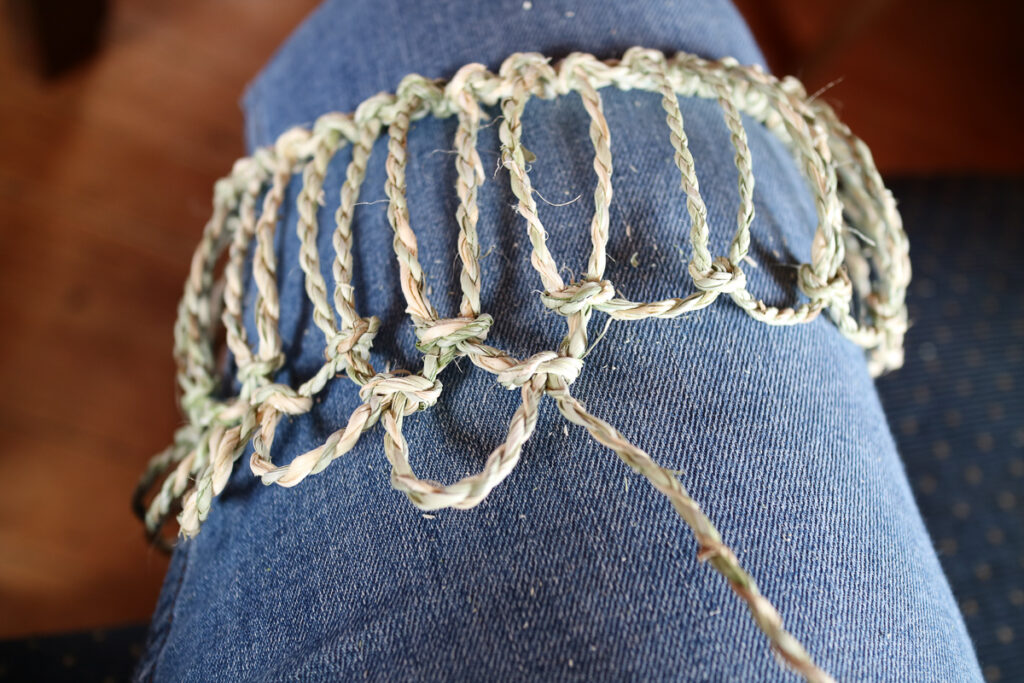 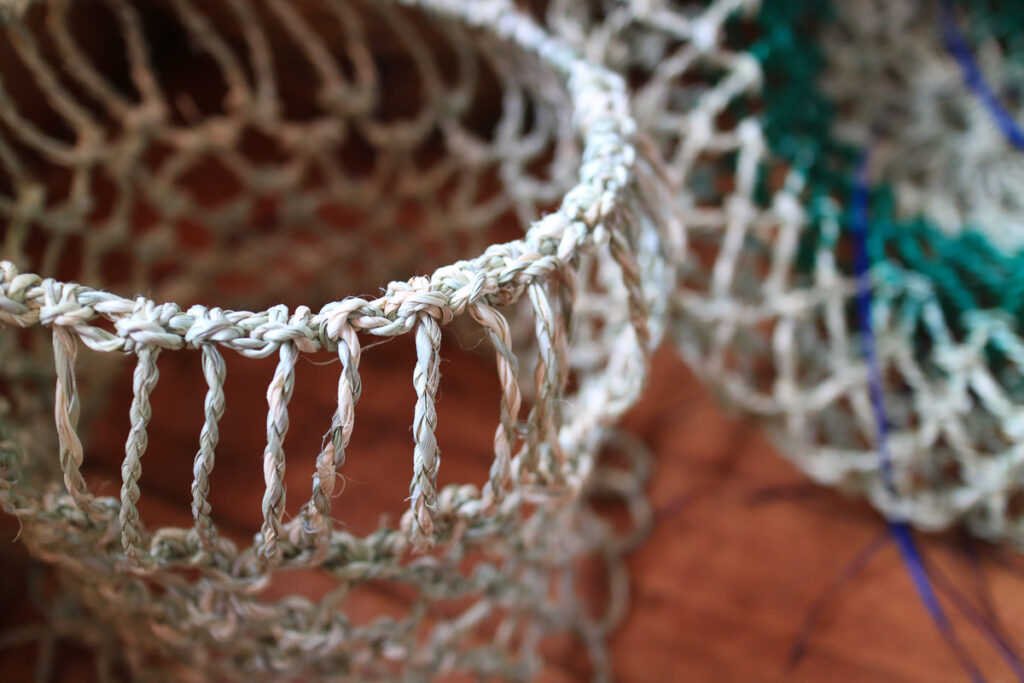 Nowadays, the production of pilwas has spread through Puerto Saavedra and the surrounding areas. It has become a small stable economy for many Lafkenche of Lake Budi.  Its commercialisation has increased into new marketplace scenarios, including foreign audiences. In this sense, the manipulation of pilwa’s narrative for commercial purposes is a threat. Although this is not a ritual object, it does have an identity rooted in a territory, a community, a way of living. Therefore, this artisanal knowledge should be acknowledged, validated and preserved in its holistic socio-cultural and historical context.

Pilwas can be bought directly from the artisans through the following Facebook accounts: 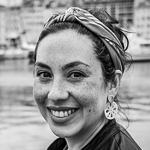 I am Chilean academic and designer, with a passion for craft as an embodied practice. Currently, I am based in Scotland while completing my PhD at Edinburgh College of Art, researching about the contemporaneity of artisanal expressions through its relationship with design, aiming to contribute towards an ethical and respectful collaborative relationship. In Chile, I am part of the Department of Design at the Faculty of Architecture and Urbanism, Universidad de Chile.

Crafting a community – A year of time, 2017-2018
[Re:]Entanglements in Nigeria
Following nature’s rhythm: a season on the field as a Linen Steward
Fragile threads: Baskets reborn in north Queensland
Eunbum Lee – 법고창신, the spirit of creating the new, based on the old
A revolution from the kitchen at Rumah Intaran
Bamboo Exposed: the art of Hafu Matsumoto
Australia Phoenix: A Cosmology