Two-Ways Learning – The gift that keeps on giving 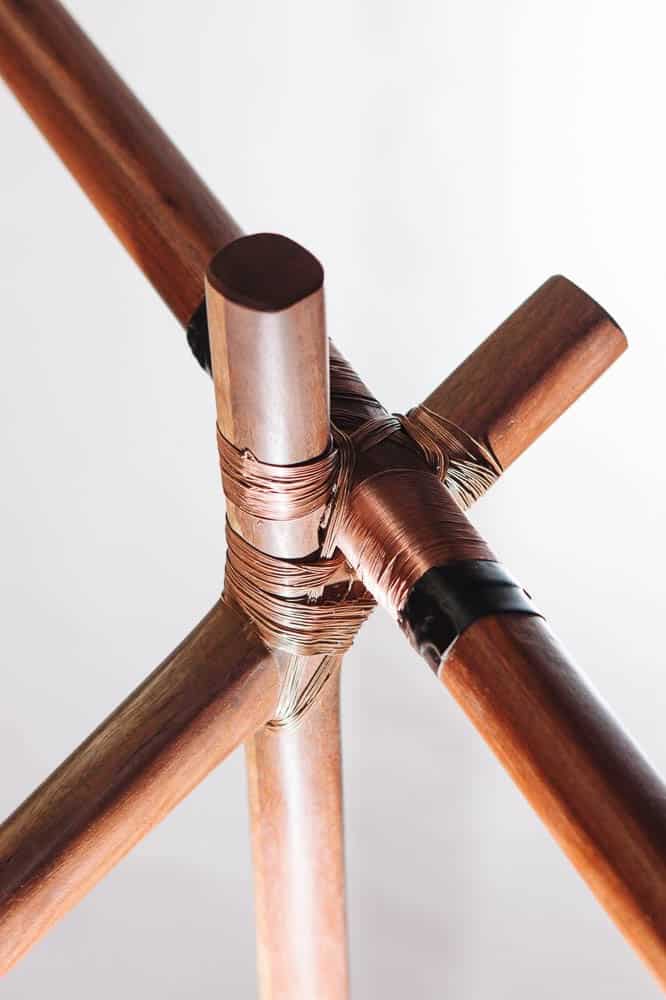 Exhibited at Castlemaine Art Museum’s 2017 exhibition, The Extractive Frontier: Mining For Art, co-curated by Beverley Knight and Clare Wright, Bala ga Lili (Two-ways Learning) (2016) is a cross-cultural collaboration between Melbourne furniture designer, Damien Wright and Yolngu man, Bonhula Yunupingu, who is a member of the Gumatj clan of Gunyangara in north east Arnhem Land. I spoke to both men about their work and soon learned that two-ways learning is the gift that keeps on giving and that this story has no full-stop.

Before their story begins, I would like to acknowledge the Gadigal people of the Eora nation, whose traditional lands I live on and offer my respect to the Elders past and present.

Damien and Bonhula met seven years ago when Damien was asked by Gumatj leader, Galarrwuy Yunupingu to help his clan with their furniture studio. Galarrwuy had read an article about Damien’s dogged insistence that 10,000 year old Red Gum be used to construct a table he’d been commissioned to design for the County Koori Court in Victoria. His intent with the use of the Red Gum was to acknowledge the presence of a history and culture pre-dating common law. The integration of this significator of the overlapping of place, time and culture in a table around which the judiciary, tribal elders, Indigenous offenders, their families and communities would gather for trials, convinced Galarrwuy that Damien might be the right man to help his people get their workshop up and running.

Gunyangara is located near the mining town of Nhulunbuy on the Northern Territory’s Gove Peninsula. The land the mine now occupies was a place for huts built and used by the Yolngu people when they were gathering food on the coast. It was common ground where a gurrtha (fire) visible to passing fishermen meant that they would be welcomed if they found themselves in the unpredictable waters of the Arafura Sea after dark. It was also a stomping ground and place for Bungal—gatherings where the infinite simultaneity of past, present and future are celebrated and sustained via dance and song. The arrival of balanda mob (white people) saw billowing smokestacks cast their shadows across the land and the warm, guiding light of the gurrtha was eclipsed by 24-hour flood-lighting. The hunting ground once favoured by the Yolngu is also rich in bauxite, which has been mined and refined for export on the site since the mid-60s.

Concerned that the gadayka (Darwin stringybark trees) were being uprooted and burnt as waste-products by the miners, Galarrwuy made the 5,000km journey to Melbourne to invite Damien to Nhulunbuy to make a table with the Gumatj men. Damien agreed and over two weeks of ceremonial smoke and song, Bonhula Yunupingu, Djalung Yunupingu, Brian Gurruwiwi, Tony Munungurr, Russell Gurruwiwi and he had made their table. Galarrwuy was happy with their work and asked him to come back to run the workshop. Damien accepted the offer and soon after, he and his family packed their bags and moved to Gunyangara.

Although Damien acknowledges that there was some understandable scepticism about a Balanda “blow-in”, both men talk about how they hit it off while working side-by-side in the Dharpa Djama (woodworking) studio. Making and doing is integral to the Indigenous teaching model and with the simple act of rolling up their sleeves and getting on with it, the seed of their collaboration, Bala ga Lili (Two-ways Learning) (2016) was sown.

Damien describes the light and intuitive touch required when blending studio methodologies with those of the community. “The nuances of their cultural and loyalty systems are unseen to us,” he says. While there were commonalities in the hierarchical nature of the workshop and those of the Gumatj community, the balanda approach to teaching was problematic. Bonhula and Galarrwuy called a meeting and suggested that Damien adopt the reciprocal learning method, Bala ga Lili. Bala ga Lili disrupts and levels the power relations intrinsic to the Western teacher-student model. “It’s better if we help each other… it makes the job easier,” says Bonhula. 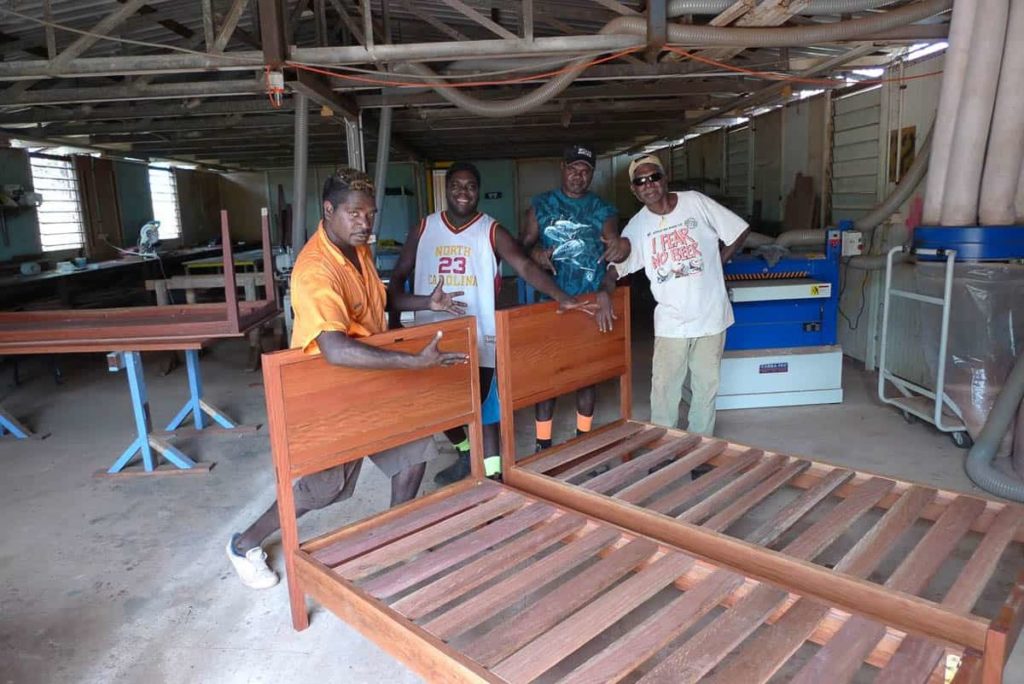 Damien observed that although the men were incredibly dexterous and had strong design principles, there was a gulf between the visual logic of the two cultures. He realised that his challenge would be to integrate their woodwork techniques and aesthetic into furniture being designed and made for both Indigenous and non-Indigenous audiences. In addition to honing finishing skills, this involved sharing what the Western eye takes for granted, Vitruvius’ mathematical theory of proportions. Damien points out that what we know as symmetry is an aesthetic hegemony handed down to Western designers from the time of Caesar. “We inherited this visual logic, the Romans brought squares to the UK. Those guys (Yolngu) don’t have that.” Bonhula explains that “it’s all about balance,” which could also be said of Damien’s quest for mutually relatable systems.

It’s a quest that led to his employment of the value canon to contextualise the furniture. Both use and hierarchical value had parallels in the community structure. Where the piece of furniture would go, its function and who would own it, were all transferable concepts. One of his lessons in kind was relinquishing the project management model, turning this methodology on its head and embracing Bala ga Lili. This facilitated a more collaborative, inclusive design and making process. 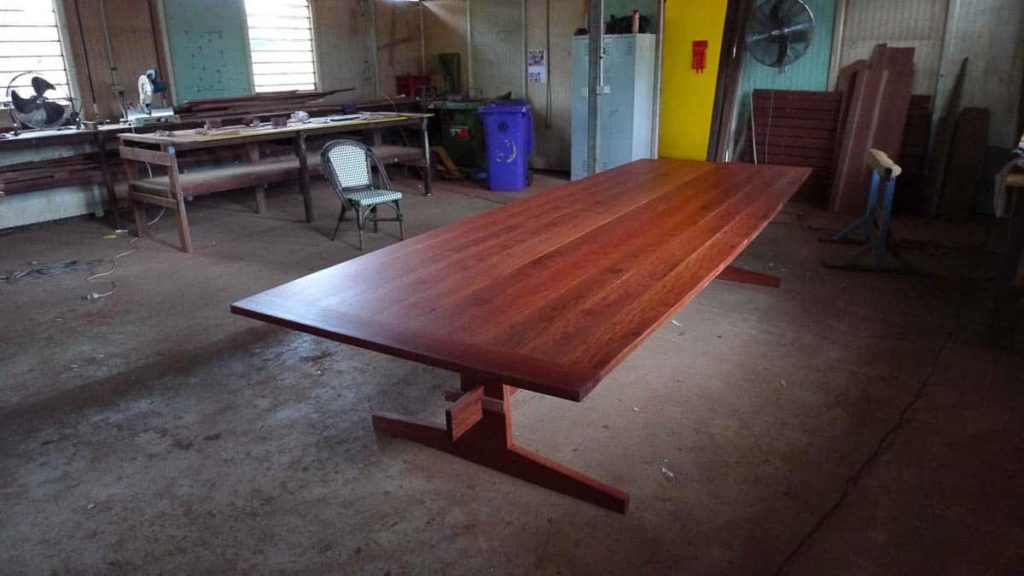 When Damien and his family returned to Melbourne, he and Bonhula kept in touch. “Mobile phones are a revolution for Indigenous and non-Indigenous relationships. Not long ago, once we had left there would be no way I could maintain a relationship without regular visits, for better or worse, with phones the frontier is permeable.” Bonhula also visits Melbourne and works with Damien in his Northcote workshop. It’s immediately apparent that the friendship runs deep, Bonhula describes Damien as “a good fella to be around” and Damien says of Bonhula, “he’s a generous teacher and has a terrific sense of humour” There is a deep and abiding strength inherent in these simply-put expressions of mutual respect. 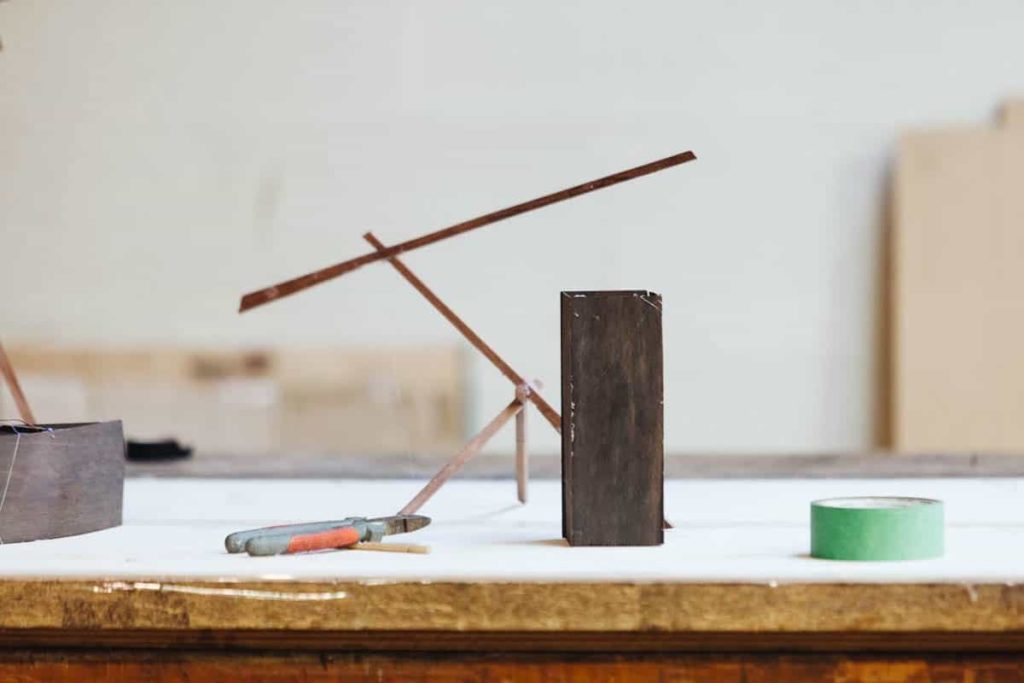 Although Western logic and the gallery context of Bala ga Lili dictate that the objects be read as a binary narrative replete with metaphor and symbolism, it may also be read as an anti-narrative, a conversation where what was left unsaid says just as much as what was resolved. Let’s consider both… 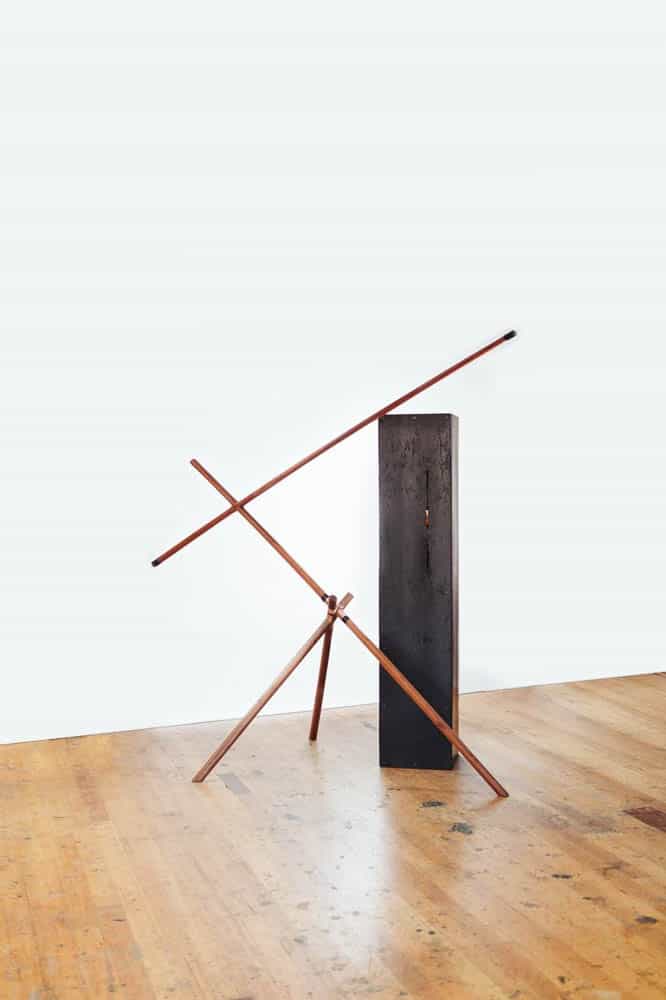 Wunhakali is a freestanding form, its geometry implying the strength and power of a spear wielding hunter and its construction referencing the binding techniques used by the Yolngu to make weapons. Bonhula explains that the throwing man represents the activities that occurred on the land the mine now occupies. “Catching fish with spears and hunting kangaroo. That’s the skill that we use… this man is all the men and all the old people who have gone before and will come after.” 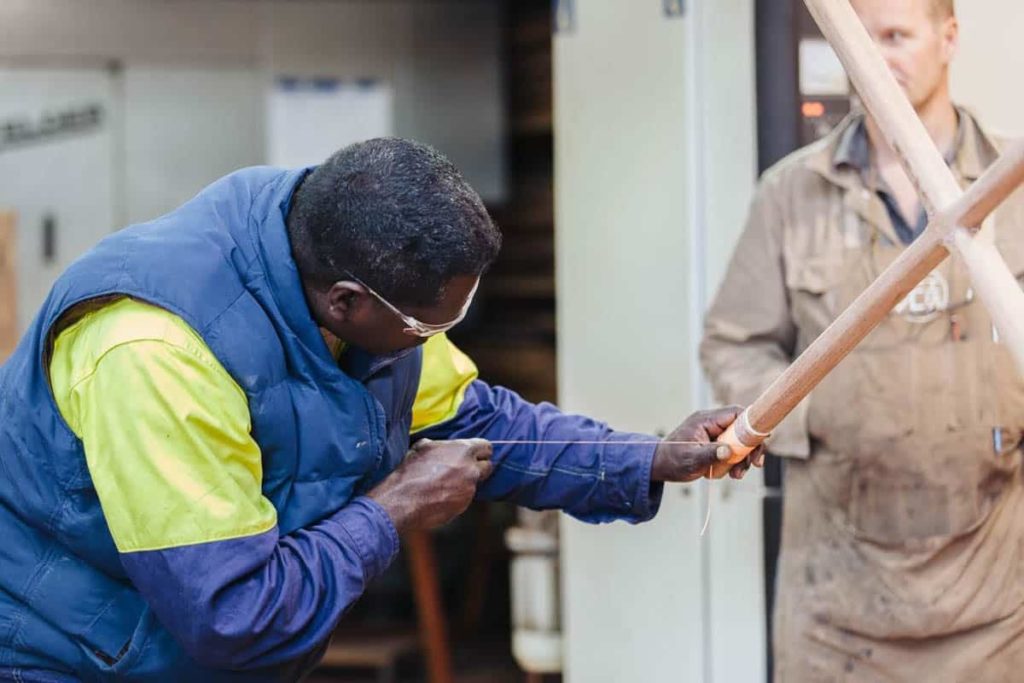 Wunhakali is juxtaposed with Black Light House (below), a pitch black, rectilinear form constructed with red gum, the same 10,000 year old timber used by Damien in the Koori County Court table to signify the presence of an enduring culture on and of this land. If you come close enough, a flame may be glimpsed flickering in its interior (below). Black Light House’s simplicity belies its connotations of complex relationships to land, possession and aboriginality. Although it’s black and the gurrtha is central, its form and power are directly descended from the Roman civilisation. It begs questions about hierarchical power structures and the friction resulting from the repurposing of place by those who colonise. 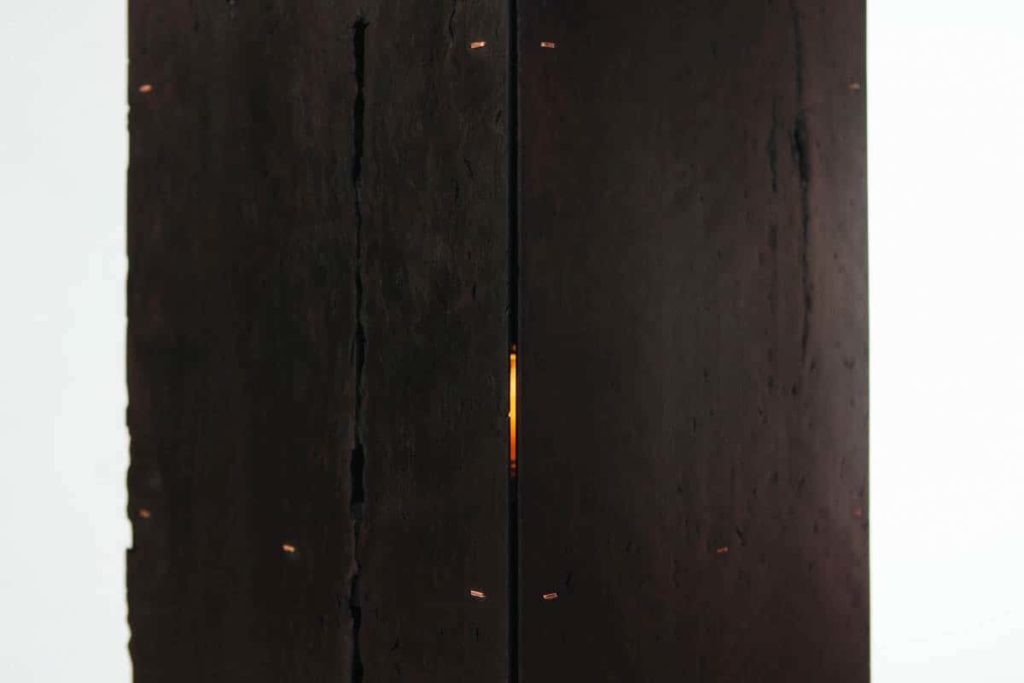 Although this reading of the work makes perfect sense to the academically trained eye, as my journey with Bala ga Lili progressed, I discovered that two-ways learning is all-consuming. Having had phone calls with both Damien and Bonhula, I realised that my literal analysis can oversimplify complex issues. In a culture saturated with images that draw on a range of Western codes assimilated since birth, it’s easy to forget to question the way we find or apply meaning. We seldom take a step back and reconsider what it is we are actually seeing. For Damien, Bala ga Lili speaks more of unfinished sentences than neatly packaged storylines. What came clear for him was that the real power and meaning was the act of collaboration. 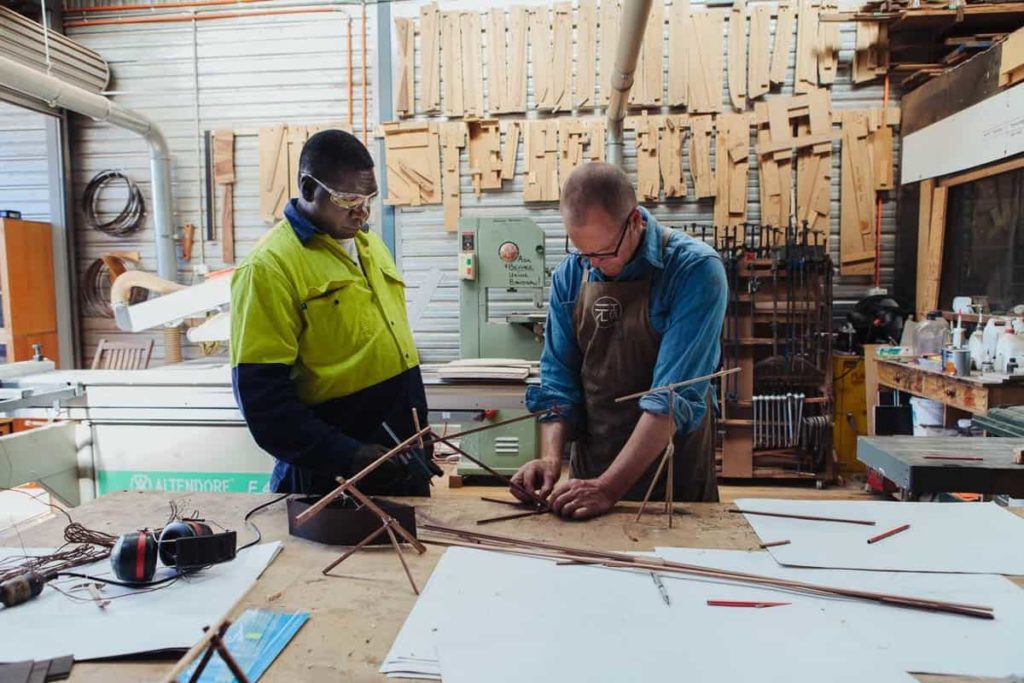 “I was left with a feeling that the honesty in the piece is the tension. These two objects are loaded with versions of power that can never quite reconcile. That’s not hopeless, it offers more hope in accepting difference,” he says. It is in this space in between that he defers to the Indigenous model of learning through doing and making. “It’s just about doing, acceptance that just doing it is what it’s about.”

Bonhula also spoke of the tension inherent in the process, “two ways learning makes the job easier but it wasn’t easy to be honest. It started with little things, Yolngu style of do’s and don’ts… the good thing about it is that we both made it and gave ideas to one another.”

These brave and frank admissions acknowledge the friction present in any collaboration, let alone one circumstantially laden with the weight of reconciliation. They remind me of the Zen quote “Before enlightenment, chop wood, carry water. After enlightenment, chop wood, carry water.” The point is not the outcome, but how we go about making our way towards and from it. As Bonhula says, “it’s a good idea for us to get this process going on… it’s better if we help each other and it goes both ways.”

Thanks to both Damien and Bonhula for the laughter, time and energy they brought to the writing of this story.

Gideon Haigh. (2009). The Pursuit Of Usable Beauty. The Monthly. 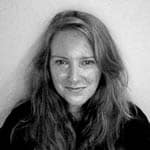 Michelle Montgomery recently completed a Bachelor of Art Theory at UNSW Art & Design. Combining image theory with her previous studies in art history and textile design, her passion is the history and theory of textiles and adornment. She is currently an Honours student at the University of Sydney and her research relates to the construction of identity and tribe via dress in a globalised world. See also her articles: Tuhirangi Writes on the Sky and Return to the source: Women’s work thrives in Utopia.

A rainbow serpent theory of time
Craft classic: The spurtle
Waterfall in a box
Weaving land and people: the Gwen Egg story
Vessels of love: Darug weaving that connects generations, community and country
Zhuizi: An ordinary dog's tale
Australia or Bandaiyan?
Balnhdnhurr: a mark for others to follow