Assegai: A spear of light across the Indian Ocean 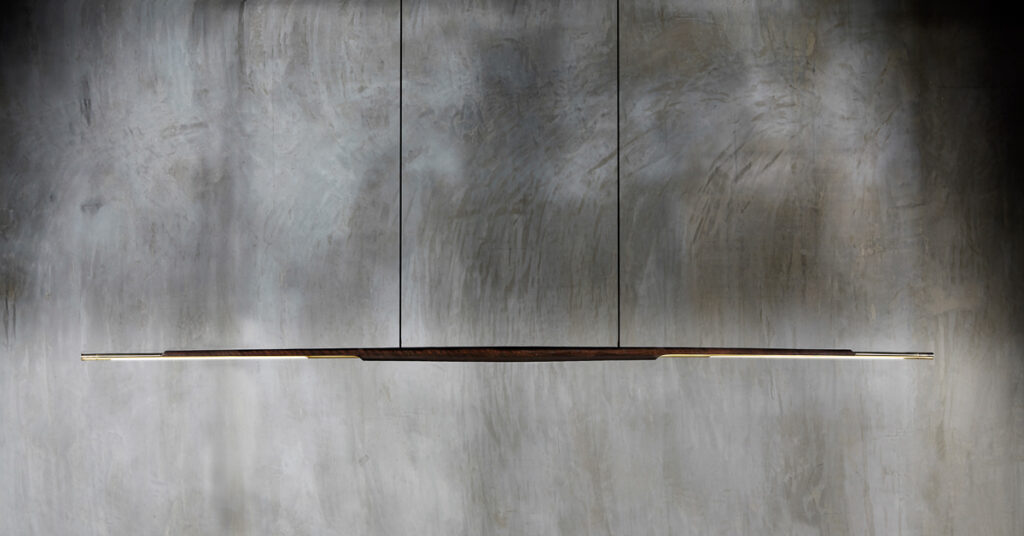 Adam Markowitz reflects on the origins of his pendant light and why he decided to give it a Zulu name.

How the idea of the lamp came about

The initial reasoning behind venturing into lighting design came from a frustration with running a craft practice and competing on the same playing field as mass-produced furniture. I had just developed the Flea Chair, a minimal Danish style dining chair. I was struggling to make those chairs quickly enough or cheap enough to meet the price that the market was willing to pay. I was facing this with a lot of my work: the more challenging, technical things I designed in order to make the work interesting and worthwhile to do, the more financially impractical my work became. There seemed to be less of a psychological glass ceiling in terms of perception of value when it came to lighting, especially for a sculptural centrepiece.

Formally I was looking at blending metal elements and timber elements, as LEDs do not like to be mounted directly to timber. I had been looking at midcentury Italian and French Luminaires, but also at muskets from the fifteenth and sixteenth centuries—if we put aside momentarily that these were intended for putting holes in people—the sculptural work of the timber, which interacts with the body and has an organic curvature to it, in combination with the “business end” which was so clinical and mechanical had this intense contrast that I was looking to explore in my own design.

A technical challenge in its making

The light is made partially through a series of jigs with a router, and partially by hand. The main challenge is achieving the central hollow to allow for the brass tube. In order to do this, the timber is ripped in half, and a half round is routed through the centre of each side. The depth of this has to be extremely precise: too shallow and the tube won’t fit, too loose and the timber won’t grip the tube and the tube will sag. Fractions of a millimetre and a slight change in finger pressure are all it takes to throw it off.

The two sides are then carefully planed and glued back together, attempting to achieve a perfect grain match so you cannot see the glue line. The final hand shaping leaves the wall holding the tube around 4mm thick, which is very delicate and requires a lot of care and attention when shaping.

While I regularly make the light from species such as Victorian Blackwood and American Walnut, the limited edition version available via Gallery Sally Dan Cuthbert is made from Ancient Redgum, carbon-dated to 10,000 years old, and dug up partially fossilised from underground sediment in the Murray River region. It is incredibly difficult to work and blunts every blade it touches very quickly, so achieving the hand-shaped form in this timber was extremely challenging.

How it became named assegai

I never really look forward to naming work. It always feels a little disingenuous. But when the name is good it can be so integrally wrapped up with the identity of the work. I usually go for something tongue in cheek, but I was struggling with naming this piece. While I had drawn from muskets and arquebus designs I didn’t really want to draw a direct link to guns. I was showing my work to my mother, who said that it looked like an assegai. The Assegai is the name of an African spear commonly used by Zulu and Xhosa warriors. It was often thrown. It seemed to capture the idea of this long, thin piece of wood slicing through the air. I liked the connection of the word back through my family and to South Africa, a place I still hold a link to though I wasn’t born there.

What does that mean for you as a second-generation migrant of African origin?

My father left South Africa in the ’70s after being imprisoned for his work protesting the apartheid regime. However, by the time I was a child in the early ’90s, Apartheid had fallen, and we would make regular trips back to visit family.  The words and culture of that experience have infused and filtered through my life, both directly and through parents and family. Apparently, I have a mild South African accent that only kicks in when I’m around my family.

I don’t really see myself as a “white South African migrant”, but consider my history as more Jewish in origin. My grandparents were born in South Africa, but their grandparents were born in Eastern Europe. The Jews have been wandering the planet for thousands of years while still retaining a sense of collective identity in their wanderings, and as a result of both of those things, have this sense of slow cultural accretion, assimilation and percolation. I can read (very) basic Hebrew, my language is peppered with Yiddish words and Eastern European cooking traditions (most of my family fled Eastern Europe in the early twentieth century: no one who remained survived).

I refer to my grandmother as “Gogo” (Zulu), to Snake Oil/homeopathy as “Muti” (Zulu), to stealing as “gap” (Afrikaans, guttural g, “chap”), and Biltong (dried African jerky) will regularly undo attempts at vegetarianism. Most people in the street would identify me as a fairly typical white Australian of generic European origin.

At one point I had considered giving the limited edition Ancient Redgum version of the light a name based on the word for “spear” from one of the indigenous language groups from the area where the tree had grown. But after discussions with Damien Wright, I came to the conclusion that my use there would be clumsy. Damien’s work Bala Ga Lili with Bonhula Yunupingu explores living cultural conversations with the original owners of the land, something which my knowledge and understanding of is poor at best.

I see the name of the light, made from Ancient Redgum from a tree that grew along an ice-age Murray River, designed with training from schools in Tasmania and Denmark, shaped with craft traditions learned in Australia and the US, and named with a Zulu word for spear as a signifier of my own cultural accretion in my wanderings, like a piece of flotsam floating down a river snagging and collecting things as it passes by. 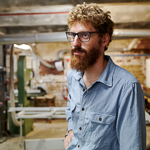 Adam Markowitz is an award-winning Designer/Maker of furniture & lighting, architect, and educator. He has trained in furniture design in Denmark and Tasmania as well as fine woodcraft at the Center for Furniture Craftsmanship in Maine USA. Since 2015, Adam has operated the independent design studio markowitzdesign, offering architectural services alongside bespoke fine furniture and lighting. Adam’s practice seeks to find a balance between contemporary design and traditional methods of craftsmanship. Based in Melbourne, Australia, his work searches for an authenticity and originality through the physical act of making, allowing hand and mind to work together to guide the emerging design concept. Adam has co-run the ExLab experimental furniture design studio for the last five years as part of the Master of Architecture program at the University of Melbourne and is the current Vice President of the Victorian Woodworkers Association. Follow @markowitzdesign