Life in a boma 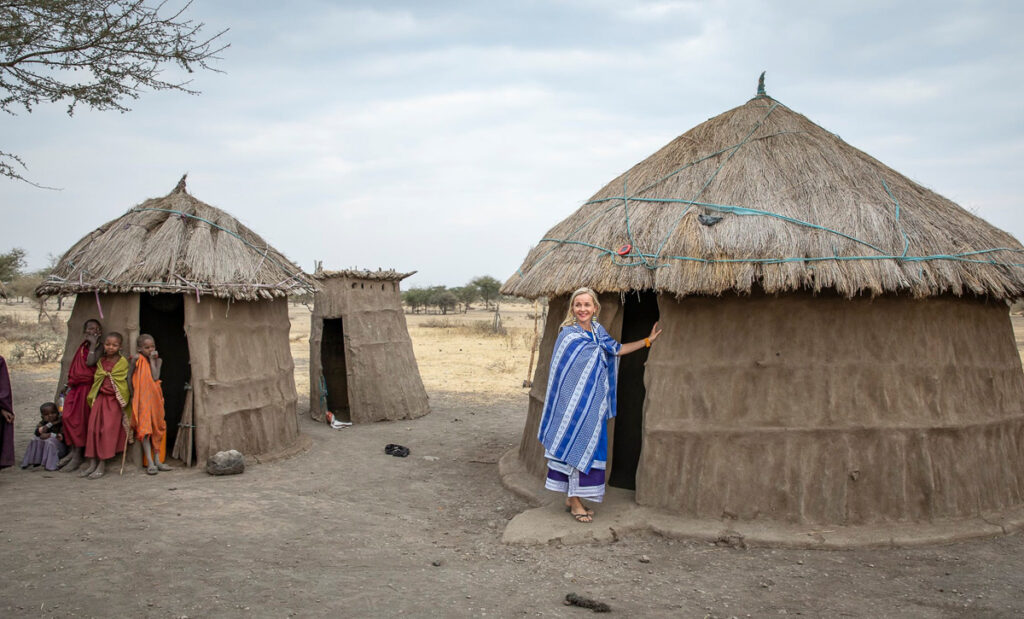 Anniina in front of her Maasai house (enkaji). Maasai house is made of mud, sticks, grass, cow dung, and urine. In Maasai culture, women build houses. 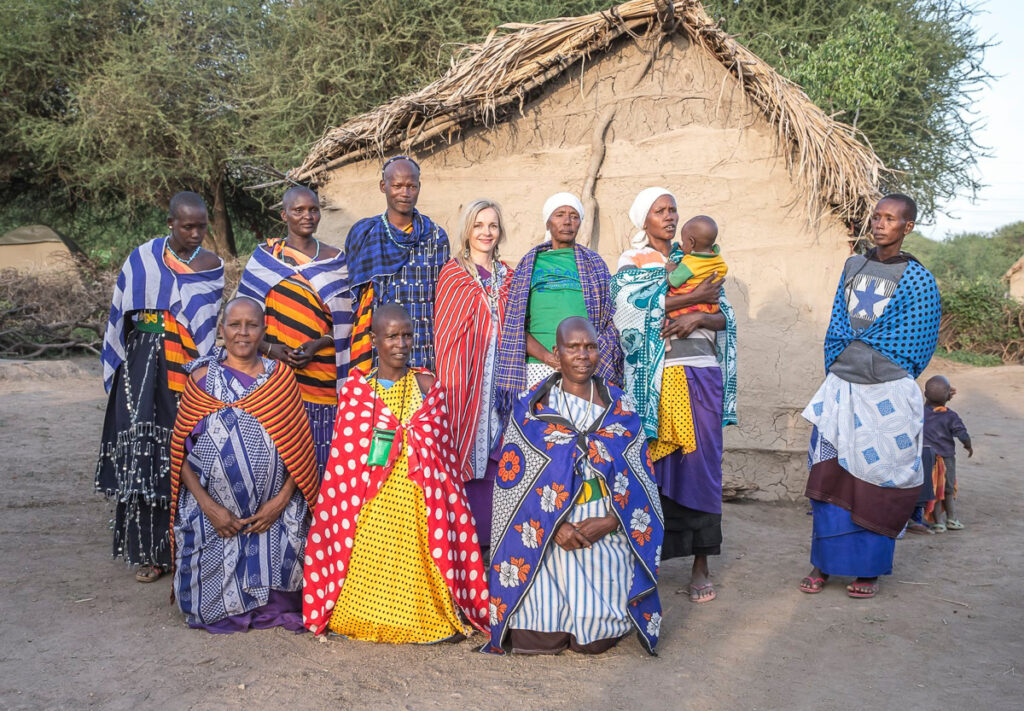 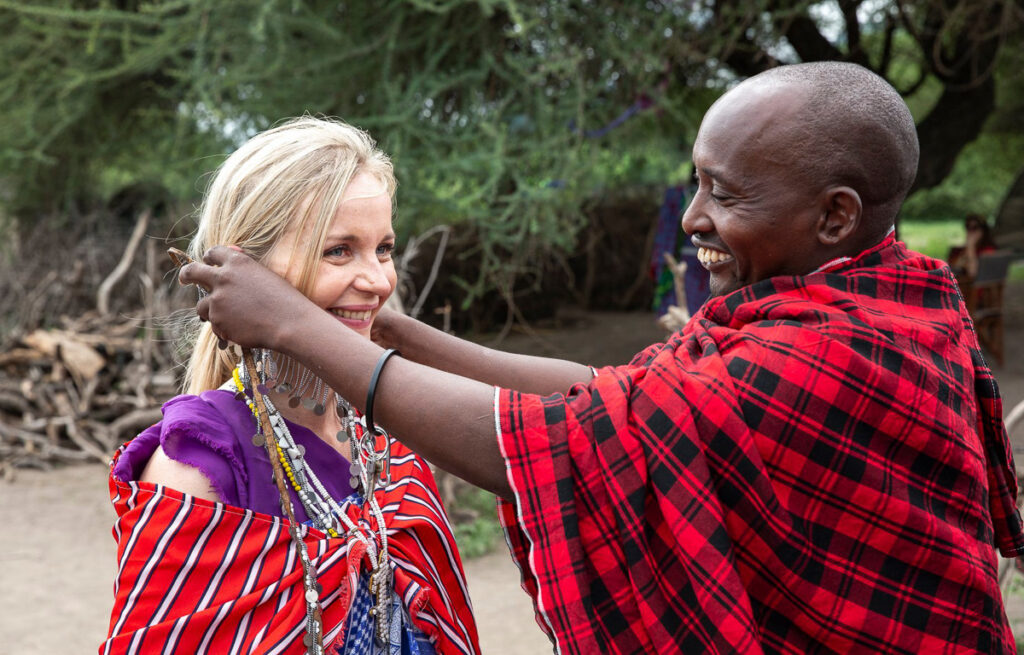 After many years without seeing each other, Anniina returned to her Maasai home. It was a great joy for everyone. Anniina was given new clothes and jewelry as gifts 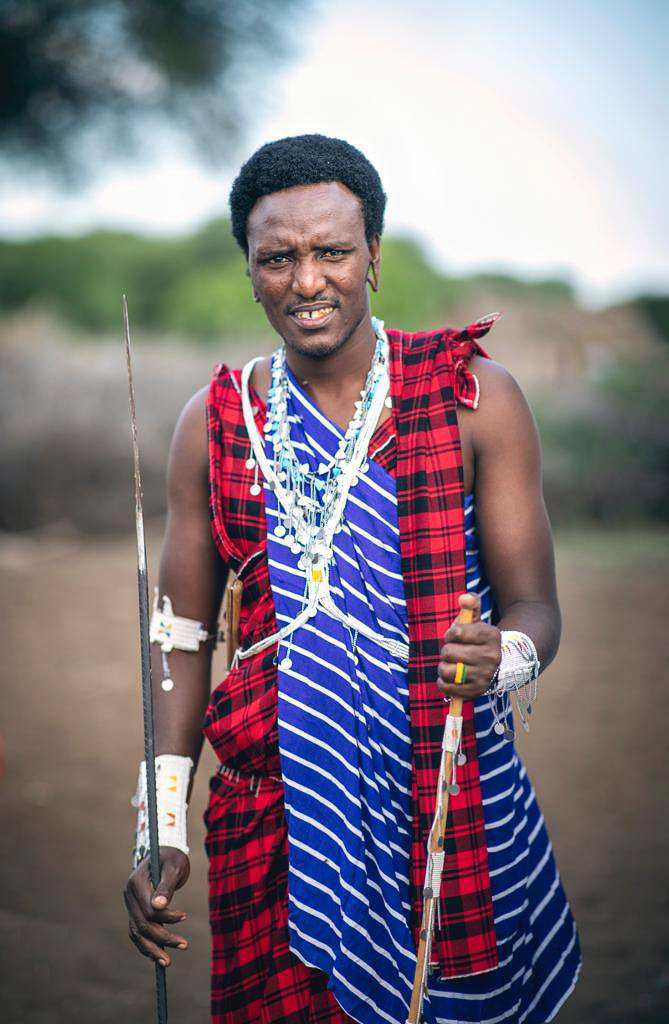 Olopiro / A Maasai from Ngorongoro Conservation Area who runs the tour of Visit Natives with Anniina and David in January 2021. Olopiro comes from the laiboni family which means a lineage of traditional healers and spiritual leaders in Maasai culture 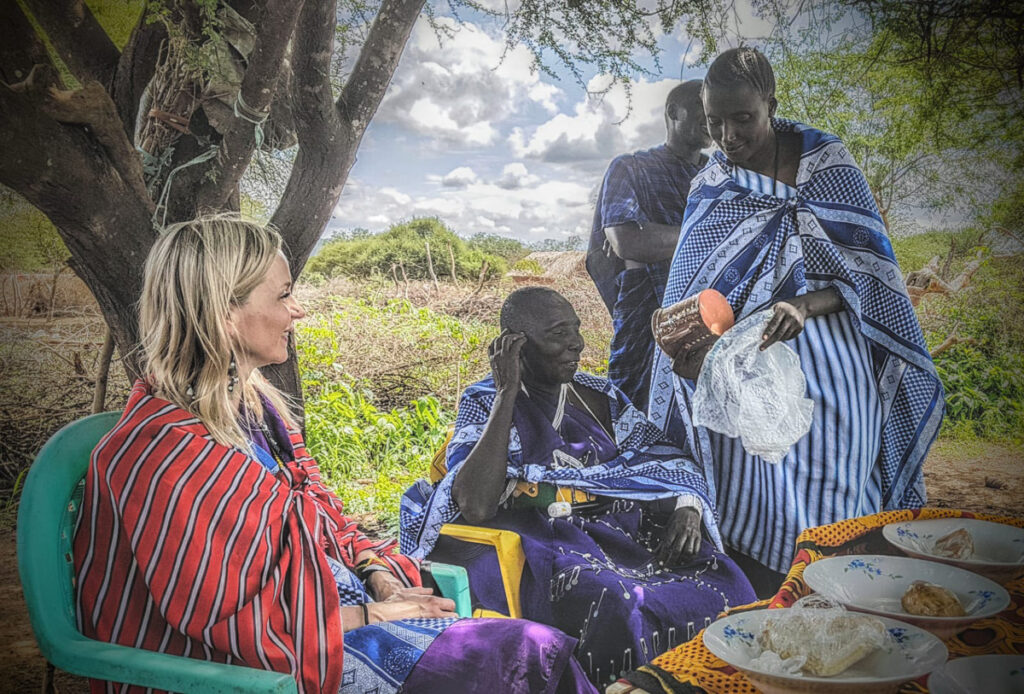 Anniina and Lea. It was the first time we brought travelers to Lea’s Obama. Lea got a gift from travelers. 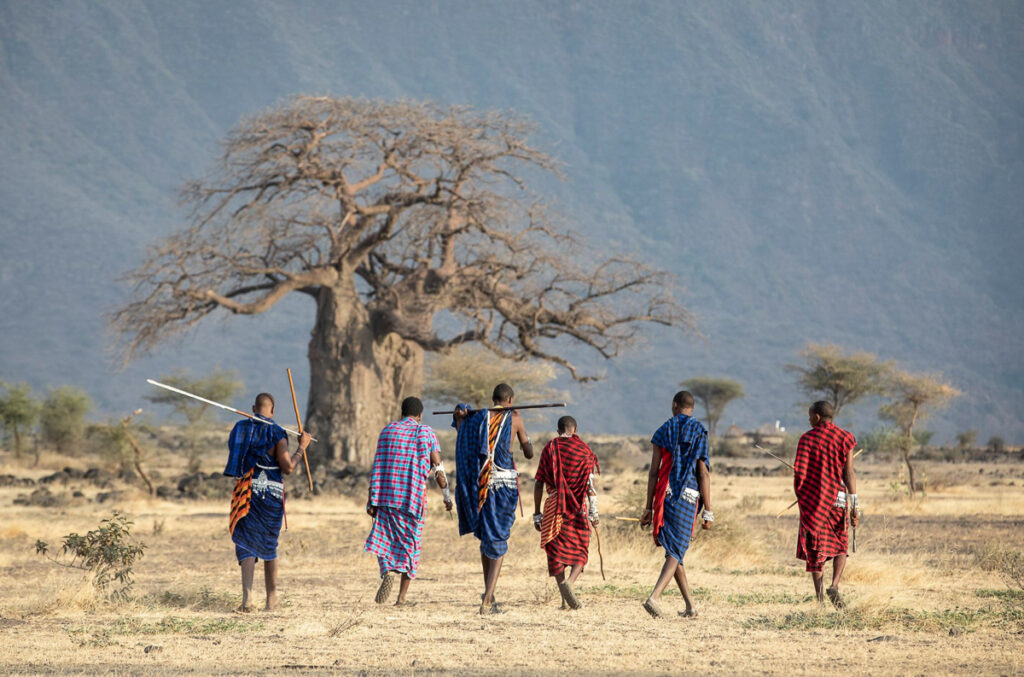 Anniina Sandberg shares her experience of living in a Tanzanian Maasai family compound with the goats and an occasional scorpion.

A fearless woman, who is prepared to leave the comforts of home, and move to a small village in Tanzania is a woman worth getting to know. Anniina Sandberg is a bold, adventurous solo woman traveller from Helsinki who completed her African studies at the University of Helsinki and then took her passion a little further. She not only travelled to Tanzania to meet the Maasai people in Africa but ended up living there for nine months.

Motivated to learn more about the Swahili language, the Maasai culture and their Maa language, this ambitious, inspired woman packed her study books away, left her friends and family and moved to Tanzania. Nine months later—mission accomplished. She was speaking Swahili fluently and also learnt to speak the Maa language.

“The experience of living with the Maasai changed my life,” Anniina explained. “It was a real turning point for me, and when I returned home, I missed my African life. I missed the remote savanna. I missed the communal feeling and wonderful sense of togetherness you experience by joining in the spirit of village daily life,” she continued, “I realised my happiness came from these experiences, living among the indigenous peoples. A life that is simple but so rich. I came home to Helsinki and felt somewhat empty. I made a plan to return”.

Some of the most memorable times for Anniina was joining in the many Maasai ceremonies. “It was the custom to dress up in Maasai clothes. We would all dance and sing for a whole day. Before every ceremony, and my Maasai friend Lea would invite me to her home and give me a new set of Maasai clothes,” she said with her gentle smile, “Lea was a woman who taught me many things about her culture and her values. She was a very strong Maasai woman and the leader of her boma (village clan settlement)”.

Life in a Boma

The Maasai people don’t live in villages. Instead, they live in family compounds called bomas. A boma is a homestead headed by one male, consisting of houses for each of his wives and their children. Maasai are polygamous, and every Maasai woman builds her hut in her husband’s boma. The final number of these huts depends on how big the family becomes.

Anniina continued her story, “I have to tell you about my Maasai mother, Lea Muna. She was such a great inspiration to me and a very caring person. Her life was hard; she was a widow with nine children. I lived at Lea’s boma, and every night I slept with Lea, her kids and her daughter-in-law, in a Maasai hut made of cow dung. Our bed was made of sticks and covered with cow skin. At night, all the small goats entered the tiny hut as well, so we were many inside! We slept in one bed, normally up to six people. When I returned to Europe, I felt so lonely in my student apartment”.

Anniina continued, “Our daily routines in Tanzania were pretty much the same every day. In the morning we milked the cows, and we drank tea. After that, the Maasai boys left for cattle herding duties, and the women and children stayed at the boma. Our work as women was to fetch water and firewood, and Lea also tried to cultivate vegetables. However, it was tough because the land was arid”, she continued, “We always had lunch at noon. We ate rice only and, in the evening, after milking the cows we would drink tea and eat ugali (maize porridge). It was very rare to get any vegetables, and there was never any fruit”.

Anniina explained how Maasai women work hard every day, but there was also a lot of fun. “Once we stopped a Bantu man who was riding a bicycle in the savanna. He was carrying a box of Coca-Cola to a remote village where he sold them”, Anniina continued, “We bargained and bought one Coca-Cola, and we shared it with four people. It was boiling-hot Coca-Cola, but we had so much fun drinking it and sharing that story”.

“I had to get used to hazards as well, and one time I almost stepped on a poisonous scorpion,” Anniina explained, “It happened at night. The Maasai couldn’t believe that I could not see that well at night. However, my eyes never got used to seeing in dark,” she continued, “There was no electricity in the village, and on this particular night, I came close to standing on a scorpion. Luckily, Lea was with me and instinctively pulled me away. She got really mad with me because I didn’t see it. She said I would not have walked for a week if I had stepped on it”.

With a far-away look in her eye, Anniina went on, “There were so many precious moments. However, I have one extraordinary story to tell you, which revealed to me where my heart belonged,” she continued, “Once, I got a high fever. It lasted for several days, and Lea got very worried. She arranged for some Maasai to take me to a local clinic by bicycle, where I was diagnosed with malaria and typhoid fever. The doctor asked if I wanted to have a lift to the nearest local town to recover, but I refused. My home was with the Maasai, and I wanted to return with my medicine, to the people that cared for me. Lea made sure I recovered well by offering me a pink drink made of milk and fresh cow’s blood. I got back on my feet soon enough”.

Anniina has worked for three years now, closely with the local community, in the area of health. When there are severe medical problems that cannot be healed traditionally, the locals often do not have the means to pay hospital bills, especially if specialist care is needed. Anniina helped to set up a programme to assist with health insurance so, for example, if a mother and her child needs medicine and transport, she can now travel to town for treatment and pay for the medication. “This often saves lives,” she said, “The programme, which has been going one year now has ensured a better and healthier life for over 100 Maasai tribespeople”.

Bridging the gap between indigenous and non-indigenous people can be a source of joy on both sides. Motivated to stay in touch with the Maasai, Anniina launched another venture when she returned home. She established www.visitnatives.com, a personalised tour programme to bring travellers to Tanzania and experience the culture in a very authentic way. In operation for three years now, Visit Natives customises trips and offers unique experiences for the conscious traveller. Each trip supports a new family with health insurance, having a very positive impact on their lives and their future.

“I want travellers to have meaningful and deep travel experiences that also benefits the locals. I believe this is the future of travelling. The families we have supported now with health insurance would not have had this without our travellers,” Anniina said. “I founded Visit Natives for this reason, and I accompany most trips”.

Anniina’s next trip in January 2021 will bring a new focus. She has teamed up with masterclass photographer, David Metcalf, a passionate philanthropist, accidental anthropologist and a brilliant photographer. Together, they are leading a small group to visit Northern Tanzania. The trip includes living in a boma (in a comfortably appointed tent), inside the Ngorongoro Conservation area around 4 hours’ drive from the town of Arusha.

There are plenty of opportunities to photograph wildlife and explore the natural environment. The group will stay in a Maasai boma and Anniina assures that each trip supports the local community. To make it fair, a new home-stay boma is chosen every time. This creates an equal opportunity in the village, and the excitement of sharing and hosting foreigners is shared among the locals. One very unique highlight of the January trip is a special visit to stay with the Hadzabe hunter-gatherers—they are one of the world’s last hunter-gatherers. The cross-cultural exchange is two-way, and hosts really enjoy learning from international guests, as well as the respect created, as guests who visit are directly contributing to the long-term health benefits of the family.

Travellers often comment that they get a deep connection with the local people because they are received as guests, not tourists. The indigenous hosts are often prompted to design handicrafts, which they, in turn, give, as welcome presents. “We only work with the local people who are interested in sustainable indigenous tourism and who are genuinely enthusiastic about the programme. I think this is the reason why travellers really value their experience, and often they tell us, it gives them a new perspective on their life,” Anniina concluded.

Hopefully, we will be able to move around the world again by 2021. If you’d like to experience Tanzania and a different kind of life and travel experience, there’s a program to accommodate visitors, which you might like to consider

Photos were by Katie Aun

Anniina Sandberg is the founder of the Visit Natives. She has an MA in African Studies from the University of Helsinki. Her expertise is intercultural communication, indigenous cultures and ethnography. She founded Visit Natives because she wanted to create her dream job where she can work with and help the indigenous peoples.

David Metcalf, photographer and filmmaker, is committed to indigenous cultural stories on canvas and film. David is reputed for being a “cultural storyteller” having captured some of the most stunning, provocative and mystical scenes in remote locations. Get photo tips direct from David, in the “spirit of learning” through education, embracing the wisdom of tradition and heart-opening inspiration of real human contact. David and Anniina welcome you to join this trip in January 2021. 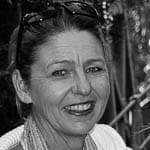 Stephanie Brookes is the author of a cultural travel book, Indonesia’s Hidden Heritage – Cultural Journeys of Discovery, which covers 12 stories, 12 islands and 12 different ethnic tribes. A specialist Bali based Indonesian travel writer for over ten years, Stephanie searches out some of the more remote destinations in Indonesia. Her tales from Indonesia and beyond can be viewed on www.travelwriter.ws. Her latest project involves supporting a cultural connection community initiative in Ubud, Bali called Ubud Village Plate, where travellers join a host family for dinner, in a Balinese home and cook together with the family.

Stepping out: Africa Fashion Week Middle East
The long and winding Silk Road: My quest to uncover treasures from Central Asia
Iziqhaza: Designs that open your ears
New Zulu beads to be worn with pride
Nyibol Deng ✿ A recycled life
In search of the elusive Baluchari in Bengal
Carried Away: A bag of the month
A new festival for Madagascar, the home of wild silk