Iziqhaza: Designs that open your ears 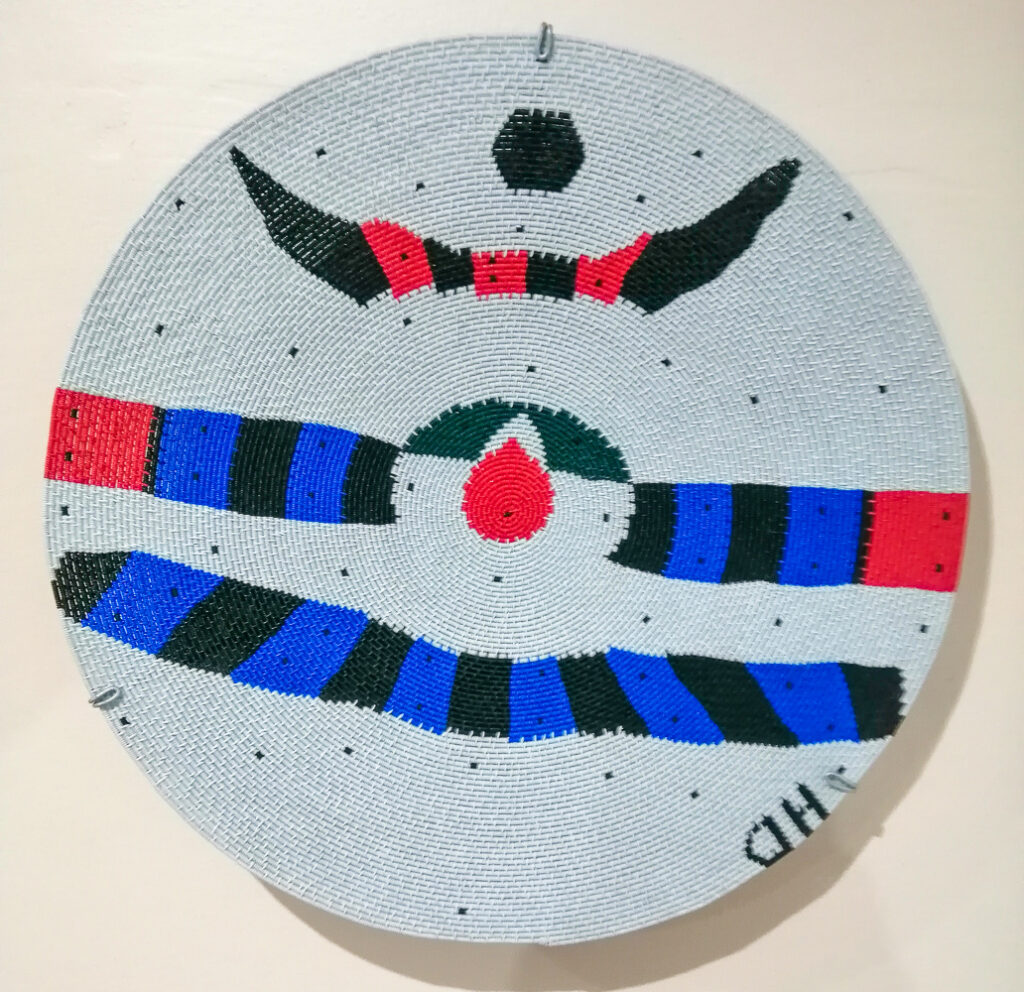 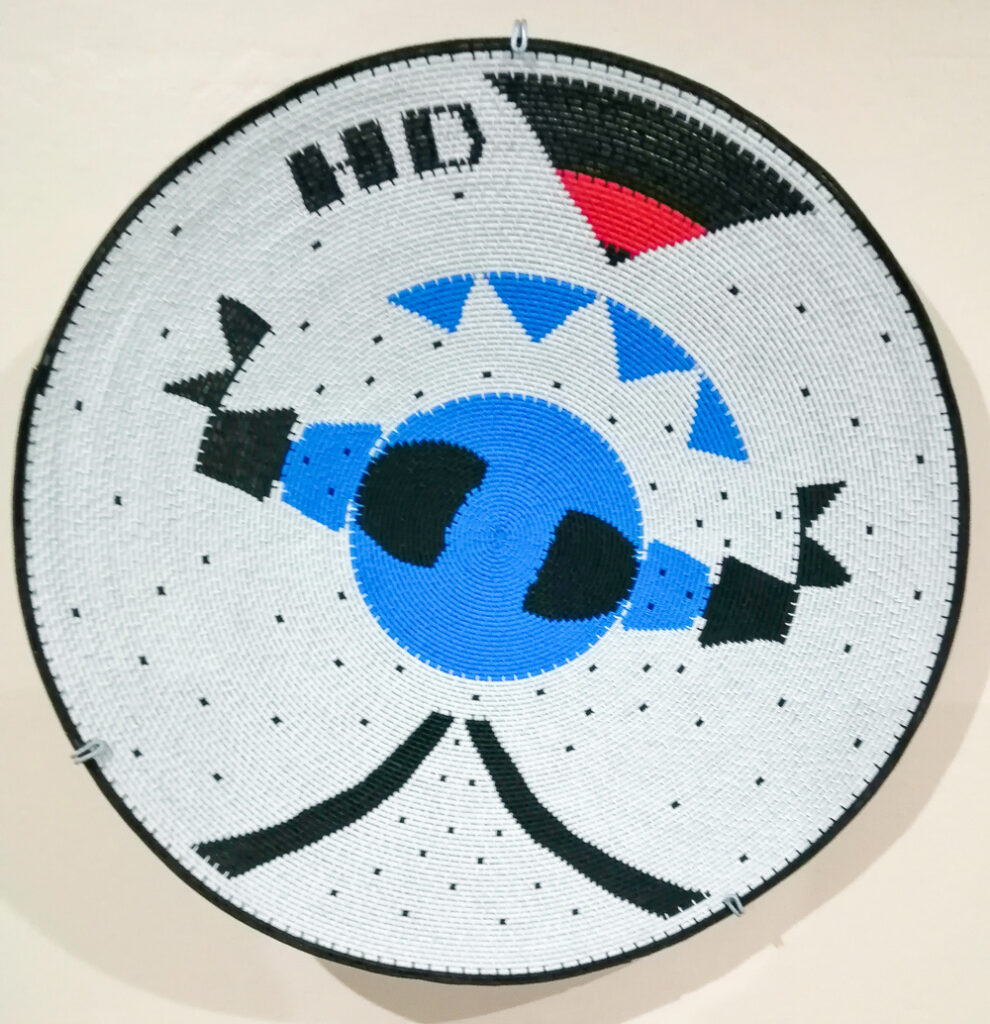 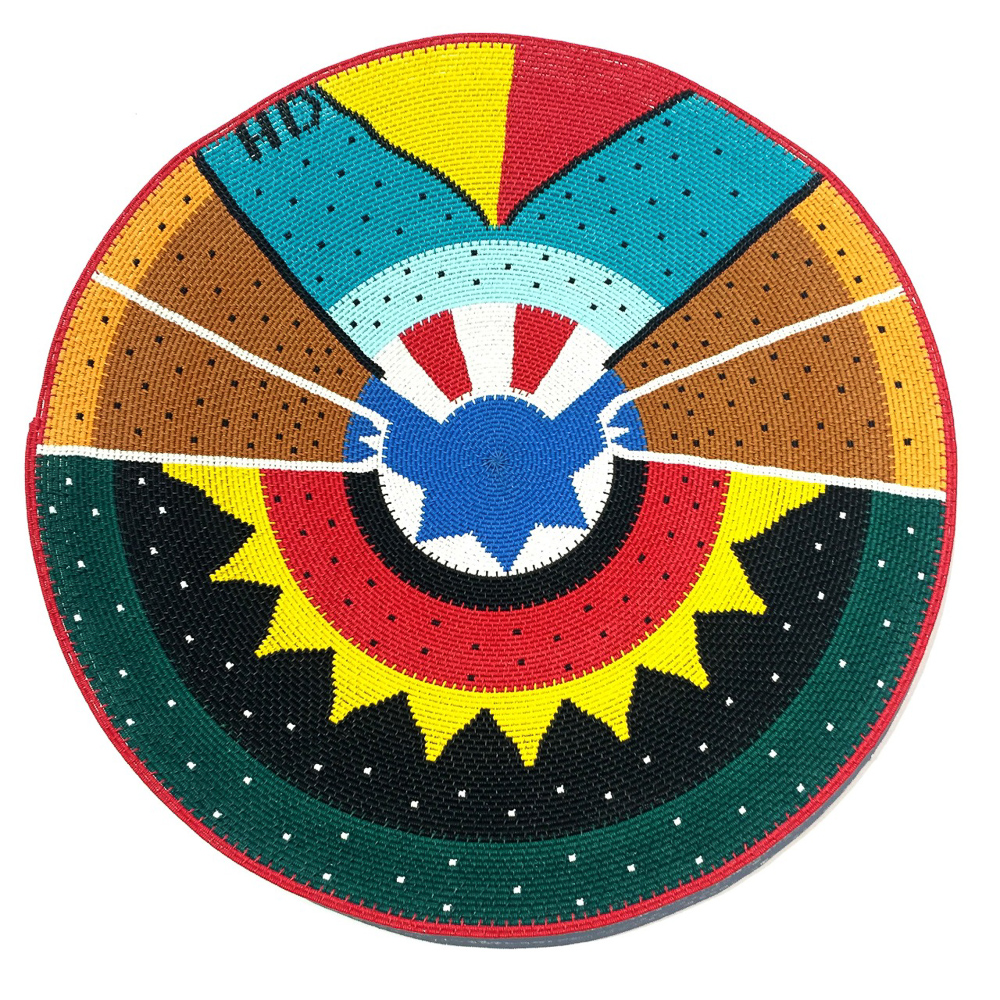 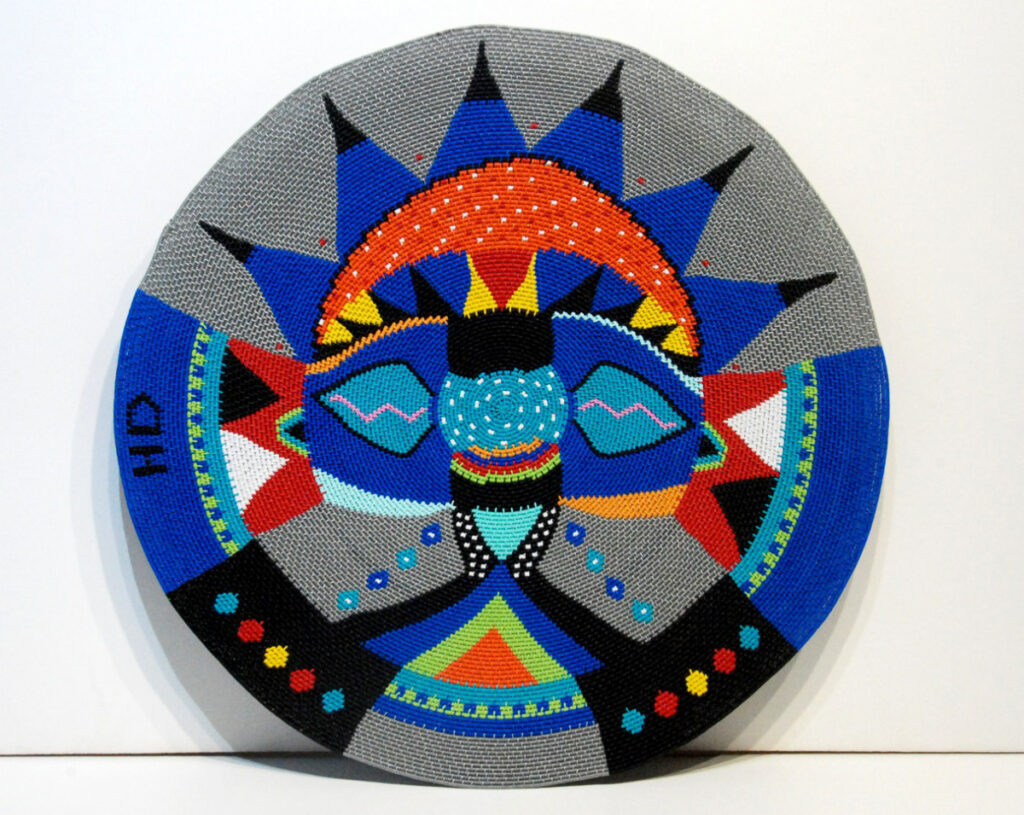 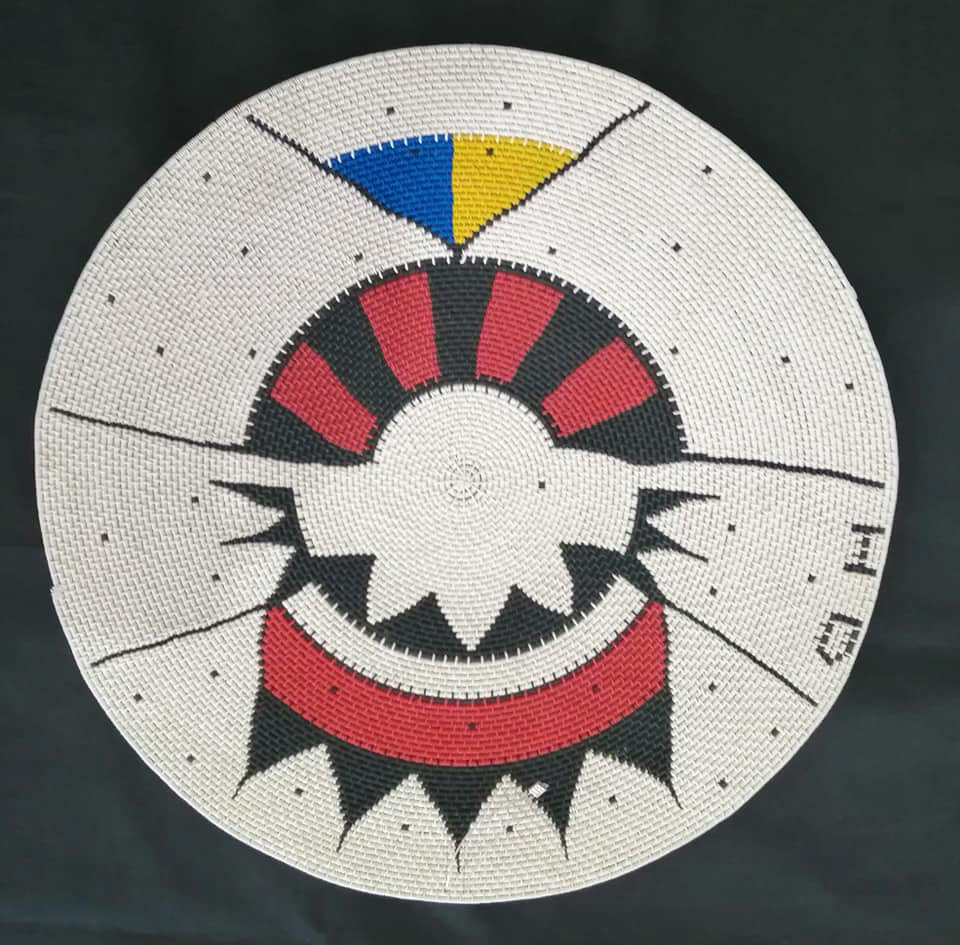 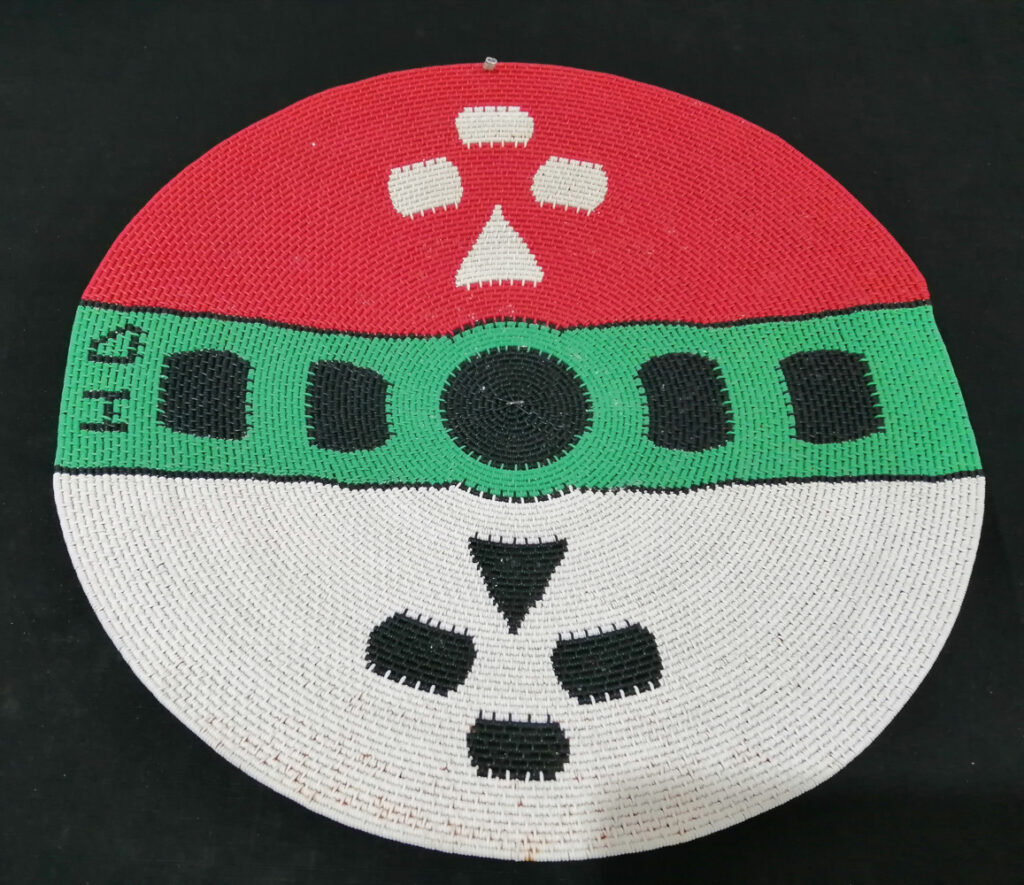 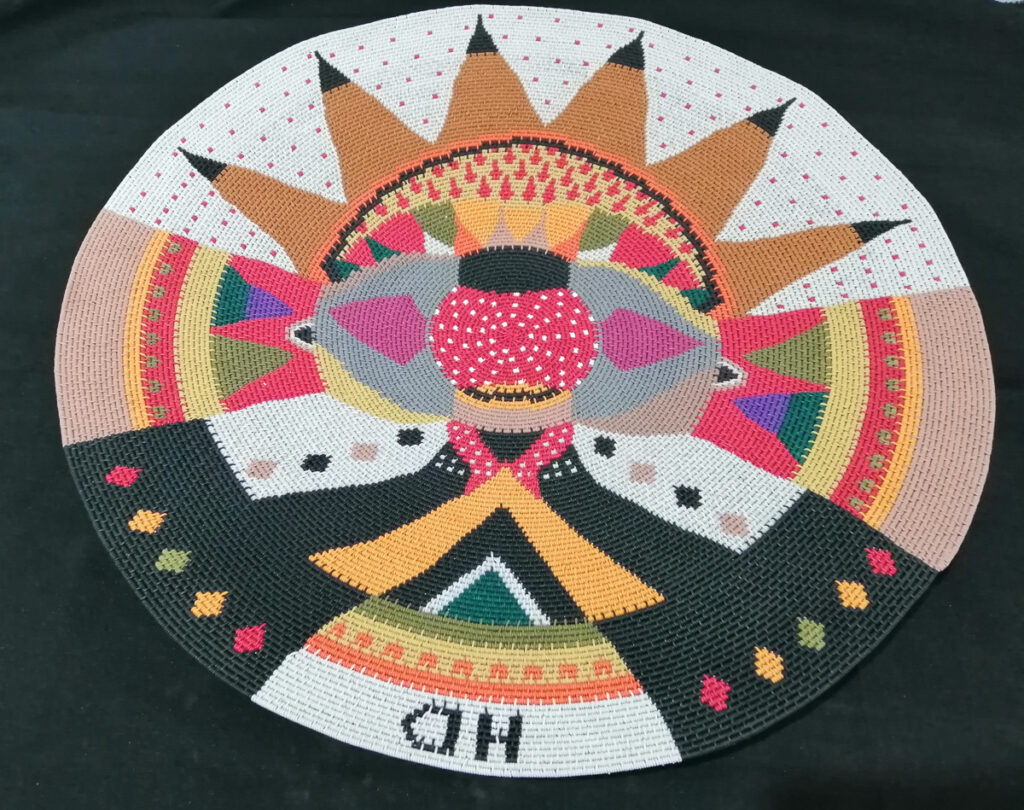 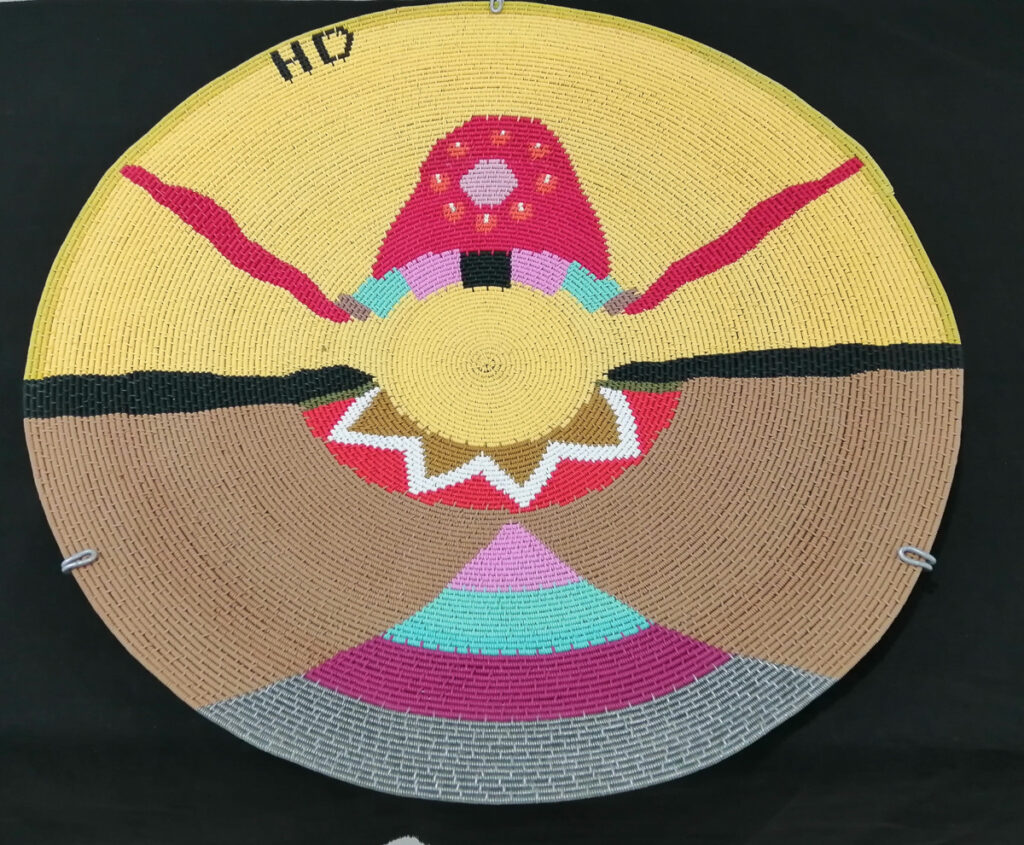 Hlengiwe Dube recounts the elaborate Zulu tradition of earplugs that inspired her baskets.

(A message to the reader in Zulu.)

Weaving baskets has been around in South African for many years, using ilala palm and different grasses that are indigenous to our the country. During the 1940s, people started weaving sticks using telephone wire threads. This form of craft/ art was more common amongst security guards, who wove over their sticks to keep them awake. Weaving over plastic or enamel bowls started later in 1960s.

When I was still in primary school, I used to make grass mats as craftwork. When I saw the telephone wire threads, I started to have an interest in using the same technique that I was using in making mats to create a small plate. Working at the African Art Centre at an early age, I had the opportunity to work with well-known crafters that were weaving baskets using both telephone wire string and Ilala palm. This included crafters like Elliot Mkhize, Beauty Ngxongo, Laurencia Dlamini and Reuben Ndwandwe.

Since people are now no longer wearing customary earplugs, I feel that I have to share the history surrounding the earplugs with the younger generation.

Why telephone wire earplugs? if you want to communicate with someone who is far from you, you use a telephone. You can hear the voice of the person from far through this small wire that you put close to your ear. You can fell the connection because you are hearing their voice. There is a strong connection between telephone and earplugs. In Zulu customs, there was a very common practice in the olden days which involved piercing a child’s ear so that it could hear. 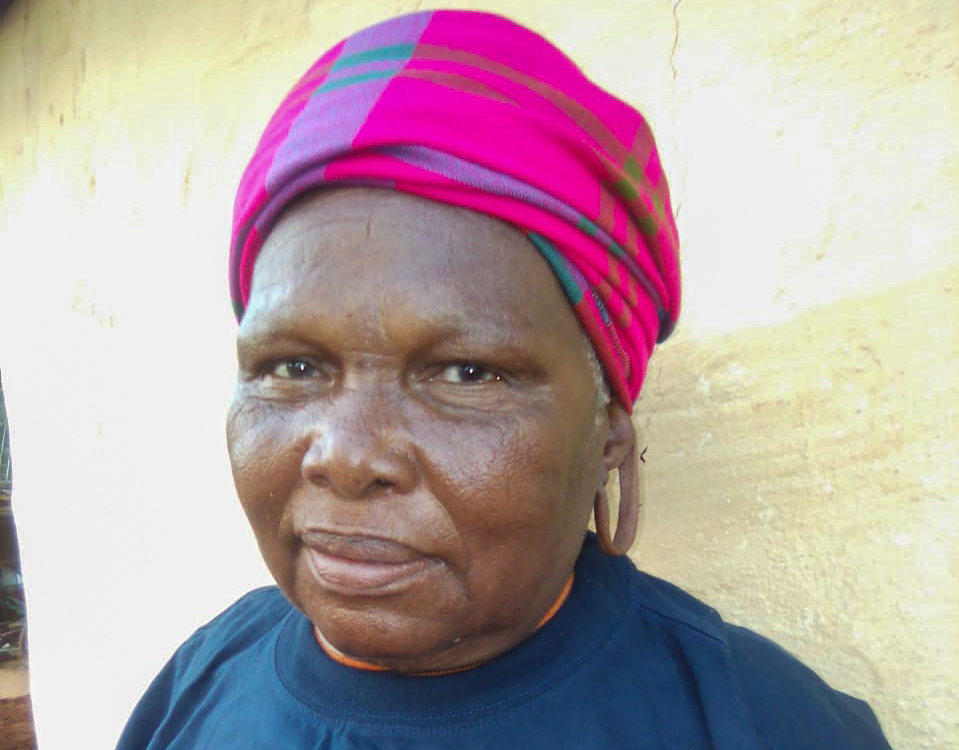 I was fortunate to be able to talk to Fokisile Ngema from the Msinga area, who started wearing earplugs when she was twelve years old and she still has her ear cuts. She explained to me how she was pierced. Piercing was the job of an older woman who had never married and was still a virgin. Fokisile went on a special trip to the woman’s house with the other girls in her age group (ontanga) when the moon was full. This woman did the ear piercing for free saying it was part of her contribution to the community and that she enjoyed her work.

Fokisile still has very long ear lobes and she said she would like to shorten them but not through the hospital. She prefers the old traditional way of dealing with this, in the same way that her sister did. When her sister also had long ear lobes, but was converting to Christianity, she asked Fokisile to shorten her lobes by cutting them with a knife and stitching them using the hair tail of a cow. Fokisile was well acquainted with this method of stitching used in the area. She used to stitch the members of the community when they had been injured on their heads during the stick fights after ceremonies or other special occasions. People came to her because they knew that she would do the job very well and she was not afraid of blood. Sometimes, when she did not feel up to doing it on a particular day, she hid from people and would tell her family that if anyone came they must say she had gone to visit her uncle.

The development from childhood to adulthood for both males and females was not one of imperceptible change, but rather a series of clearly defined steps, with each bringing increased status and greater responsibilities. The first of these was the ukuqhumbuza, or ear piercing ceremony, which applied equally to girls and boys and was then, in earlier times, followed by separate puberty ceremonies for girls and boys. With the advent of the Zulu empire, puberty ceremonies were largely superseded by conscription. Full adulthood was only achieved once permission to marry was granted by the king and, in the case of men, they were permitted to don the isicoco (a band of hair and grass woven onto the heads of married Zulu men). In terms of traditional law, females remained minors.

Ukuqhumbuza ceremony was conducted after the crops had been harvested and when there was a new moon (ukwethwasa kwenyanga) because this was the time to make a new person. Usually, the induna yesigodi (head of a district) would call the children, male and female, of the appropriate age and a collective ceremony was held. The ceremony was accompanied by feasting and each parent sent beer, maize and even goats or a beast as their contribution to the feast.

The operation was usually conducted by an experienced officiator and it was performed at the entrance to the isibaya. Sometimes, two or three people assisted the officiator. Women were excluded from the ceremony unless they were well past childbearing age. The instrument used for the ear piercing was a flat piece of iron about 12 millimetres wide, which had been sharpened at one end. Sometimes the blade of a small spear was used. A shaped piece of corn stalk was then inserted into each ear in order to stretch the size of the hole. After the children’s ears had been pierced, there was general feasting and dancing, which lasted as long as beer and food were available.

The ukuqhumbuza ceremony marked the first step along the road to adulthood and, by piercing the ears, it was believed that the child’s ears had now been opened and that he or she would be able to hear well and therefore be able to understand things better. With this came greater responsibilities and more onerous duties. The ukuqhumbuza ceremony was a gender-inclusive rite of passage and was universally applied throughout Zululand since a person whose ears were not pierced was said to remain foolish and childish and good-for-nothing (Usala uyisilima, unobungane futhi ungamsebanzi walutho). As a result, pierced ears become a distinguishing symbol of the Zulu nation. In order to emphasis this mark of distinction, it became common practice to insert an earplug into the opening so that it would show up from a distance. The iziqhaza to be worn depended on the size of the holes.

Puberty marked the next step toward adulthood and it was achieved through, and culminated in, an important ceremony called the ukukhomba, which applied equally to girls and boys. During this period boys had to eat special food, while water and the staple amasi were strictly taboo. The special food given to the boys was umthubi. During the ceremony, the amabutho (military system) was introduced stressing the need for ritual cleanliness and how to behave generally as adults. Also, and very importantly, boys were instructed on such issues as the importance of not breaking a girl’s virginity. This was achieved through ukuhlobonga, during which there was no penetration. The culmination of the ukukhomba was characterised by a festive “graduation” ceremony to which all members of the umuzi, as well as neighbouring imizi, were invited. After the ukukhomba was completed the graduate was now known as an insizwa and he was now able to continue on to the next rite of passage. This ukukhomba involved the conscription of his age set (ontanga) into one of the amabutho.

The girl’s puberty ceremony (udwa) was in many respects similar to the boy’s ukukhomba ceremony. It commenced after the first menstruation and, like all transition ceremonies, involved separate rites and a period of seclusion. This was then followed by incorporation into their next age group. After the udwa ceremony, the girls have reached a marriageable state, i.e. an age when she is allowed to be courted. The ukwemula process can actually be initiated by the girl herself, by her ceasing to eat amasi and thus indicating to her father that she wished it to be known publicly that she was ready for marriage. In response, and if he agreed, he would arrange for an umemolo coming of age ceremony. At the umemolo, a cow would be slaughtered. During the festivities that followed, the girl would wear clothes of a married woman such as an isidwaba-leather apron and beaded apron and the stomach lining (umhlwehlwe) of the slaughtered animal as a garland. This ceremony confirmed the father’s consent to his daughter being courted.

For a period of about a year, or even longer, after the umemolo ceremony, the girl and other members of her ntanga, for whom a similar ceremony had been held, came under the guidance, and indeed control, of the older girls (iqhikiza) of the area, who already had sweethearts. The role of the amaqhikiza was to advise the younger girls on how to behave and how to react during the courting process. The younger girls were not allowed to speak to a potential beau until they had been given permission by the amaqhikiza.

When the amaqhikiza were satisfied that there was consistent interest among those girls who had been singled out by admirers, they were called together and given permission to speak to the men. However, even at this stage, the girls were not allowed to choose a sweetheart from the crowd of wooers. After about another year the girls were called to a meeting (intandi) where they were informed that they could now select a suitor and surreptitiously convey their affection to him.

For my own basket collection, I researched earplugs in Phansi museum, Virginia Museum, Durban Art Gallery and Elizabeth Perry earrings. I have also created my own design looking at the beadwork and the earplugs that the Shembe members are wearing these days. 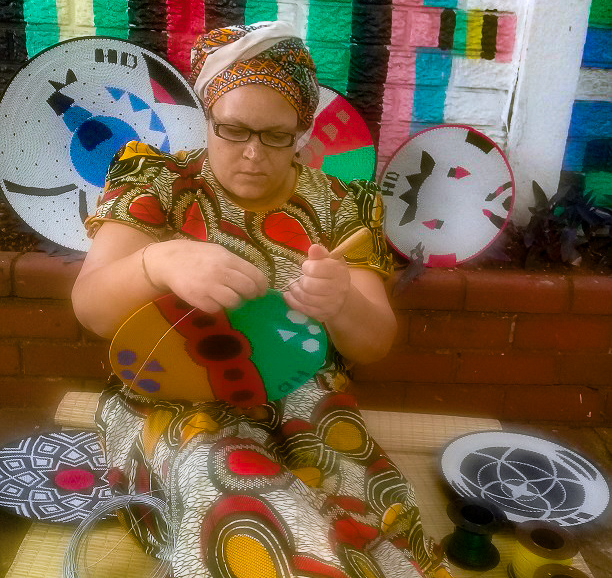 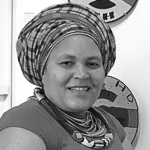 Hlengiwe Dube was born in New Hanover and moved to the Valley of thousand hills (KwaZulu Natal) at the age of nine. She is an artist who specialises on baskets weaving and beadwork. She learny the skills of craft at the age of 12 from her grandmother. She is a founder of Ifundiso Trading which is known on art and craft training and development. Hlengiwe is an author of the Zulu beadwork –talk with beads where she tells the history of beads and messages behind the beadwork. She has been involved in many development projects locally and internationally, passing her skills in beadwork and also in telephone wire weaving. Each time she passes her skill she always adds the traditional technique and designs so that it remains unique. Her work can be found at the KZNSA Gallery in Durban.

And They Lived Happily Ever After: Object narratives from a land far away
Kultur-All Makaan: A cool place for African warmth
Carlier Makigawa ✿ Delirious in Uzbekistan
Life in a boma
The story behind Wellington's Handshake
The Afro-Peruvian cajón: Reclaiming a humble percussion crate as one’s own
The Handshake journey: I am the water and the water is me
The Eastern Cape made visible through jewellery