In a world awash with lace from the catwalk to the high street, worn by royalty and rock stars, New Zealand artist Rowan Panther’s striking muka jewellery pieces stand out for their innovative use of a rarely-seen craft with a natural fibre unique to Aotearoa New Zealand.

When I am in Auckland, I always make time to visit the Fingers gallery, both on a professional level, as a curator, to see what’s going on in the world of New Zealand jewellery, and also for personal pleasure. When I first came across Panther’s work there, I was immediately drawn to it. Having worked for most of my career with Māori textiles in museum collections, I felt sure that it was made from muka but had never seen it used in that way before.

The piece that drew my attention seemed to float off the wall, with delicate wisps of muka curling down from the sharply patterned lace. I felt the resonance of moana connections and identities—the form and shape reminded me of treasured neckpieces I had seen from throughout the Pacific Islands—the muka of kairāranga, weavers, past and present here in Aotearoa.

Since that first encounter, I have continued to follow Panther’s work. The pieces she creates showcase the creamy white texture of the muka. The empyrean lightness of the lace is balanced with tight tessellations and the strength of the thread. In some of her pieces, she has played around with tints that complement the muka. In others, she has experimented with silver cast from the original lacework. In a recent collaboration with fellow jeweller Joanna Campbell, Panther re-created European réseau patterns, with the earliest dating back 300 years, which were set as brooches in silver rounds.

Panther’s Samoan whakapapa, genealogy, has a strong influence on her work and this is intertwined with the traditional lace-making practices of her English and Irish ancestors; contextualised within her home of Aotearoa. This is representative of the complex layers of cultural identity that are a familiar feature of the New Zealand demography. In Panther’s words,

Coming from New Zealand, which is such a multi-cultural place from where so many of us don’t originate, sometimes it’s hard to know where you fit into the big picture. This has led to a lot of my work being about exploring my own heritage. I use muka in my work to incorporate New Zealand; England and Ireland with lace patterning and the Pacific with materials and motifs of Samoa. This way I can create my own cultural identity and tradition.

Her 2016 Placeholder works are a clear example of this fusion of cultural identity and of the fresh synergy Panther creates by combining material and technique. The luminescent parau, pearl shells, add a rich opulence and evoke a visceral aesthetic connection to the moana. 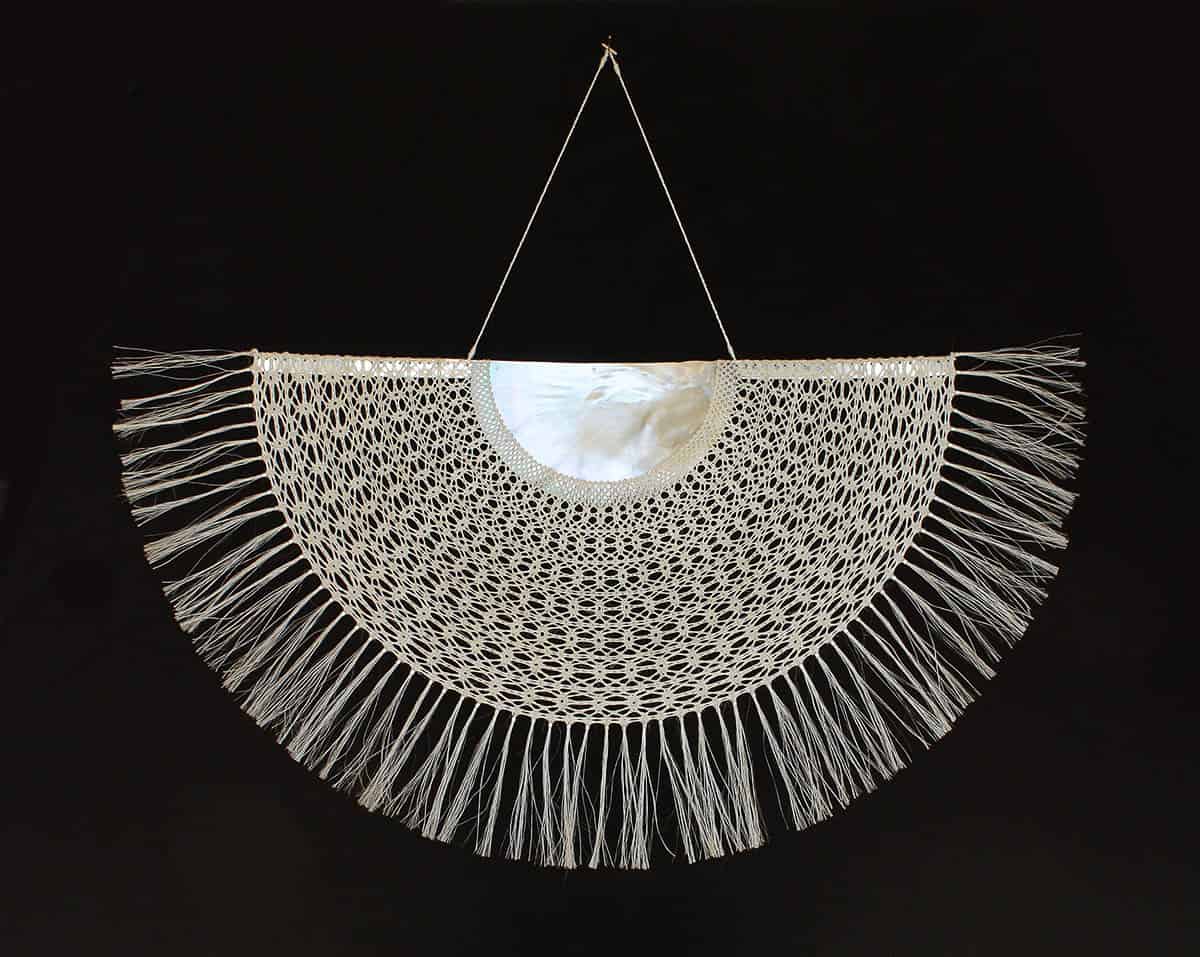 Panther’s recent lei are another example of the artist’s exploration of and connections to the cultural forms and concepts of her ancestors through her practice. Lei are important throughout the Pacific Islands, fabricated from both man-made and natural materials and used during formal ceremonies as well as for less official occasions.

The lei pieces hold special significance for Panther, and were inspired by her relationship with her grandfather, who she met later in life and was able to connect with before he passed away in his chosen home of Rarotonga. Alongside these memories, Panther’s Lei reflect her own associations and experience of lei as symbols of welcome and acceptance. 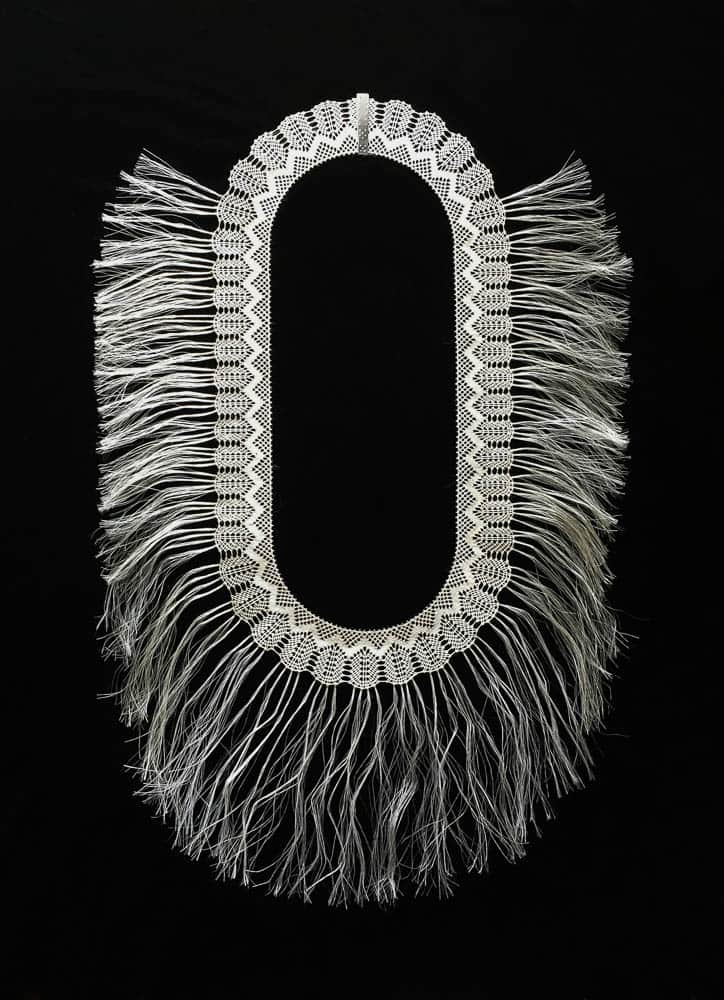 Panther came across lace while she was in her final year of studies in photography at Elam School of Fine Arts in Auckland. An aunt suggested that she try out lace-making classes at the local Titirangi Community Centre. This was the first step down a route that would see her changing focus from photography to more deeply explore the practices of making lace.

Around the same time, she started working with muka. As her skills developed, Panther felt removed from the linen and cottons usual for lace-making and sought out a thread that would ground her work in Aotearoa. The first muka she tested out was an old fluffy bundle her mother found on Trademe. She then worked with fibre that had been prepared by weaver Karen Warren, which is when she really started to understand its qualities and appreciate how it could work as lace. She began to investigate suitable harakeke varieties and to prepare it herself using shell tools.

“for a singular fibre it talks so much of New Zealand, and secondly, it is such a beautiful material to work with…finding a material that connected the work to New Zealand helped contemporise lace for me”

Muka, also known as whītau, is a fibre that can be extracted from certain cultivars of the harakeke, or phormium tenax. Harakeke is commonly known as New Zealand flax, although it is in fact completely unrelated to the European flax plant. For Māori, harakeke has its own whakapapa of connections to tīpuna, ancestors, and to the physical world of land, flora and fauna. Prepared muka is soft, lustrous and durable. The fibre has been extremely important for Māori since humans first arrived in Aotearoa. Fundamental to textile manufacture, it was used in almost every aspect of daily life – from fishing nets to roof thatching. Weavers able to make the finest muka and work it into textiles were and still are highly regarded as master practitioners.

Panther’s work shows her deep respect for the materiality of muka and celebrates the centuries-old European traditions of hand-crafting lace, bringing new relevance to both.

In this age of mass production, fast fashion and free trade, it is difficult to comprehend that lace was once highly, even desperately sought after. The textile is deeply embedded in millennia of human history and there are many examples where the lace-maker has been represented, often romanticised, in art, or where lace features in a subject’s attire.

The history of lace is full of fascinating stories, some of which can only be imagined using the earliest surviving pieces as touchstones, for example, the Egyptian hood fragment thought to be more than 2000 old in the collection of Boston’s Museum of Fine Arts.

One dramatic chapter played out in England during the late eighteenth century when Parliament had banned the importation of various items including lace, under pressure from English manufacturers. Those who desired the higher quality French or Belgian laces turned to smugglers bringing in the contraband. One source estimates that between 1768-1800, around 15,000 metres of confiscated lace items were sold at customs auctions. 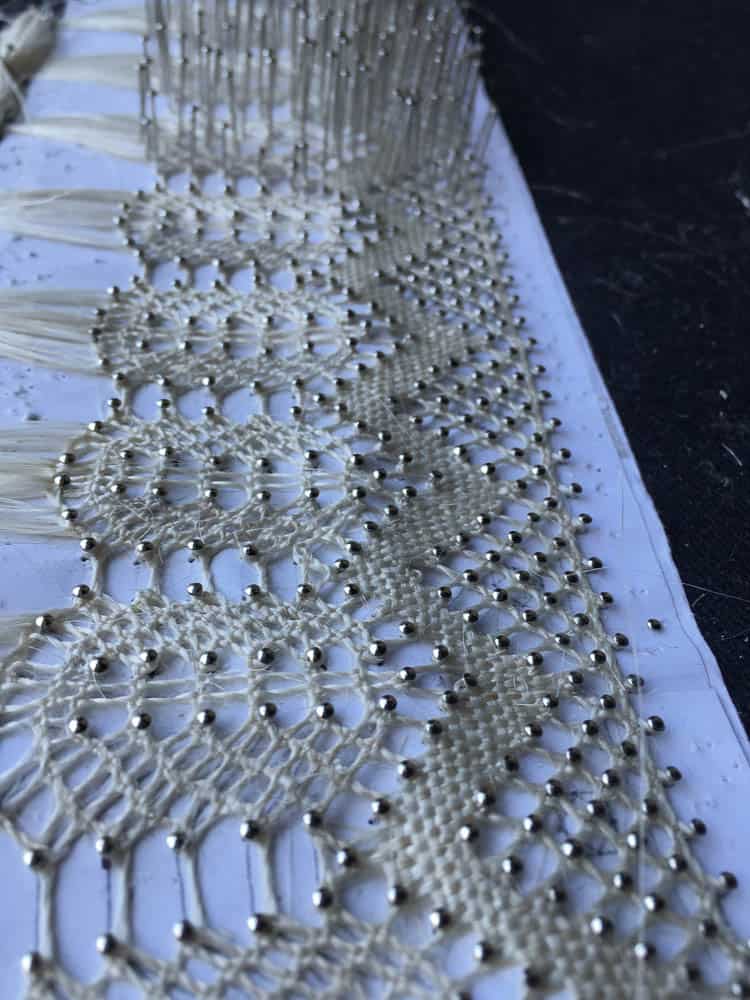 There are two main techniques of lace-making. One of these is needle or point lace. Panther uses the second method, bobbin lace, sometimes known as bone or pillow lace. The work is incredibly time-consuming and requires dexterity and meticulous concentration. Long bobbins hold the thread. These are worked around pins, which follow the shape denoted by the paper pattern beneath, creating a series of repeated loops and knots which form the lace. Panther’s Avifauna series reference this lace-making process, with curled rounds of harakeke anchoring her laced tūī, kōtare and other native birds.

Lace presented in this contemporary way, using muka from the land and patterns inspired by ancestral moana peoples, allows Panther to draw together a series of relationships and connections for the wearers of her pieces, a relationship between them, the land and the multiple histories and cultures of its people, traditions and identity. 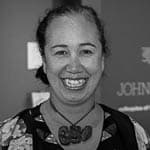 Tryphena o Rongomai Cracknell descends from the Rongomaiwahine iwi based on the Māhia Peninsula. She has worked in the arts and culture sector for two decades as a curator, writer, historian and tried out many other aspects of museum and gallery work. She has worked closely with taonga Māori throughout her career, as well as with contemporary art. She is particularly passionate about textiles and fashion. (And also about her home menagerie: 3 sons, a partner, 2 cats, 3 chickens, 1 rabbit and a few thousand bees).

From Brunswick to Ahmedabad: The Hand/Eye Project
Aziz Murtazaev ✿ Why I returned from London
Gallery VOICE-Ushida Collection
Shyrdak: A sunny day in Kyrgyzstan
Ulos through the viewfinder
Charlotte Haywood: Weaving ideas
Pathways through The Social Outfit
Kete photography