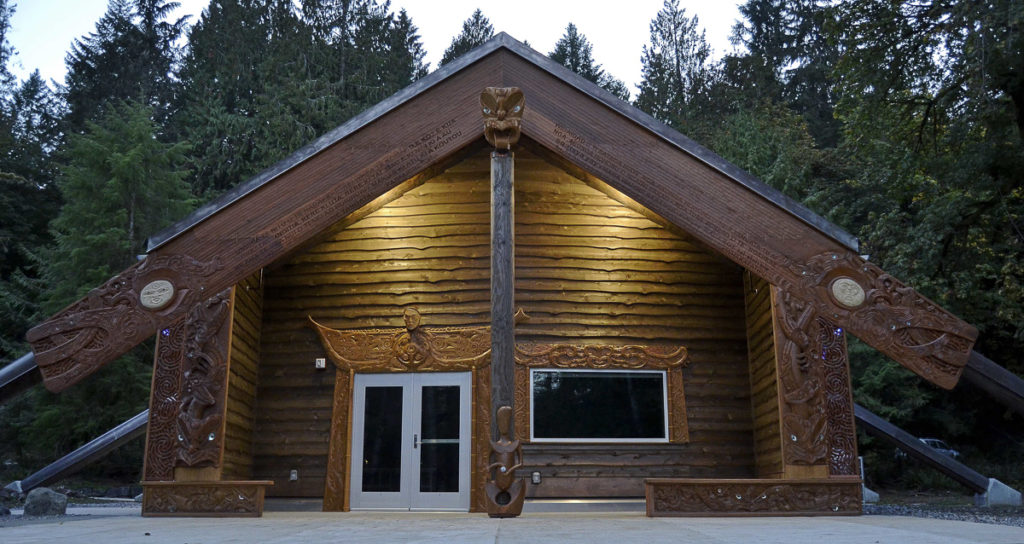 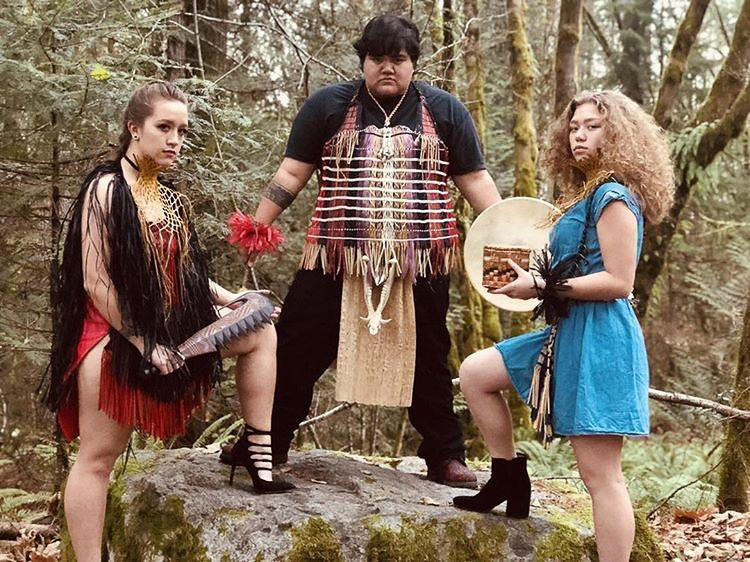 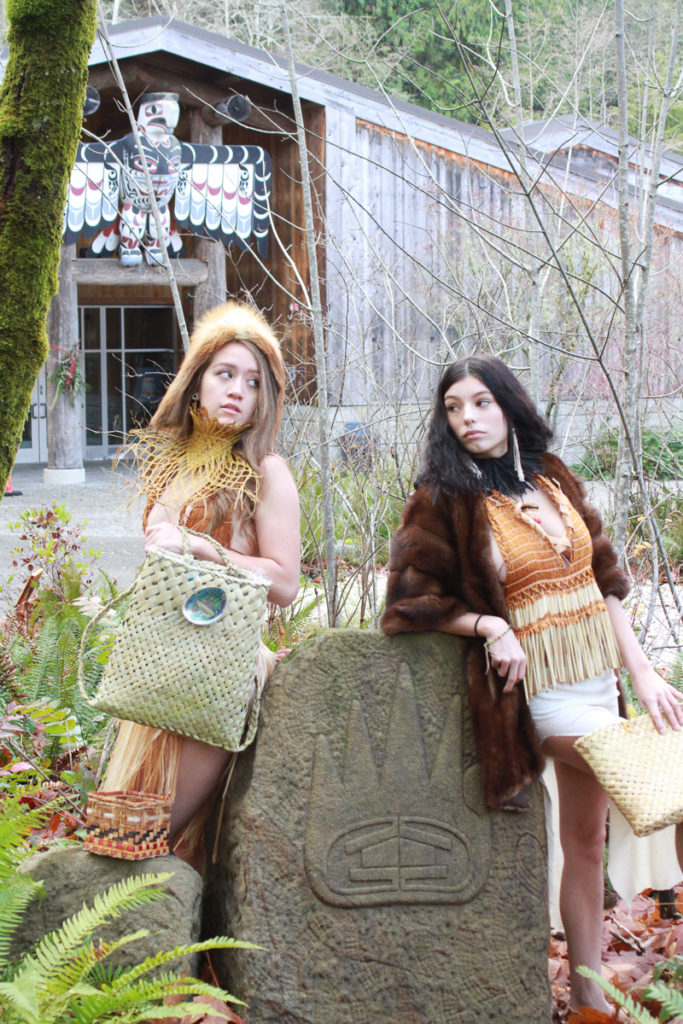 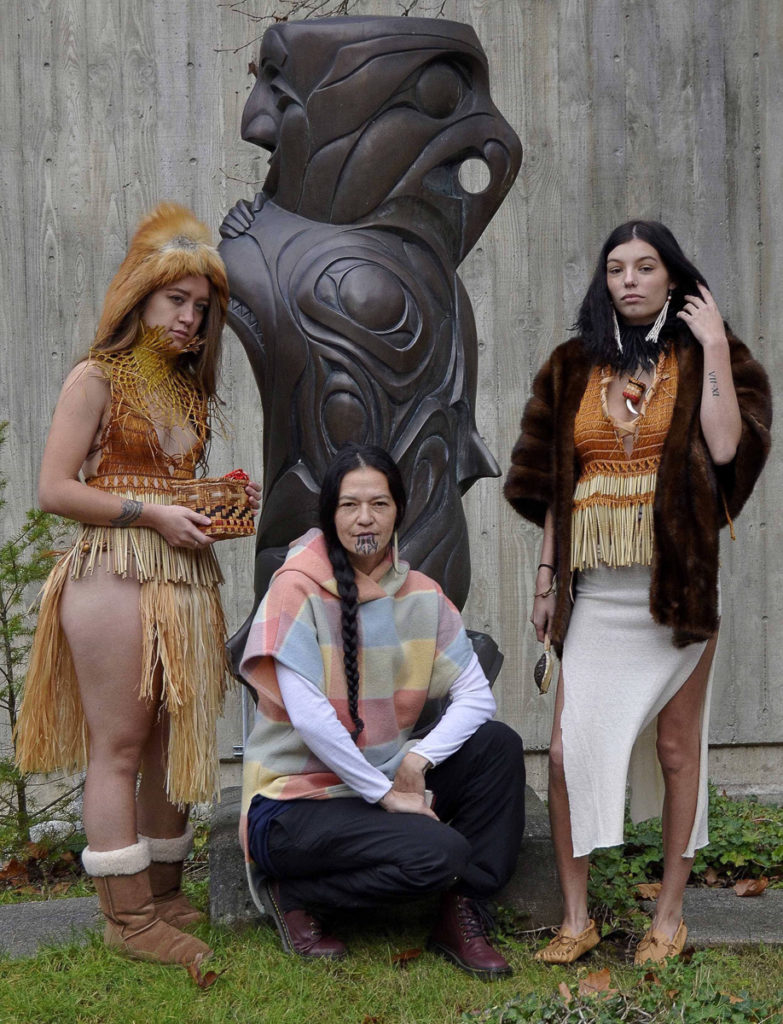 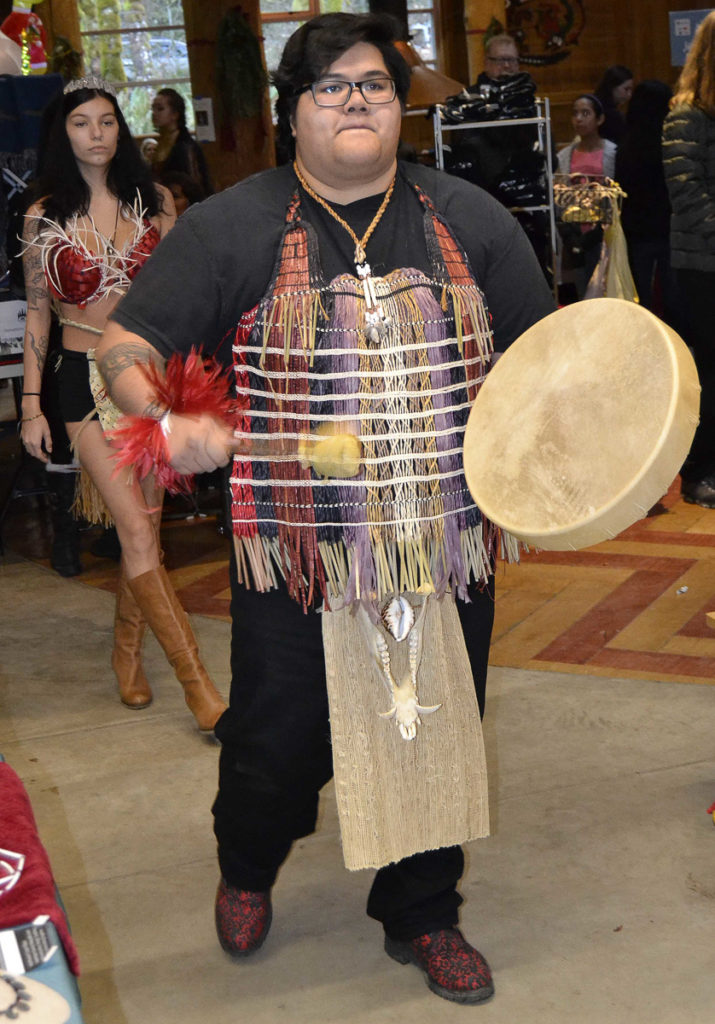 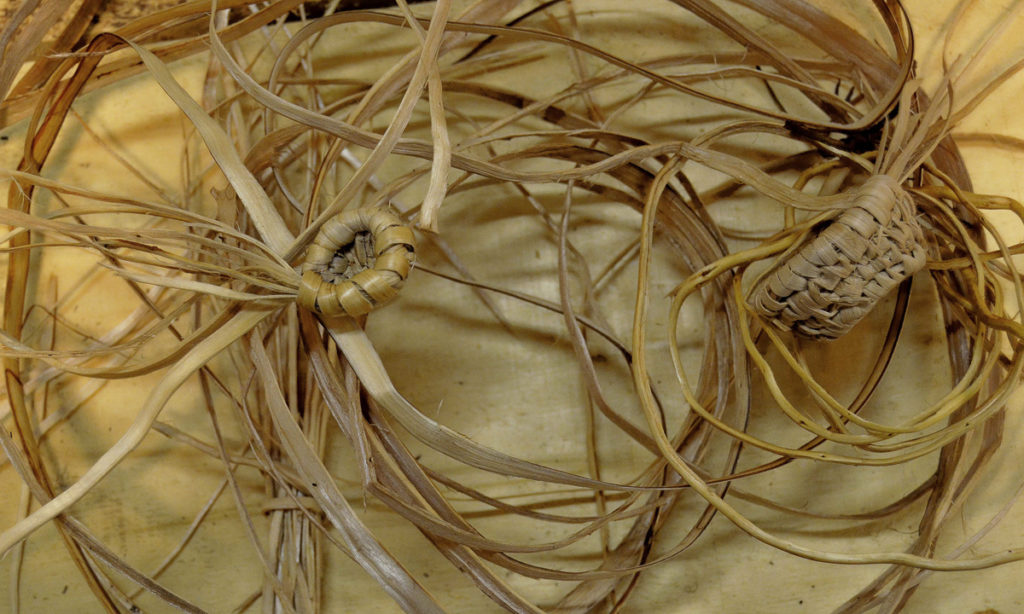 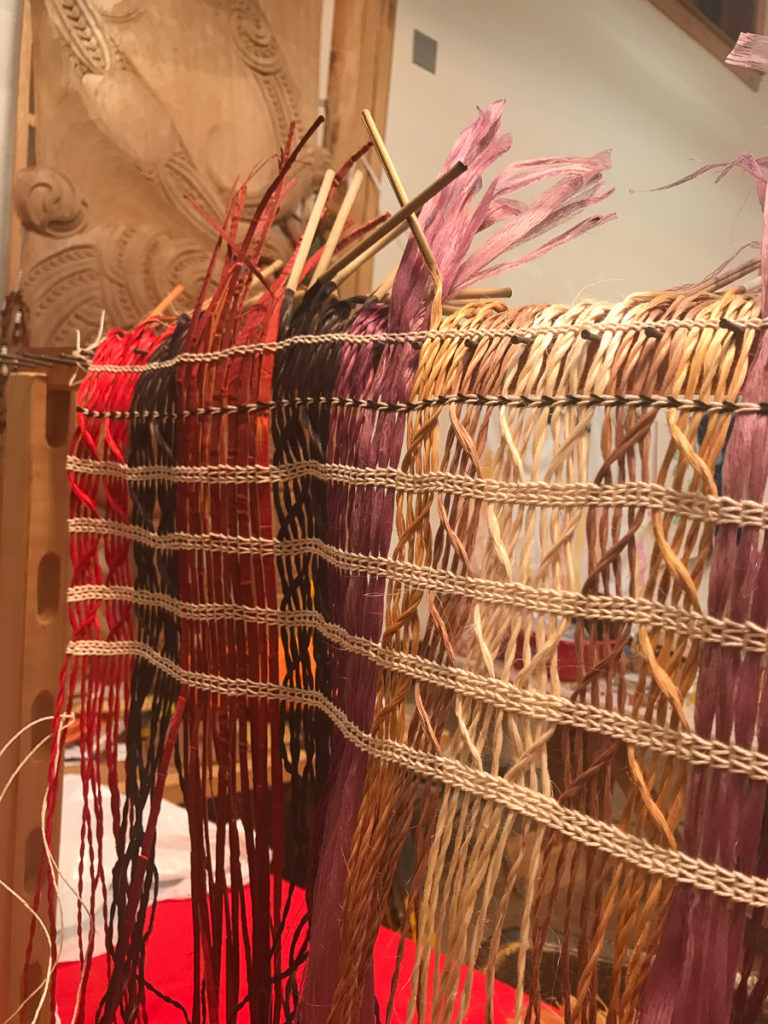 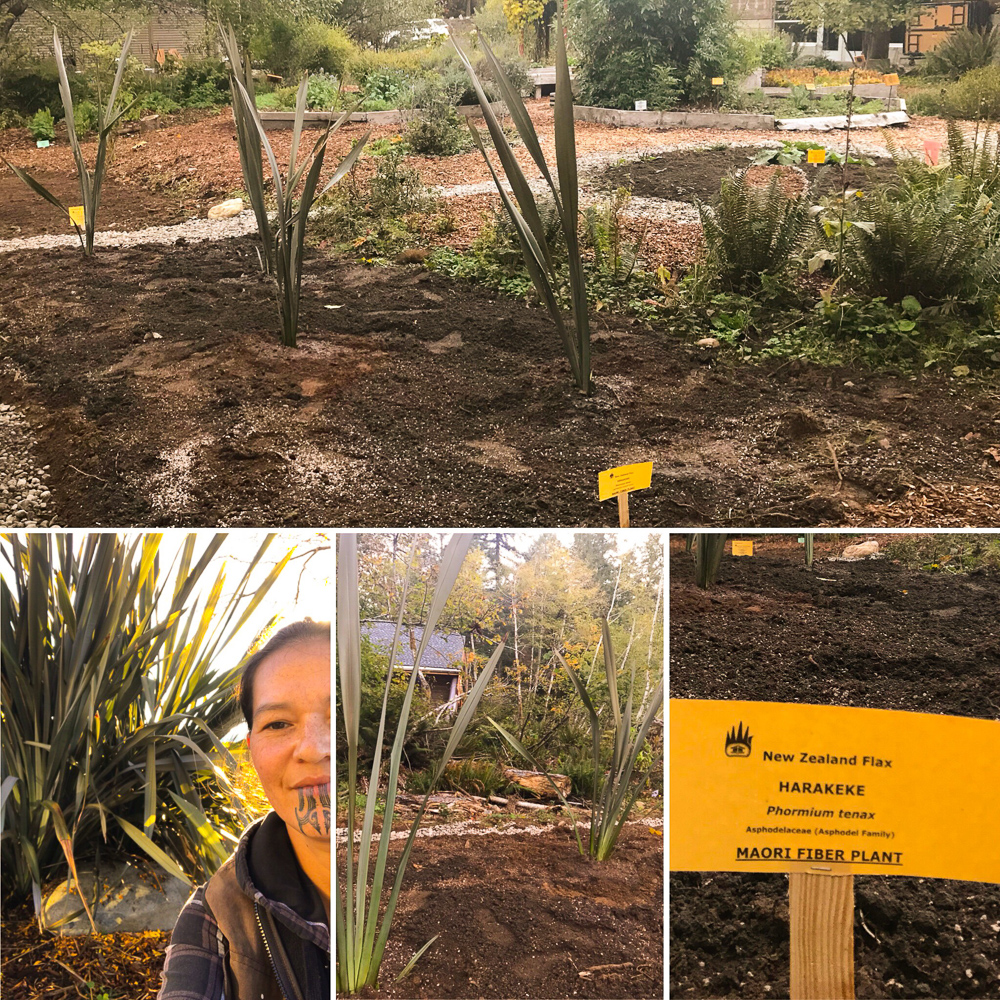 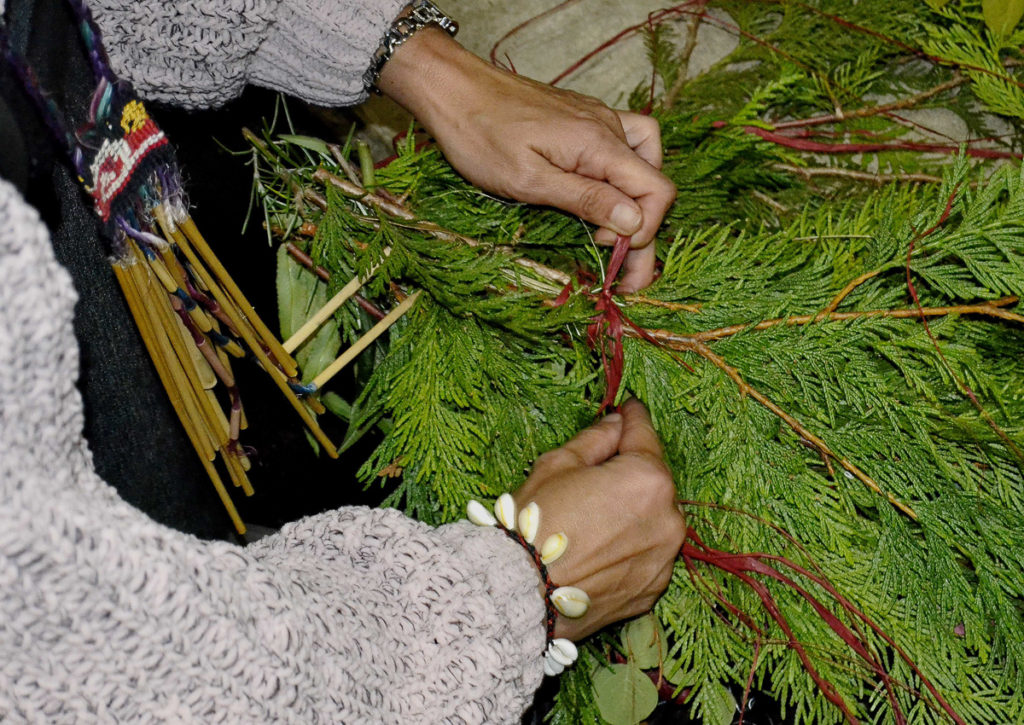 Ruth Woodbury had been working as an Art Educator at the Corban Estate Arts Centre, developing programs for school-age audiences. Corban had been working with a diverse West Auckland community. After many years fostering other people, Ruth felt it was time to develop her own art form.

The Toi Sqwigwialtxw residency is located in the “House of Welcome” Longhouse Education and Cultural Center (Longhouse), which was opened in 1995 at The Evergreen State College in Olympia, Washington. The call for applicants appealed to her because it stressed community engagement. She felt, “Oh my goodness, these guys know what’s important”. She was invited by Toi Māori Aotearoa to come to Wellington for a Skype interview. It was the first time the host was choosing the resident.

After delays in Hawaii, she arrived at the opening of a new fibre studio, just finished by Maori master carver Lionel Grant. On the second day, they had an influx of hundreds of weavers from across North America. “I saw myself as part of the team.” They started teaching her how to follow local custom, such as raising both hands above the chest with palms facing inwards as a gesture of thanks.

One story that particularly interested Ruth was about the respect that Salish have for salmon. Traditionally, salmon are viewed as gift-bearing relatives: the first salmon of the season is welcomed in a ceremony of great respect. She was told that salmon are believed to originate in Aotearoa New Zealand. There is belief in an epic canoe journey of the Makah tribe as they chase the salmon “with the sun on our back” on the way to Aotearoa.

Ruth arrived with an open mind. “I didn’t want to turn up with a fixed idea or project concept. I needed to pause and learn all the things that I didn’t know that I didn’t know.” She became close to the weaver Theresa Parker, who introduced her to the Makah tribal lands. “We really clicked.” Theresa advised Ruth to visit a museum in Seattle to see the cedar cloaks.

After encountering these magnificent cloaks, Ruth decided to take up the challenge of making a Pacific Northwest-inspired version. The first challenge was to find well-seasoned cedar, at least four years old—“You can’t pound fresh bark.” Old cedar becomes fibrous and soft like felt.

Locals were impressed with Ruth’s skill in making. She recalls Teresa saying “You know Ruth, you look like someone we see in movies. No one does what you are doing.” She received a very positive response during the visit and many learnt from her how to hand stitch or whatu on the cloak. The locals also invited her to view their own pieces from the museum stores collections.

Makah / Neah Bay community had set up a museum after artefacts were discovered from an old landslide due to rising tides and then extracted by archeologists. These collections and items have never left their territory as is their sacredness. Rather than be stored elsewhere, they created their own keeping place.

The most fabulous day. We were sharing this passion. They shared creation stories with me. During lunch hosted by the Senior Citizens, a lady said some Maori words during conversation with me. It made my heart explode.

There were some challenges. Once she was at a gathering and talking with the President of the campus. “I remember one of the faculty coming up to me saying, ‘I saw you talking to the President. Are you published? I don’t believe I’ve seen your name anywhere. How did you get here?’ I froze. I thought, why did I come here? I’m not just an academic. I’m a maker. I realised I was doing the right thing.”

At the end of the residency, during the Native Arts Fair, she was able to present the cloak she had made along with her collection in a fashion parade.” To share it with the community of students, faculty and established artist was an honour.”

The residency inspired Ruth to move back to her own tribal land, Hokianga harbour, the place where her ancestor Kupe the great navigator arrived. “I’ll be working on our marae while I’ve got me young legs. We have to keep inspiring our communities.” A local museum is currently being built and these encounters will enrich her contribution.

She treasures a blanket she was gifted, the last from the Longhouse 20th Anniversary collection. It’s a thunderbird, a symbol of protection and strength and the carved symbol will greet you at the Longhouse entrance.

Ruth Woodbury (Ngatī Korokoro, Te Pouka, Ngatī Wharara, Te Hikutu) is an expert weaver and educator. In the past, she has collaborated with the Kanaka peoples of New Caledonia, Aboriginal and Torres Strait Islander peoples of Australia, Moriori of the Pacific, Nlaka’pamux Nation, Tlingit, Inupiaq of Alaska and the Paiute of California. She can be found on Facebook at Raranga Creations.

Spider Woman's Children: The next generation of Navajo weavers
Tales of Wonderland: Schmuck aus Neuseeland - jewellery from Aotearoa New Zealan...
The fabric of memory: Story cloth as art and history for Hmong in USA
Cherokee doubleweave baskets: “The handsomest baskets I ever saw.”
How an island makes its makers: The artisans of Gabriola
Tania Larsson ✿ Hide uncovers the hidden
Tying down art in my own public Idaho
Katie Miller ✿ Seattle lightscapes