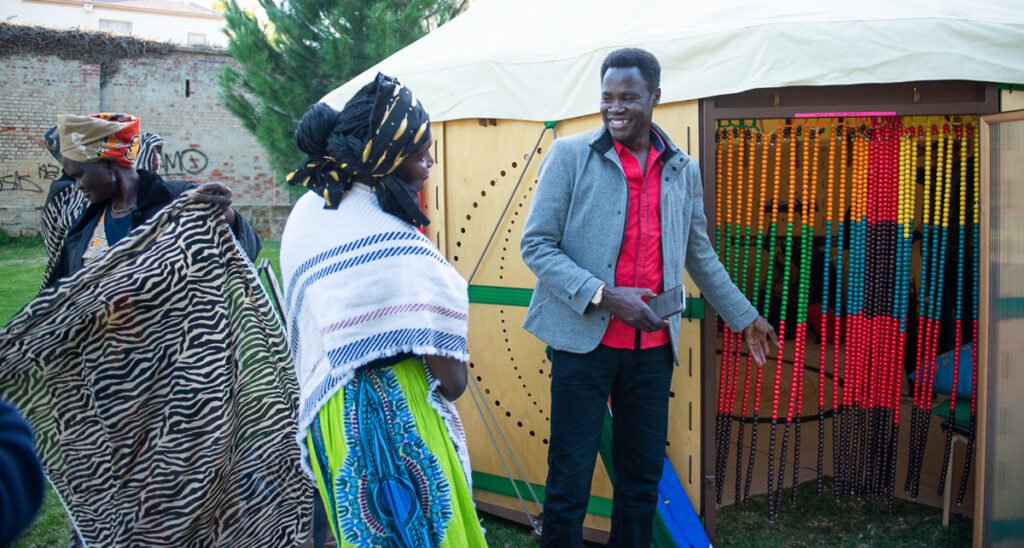 Kultur-All Makaan is a wondrous cultural centre for bringing together refugee cultures of Central Victoria, including the Sudanese singer Dabora Dout whose beads welcome visitors.

Kultur-All Makaan is a yurt-like structure that hosts artists and performers from the Central Victorian region. It was developed in collaboration with Hazara, South Sudanese, Karen, and Anglo-Saxon artists and artisans. Kultur in several northern European languages means “culture” and Makaan in different Persian and African languages means “the dwelling of…” also “food” in Indonesian. Kultur-All Makaan aims to be a place of daily cultural and artistic nourishment with and for all.

The founder Jude Anderson explains how the project developed. This is followed by a profile of one of the artists, Dabora Dout. 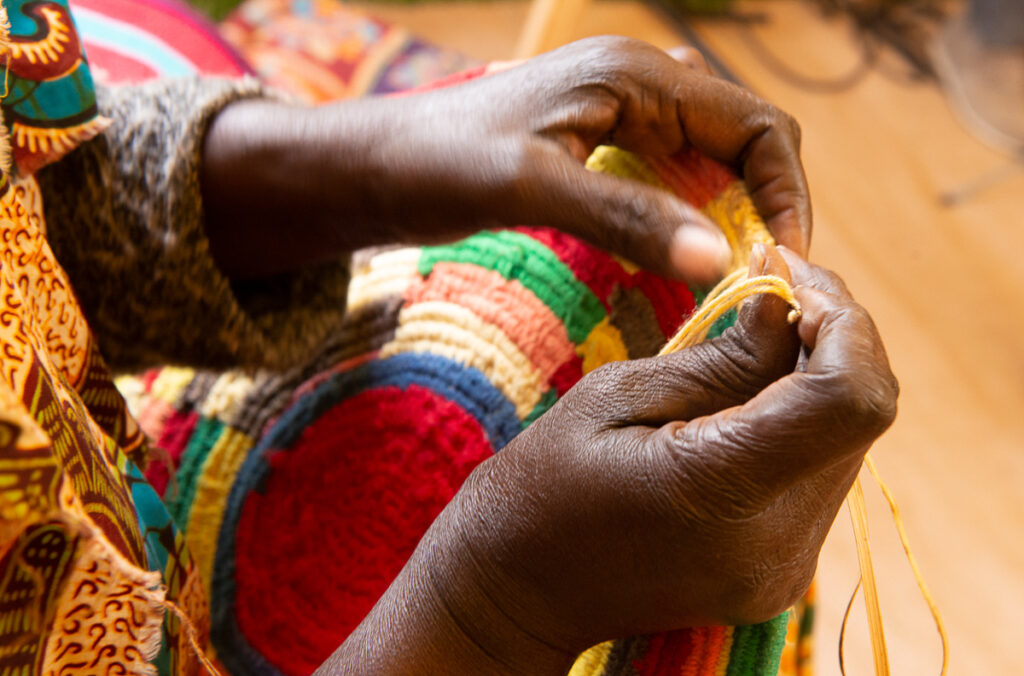 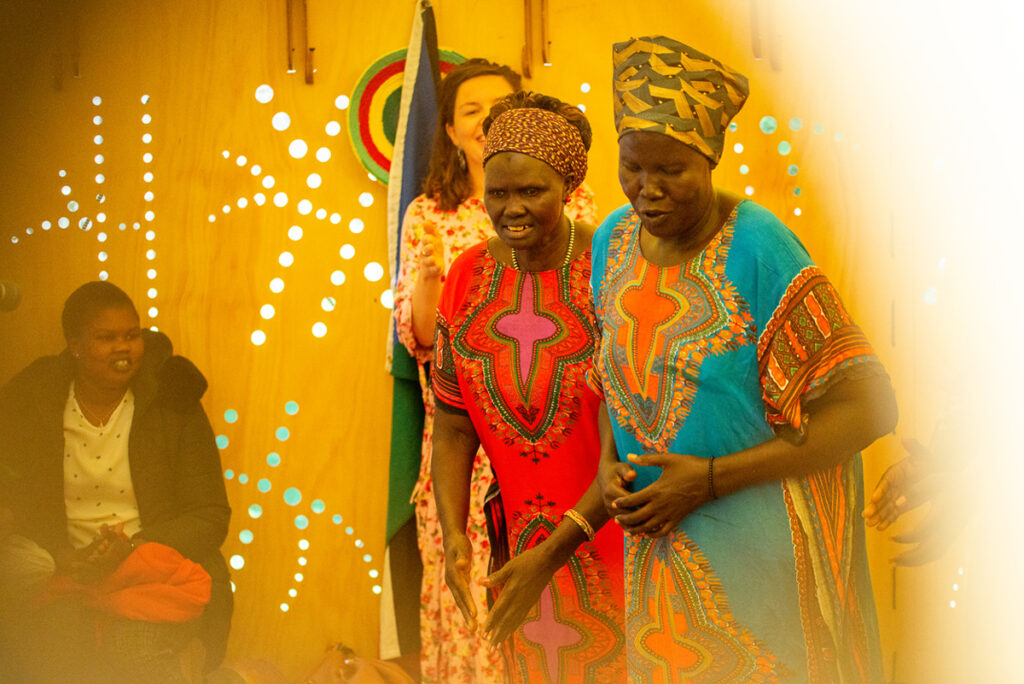 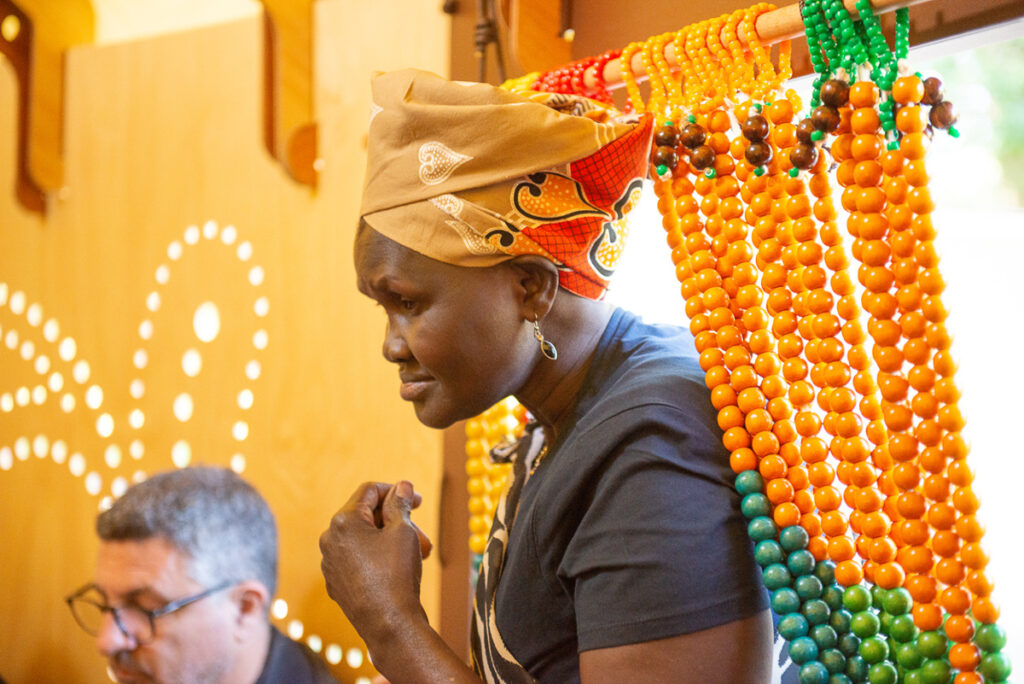 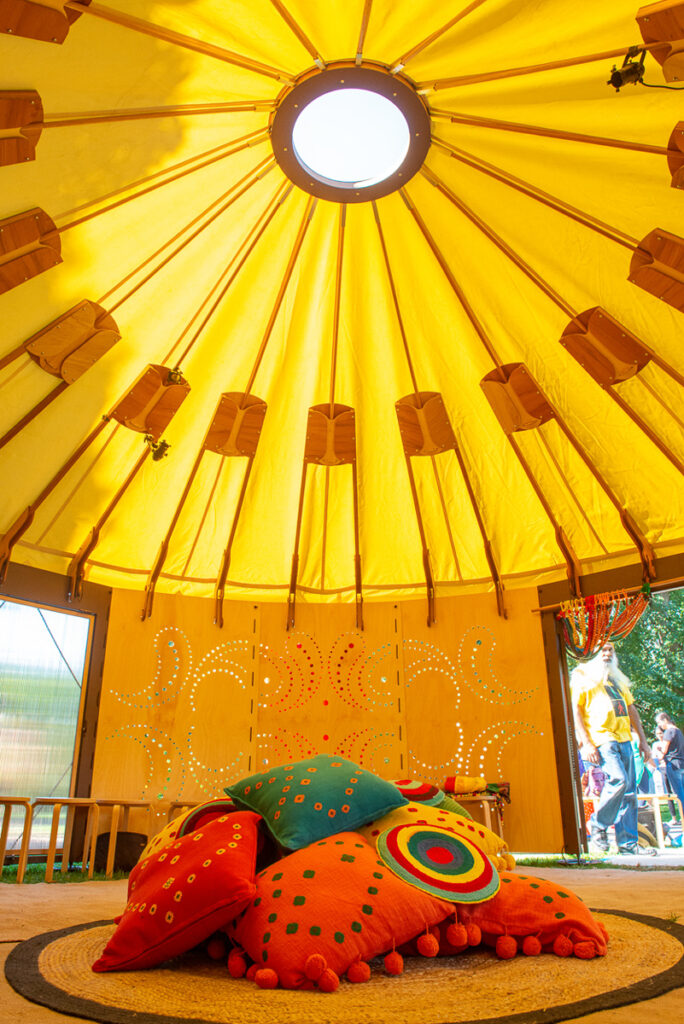 Two critical things happened that ensured my involvement in the Kultur-All Makaan. In late 2016, a large aggressive group of extremists gathered in Rosalind Park, Bendigo to protest the local Council’s planning decision accepting the building of a mosque. Members of this group were later arrested and criminally charged under Victoria’s Racial and Religious Tolerance Act.

As an Artistic Director of arts organisation Punctum (based on Djarra country, central Victoria) and often working in Bendigo, one of the questions I always ask is “What is the nature of what I’m involved in doing?” In this instance, I thought it was important that I was involved in actively resisting this specific racism. The nature of this resistance is more productive if through art and collaboration it builds bridges and opens doorways connecting people and celebrating practice and contributions.

I started considering ways to go about this. At the same time, I was creating the Public Cooling House with designer Morwenna Schenck and Punctum artists. It opened to the public in early 2018 and immediately it resonated with culturally diverse people who expressed how the space felt familiar, safe and calming. It was here that I thought that the Public Cooling House could become a structural template for a new kind of cultural centre and be redesigned, programmed and presented by culturally diverse artists, artisans and crew in our area—in this instance South Sudanese, Hazara and Karen artists and artisans.

I met with Linto Thomas who is one of the coordinators with Loddon Campaspe Multi-Cultural Services and 18 months ago he introduced artists and arts facilitators to the project. Together these artists, artisans and arts facilitators worked with their communities and the artists associated with Punctum and as a group we created the Kultur-All Makaan. Many government, philanthropic organisations and local cultural institutions have supported the project. So in this way and many others the Kultur-All Makaan is a doorway to connection and social cohesion.

We also built connections between the staff at major cultural institutions, the artists and their communities through holding workshops and meetings and discussing exhibitions in these institutions so that familiarity and connection was constructed with them. After that, it was really about opening up discussions to understand each person’s relationship to creating and testing the boundaries of their practice and where that might lead them. After 18 months, the end result is that this is no longer a notion, it’s a real cultural centre called the Kultur-All Makaan meaning place of cultural nourishment for all. Its name, exterior design, interior fit-out, performances and program were devised by the entire group of artists and artisans with whom we collaborated. It is a flat-pack design and was built in six hours by a crew of four in which many forms of cultural exchange and performance can take place. 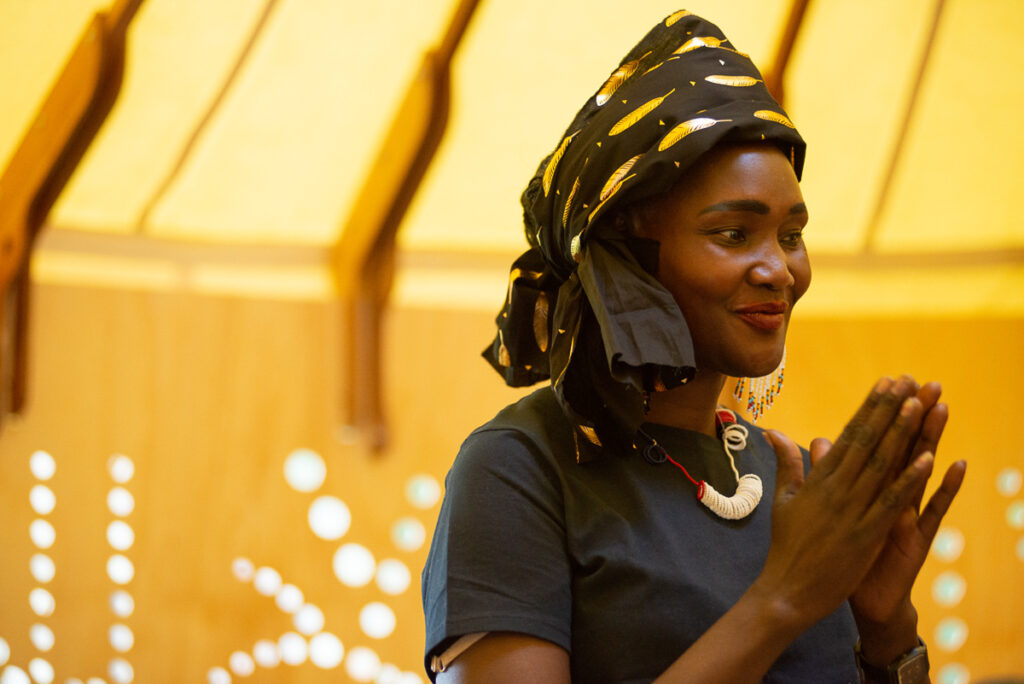 Dabora Dout grew up in Douk country, South Sudan, where she remembers mango trees, corn and cattle. There was no reason to want to leave before the start of the civil war.

During the civil war, she moved to Khartoum in 1991 and was married in 1996. She moved to Egypt in 2001, where she had a son. Arriving in Australia offered a pleasant surprise: “I found more family here that I didn’t know I had and the people that I have met are now friends, which is a blessing.” She brought the craft of beading with her. “I learnt it from my mother when I was a child because our female elders always did such activities and enjoyed it. “ She likes to cook kisara, a thin bread pancake, and aswab, an eggplant salad.

Dabora made the door entry beading for Kultur-All Makaan, which she originally learnt from her mother as a child, “…because our female elders always did such activities and enjoyed it”. She also composes special songs for her performances in the Kultur-All Makaan. She has produced three CDs of her music. One of her most popular songs is “Pinta nalich wawalk: Thank god, god is with us.” 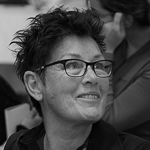 Jude is an award-winning artistic director living and working in central Victoria where she founded Punctum Inc. She has devised performances in many countries and with many people of diverse cultural backgrounds. Her productions have been commissioned for major international festivals and programs around the world. She enjoys living regionally, regenerating land, and sharing food. Anyone can follow Punctum on Instagram punctuminc or Twitter @punctuminc, or Facebook and Punctum’s website for project and program updates.

The Eastern Cape made visible through jewellery
Wissa-Sophy: Back to the woven garden
Waterfall in a box
Iziqhaza: Designs that open your ears
Vipoo Srivilasa: Will my heart remember?
Izandla Zethu: Fine jewellery with what's at hand
Urgent Adornment in South Africa
My father was an elephant: Clay dreams in Nigeria