Art protects us and our shared world: Two messages from Indigenous Brazil 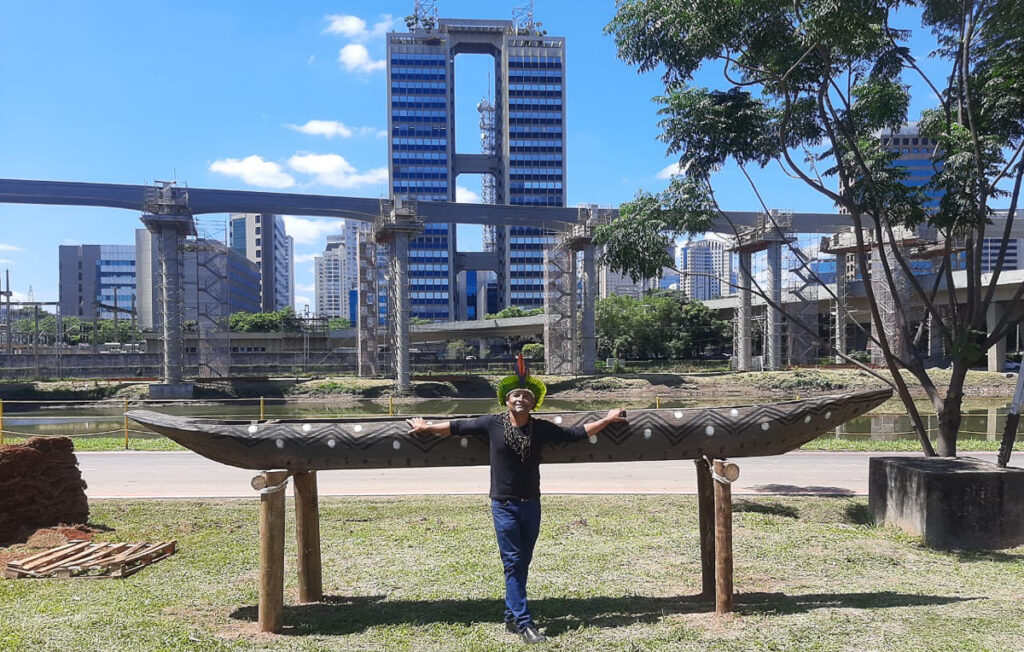 This is the story of two Indigenous cultural works that have been installed in a Bruno Covas Park, São Paulo. They are testaments of First Nations culture for the eyes of the subsequent peoples who endanger their world. The first is presented by Arassari Pataxó of the Pataxó people.

The Pataxós today are the ninth most populous indigenous people in Brazil, with more than 23 thousand individuals divided into many villages located in three different states: Bahia, Rio de Janeiro and Minas Gerais. The name “Pataxó” cannot be translated, it comes from the sound of sea water when the water hits the land and makes “pa-ta-xóóóóó”. They speak Portuguese and the indigenous language Patxhohã which means warrior language.

Arassari Pataxó defines himself as “a warrior who fights for respect and for the rights of indigenous peoples in Brazil”. Through Indigenous leadership, as a representative of the Pataxó ethnic group in southern Bahia, where he was born, Arassari wants to open the world’s eyes to the importance of keeping the indigenous peoples in the forest, on their land, showing how they respect and live with it. His village is in the south of Bahia, in the municipality of Porto Seguro, within the Monte Pascoal National Park.

Art speaks for us

I said: hello, how are you, my name is Arassari, I am very happy to be here bringing you a little of the culture of my people.

Today I came to talk about the importance of my culture. The Pataxó People. The sound comes from the seawater hitting the rock, it means the sound of seawater.

Art in my culture is like a protective framework. My culture is protected through art. My painting, my headdress, my clothing are made by the hands of my elders, my ancestors, and today it is very alive as a form of protection for my generation and the future generation, because all teaching is passed on from parents to children and art ensure that this millenary tradition is never lost. It is a way of protecting this ancient culture every day.

The culture of our people is what transforms us into a living people from our languages, our traditions, our songs, our medicine.

Seeds provide our encounter and our connection with Mother Nature. With this awakening of indigenous peoples and because we are the guardians of the forests, we do not have the right to voice and art has spoken for us, in this scenario of environmental destruction, of persecution of our cultures here in Brazil, in our villages, especially the destruction of the Amazon Rainforest. So art has spoken for us, where we cannot go, our art goes and speaks for us.

Who has played this role today is a wonderful person, Maria Fernanda. She entered indigenous lands, mainly my people, and brought the voice of the forest peoples to São Paulo and the world. Through art and design, she has transmitted wisdom and this call for help in favour of the defense of the environment, in favor of the defense of indigenous peoples. Because all our art is not intended for the market, it is intended for transformation. This is art, when it has the potential to bring the history of a people, it has the power to bring to people the history of a particular people who, in the face of five centuries of resistance, manage to live and maintain their traditions.

Through the design that Maria Fernanda has done and her work, she has brought this voice from the peoples of the forest. The Pataxó people have expressed their speech, their entire historical and current claim through the space she has given us through art.

“Our art is there speaking for us.”

I believe that art, it is life. Art is life. If it weren’t for art, our Pataxó people today could be extinct. Through art, Maria Fernanda opens a space for the voice of those people who suffered, who were victims of war and extermination. Through art, you can learn about this history, because our art is there speaking for us, although the Pataxó couldn’t be there. Whoever knows our art and has access to art will know that this is the art of the Pataxó people or indigenous peoples.

Art is a tool for transmitting wisdom to my people. Art is also a tool of resistance. Through art, people start to give importance to the natives of Brazil.

No people can live without art. Because this art that you have access to today has a millennial history. It was not an object for sale, it was a sacred object, in which all women and children, when weaving a necklace, when weaving a headdress, expresses the sacred and the respect for nature and all its elements.

We, indigenous people, are not the owners of the land, we are the children of the land, our relationship is one of protection, it is one of kinship. Art has been sending this message.

Anyone who buys any indigenous handicraft is acquiring a truth that little is known about: how fundamental the guardians of the forest, we indigenous peoples, are for their generations, for climate balance, for life.

When we have partners who have developed these works with great respect, with great dignity, it is a moment of transformation for our people and a lot of hope for a better world.

Our thanks go in the form of an expression of art. This painting of my face, in red, in black, it symbolizes this issue of design, of the aesthetics that the animals of the forest have. For example, this painting is of a snake and macaw. Because the snake, the boa constrictor, for example, it is a sacred animal here, because we believe that wisdom is there.

My gratitude is that it is using art to draw attention to respect for indigenous peoples, with Mother Nature and with all human beings on the face of the earth. And also respect for all animals and for fauna and flora, because we all have the right to live in peace. 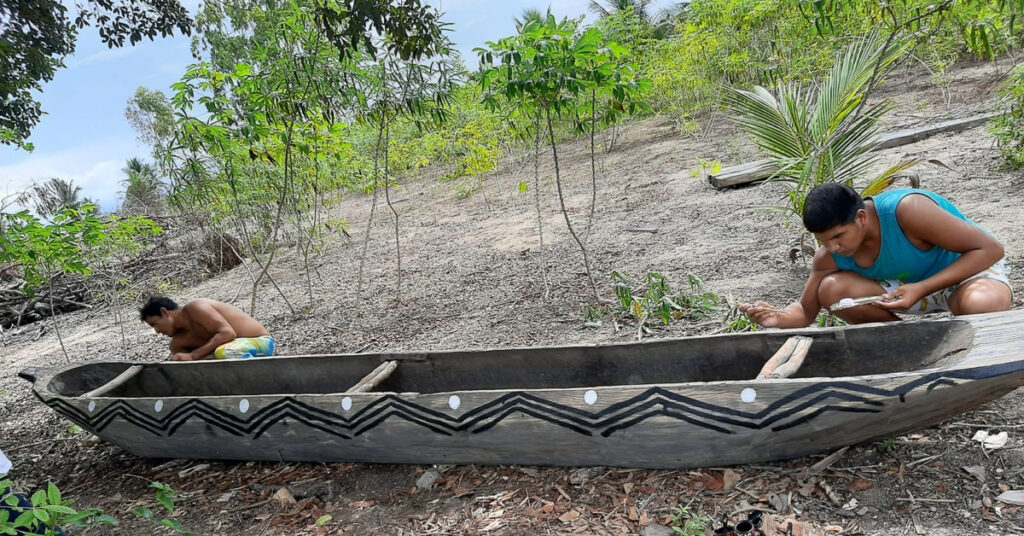 This is an original canoe of the Pataxó ethnicity measuring 6m in length, carved in solid wood. The canoe donated for permanent exhibition at Parque Linear Bruno Covas is old and original. It has a symbolic and historical value for the Pataxó people, having been widely used in fishing activities, as a means of transport and also in traditional canoeing competitions. The finishing was carried out by Arassari and his nephews to be exposed in the park, giving voice and visibility to their culture, the struggle in defence of Mother Nature and the rights of indigenous peoples. 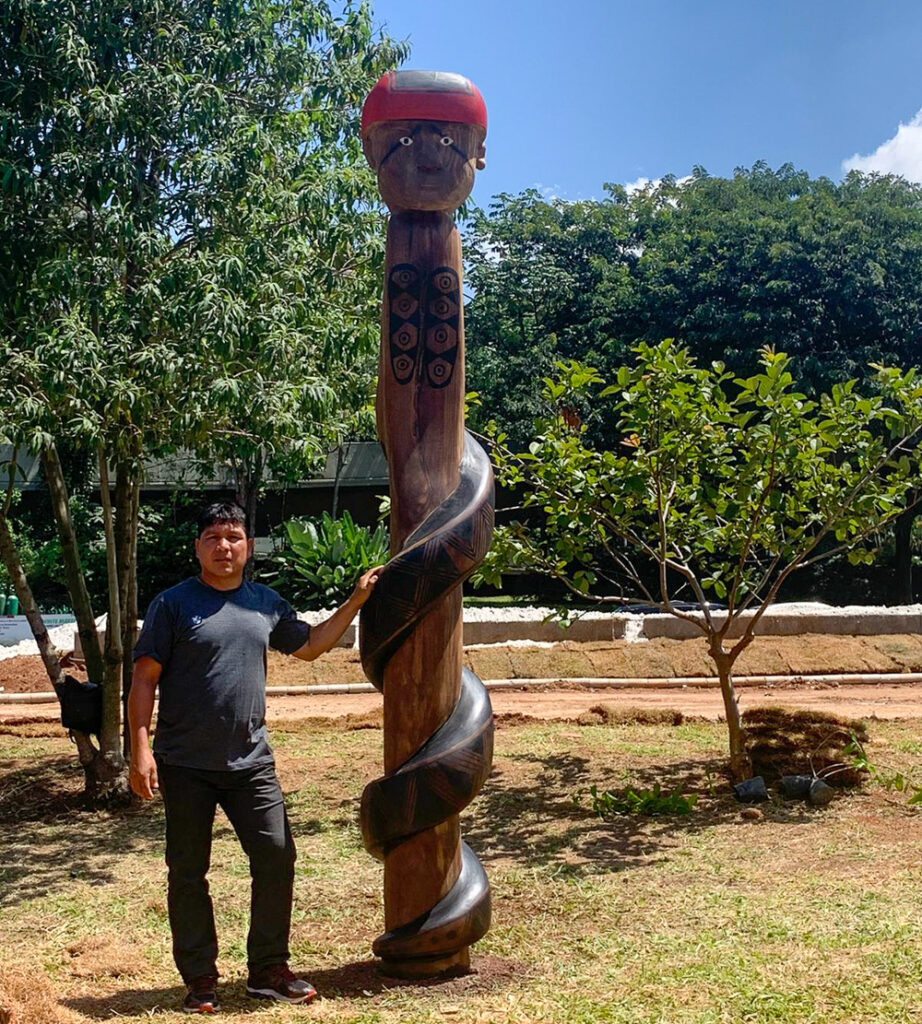 Kulikyrda ‘Stive’ Mehinaku, artist and representative of the Kaupüna village, of the Mehinaku ethnic group, in the Upper Xingu, where he was born and works.

Inhabitants of the cultural area known as the Upper Xingu (encompassed by the Xingu Indigenous Territory), the Mehinaku are part of a broad complex of peoples little different from each other. The specialized system of commercial exchanges, the intersocietal rituals and the patterns of intermarriage at the same time entangle and particularize the Mehinaku from the other ethnic groups that surround them. However, amid their similarities with other Upper Xingu peoples, the Mehinaku consider themselves first and foremost Mehinaku, and pride themselves on being a special human community.

Excellent artisans, the Mehinaku preserve their traditional artifacts. It is up to the men to make the benches, masks and beiju shovels, in addition to the final lashing of the baskets. The women make buriti yarn, hammocks, baskets and mats.

The sculpture of the man who became an anaconda, a work sculpted for the Bruno Covas Park collection, represents an important myth of the Mehinaku culture. It’s about a married man who was being betrayed by his wife with a younger guy every time she went to their plantation alone to work. One day the man arrived at the plantation and saw the two making love. He was very sad and returned to the village without letting himself be noticed. When the woman returned to the village, he pretended he didn’t know anything and said he would go fishing. While fishing, he caught a Matrinxã (a kind of fish) and placed inside it the egg of a snake that he found and gave to his wife to take to lunch in the countryside.

He waited a while and went after the woman. He found the two of them dating after they had lunch. Suddenly the boy felt bad, it was the egg taking effect and turning him into a snake. His legs stretched out and became the tail of an anaconda, as the effect began to travel through his body the boy cried and his tears became his painting. At that moment the husband approached and told the anaconda that she would not kill any human being, guided her to live in the water and said that she would become a medicine for her people and her lard would give strength and courage to the Mehinaku fighters.

The Indigenous totem is 360 cm high and 80 cm in diameter, the sculpture represents an important part of Mehinaku mythology. The totem was made by all the artists of the village taking turns till it was finished. 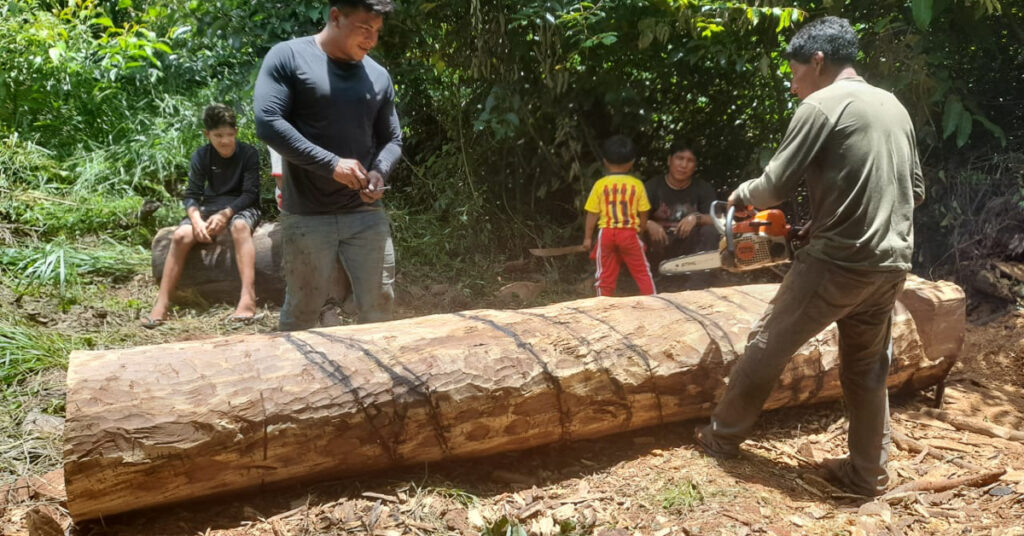 Kulikyrda “Stive” Mehinaku is of the Mehinaku and Aweti ethnicity. He is a technician in agroecology and an Indigenous Health Agent (AIS). He started making benches in his teens, at the age of 13, motivated by his people’s custom of producing these pieces for their own use. The possibility of commercialization was also an incentive, since, at the time, the sale of zoomorfos benches was the main source of income for the Mehinaku people, enabling trips to the city to take courses and purchase industrial objects that are now part of the indigenous daily life. His name Kulikyrda means the face of curica, a species of parrot from the Amazon region. He speaks the Arawak indigenous language and Portuguese.

The Mehinaku people reside in the Xingu Indigenous Territory, in the state of Mato Grosso, Brazil. Their main language is Aruak and they are currently divided into four villages: Uyaipiyuku, Utawana, Kaupüna and Aturuwa. They live by their customs and cultures, in ocas that house a whole family. They consume traditional foods made from manioc, fishing and game meat, such as monkey and today non-indigenous products.

They work all year round making their food and handicrafts. Men make zoomorphic benches out of wood, masks, oars, bow and arrows, baskets to carry cassava, headdresses and earrings. Women make mats, hammocks and baskets of food and fruit using buriti straw, a traditional palm in the region.

The Mehinaku people are also known for their rituals such as Tajuara, Tawarawana and Kuarup, which is best known, when they pay homage to their dead. On these days, they decorate themselves with necklaces, earrings and headdresses, paint their bodies with annatto, genipap and coal, dance, sing and play the flute. In the Xingu Indigenous Territory live six ethnic groups, with a total of more than 6000 individuals. Currently, the Mehinaku population is around 353 people, of which 20 live in the city. In the Kaupüna village reside 28 men, 28 women and 20 children.

Thanks to Maria Fernanda Paes de Barros for these stories.