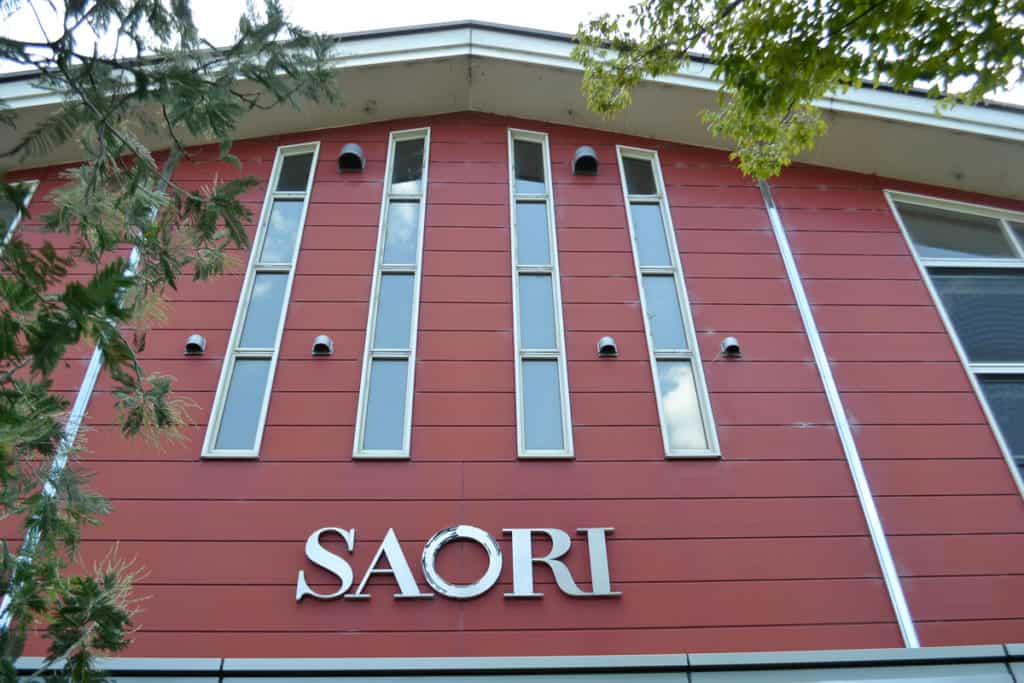 When travelling to handweaving villages throughout Asia I am drawn to, and sometime run to, the sound of the shuttle and beater connecting with every row of clothmaking on the handloom. In amongst the click, clack of the weaving process I ask questions of the weavers and try to breathe in  every little technique, subtle hand action and shape of the equipment to save for later review in my mind. But I am always an outsider, feeling apart from what is happening and what is being created. A separation between doer and onlooker.

When I first went to Saori no Mori weaving studio in Osaka, the home of Saori handweaving in Japan, it was a quite different experience. There was no separation and I was able to become immersed in the action immediately. In a suburban area about one hour from Osaka I walked through the sliding doors of the large red, American barn style building into what felt like a paradise to me. Rows of empty small compact floor looms calling me to sit down and weave myself. The shoeless environment of Japan on highly polished wood floors gave a quiet calming sense to the studio setting. It was a relaxing warm welcome to the space. The mesmerising coloured yarn wall seemed to yell at me with a painter’s palette and a promise of possibilities. The invitation to weave was real. 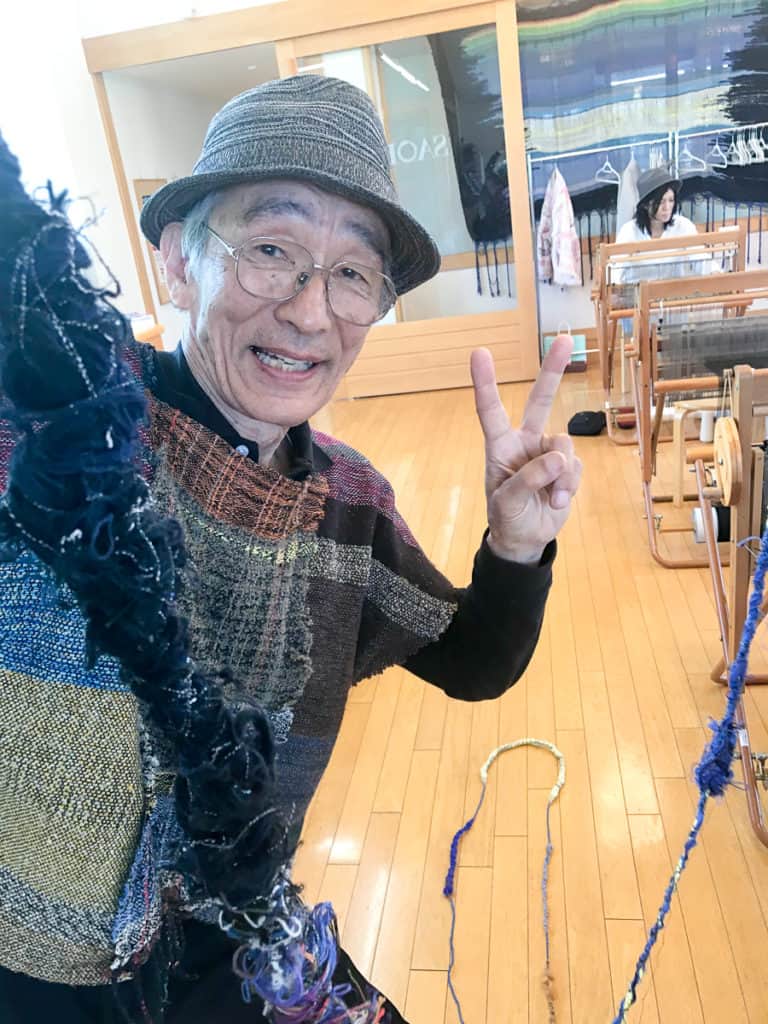 On another level, in this quiet, inviting environment the high energy of Kenzo Jo permeates the studio. Kenzo Jo is one of the founders of Saori (with Misao Jo, his mother) and it is his indefatigable character that sets the pace for open creativity. He has good English and an irrepressible sense of humour and fun.  Kenzo is clever and over the ten years I have known him, on each subsequent visit to Japan, I gain more respect for him personally and his dedication to Saori. He is an ideas person, continually thinking out new ways with looms and cloth making. His sociability and likeability greatly add to the Saori experience in Japan and to explaining the contagious joy Saori gives to so many people. 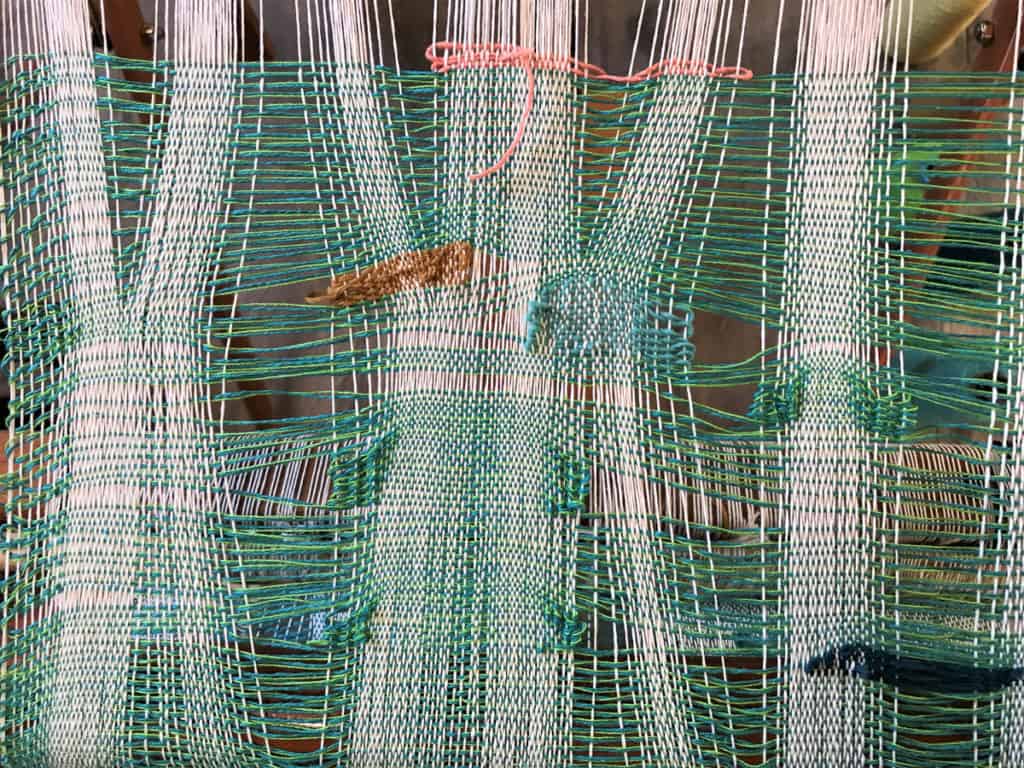 When I sit down to weave at a loom I am largely left to my own ideas but Kenzo will come to me now and again to throw in the unexpected, providing me with alternate ideas or showing me techniques to break down any inclination for symmetry and control I was settling in with. My partner also happily started weaving in the red/black sophistication of safety when Kenzo comes along with a fluro green waft to turn up the shock. Another time I was spinning what I thought was a highly irregular yarn in situ on the loom, but Kenzo realised that even my irregularity had become regular. He patiently explained that irregularity requires a real practice to maintain within such a structured process as handweaving.

One of the tenets of the Saori philosophy is to “consider the differences between machines and people”.  We are not machines we can weave in our own way. Weaving cloth is a highly mechanised and refined, industrial process and a free approach to weaving can get lost in this understanding. The Saori way of weaving ignites a free rather than structured way of working on a loom. For me, it loosened the cogs in my brain and I saw my loom as the creative tool it should be. 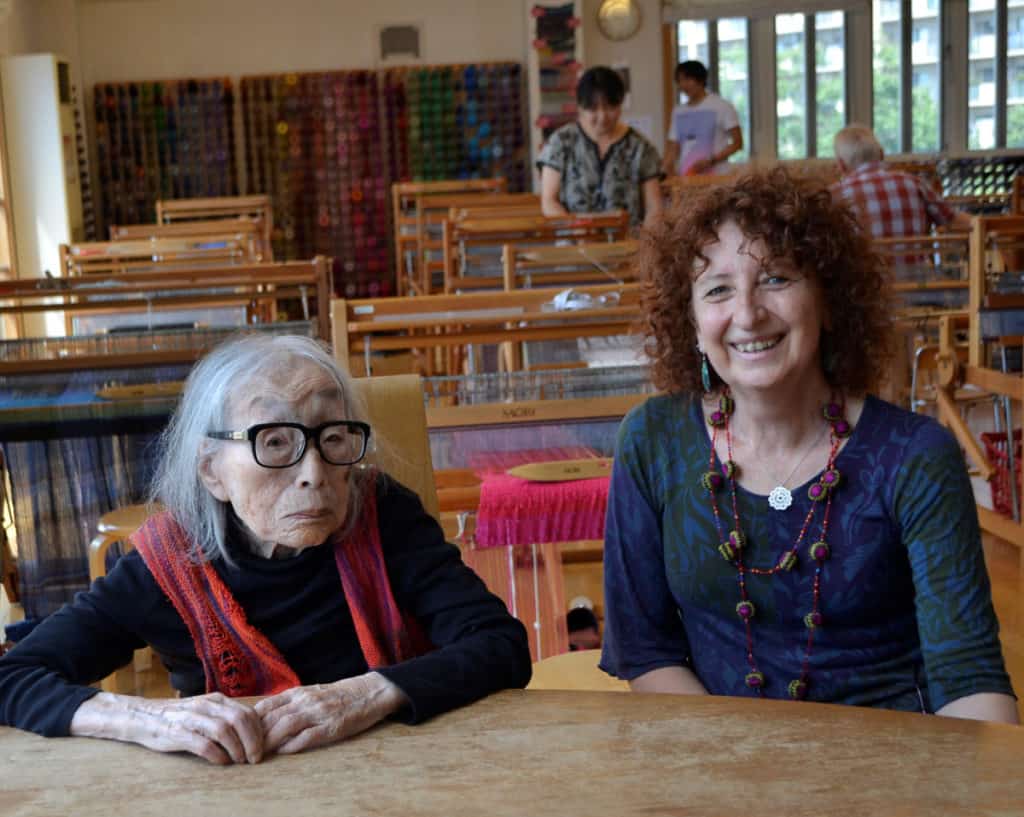 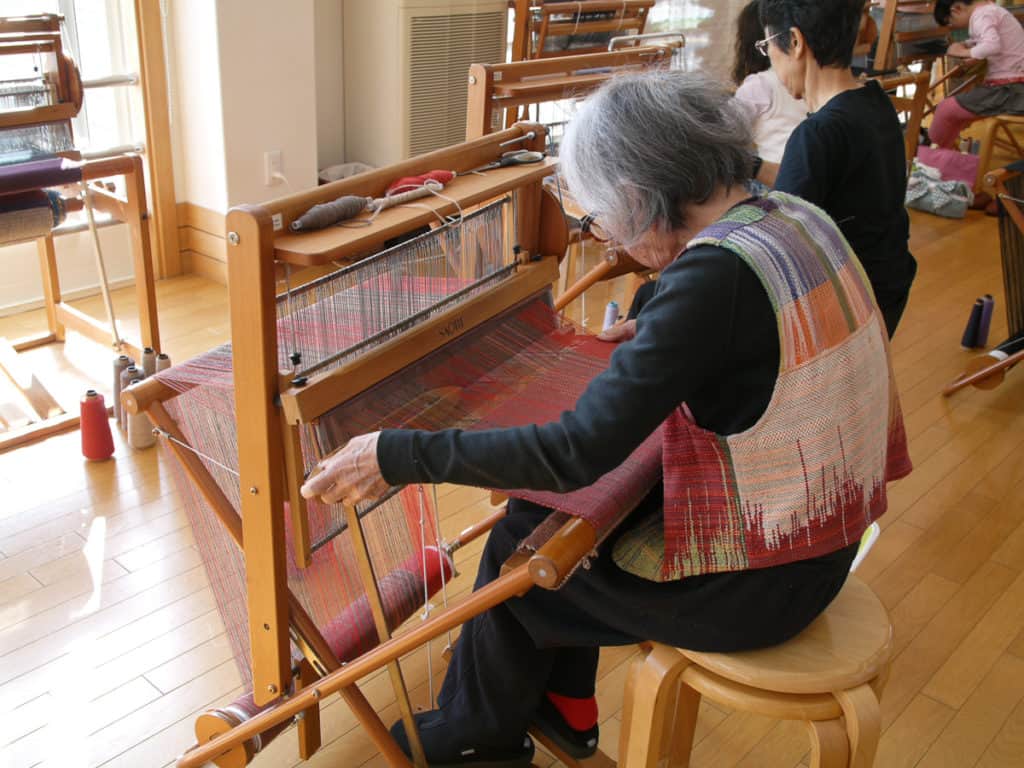 This fresh and compelling way of weaving was developed in Osaka by the late Misao Jo over 40 years ago. Misao was an un-conventional and driven Japanese woman. After a lifetime of teaching and practicing ikebana she sought to free herself and others from restrictive rules in embracing creativity and forming a personal relationship to her art.  Although this is not a new concept in itself she combined and built a meaningful philosophy and direction around it. She found this freedom in handweaving and taught her way to others. She mentored and inspired others to step away from conventional forms. Misao saw herself as a miner, finding jewels of creativity in everyone and guiding them to make it manifest in their unique handwoven cloth. 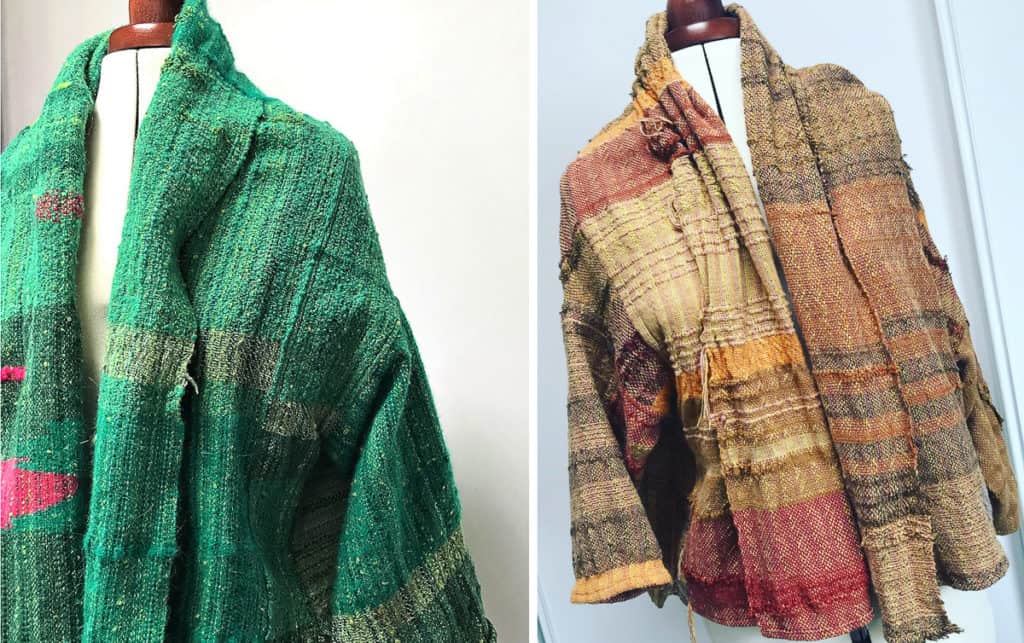 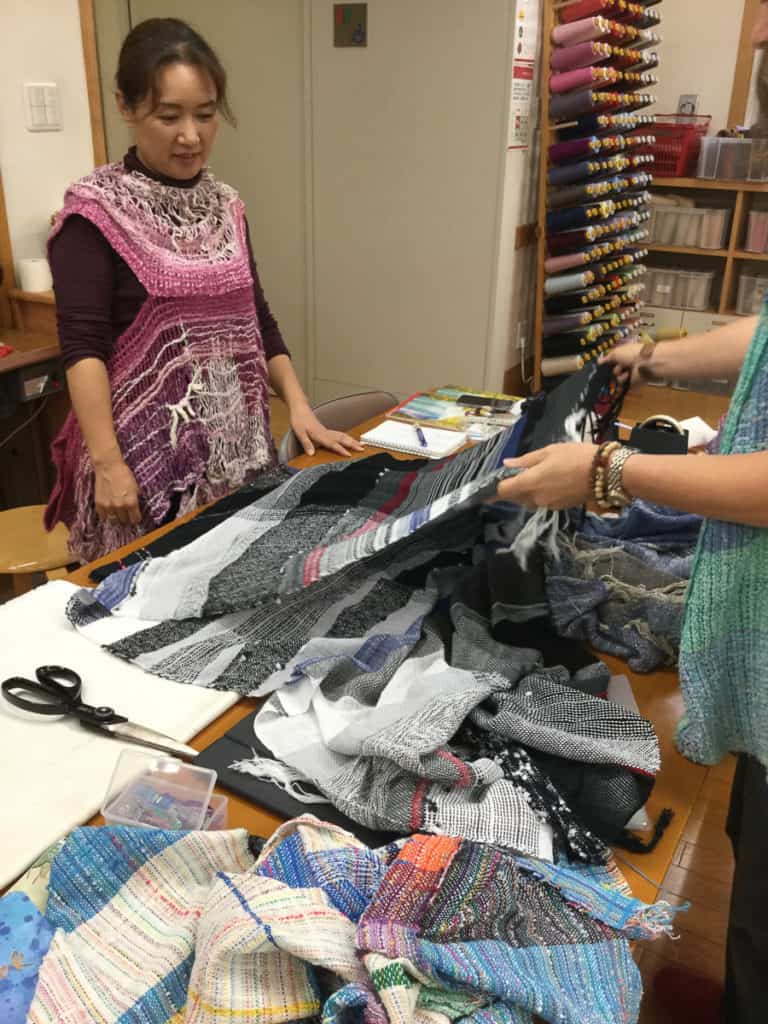 As I venture into the smaller rooms of the studio there’s a display of very unusual clothes.These clothes are the specialty of Saori weavers. Uniquely shaped in unexpected angles reminding me of the folds of origami and incorporating unconventional turns and textures. They are “western” in style rather than traditional Japanese, although aspects of traditional clothing are accepted such as narrower cloth widths used in kimono construction.  Narrow widths make interesting overall cloth. Weaving on the small floor looms can be quick and long lengths of fabric are produced. These are shaped into garments by direct draping methods similar to a sculptural process. The idea is to weave the cloth ignoring its claims to possible eventual use then working with artistic elements in the cloth to bring out its advantage in the final garment. I find that every step of the Saori way is built to encourage or even force me to creative problem solving and to push away from conservative, conventional choices. This is a liberating feeling. Many people, including myself, need this push to develop in this creative method. 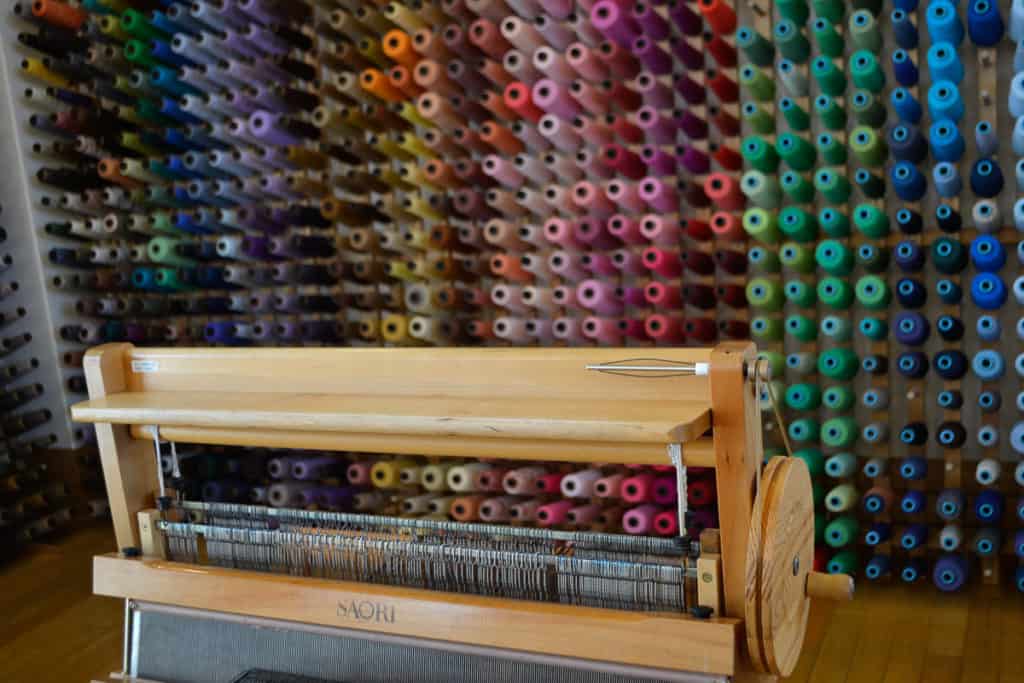 Another tenet of the Saori philosophy is to learn from others in the group. In the Osaka Saori no Mori studio we all weave together. Beginners, advanced and the in between are all together weaving to their own rhythm. Saori weaving encourages the uniqueness of the individual but it is not separated from the group.  It doesn’t deny its link to others in learning and developing our creative ideas. But the philosophy insists are all can weave artistic cloth that is utterly unique. This is its greatest point of difference to traditional weaving.

Japan is known for its highly skilled crafts. These crafts are outside the purview of most people as they are considered so specialised and difficult without extensive training. This has contributed to the popularity of Saori weaving which is seen as highly accessible for anyone and is now spreading throughout the world. Saori is a contemporary school and philosophy of handweaving influenced by Zen Buddhist thought and is still developing as it encounters other cultures.  It is great to see the beginning of something significant and positive, and I wonder what will emerge and continue as the philosophy invites a dedicated practice of weaving in a free way, our own way, but with others next to us. 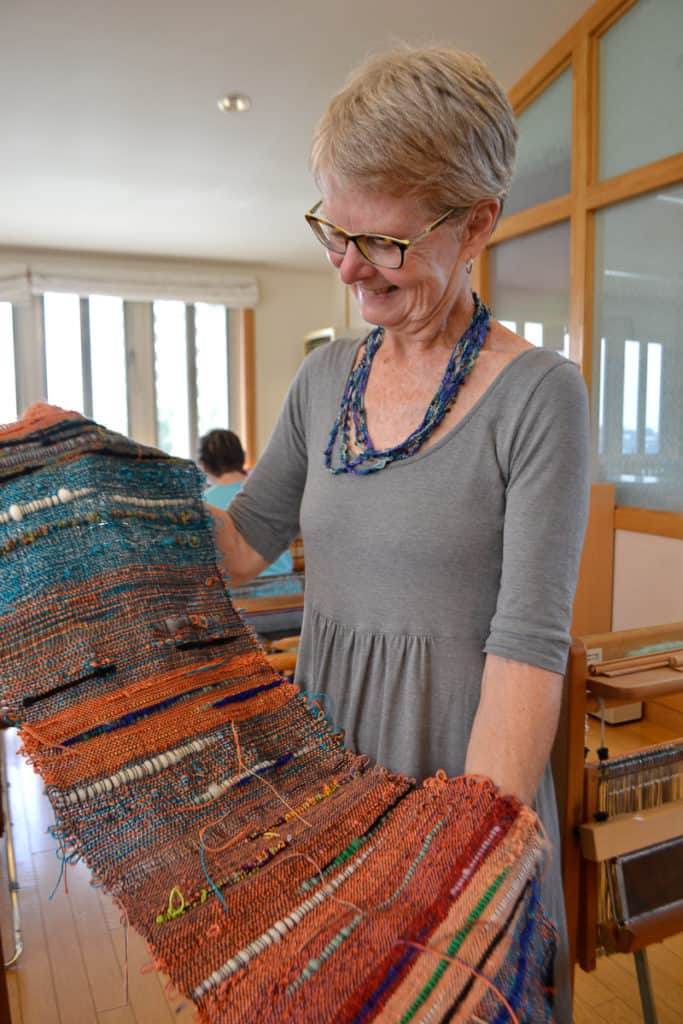 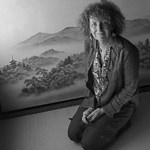 Kaz Madigan owns a Saori registered studio in Old Bar NSW Australia and regularly welcomes weavers to study and enjoy the Saori way of weaving cloth.  As a weaver for over 40 years the passion for the craft and its deep human connections has never diminished. Over the past 12 years the Saori way has become her way of art on the loom. You can find her voice at curiousweaver.id.au .  Kaz hosts specialised textile tours to Japan, including workshops at Saori no Mori, each year with Intentionally Different Travel, Canberra.

Earth Webs: Weaving into the land
Shyrdak: A sunny day in Kyrgyzstan
A decade of yarn bombing
走泥社のオブジェ焼き：京都からオーストラリアへ
Gallery VOICE-Ushida Collection
Wara art from Niigata to York: Japan-inspired hay sculptures 🇯🇵
Guildhouse, The Ghan and gumnut earrings
Up in a wool bag: Moving material in the Navajo Nation