Beyond the ethnographic turn: rethinking art and anthropology in Florianópolis, Brazil 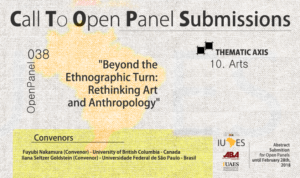 Many of the articles in Garland so far have engaged with anthropology, particularly in the latest Moana issue. But rather than a purely scientific study of culture, the stories involve creative responses to a personal understanding of cultural values and customs. This reflects an “ecological knowledge” that is one of the key themes in southern thinking, where social science is not seen as a simple extraction of knowledge from communities, but a partnership involving mutual respect and common interests. This upcoming conference in Brazil seems to reflect this trend.

The 18th International Union of Anthropological and Ethnological Sciences (IUAES) World Congress – Brazil will take place at the Federal University of Santa Catarina (UFSC) between July 16th to 20th, 2018. Our panel “Beyond the ethnographic turn: rethinking art and anthropology” welcomes submissions until February 28th, 2018.

Since the “Writing Culture” debate emerged in the 1980s, anthropology has questioned the ways of representing other cultures and societies, especially around the poetics and politics of ethnography. Following the debate, the relationship between art and anthropology was often framed around “the ethnographic turn”. In the recent years, however, alternative terms and ways of looking at the relationship between the two have been proposed. An increasing number of contemporary artists adopt ethnographic or anthropological approaches in their work, which might blur the classical division of such fields of knowledge production. Artists of non-Western origins or indigenous artists in particular are often expected to represent or at least reference the cultures of their birthplace to be recognized in the global art world. The expectation for contemporary art to be international has meant works and artists are often introduced and circulated far from their cultural origins. This panel reconsiders how anthropologists and curators today have become among the key translators of artistic and cultural products and those who produce them. The growing role of artist-curators, as well as the rise of indigenous curators, as examples of some who can have an intimate knowledge, and how their work affects our practices needs to be considered as well.

Language for paper presentations in this panel: English

A post-digital threat out of the labyrinth: Christus Nobrega review
A tactile collaboration from Brazil ✿ Ernesto Neto and Ibã Sales
Christus Nóbrega ✿ Remaking the past with lace
The spirit of Japanese mingei in Brazil