In June 2022 Garland featured Jesse Adams Stein’s book, Industrial Craft in Australia: Oral Histories of Creativity and Survival, including a podcast interview with Jesse. Kevin Murray was able to elicit her motivation for writing the book, clarify the meaning of some of her statements and ascertain the response of powerbrokers to her suggestions for improvement in Australia’s industrial sector. The book is worth a read; the podcast worth a listen. 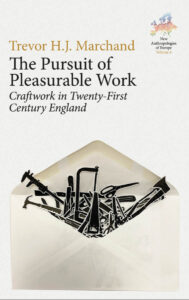 In the same vein, another book, focusing on a different part of world, joins the craft and design bookshelf, Trevor Marchand’s The Pursuit of Pleasurable Work: Craftwork in Twenty-First Century England (New York & Oxford: Berghahn Books, 2022). Whereas Jesse focuses on the training and presence of patternmakers, a formerly ubiquitous occupation in industrialised countries, Trevor looks at the trades of carpentry and joinery whose training and presence are similarly threatened. The approach of each is different but their conclusions are in sync.

Trevor was born in Canada where he trained as an architect. His work on building sites in and around Montreal prompted questions about how the carpenters and other tradesmen tacitly communicated and the methods by which novices acquired the skills necessary to survive and advance in their chosen trade. These interests led him to pursue social anthropology studies, eventually becoming a Professor at SOAS (School of Oriental and African Studies), University of London. His fieldwork, not surprisingly, was in construction whereby he was a labourer on a team of minaret builders in Yemen and a quasi-apprentice with local masons on mud houses in Mali. The articles and books (Minaret Building and Apprenticeship in Yemen, 2001; The Masons of Djenné, 2009) that resulted from Trevor’s research established him as a notable scholar in the field. He contends that “[t]raining alongside the craftspeople I study has been key to my discoveries about the ways we as humans learn and become enskilled (and deskilled)” (27).

After extensively documenting his Middle Eastern and African projects, Trevor determined that he needed a Western case study of craft training and practice as comparison. In 2005 he began a two-year accredited programme in architectural joinery and furniture making at the Building Crafts College (BCC) in London’s East End. At the same time as being a student, Trevor observed his surroundings and its occupants, methods of learning and communicating skills of craftsmanship, and the economic and social reality of making bespoke objects and a career devoted to that. He graduated with National Vocational Qualifications in wood occupations and a City & Guilds diploma in fine woodworking. Seven years later he returned to the BCC to conduct more fieldwork into the brain and hand connection to tools. He made video recordings and conducted interviews with first-year students and a selection of volunteer trainees. The result of his BCC sojourns is The Pursuit of Pleasurable Work.

The book is much more than the scrutiny of an education in making things. Along the way, Trevor reviews “the structural changes and resulting crises in British higher education that affected [him] as a university academic” (xv); the British craft renaissance; and the history of the carpentry trade and evolution of the British apprenticeship system. He considers gender identity, sexual orientation, “vocational migrants”—those leaving an established career in hopes of engaging in meaningful work—and age considerations in a manual profession. He applies an anthropologist’s curiosity and methodology to provide a rich picture of the environment and context he is studying.

In addition to black and white images of his fellow students—they were mostly fellows since only four females (10.5 per cent) appeared amongst those Trevor trained with and studied (127)—the latter chapters are rife with quotations from students, teachers, graduates and practitioners in the field. In the course of his two-year programme, during which the participants made a casement window, frame-and-panel door, staircase, and furniture including a chair, the reader is exposed to details of the manufacture of architectural joinery as well as how students coped with problems, interacted with instructors, became familiar with wood and tools, and responded to the workshop/instruction/colleagues.

As for Trevor Marchand’s focus on “pleasurable work”, he refers to William Morris’s essay, ‘Useful Work versus Useless Toil’ (1884). In it, Morris pondered the conundrum of what makes work worth doing. He stated that it is: “’the hope of pleasure in rest, the hope of pleasure in our using what it makes, and the hope of pleasure in our daily creative skill’” (20). In watching and listening to his woodworking colleagues, Trevor noticed that many articulated a perspective that aligned with Morris’s without knowing anything about him or the Arts and Crafts philosophy. And upon graduation, while they envisioned the pursuit of pleasurable work—“a unity of mind, body and spirit, an aesthetic integration of work with life and a harmonious balance between individual, community and the natural world” (205)—the post-scripts for Trevor’s cohort indicate the socio-economic and political reality for craftspeople generally.

The narrative is historically informative, provides a thorough overview for anyone interested in a woodwork career and is suitable for a general audience. My only criticism is that Trevor’s painstaking efforts to ensure that he doesn’t lose his reader, with reminders of what went before and what comes after in the text, can become irksome. However, given his comprehensive discourse, these asides go with the territory.

“…‘intellectual’ must be challenged and expanded to include, as a minimum, the skilled body at work and play”

To conclude and provide the philosophical link between The Pursuit of Pleasurable Work and Industrial Craft in Australia (and Garland), I quote Trevor Marchand’s heart-felt and enduring belief: “that skilled handwork be conferred greater status in all societies and that craft training be made an integral part of a rounded education that nurtures muscles, morals and mind. In order to advance in that direction, popular cultural definitions of ‘intelligence’ or ‘intellectual’ must be challenged and expanded to include, as a minimum, the skilled body at work and play” (31-32). With the Building Crafts College as a case study, this book ably demonstrates what advocates know about the pleasure, and pain, of craft. 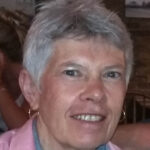 D Wood ✿ In quest of the well-crafted word
D Wood has combined writing about craft with a keen commitment to its making, including carpentry and needlework.

Queering the Subversive Stitch: Sew very masculine!
Craft Culture in Early Modern Japan: Learning by doing
Review of A Cultural Economic Analysis of Craft
The rise of "craftship": The Organization of Craft Work: Identities, Meanings, a...