In September 2021 I reviewed Hannah Kirshner’s Water, Wood and Wild Things: Learning Craft and Cultivation in a Japanese Mountain Town for Garland. That book describes Kirshner’s experience in Japan, inspired by a desire to learn about saké and extending to a range of other crafts that were practiced in the Ishikawa prefecture, specifically the town of Yamanaka. During Kirshner’s four years in Japan, on-and-off (2010s), she explored current practices, lamenting the loss of some and perpetuation of others.

By contrast, Christine Guth’s book, despite the word “modern” in her title, is dedicated to the years 1580s to 1860s. In Japanese history, this period is considered the early modern era, when the country gradually unified and was subsequently able to enjoy peace and its consequences: urban culture, economic stability and development of the arts. The resulting craft landscape was varied, rich and, thankfully, documented in text and art.

Guth begins her book with a description of a coincidental encounter during a trip to Japan in 2014. The purpose of her visit was to research sewing needles—their making, types, uses, users and ritual disposal. As she strolled in Kyoto, she noticed a tatami maker using a long curved needle to attach edging to a machine-made tatami mat. The chance meeting and her conversation with this and other craft practitioners in the twenty-first century made Guth realise that the networks surrounding Japanese crafts were more wide-ranging than she had assumed. Traditions extended through time and across practices and while many are depicted in archival material, some knowledge is tacit. For example, Japanese embroidery needles have round holes so that threads remain separate thereby reflecting light individually. This crucial information, responsible for Japanese kimonos’ shimmering quality, was not found in the historic records but acquired by Guth from a contemporary maker.

Craft Culture in Early Modern Japan, instead of a chronological structure, employs themes. Guth considers the natural resources for craft practice and their ecological maintenance; roles of professional artisans, including women, as depicted in woodblock prints; household and workshop systems surrounding the makers; transmission of skills and material knowledge; and adaptation to innovation and advancing technology. Lacquerware, sericulture, weaving, embroidery, papermaking, woodcarving and ceramics are some of the crafts represented. Guth believes that her “historical and relational” (10) methodology serves to place early modern Japanese craft in a sociocultural context rather than lending it the isolated esteem usually ascribed by Europeans and Americans.

The chapter on natural resources covers lacquer, metals (gold, silver, copper, iron), silk worms, clay, wood, and grasses (e.g. cotton, hemp, indigo). Artisans lived close to the materials they relied on and endeavoured to ensure their maintenance. Guth points out that the relationship was not always symbiotic, belying the myth that the Japanese love nature. The exploitation or preservation of resources was governed by social, economic and political factors that changed throughout the decades. 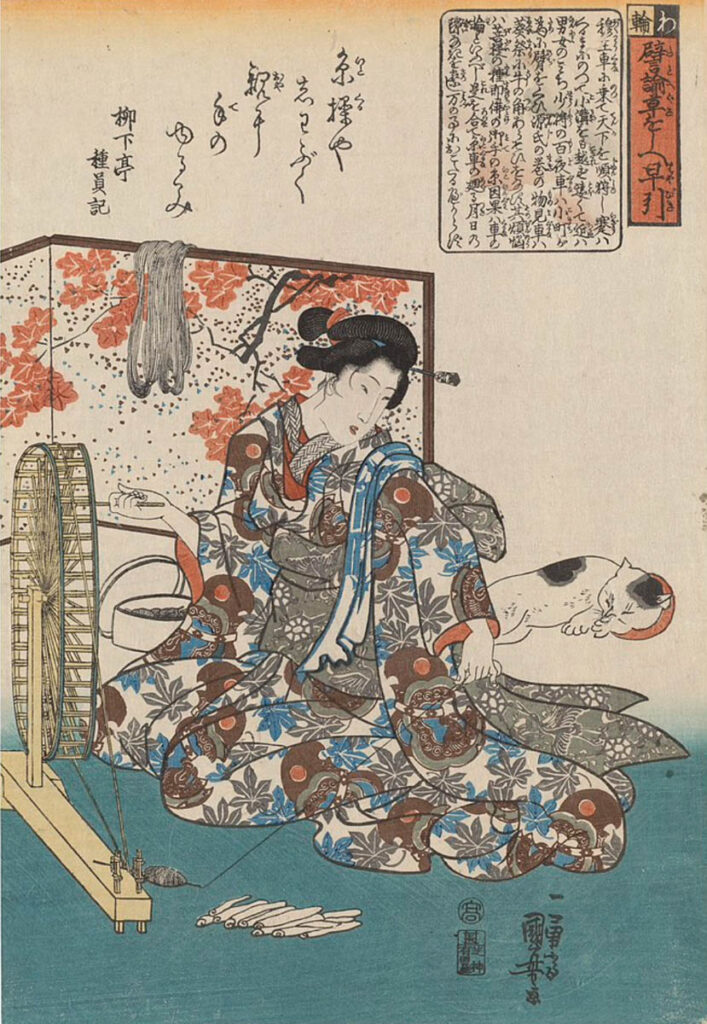 Chapter 2 addresses shokunin, a designation for professionals who make things by hand. According to Guth, the word had inclusions and exclusions, yet shokunin were the subject of considerable media attention. The fifty images published herein not only illustrate Guth’s narrative but were critical in their time for disseminating information about craft practitioners, what they made and how. The existence of woodblock-printed books and single sheets depicting activities such as fabric dying, braid and fan making, and woodturning helped establish the social stature of craftspeople. During the early modern period images circulated in libraries and since depictions of some practices were not updated over time, notions about techniques and their evolution were sometimes stuck in the past whereas, in reality, practices evolved.

Artisanry was dominated by men. Women’s primary roles, as laid out in Treasury of Greater Learning for Women (1716) were domestic arts, including spinning, sewing, and weaving, that were necessary components of wifely duties. Yet additional craft practices are described in Treasury that revise accepted wisdom about women’s nondomestic pastimes. As part of textile dying, for instance, women tied small bundles in cloth to create kanoko shibori, a circular-shaped pattern that occurred when the tied area resisted colour.  Papermaking and raising silkworms were female activities, particularly in rural areas, but whereas women’s contributions to family production and income were acknowledged privately, public recognition was not forthcoming except in “prescriptive literature or woodblock prints in which they are little more than a genre of beautiful women (bijin) performing craft work” (81, 84).

Craft workshops, detailed in Chapter 3, were organised along familial lines. The head of the household (ie) was the authority and lineage fell to the eldest son; second sons often left to set up their own workshops. In rural areas, ie production was undertaken by the senior husband, his wife, children and extended family who often maintained a farm as well. Urban craft workshops, on the other hand, clustered together to access resources and collaborate on different aspects of the same craft, like ceramics production vis-à-vis decoration.

Lacquer, identified by Guth as “a material of exceptional social, cultural and economic importance in early modern crafts” (15) is the major focus of Chapter 3. The lacquer workshops of Kōami Nagasuku and Ogawa Haritsu are detailed. The Kōami ie enjoyed patronage by military rulers for more than twelve generations, making exquisite wares called mackie that were symbols of power and status because of their lacquer and gold content.  Nagasuku compiled biographies of those generations as an indication of the history and accomplishments of the family, and admonished his successors: “’You must never forget that when it comes to sprinkled designs we are the best. But do not boast, not even a little. In our profession of lacquer and sprinkled designs there is no one in all Japan whom you need fear’” (125). The Kōami family did not sell its goods in the marketplace whereas Ogawa Haritsu earned his reputation through social networking. His work was known for use of unusual materials and trompe l’oeil effects. Images of Haritsu’s writing boxes show the incorporation of crushed mother-of-pearl, ivory, gold and silver and, because he was an independent craftsman, he could be innovative, taking lacquerware forms, materials and designs in new directions.

Chapter 4 considers tacit knowledge, the “language, gestures and behavioral patterns” (139) that were instilled by a master in his apprentice. The importance of observation and learning by doing was universal as was thorough knowledge of the materials of one’s craft. Secrets were kept within practices such as Tōkō hitsuyō (Essentials for the potter: 1737), a hand-written manual of techniques passed from father to son including decoration with under- and over-glaze enamels (161). The penultimate chapter reviews technologies that came to Japan from other parts of Asia and Europe. The Korean climbing kiln, for example, was adopted initially in Karatsu, a stoneware centre, between 1600 and 1630 (168) and later built elsewhere. These multi-chamber kilns were stoked individually and vented into each other creating higher temperatures and permitting a larger quantity of items per firing. Printed books from abroad also informed Japanese craft practice. Imported technologies improved the efficient and efficacious creation of Japanese-crafted products, heightened their quality and perpetuated their uniqueness.

Guth concludes her book: “Taking into account these multifaceted considerations makes us more aware of the remarkable resourcefulness, resiliency, skill, ingenuity, and creativity of early modern craft makers” (195). Craft Culture in Early Modern Japan and Water, Wood and Wild Things are ideal shelf companions, both demonstrating the stature and longevity of Japanese traditions in craft.