From Aotearoa to Uzbekistan: New Zealand in the Zar Festival of Gold, Bukhara 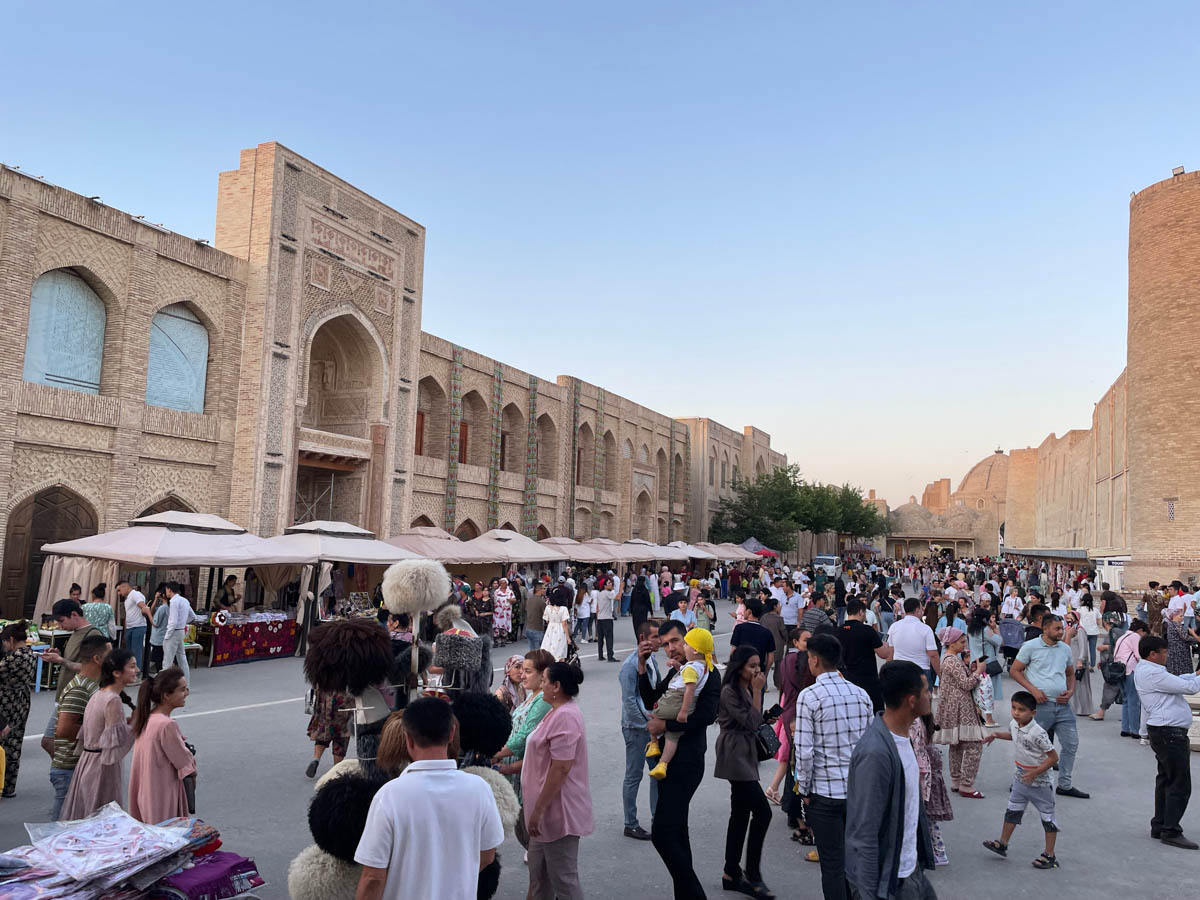 Finn McCahon-Jones feels the vibe from New Zealand makers who participated in an epic celebration of opulence in Central Asia.

In May 2022 Bukhara, Uzbekistan became the backdrop to the first ‘Festival of International Gold Embroidery and Jewellery’ known locally as the Zar Festival, which is to become a biennial event. From all over the globe, jewellers, textile artists and embroiderers were invited to represent their regions. It was promoted by the World Crafts Council and funded by the Uzbekistan Government. A total of 105 countries were given booths to showcase creative excellence from their countries.

As well as showcasing embroidery and jewellery from around the world, the festival organisers placed importance on the scientific and practical side of making – arranging competitions and demonstrations to promote the tacit and social elements of craft, as well as the completed object. 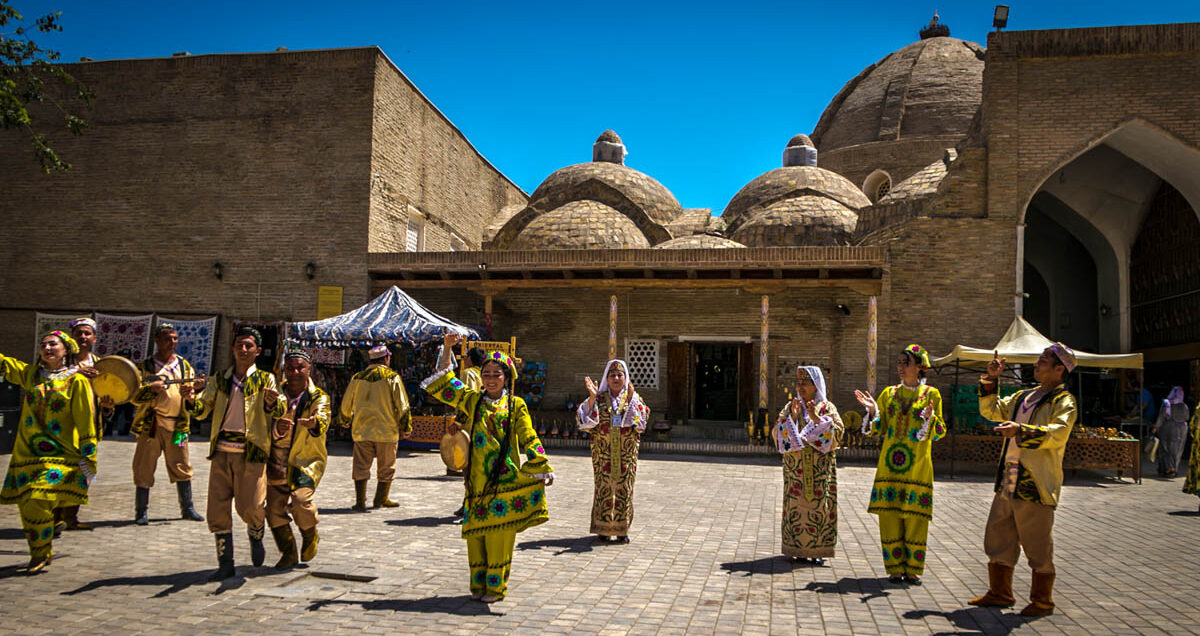 Street Performers, Bukhara. Image, Serena StevensonThe biennial festival is the initiative of Mr Shavkat Mirziyoyev, President of the Republic of Uzbekistan. Mirziyoyev believes that special honour should be paid to artists and artisans, as he sees the work of artists as what ultimately shapes the culture, mentality and values of the cities we live in. He sees he has a duty to promote ancient crafts, especially in the face of pervasive global culture and mass production.

In 2019 Mirziyoyev also initiated the First International Festival of Handicrafters, in Kokand. The president’s opening speech outlined his passion for the crafts:

“… In order to breathe life to an ordinary clay, piece of metal or wood, make the unmatched and refined items out of them, there will be needed not only a scrupulous work, but also the warmth of human soul. It is very important to have a delicate flair and mastery, enormous patience, and most significantly, the love and devotion to one’s craft and full commitment…”

“It was so affirming to be in a place that understands craft” speaking with New Zealand jeweller Joanna Campbell she flowed with enthusiasm for the festival. “Trade, culture and craft started in these cities … you could feel a reverence for makers and craft in the streets.”

The festival was set in the heart of the old quarter of Bukhara, a city which has been an important centre for religion, philosophy and applied arts for centuries. Talking to Joanna Campbell in June 2022 she reported that “The feeling of the city … was like nothing I have felt before … It has been a city for 2700 years, it felt like everyone had sussed out how to live together, it was peaceful and harmonious.” 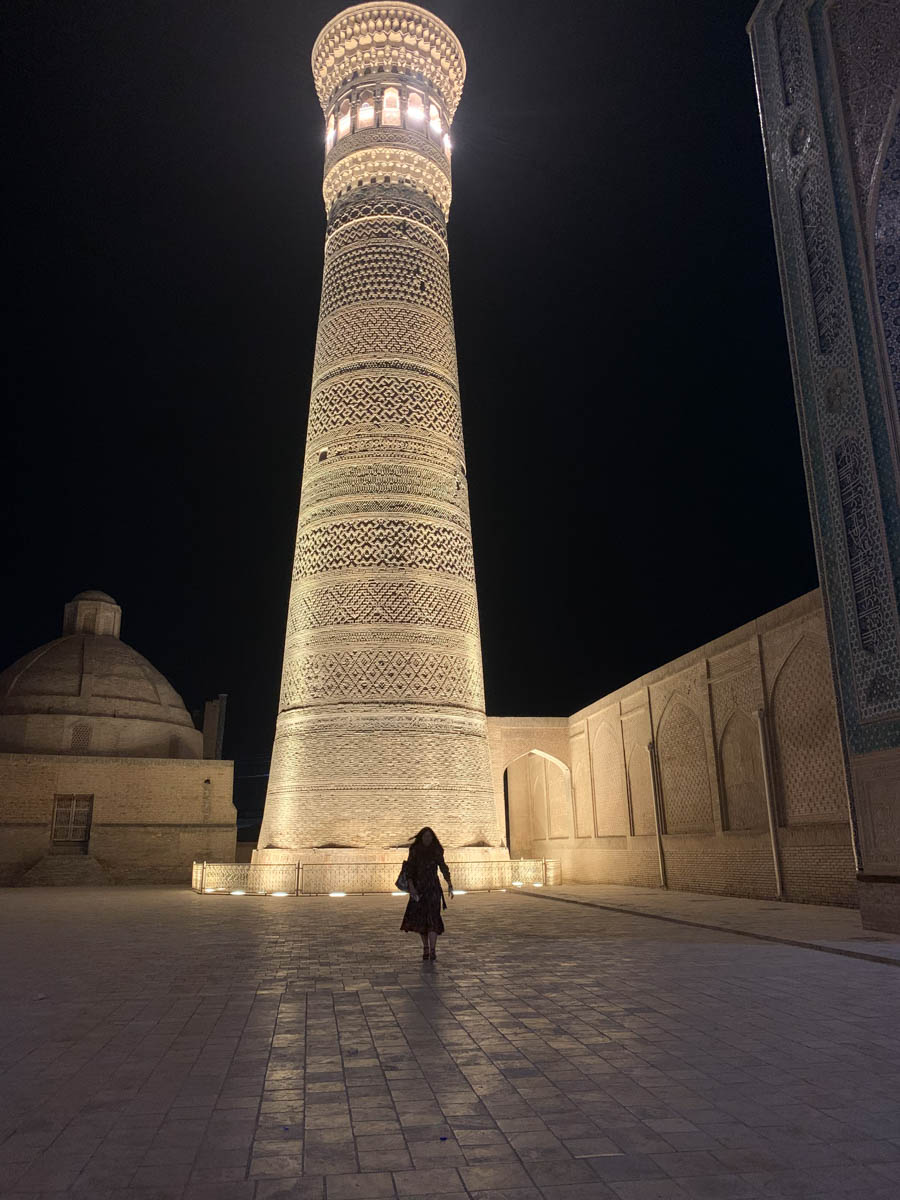 I asked her what caught her eye in Bukhara, “textiles, textiles, textiles. And the Kalyan Minaret. I cried standing in front of the minaret.” The minaret is the most prominent structure in the city, designed to call Muslims to prayer. “The brick, the pattern, the texture, was a baseline thing in the city.” Campbell found the texture of the city to be liberating, if not also overwhelming. The structure of the city was expressed through materials and construction. The city was a texture on texture, there was evidence of time everywhere.

There was something about being in an ancient city that operated in the time of the ancient silk road, bringing information and objects from the East to the West. The language of the street was imbued with secrets from the past – mulberry silk trees lined the roads, delicate faience tiles proliferated over the buildings and in the middle of it all sat the festival. This richness of culture made all the artists feel welcome.

The Festival took place on the main street of the old quarter, surrounded by mosques and ancient brick architecture. The street was lined with tents, each containing a different country. Joanna Campbell explains the setup:

“Our tent was in front of The Arc, part of the old walled city. Our tent had a beautiful glass display case where I had some of my work. Rowan Panther had a big piece in there too. Jo Dixey displayed her gold work up around us on the walls. Layla had made big posters that showed our names and our works too. I’m not sure how the order of the tents was set up. We were down one end of the street and Australia was at the other end. Across from us was a team of archaeologists that happened to be doing a dig… the days were 35 degrees and we took turns manning the tent, like a tag team… One day Rowan and I went for a walk and found the old bizarre, where we bought heavily embroidered silk jackets. Here we were on the silk road, buying silk jackets. It was a dream come true.” 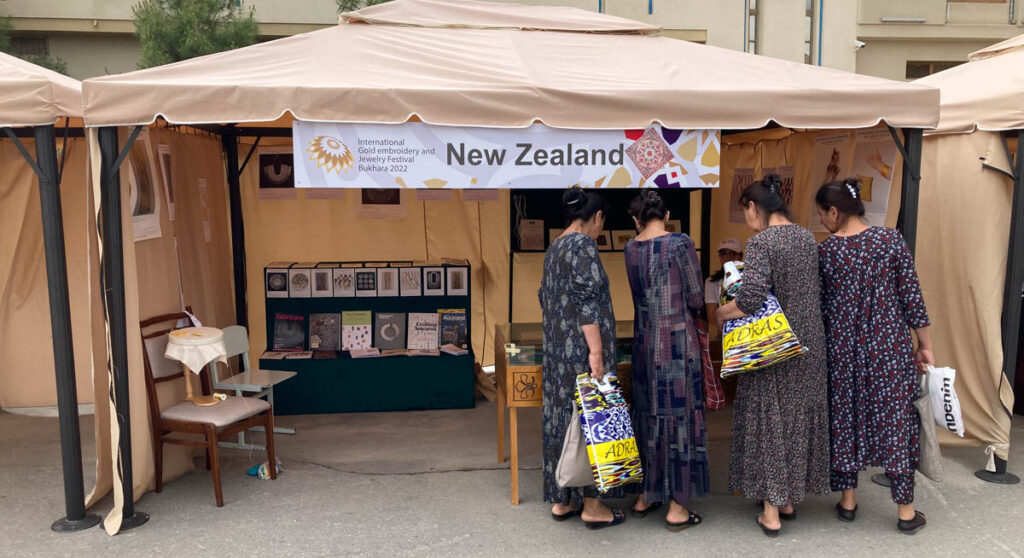 From the perspective of the attendees, the festival felt more like a trade show, rather than a symposium. People would constantly ask how much the works were and were slightly confused when they found out the works were displays rather than a shop. Campbell said she felt a real hierarchy of crafts. The locals were not so interested in contemporary crafts and the conceptual use of materials, they preferred classic pieces like necklaces, bangles and earrings, made in gold. However, there was a strong interest and much positive feedback about the contemporary work, especially in terms of the craftsmanship and technique, But they were puzzled why, after so much effort, the works were not made in gold. 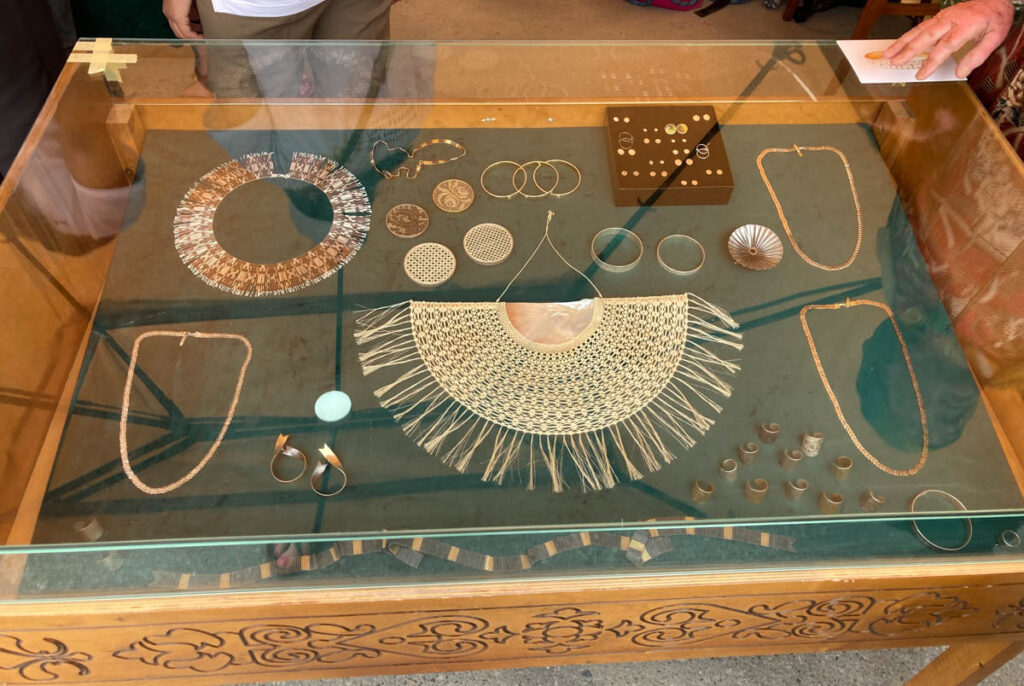 Rowan Panther exhibited a large lace-work chest piece made from muka flax fibre and mother-of-pearl. Joanna Campbell displayed a large fringe-piece necklace and ribbons made from silver chenier, as well as a selection of rings, earrings and brooches, made in silver and copper. Jo Dixey, classically trained at the Royal School of Needlework, presented a series of stylised figures executed in different goldwork techniques. Dixey also spent time showing visitors her embroidery techniques. As well as the artists’ work, a small library of books on New Zealand craft and jewellery practice was available to browse. 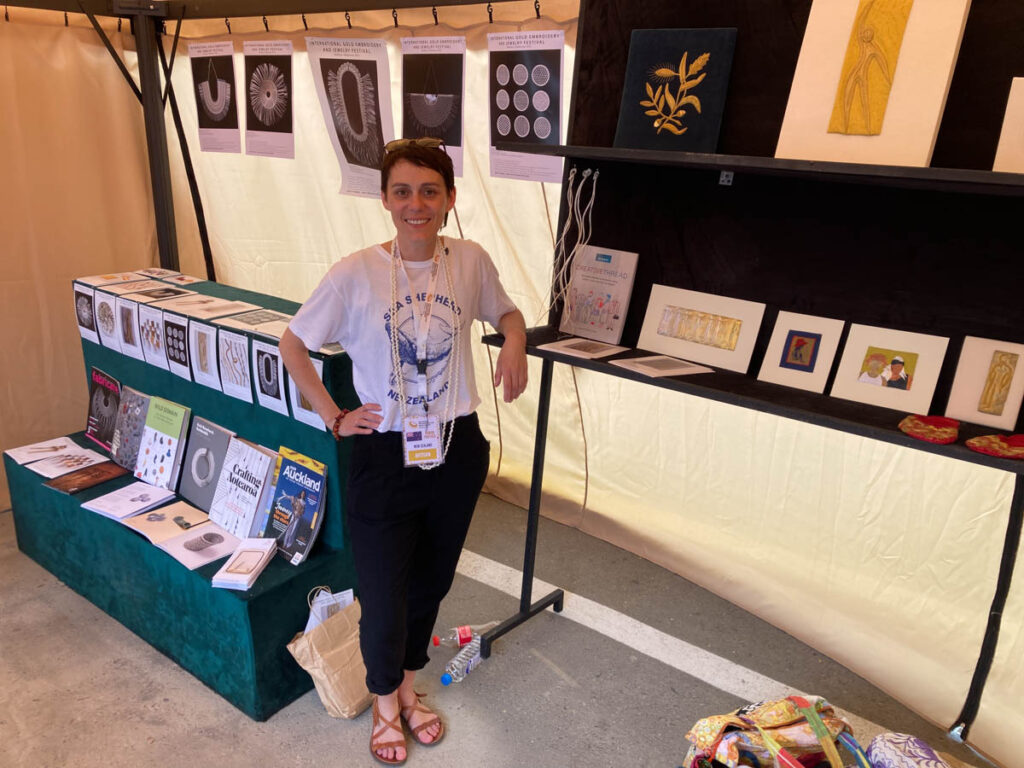 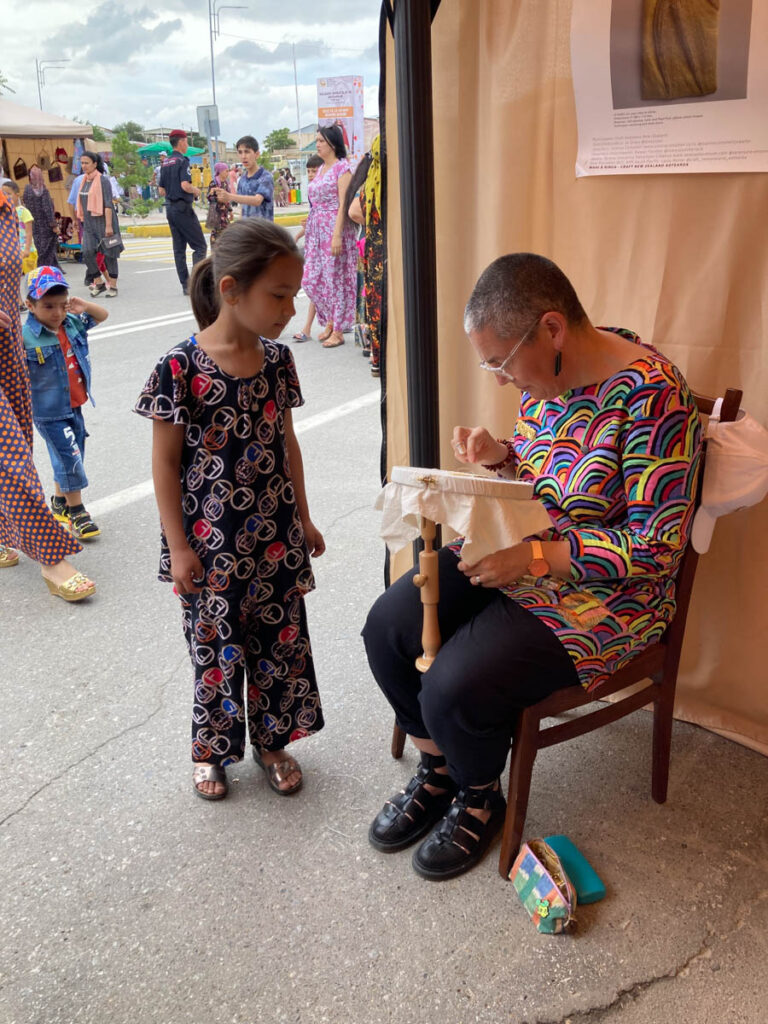 Representing Australia, Sultana Shamshi, displayed a number of conceptual pieces of jewellery. This included a contemporary neckpiece made from sliced nuts, which appear like wooden filagree. Alison Cole, a full-time embroiderer, displayed examples of her goldwork embroidery as well as demonstrations to passers-by.

During the celebrations, Alison Cole was awarded second place for Best Gold Embroidery Organisation by the Festival organisers.

Cole’s enthusiasm for the festival is captured in a podcast interview where she speaks with all the energy of a tourist reciting her experience. Top on her list was a visit to the Malika Sultan Embroidery and Handicraft Centre where Cole and Jo Dixey worked alongside local embroiderers on a piece of traditional goldwork. But most of all, Cole expressed how much she enjoyed seeing gold embroidery as part of daily attire on the street.

Alison Cole, Layla Walter and Joanna Campbell all reported they felt a certain freedom that comes with a place that has such a deep-rooted history in the crafts. They experienced a sort of everyday opulence, couched deep in the culture where pattern, design and the richness of craft were a seamless part of everyday life. I guess what they saw was reflected in the President’s speech about understanding art as an entangled part of the soul of a place.

“It was a crazy learning experience and a big personal journey…” Joanna Campbell said “Bukhara has given me a sort of permission to not be uptight. There, everyone just expressed themselves, just doing what they wanted to do. In Bukhara, pattern and colour were fundamental and celebrated.”

Perhaps it is a reflection on how jewellery and the crafts in New Zealand are heavily influenced by the rigours of European modernism, which only saw one end of the silk road. Here they were standing in the middle of it awash with the flow of many cultures. Whatever their experience, all the artists have come back invigorated and ready to push their practices; and their only regret is not being able to be everywhere at the festival at once. 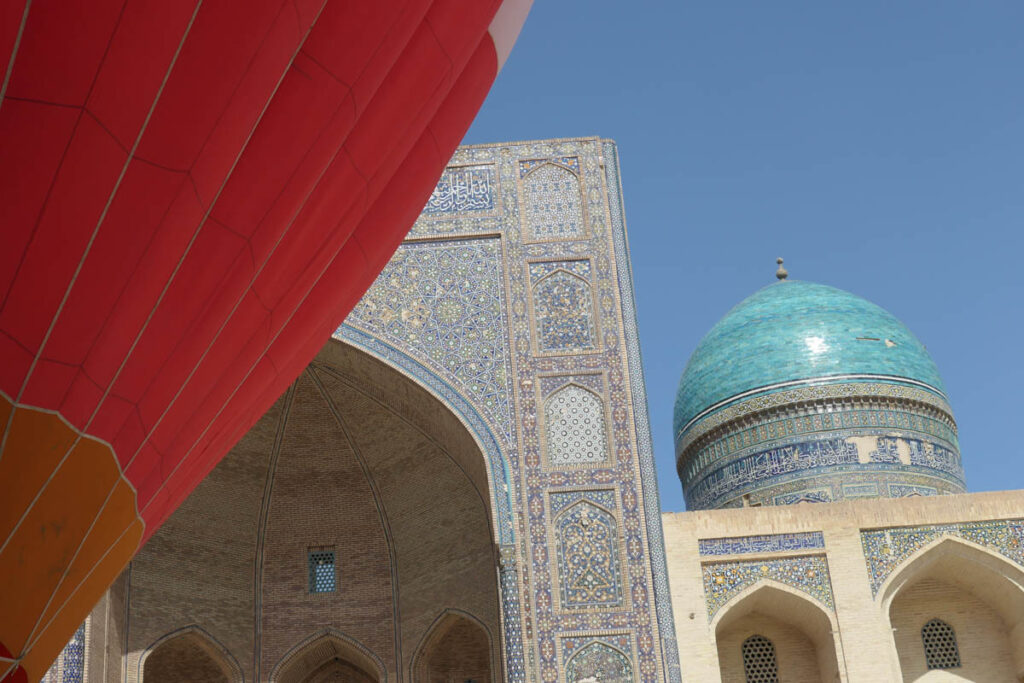 Festival of International Gold Embroidery and Jewellery, Bukhara, Uzbekistan was 21-25 May 2022

Finn McCahon-Jones is an independent curator and artist based in Auckland, New Zealand. His interests lie in the intersection between fine arts and the applied arts, and the importance of tacit knowledge. Finn has worked in the museum sector for over 18 years, including curator at Auckland Museum and as director of Te Toi Uku: Clayworks Museum, Auckland. Finn also exhibits regularly under the pseudonym Finn Ferrier.