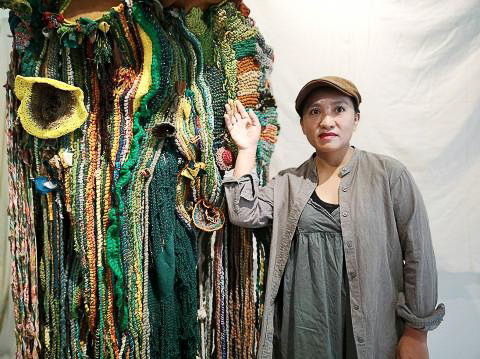 Paiwanese artist Aruwai Kaumakan is reviving the snake motif in her textiles for the upcoming Taipei Biennial.

In the summer of 2009, Typhoon Morakot tore through central and southern Taiwan, burying villages and taking hundreds of lives. Many indigenous communities were forced to relocate from the remote mountain villages they had called home for hundreds of years. More than a decade on, the recovery from this tragedy is still ongoing. But some Indigenous creators, like the Paiwan artist Aruwai Kaumakan, have found in its aftermath a renewed sense of community and the traditional art forms that power it.

The 2020 edition of the Taipei Biennial will build on the 2018 event, which re-imagined the Taipei Fine Arts Museum as an ecosystem in order to explore the “entanglement of humans and non-humans” on our planet. The 2020 exhibition will attempt to define the “earthly conditions of living in a space that is finite, sensitive, fragile, limited” – the end point being a hopeful new definition of the Earth, “one that can be called the terrestrial”.

Perhaps no artist set to participate in the exhibition is better positioned to answer the challenges of the brief than Aruwai. The typhoon is recent history, but her Paiwan ancestors have surely weathered more of those finite, fragile and space-limited terrestrial conditions than most people. In the Paiwanese collective consciousness, founding myths of great inland migrations meet the dramatic upheaval of the colonial period.

Aruwai, a former jewellery maker, was inspired to revive the art of Paiwan traditional weaving following a dream vision from her ancestors in the aftermath of the typhoon. Her work calls on traditional totems and ornate scrollwork to help her craft the story of her home and her people. Traditionally, it is the Paiwanese women who are known for the practice and passing-down of their people’s art. Aruwai’s mother and grandmother served as her mentors. Her mother is particularly skilled at “taking apart traditional textiles and reassembling them into new creations,” which inspired Aruwai to “weave her creations using recycled cloth and other everyday fabrics”.

Aruwai’s recent work employs traditional motifs of Paiwanese culture, such as imagery of swirling river water, and black slate tiles of Paiwan houses. Motifs in Paiwan art, used primarily to record family histories, can stand as historical testaments to the myths and legends of their village. In a culture without a traditional writing system, the importance of carved motifs in chronicling the floods, great migrations, wars and other identity-forming moments can’t be understated. 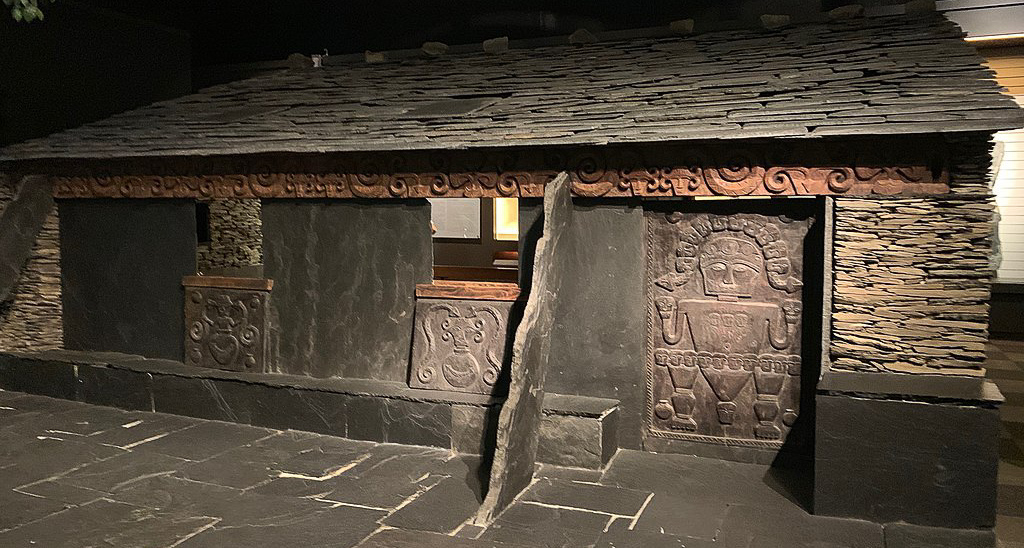 No motif is more central to Paiwan culture than that of the Deinagkistrodon acutus viper, which is endemic to the environs they call home. For some Paiwan communities, the snake serves as their spiritual protector, embodying the virtues of bravery and strength. For other communities, the snake is said to have descended from above to birth one of their first ancestors. Whatever the case, the viper figures as a central motif in all aspects of Paiwanese life. Fieldwork undertaken by Hueiyun Chen explores the sanctity of the snake and the way it binds together other motifs, like those evoked by Aruwai in her recent exhibition. Hueiyun recounts how the Paiwanese people he spoke to viewed an old slate house as the viper’s body itself. He cites the artist Sakuliu Pavavaljung, who writes:

Traditionally, the slate houses were built on the sides of the hills on the natural terraced fields following the course of the river. As the river meanders down the hill, it resembles a snake slithering downwards. As the houses follow the meandering shape of the river, they also resemble the slithering of a snake down the hill. The resemblance is further enhanced by the slate tiles on the roofs of the houses, as they look like the scales on the snake body…As the houses follow the meandering of the river, the image created is one of a moving snake slithering down a hill.

Aruwai now works collaboratively with her community, “using weaving as a resilient and social fabric”. The daughter of her village’s chieftain, she perhaps feels more responsible than most for ensuring the craft of her ancestors is passed down to the next generation. Traditionally in Paiwan society, the aristocratic or mamazangilan class developed the most ornate sophisticated weaving skills, owing to their extra leisure time:

“An artist needs to know where she comes from and where she is going for her creations to soar,” Aruwai said in a recent interview. “More than a scion to an aristocratic line, I see myself as a torchbearer of my culture, which I embrace through creativity.

Those meandering slate houses that Sakuliu spoke of, re-imagined as the moving body of a sacred snake, ceased to exist after the Japanese colonial period. Finite, fragile and beautiful, the slithering, ever-shifting mountains of the Paiwan people exemplify those earthly spaces under the microscope of the upcoming Taipei Biennial.