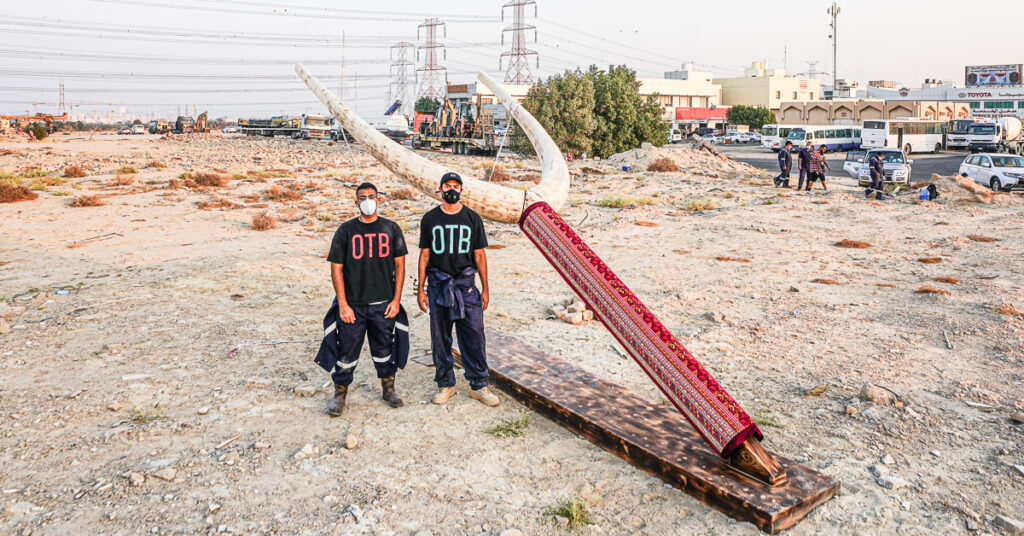 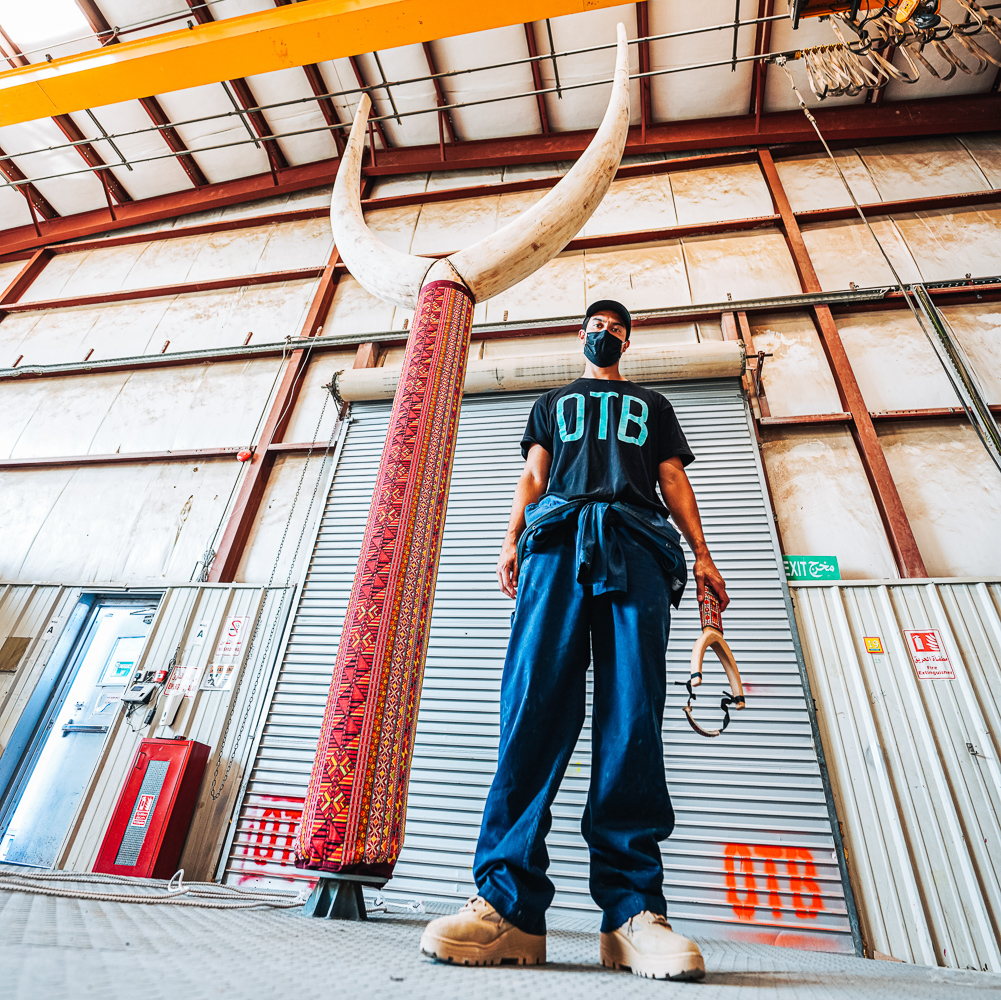 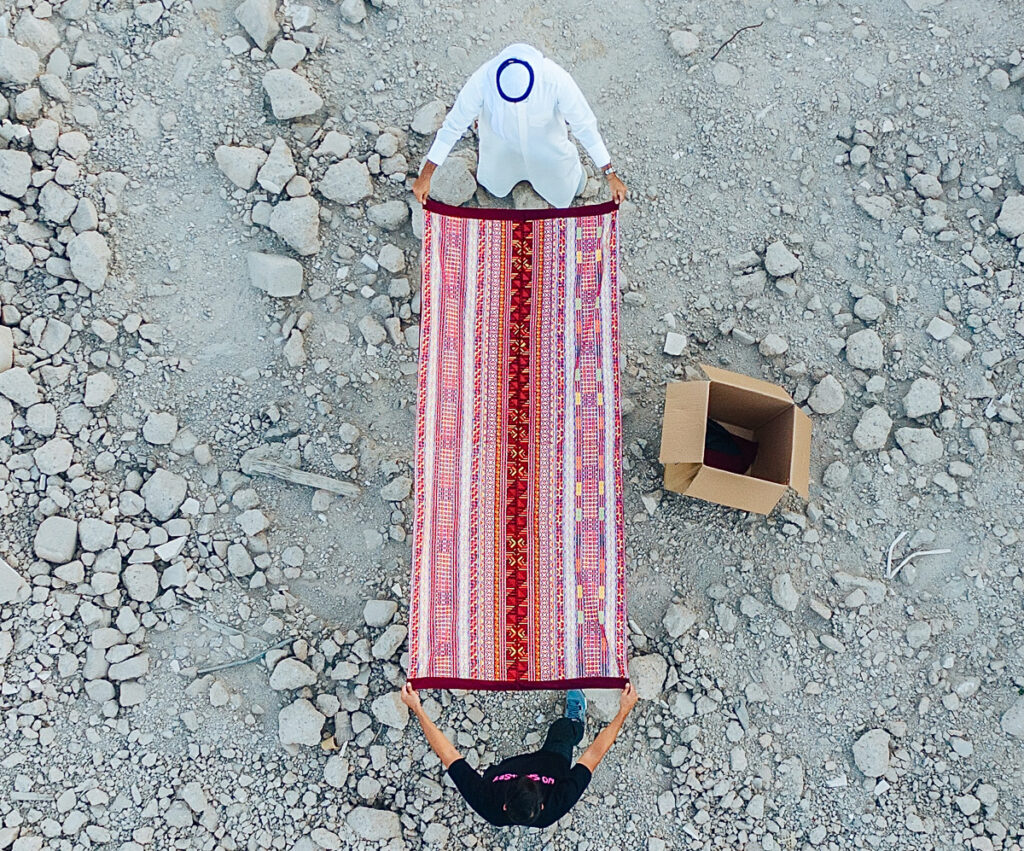 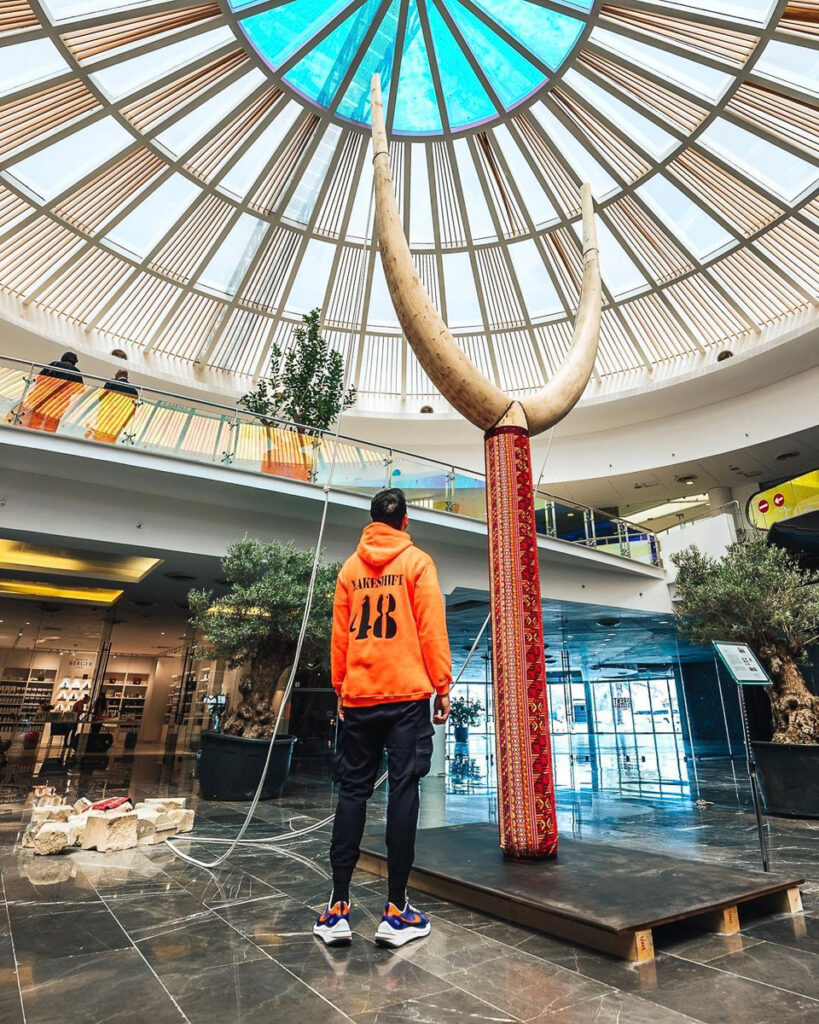 A giant slingshot is adorned with Palestinian embroidery as a monument to a culture that survives despite the odds.

Tareq Qaddumi is what we call now an “influencer”. He operates within the social media sphere to develop and promote projects. His Instagram account @kickstq has more than 100,000 followers, where it airs issues relevant to Arab youths, as well as his love of sneakers. One of his memes, “#NoSkillSet”, reflects the fluidity of a generation that floats in the infosphere.

Tareq also happens to be the grandson of Dr Ghada, who tragically passed away earlier this year due to COVID, leaving the World Crafts Council in the hands of her son, Sa’ad, Tareq’s father. Dr Ghada and Tareq seem to be more than two generations apart. Yet their interests meet in a recent project that marries Tareq’s attitude with heritage crafts.

Tareq grew up with stories of his grandparent’s Palestinian homeland.

“I would always hear stories about Palestine. How she had to leave with her family during the Naqba in 1948. I always had this urge to create awareness about this experience. Back in 2018, I woke up one morning, after sitting with grandmother and reading up on resistance. In my imagination was this gigantic slingshot wrapped in embroidery.”

Tareq asked his grandmother where he could source embroidery for such a project. They met with Ms Siham Abu Ghazaleh who helped connect them with a Palestinian refugee camp in Jordan that specialises in embroidery, run by the Women’s Union of Palestine in Jordan. They first made a small prototype, which received an overwhelming reception. Clearly, there was interest in something more.

Next Tareq pitched the task of creating the giant slingshot structure to one of his friendsds, Dawood Al Awadh. They formed the team Makeshift 48. 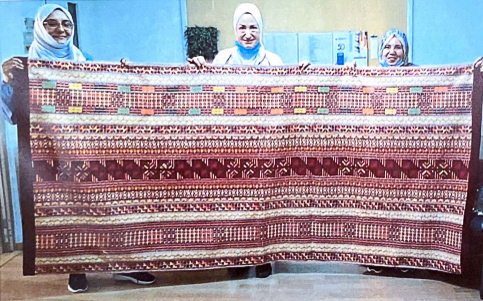 “Palestinian embroidery has always fascinated me. The more I researched the art, the more inspired I became to work on a project that showcased its beautiful craftsmanship.”

“Muqla’a” “Slingshot” was exhibited outside Contemporary Art Platform in Kuwait as part of a group exhibition, Between the Walls: Art of Resistance. It was also made into a video that has been widely shared on Instagram. 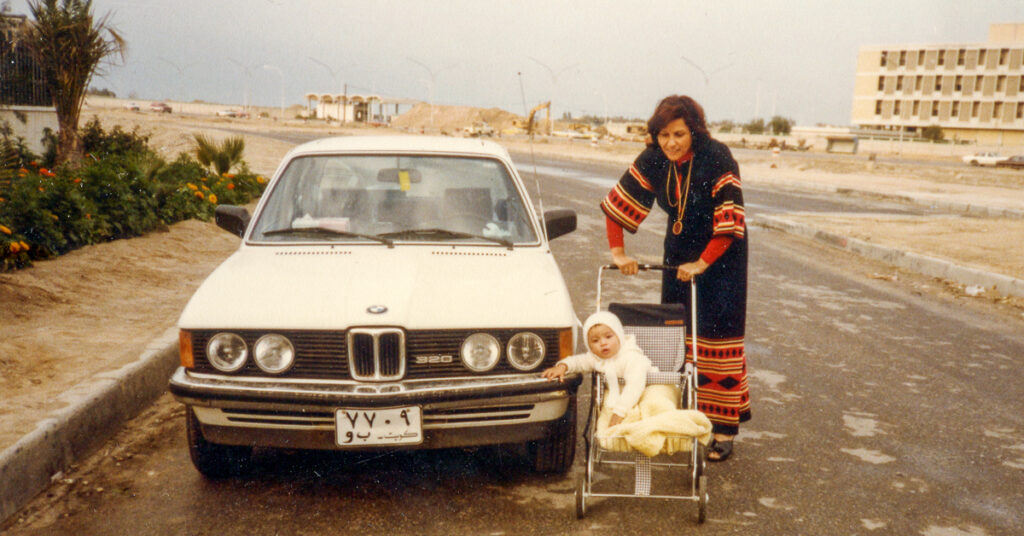 In a way, the grandson’s current work is an echo of Dr Ghada’s “orange knife”. Tareq remembers this well and would like to make this story the focus of a future artwork. 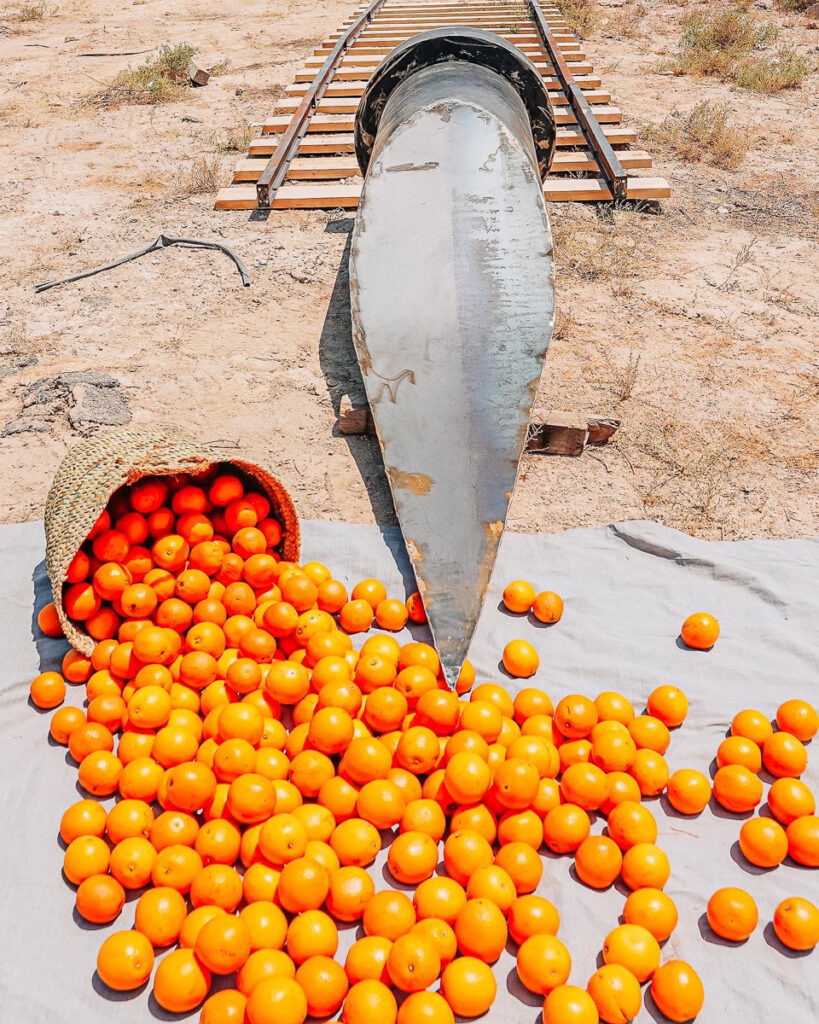 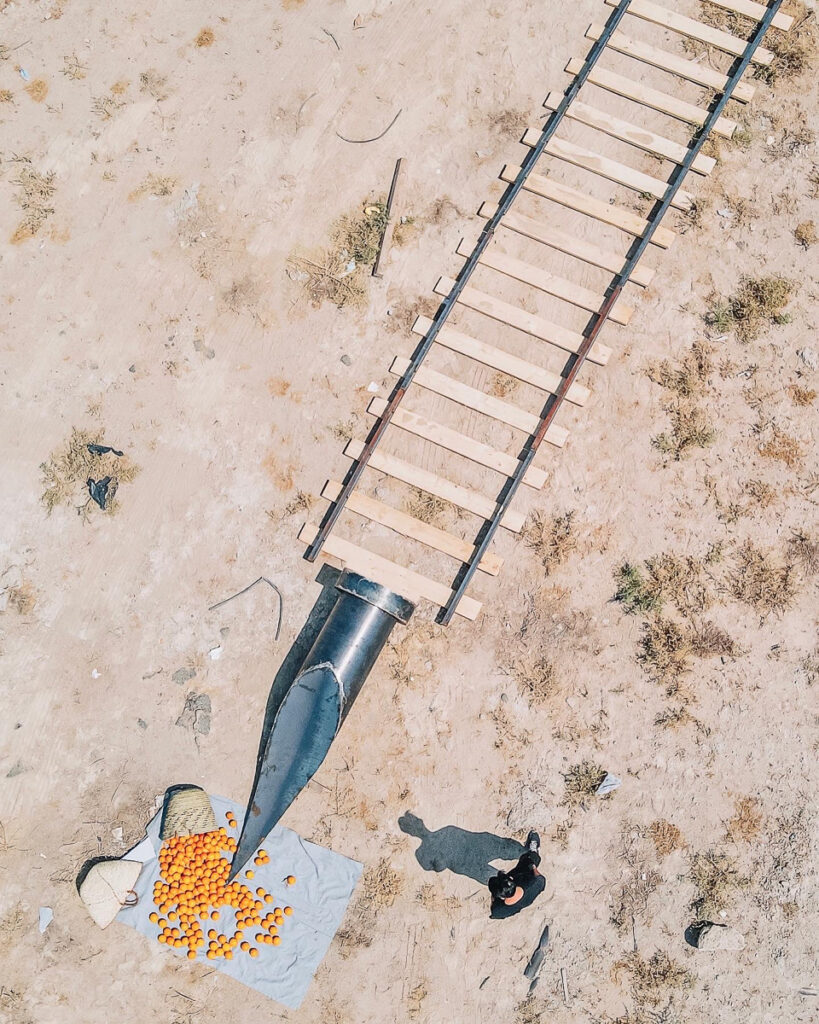