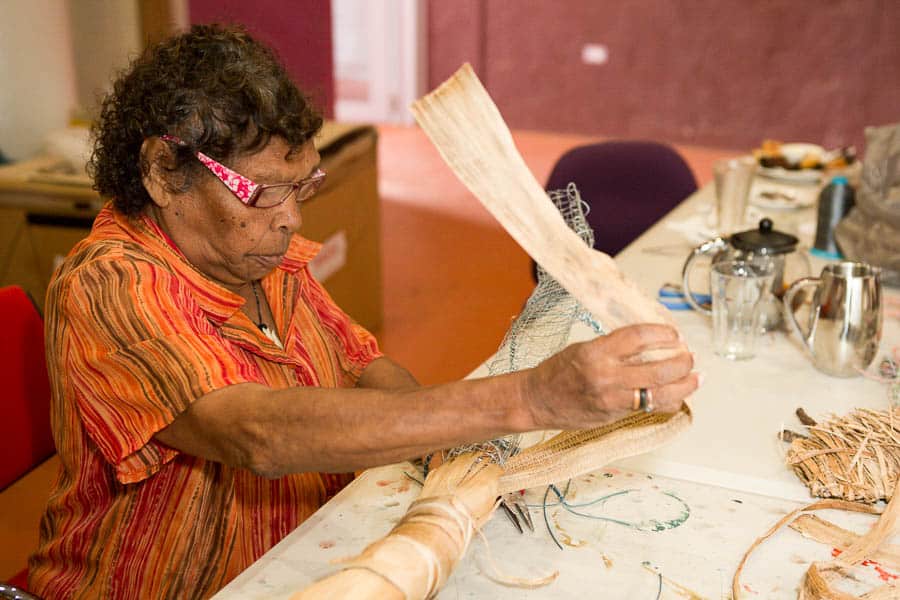 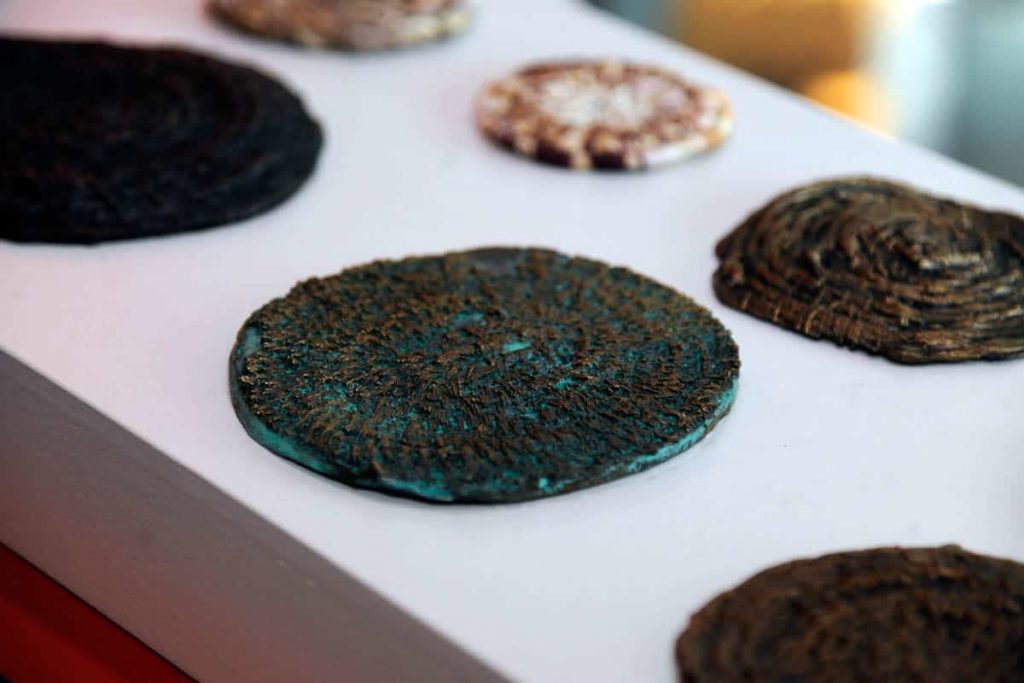 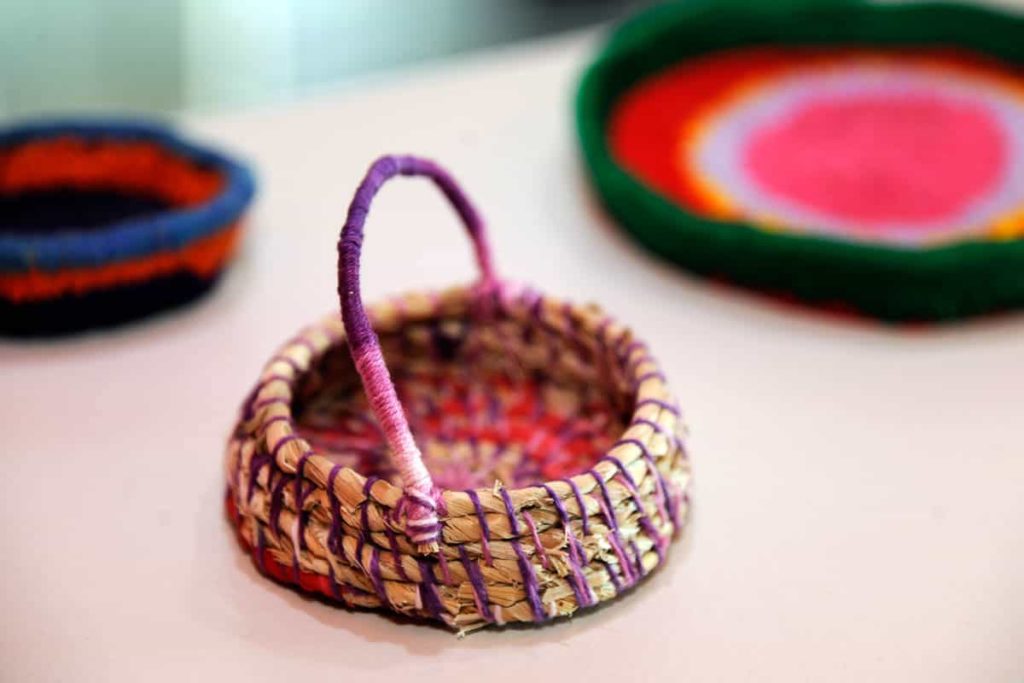 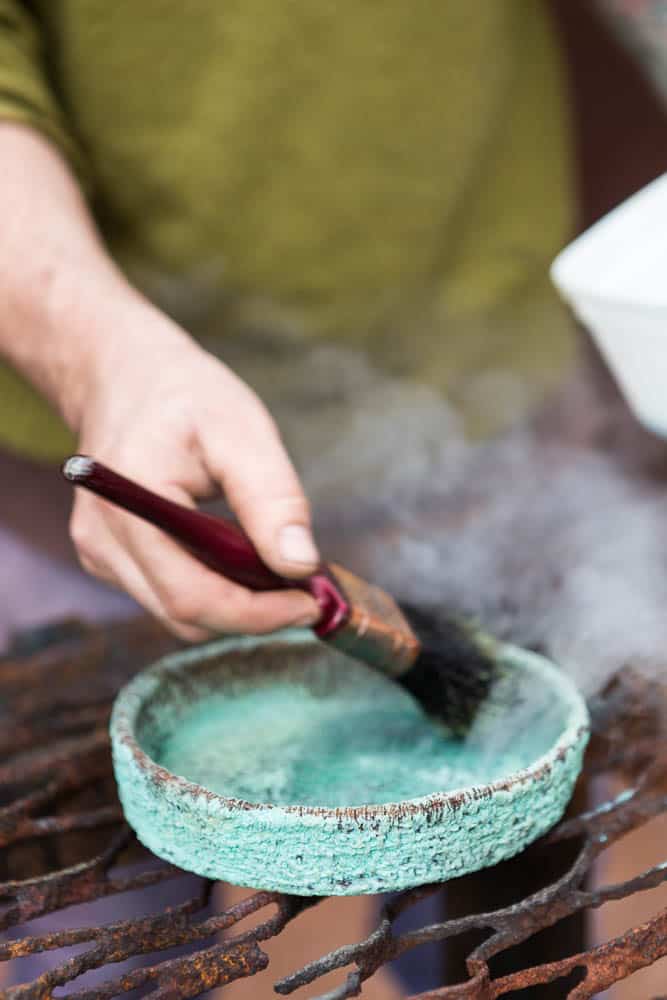 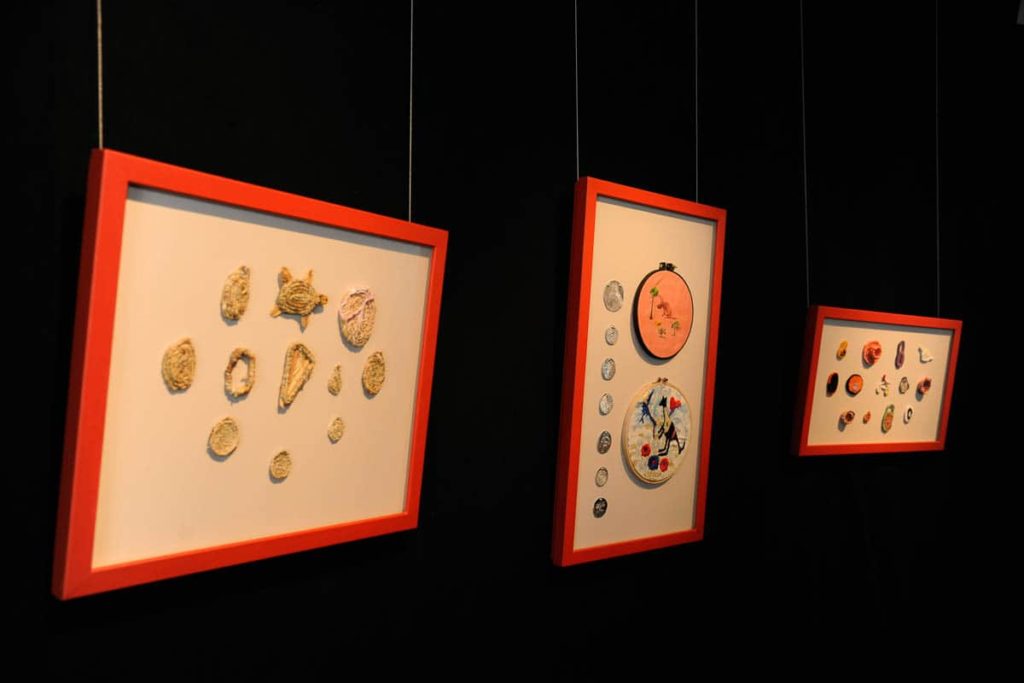 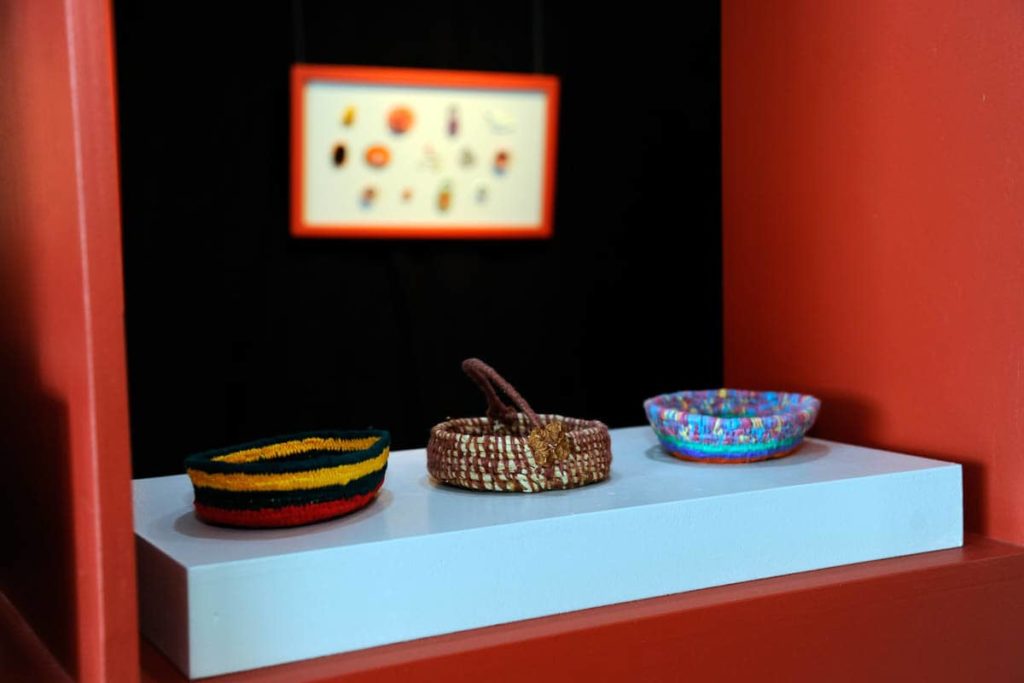 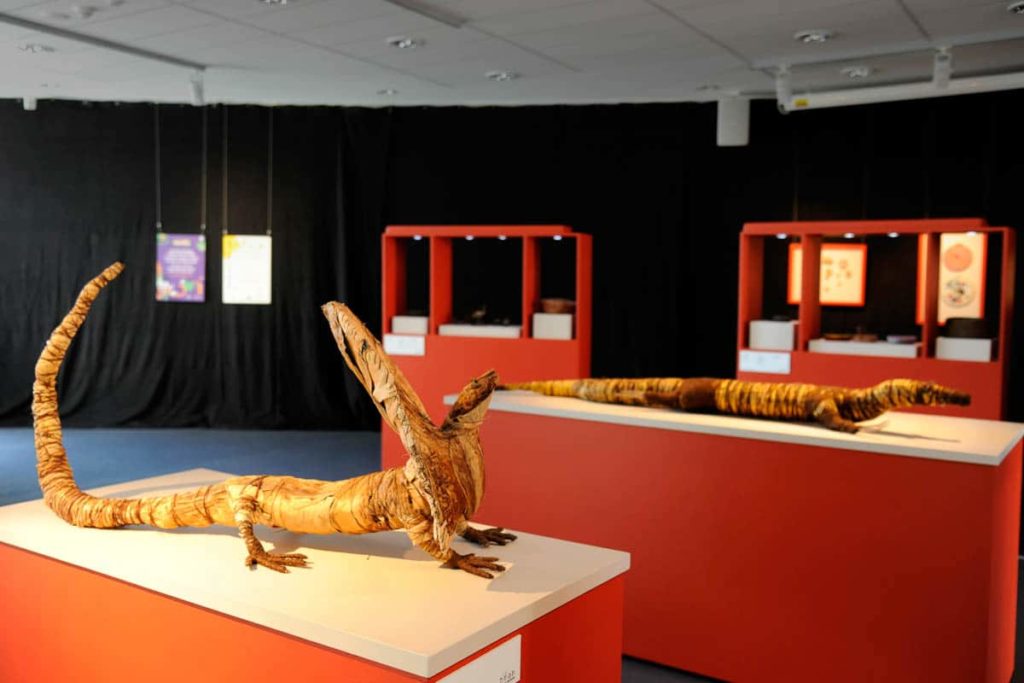 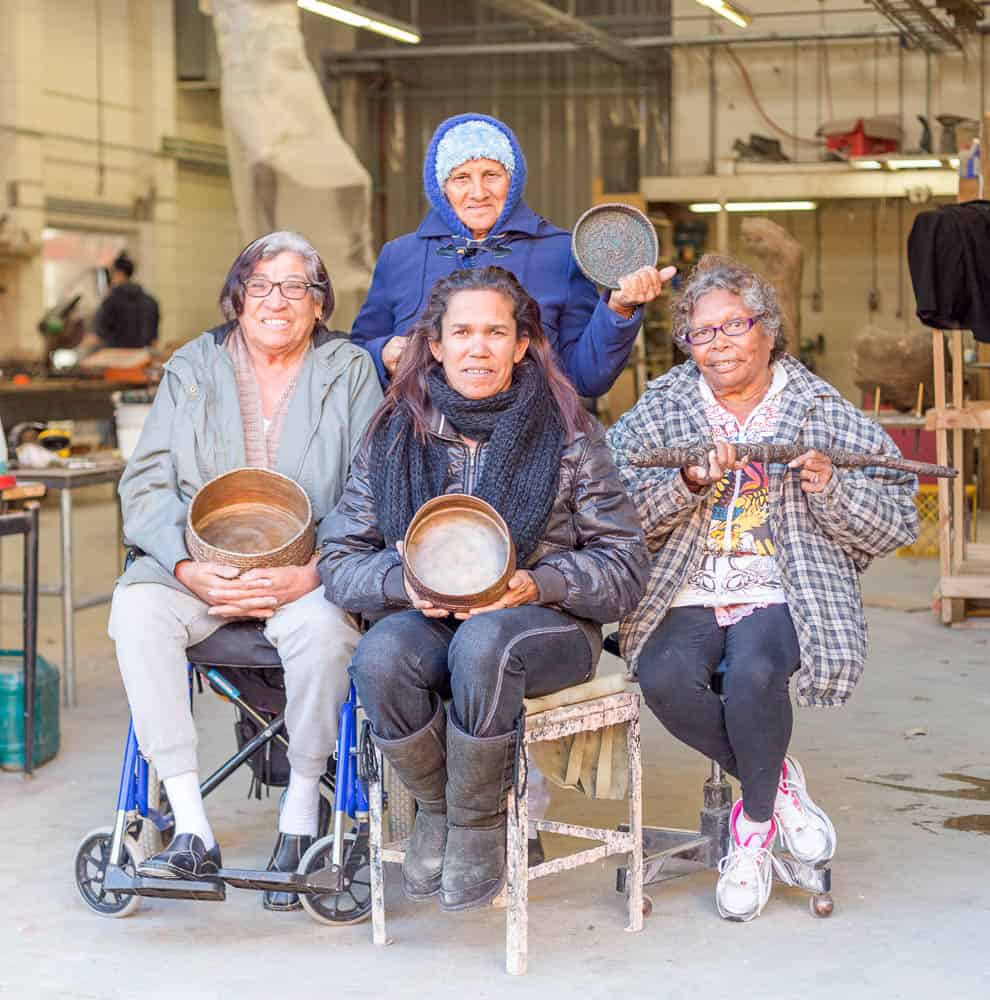 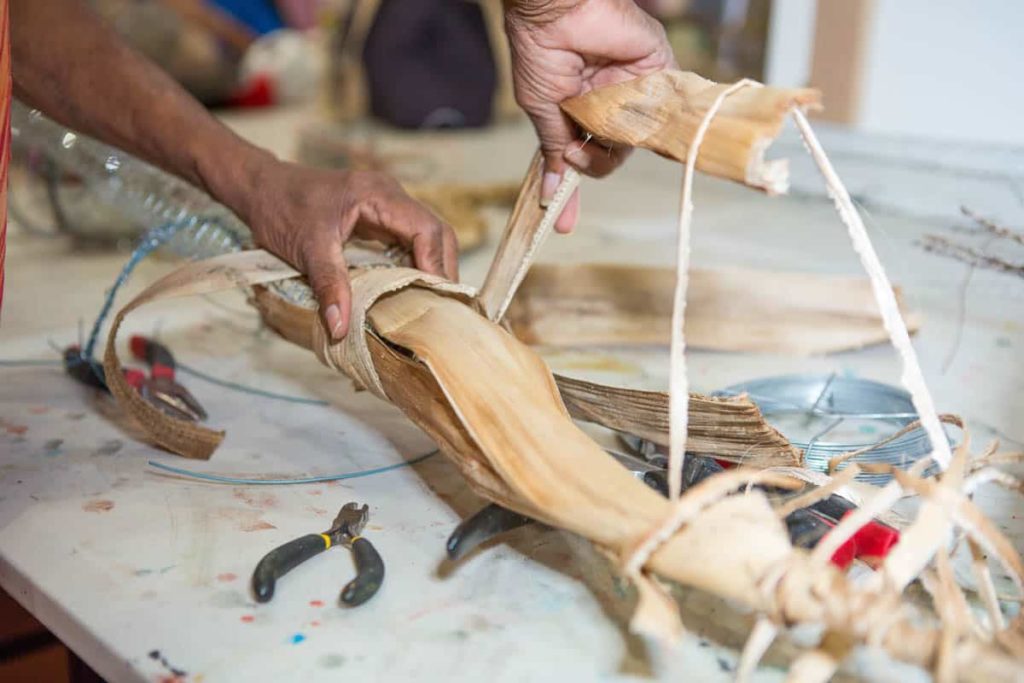 Jilinbirri: the North West Australian Aboriginal Yamatji word for an Australian bird, also known as the mudlark in Western Australia. Black and white in colour and small to medium in size, Jilinbirris are characterised by their group gatherings and playful behaviour. They are also well known for their nests made of grass and plant material woven together with mud, and generously lined with grass, feathers, fur and other found objects of interest.

My name is Antoinette Roe and I am the youngest member of the Jilinbirri Weavers. We are a small group of Aboriginal artists from Carnarvon, a remote area of WA. We have been working together since 2004, starting out as a women’s healing circle activity. Over the years we have been dedicated to our cultural heritage and community through our arts practice, creating our own unique and contemporary style that celebrates the Gascoyne region and our community.

The only Aboriginal weaving group of the region, we use traditional materials of grasses and wool, experimenting with found objects, wire, seeds, banana fibre from local plantations and textiles. In 2013 we worked with Helena Bogucki – independent contemporary WA jewellery and small object designer who helped us translate our woven forms into innovative cast metal objects. This took us to Melbourne to work with internationally acclaimed cast metal foundry artist, Mal Wood.

Baskets originally crafted in traditional materials are inspired by our childhoods… while we make we spend hours sitting around yarning and talking about these days. We hope that through Mudlark (Jilinbirri) Metals we can yarn with you some more about our lives, our community and our artistic journey.

The Jilinbirri Weavers are a small group of Aboriginal artists from Carnarvon in the Gascoyne region of Western Australia. They have been working together since 2004 in what began as a women’s healing circle activity, evolving into a group of professional and practising artists.

They were inspired to cast their woven objects in metal when they visited the 2007 Telstra National Aboriginal & Torres Strait Islander Art Awards in Darwin. Here they observed large contemporary bronze sculptural forms and began imagining their woven baskets and smaller objects in metal.

In 2013 the Jilinbirri Weavers worked alongside Perth based contemporary small object and jewellery designer Helena Bogucki to develop a body of work suitable for the cast metal process.

The pieces were developed over a 10 month period where Helena worked with the Jilinbirri Weavers, exploring small object design and assisting them throughout the casting process. This period of time allowed for concepts to be developed whilst liaising directly with the foundry artists to ensure suitable objects were created for casting.

As a part of this project with Helena, the Jilinbirri Weavers travelled to Melbourne to work with Malcolm Wood at Coates and Wood Fine Art Foundry. Through this process, they were able to capture their intricate woven designs, patterning and objects in bronze and aluminium.

Typically the Jilinbirri Weavers make baskets using the coiling technique with a spiral stitch. A small coil of plant fibre is bound with thread then stitched into a circle to begin a spiral. It is from this spiral that the work grows into a basket.

Wire has been used to construct sculptural forms by making an armature and covering with natural fibres. Then the forms are moulded in plaster and a cast made using the lost wax process. Patination gives colour to the metal through the application of oxides with heat and finally, the surface is sealed with wax to prevent further oxidation.

This body of work represents a traditional Aboriginal craft in a contemporary style. The intricate patterning and detail in the bronze is representative of the natural landscape, plantation and station areas where the Jilinbirri Weavers combine the use of natural grasses with banana fibre; unique to the Gascoyne area.

In bronze, the baskets become vessels that can hold water and become symbolic of the Gascoyne River, where the “desert meets the sea”. 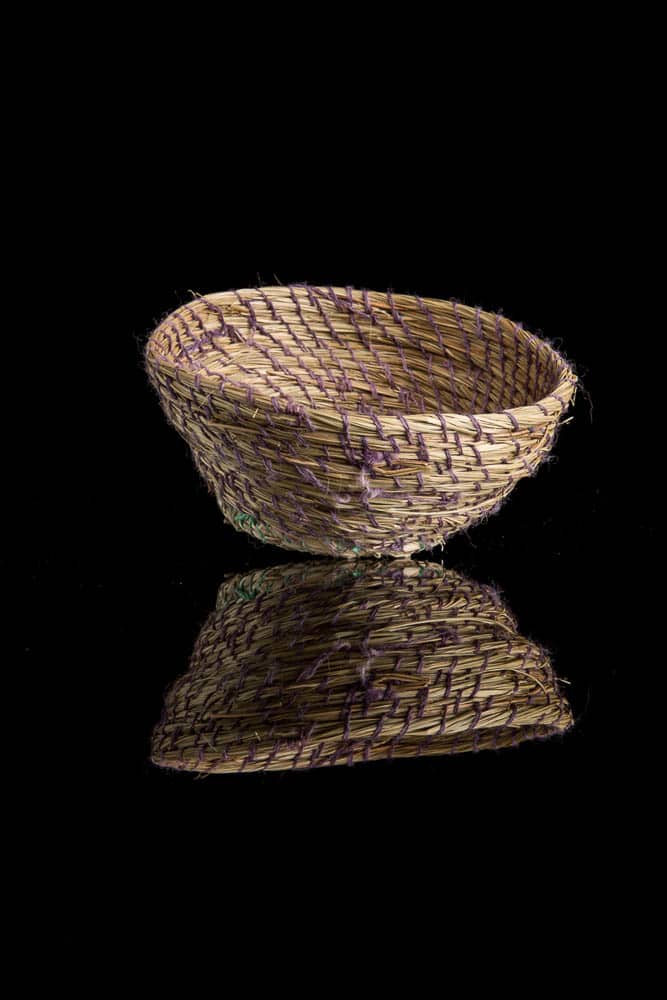 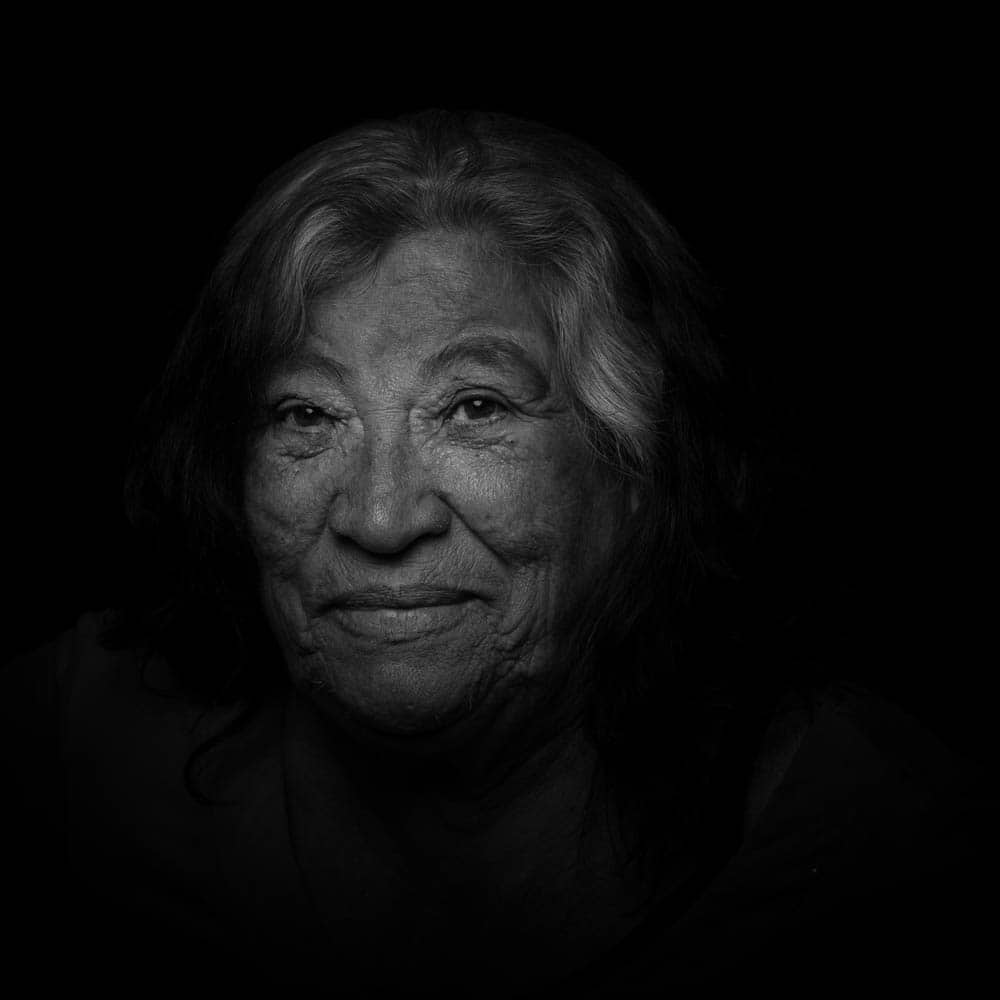 Elaine’s artwork represents the natural landscape, plantation and station areas unique to the Gascoyne region of WA; combining natural grasses, rope and banana fibre with metal. Originally crafted in rope and twine, Elaine’s work is inspired by her childhood growing up in station out camps around the Pilbara and Murchison regions. 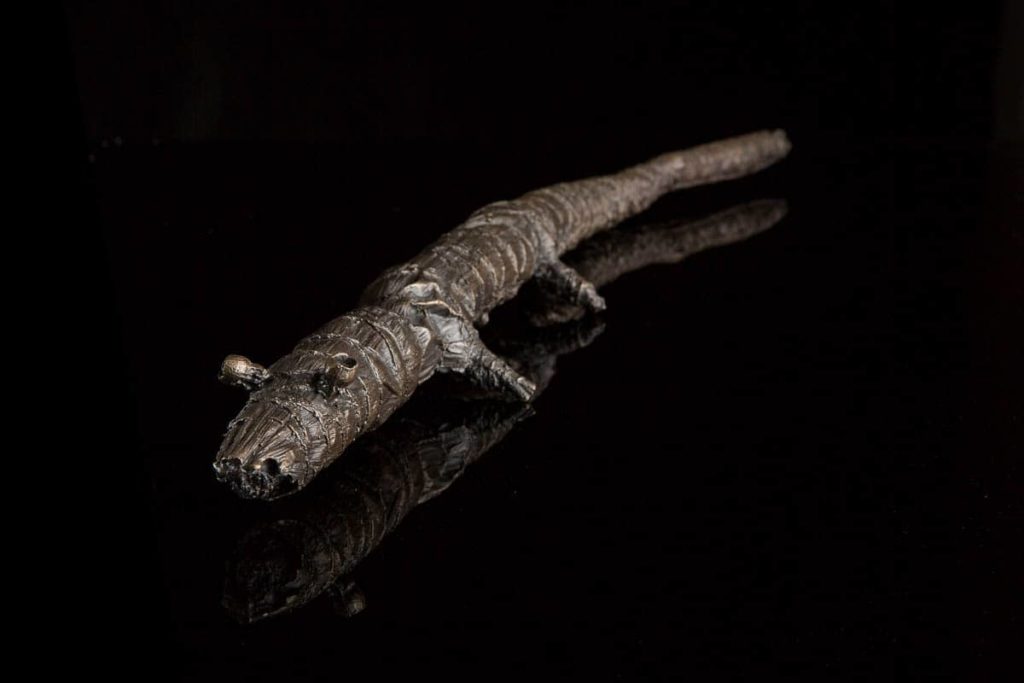 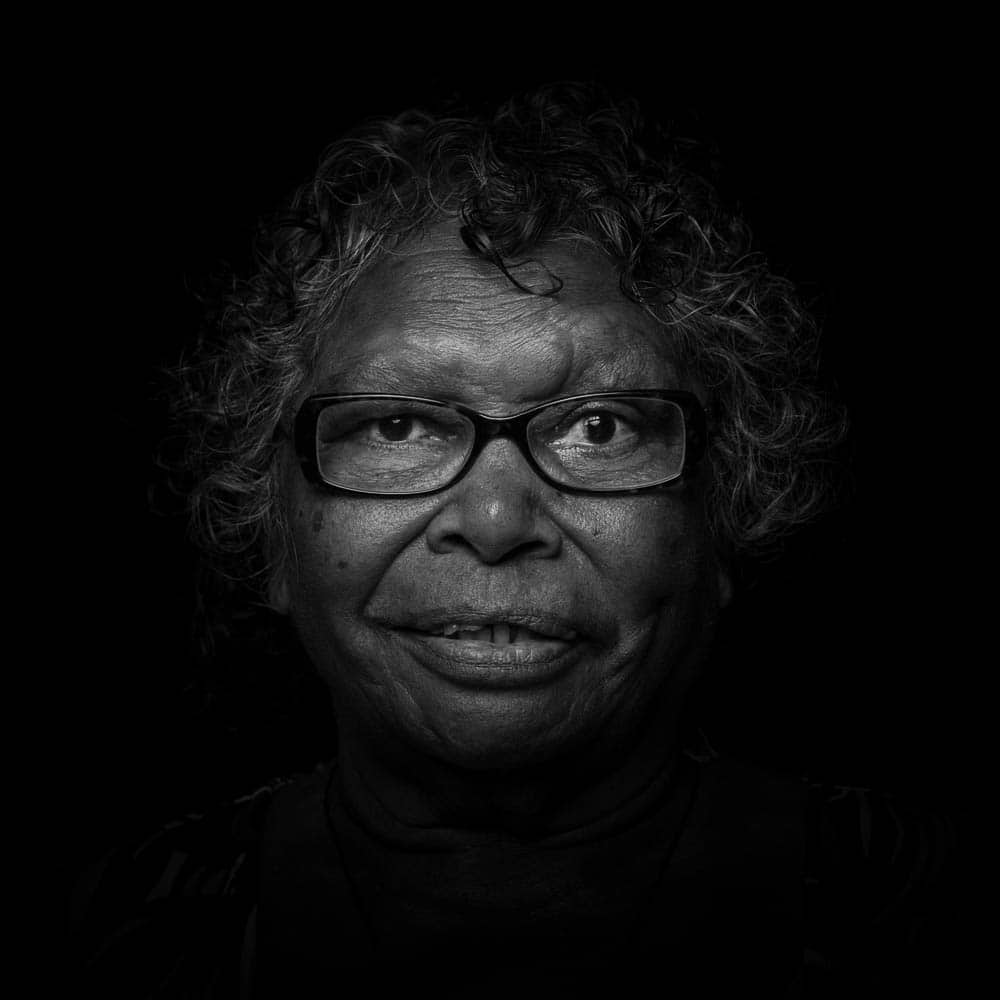 Marjorie’s artwork represents the natural landscape, plantation and station areas unique to the Gascoyne region of WA; combining natural grasses, rope and banana fibre with metal. Originally crafted in banana fibre and twine, Marj’s work is inspired by her days out hunting bush tucker around Carnravon. 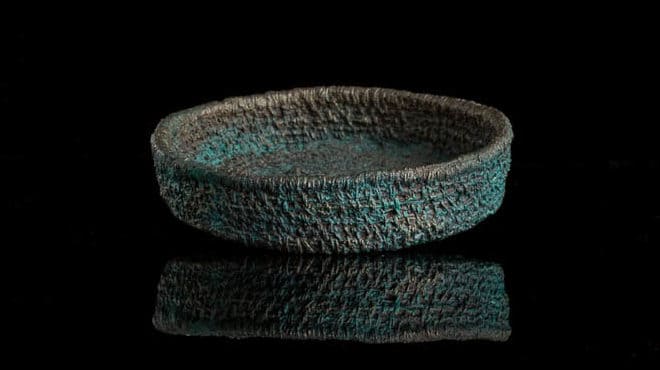 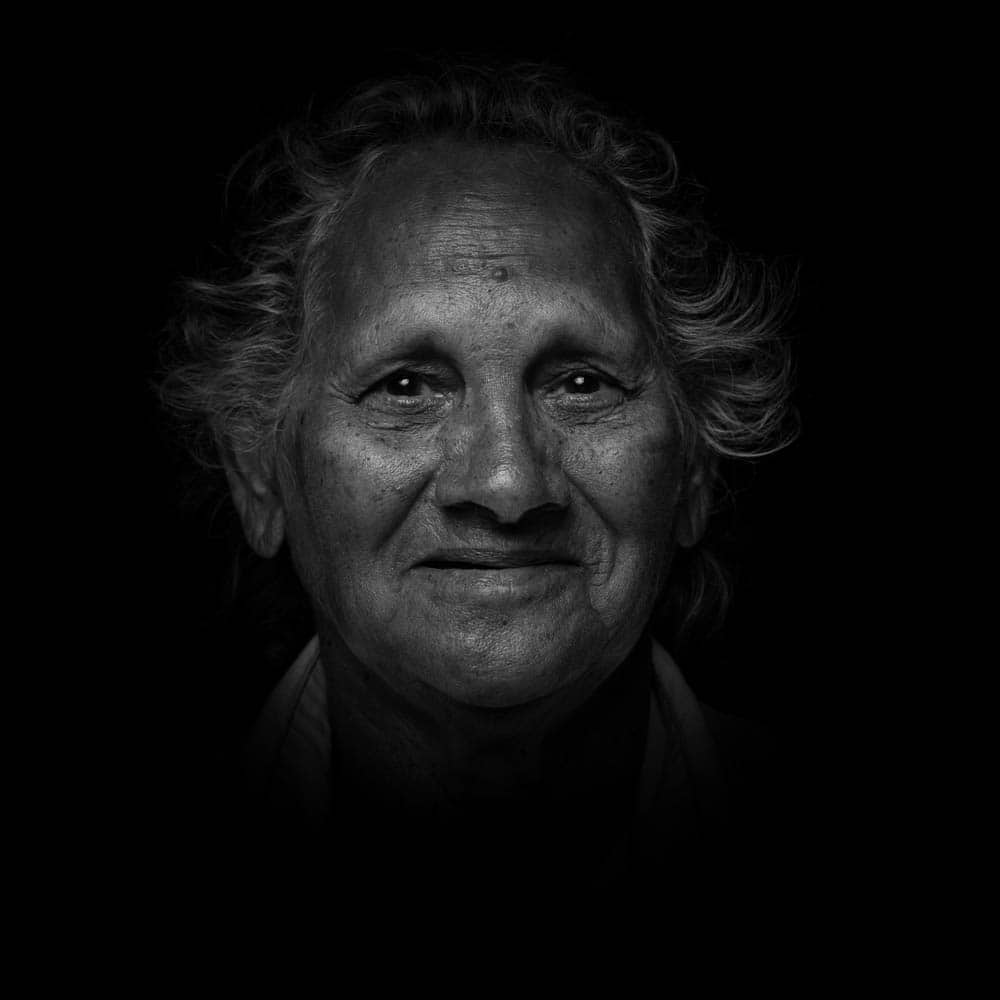 Avy’s artwork represents the natural landscape, plantation and station areas unique to the Gascoyne region of WA; combining natural grasses, rope and banana fibre with metal. Originally crafted in lemongrass and wool, Avy’s work is inspired by the landscape and water of the Ningaloo Reef and Shark Bay. 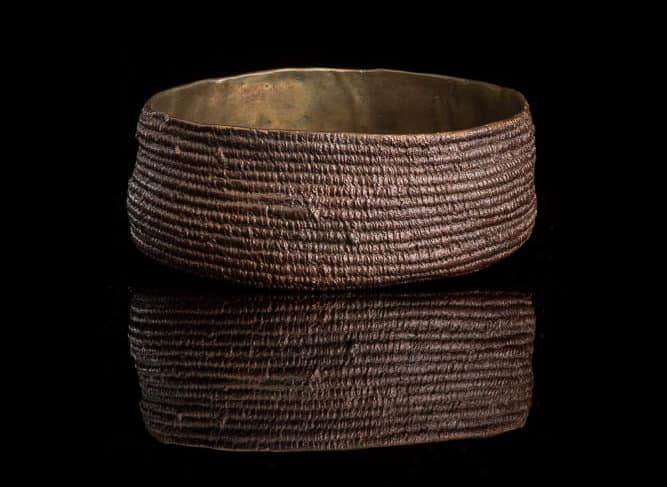 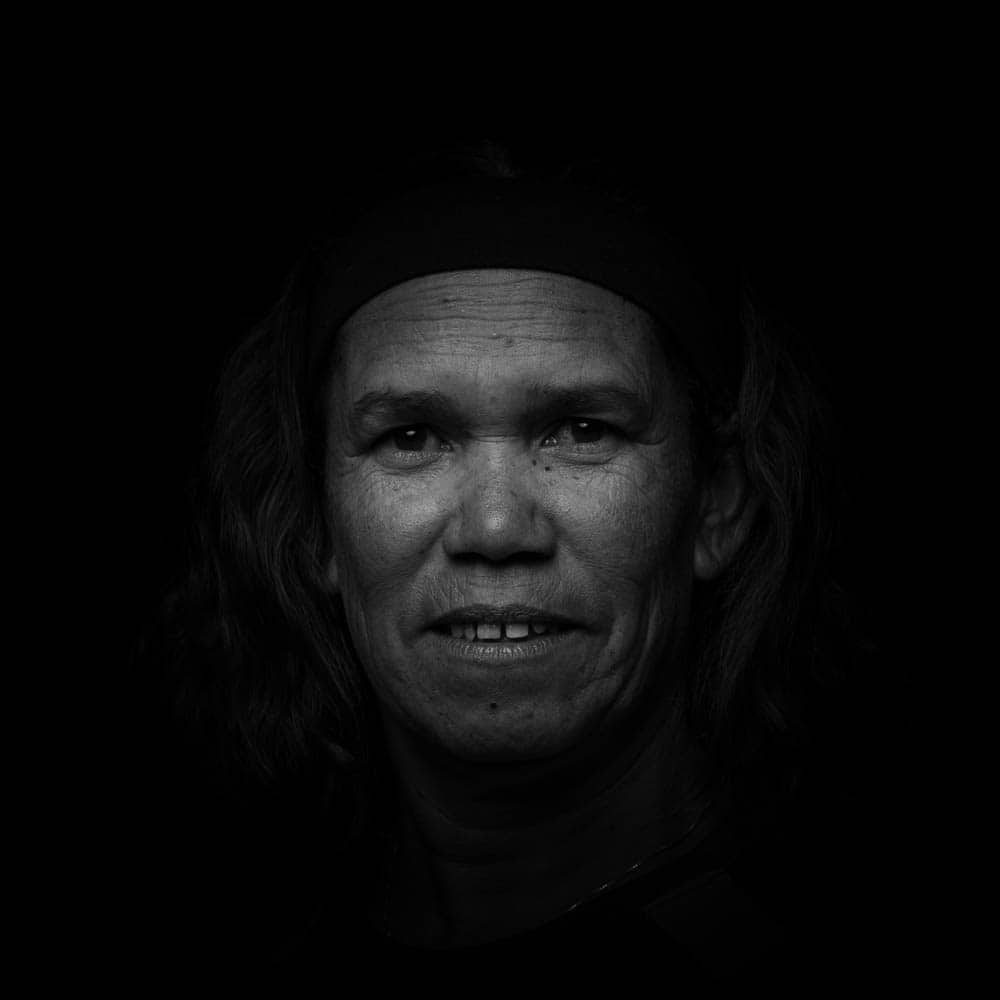 Antoinette’s artwork represents the natural landscape, plantation and station areas unique to the Gascoyne region of WA; combining natural grasses, rope and banana fibre with metal. Originally crafted in grasses and wool, Antoinette’s work is inspired by her childhood of fishing, camping, horse riding and stories from her Elders.

Helena Bogucki combines formed and found pieces, that reflect a passing moment or conversation in her contemporary object design. Her role was to provide guidance to the artists in the development of their metal objects.

Mudlarks Jilinbirri Metals is a touring exhibition from ART ON THE MOVE. It will be appearing at Bunbury Regional Art Gallery 14 April to 27 May 2018. 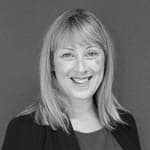 Sarah Trant holds extensive experience in community development, the arts and culture, education and training, and in business and economic development; in government and with Not-For-Profit organisations. Sarah’s career spans Sydney, the Pilbara and Gascoyne regions in WA, and the Central Coast of NSW where she has made significant contributions to the development of urban and regional communities. Sarah was pivotal in the making of the Jilinbirri Weavers, working with the group in an arts, cultural and project management capacity, from when they commenced in 2005 until today.