A head start for heritage: The Kastamonu hat museum 🇹🇷 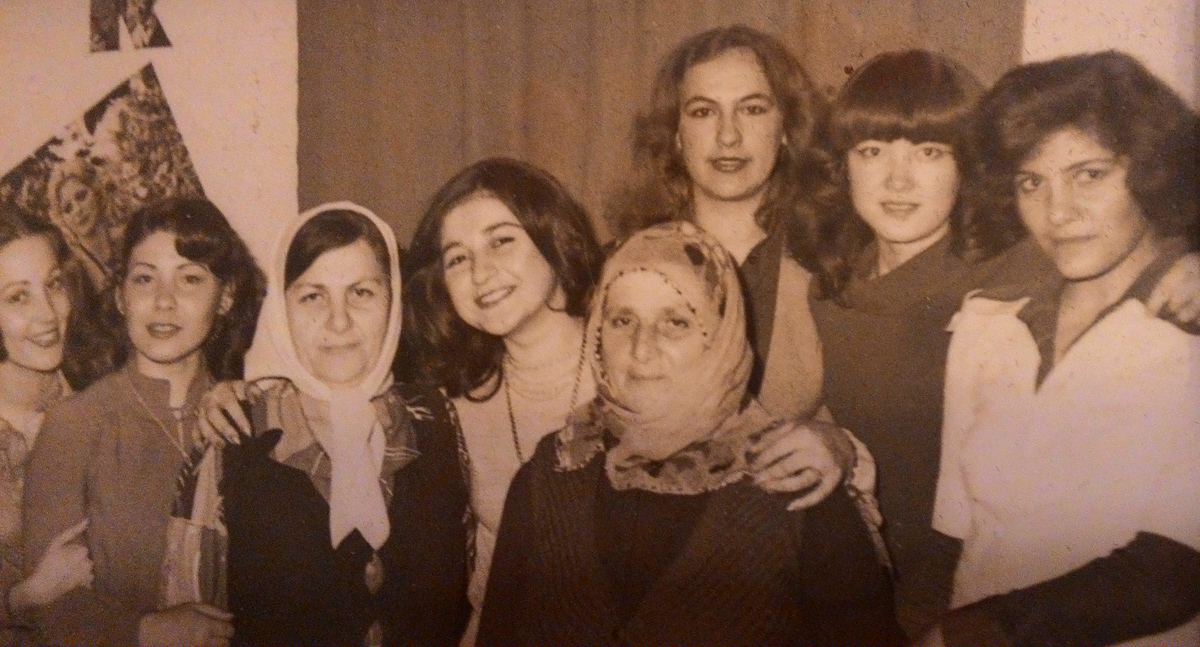 (A message to the reader in Turkish.)

Lale (tulip) is deep-rooted in Anatolian history. It has many stylistic expressions in art and craft works of the Ottoman Empire and the Republic of Turkey. In old houses, it is possible to see the tulip motif in many traditional crafts and art works, starting from the pattern of the garden and front entrance doors, and extending to hand-woven fabrics. Today, Lale festivals continue to be held in many cities in April-May with the arrival of the spring season in Turkey, especially in Istanbul.

Apart from describing a flower, the word tulip is adopted in our culture as an indicator of human values. Families give the name Lale to their daughters, which means that they will lead an honorable, honest and upright life.

The life story of Lale, who is the subject of the story, is also in a structure that identifies with her name.

Lale was born in Samsun in 1956. She learned to produce handicrafts from her family elders in a small village in the Green Black Sea region in the north of Turkey, 1979. The village was founded in the Republican Era and provided education in accordance with Atatürk’s definition of ideal youth. She graduated from Ankara Başkent Girls’ Technical Higher Teachers’ School as a Handicrafts Teacher. The school does not continue today.

With a love for history, she set out to learn about the past of her own lands, to examine the works of art bearing the traces of the past and to adapt them to the present.

When they produce; You may encounter images of a stone tablet or traces of a monument in museums, or you may come across a reflection of an archaeological excavation that has been sketched. 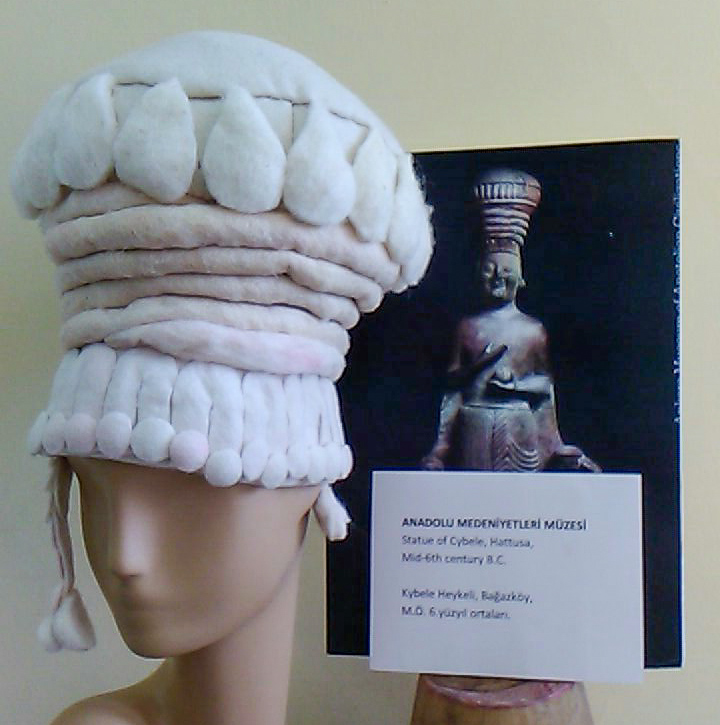 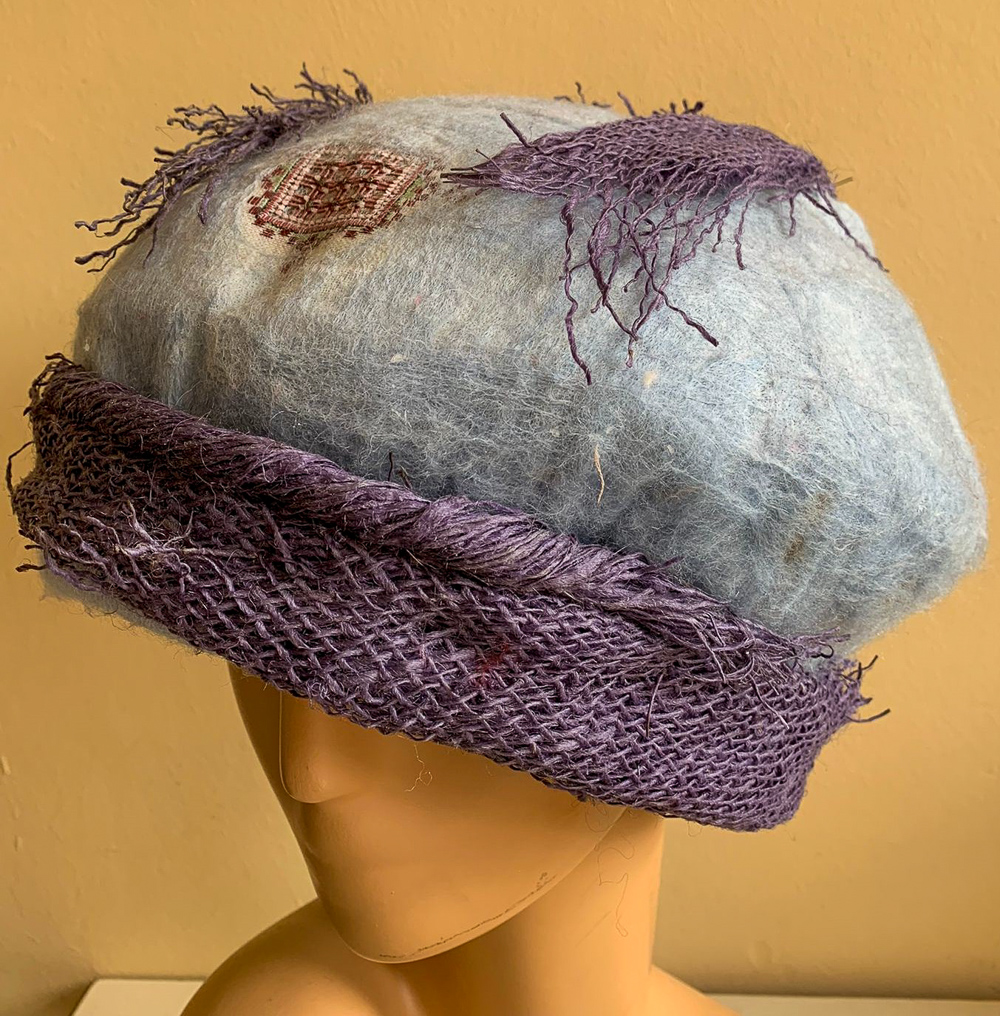 In handicrafts; the processes of acquisition, design, production and protection of knowledge are an inseparable whole.

Lale is the founder of Turkey’s first and only hat museum. You can learn much about the cultural history of the country from this museum in the city of Kastamonu on the Black Sea. You can witness the rich and poor gatherings of Anatolian farmer village hats and modern city hats collected and donated with the support of Lale and her friends.

It is interesting to see the nostalgia showcase in the museum where the hats used by many famous people are exhibited. 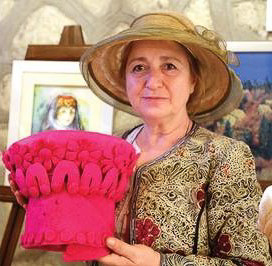 Lale has chosen the titles of the figures in the stone artifacts found in the Gordion museum in the Polatlı district of the capital city of Ankara for its final exhibition. She interpreted the heads of the one-dimensional stone figures with felt and designed them in three dimensions.

As a material, she turned the raw wool fibres into felt with the help of soap and water. She tightened the wool with its natural colour or dyed wool with her hands, pressed and applied the felt fabrics to the patterns she created with paper and drawing.

After producing hats from felt, the remaining small pieces were evaluated in different handicrafts, especially felt dolls or boutonnieres.

The museum also hosts a series of commemorations and hat events in Kastamonu, where Atatürk, the founder of the Republic of Turkey, greets the people with his hat for the first time in August every year.

In Lale’s words, it is not a coincidence for her that her dream of establishing a museum in Kastamonu, located in the Black Sea, came true. It is where the hat reform took place in the history of the Republic and modernization. It is part of her commitment to ​​education.

She is not an ordinary educator. Her story reflects the culture of preserving and keeping handicrafts alive. She leads many academic studies on the culture of historical accumulation and preservation.

Today, the “doll museum” is where you can see examples of handicrafts in Turkey and a group of dolls in the showcases of this museum. It consists of rag dolls that Lale’s mother made for her.

Dolls are miniatures of all the people of the village they live in (including the village’s shepherd, teacher, headman, neighbours and father). You can take a journey through the memories of the past.

When you examine the babies, you can admire the fine details, you can catch the clues of the traditional dress and decorative culture with the vest and cap, like the moustache of a Black Sea village headman.

These cute dolls that put a smile on your face attract the attention of not only children but also many adults. The tourists pass through the museum to see miniature examples of a village from the past. Lale emphasizes that she fulfils a moral responsibility by giving the name of her lost mother to the museum.

Another small museum located next to the hat and doll museum is the lace museum, and the third hard-working living museum founded under the direction of Lale.

With the support of the local government, Atatürk’s arrival in Kastamonu and the Hat Revolution celebrations are held as official festivals in August every year (pause in the pandemic).

Handicraft activities and historical meetings are held in the garden of the museums for a week. Those who practice and preserve these crafts, as well as those who try to teach them to new generations, are living treasures.

Lale’s two daughters also preferred to be teachers like her. When they want her to be the name maker for their grandchildren; She stated that the names of mountains, rivers or flowers (Ilgaz, Tuna, Açelya) of the geography she lived in should be put together with the date. She believes that the names given to babies are important in the formation of their personalities and in the protection of the future.

If one day your way passes through Turkey and the Black Sea, you can donate a headgear and a handmade doll that will keep your mother’s name alive, like me, to museums and share this historical pride.

In Lale’s words; “The door opens to a 3-day world, what you see is a window (yesterday-today-tomorrow) if you know how to look with the eyes of the heart, the only thing reflected from the other side of the glass is only human, only good person…”

The Evaluation Of Museums On The Protection Of Our Cultural Heritage And The Evaluation On A Sample Which Works From Our Near History: The Hat Museum, Dr Lale Özder

Bilums and bilas: From bags to jewels in PNG
Tepelikler: My Anatolian grandmother’s headdress
How deities are born: Bronze casting in Nepal
The Fidan doll: A bridge between Turkey and Japan
Utsuwa: The extraordinary is every day in Japan
Abdullah's lullaby of lost looms
Polishing: An overlooked craft
Let's go back to the campfire: The lesson of mingei