Made in Indonesia: The globalisation of Indonesia’s footwear industry and the legacy of shoemaking 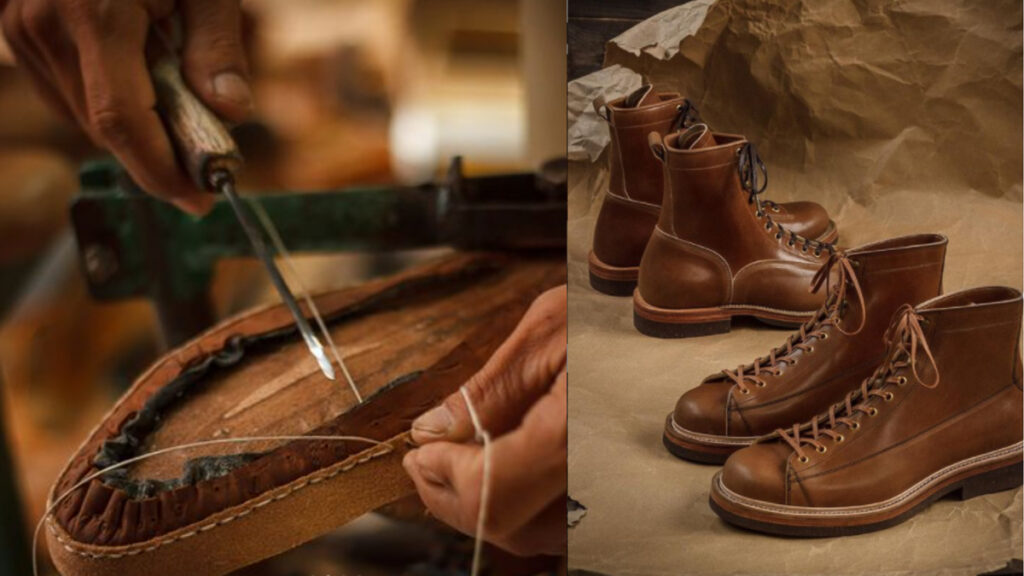 (A message to the reader in Indonesian.)

A Chinese proverb says, “a journey of a thousand miles, begins with a single step”. Every step we take in life carries stories and experiences, therefore, a pair of shoes are not merely made to protect and comfort the human foot, but also to accompany our life’s journey.

Indonesia has been recognized as one of the ten largest footwear manufacturers in the world besides Vietnam, India, and China. My country has become a manufacturing base for international footwear brands in several categories including boots, leather footwear, and sneakers. There are several footwear manufacturing hubs spread over several cities in East Java such as Jombang, Mojokerto, Malang, and Sidoarjo, also home industry areas such as Cibaduyut in Bandung West Java and Magetan in Middle Java.

My passion for footwear products and industry started about twelve years ago, just before I moved to study in Bandung. However, the local footwear market at that time mostly offered a limited selection of primarily lower price unbranded goods. People were still used to buying footwear from mainstream international brands available in department stores and conventional markets. However, if we were a gigs lover of independent bands and primarily living in Indonesia’s big cities, we must have had at least a pair of Dr Martens boots back then. Therefore, the shoes I bought with my own money were maroon Dr Martens boots and a pair of brown Sperry Top Siders boat shoes—both bought from the flea market.

Following my passion, I met a partner who also likes crafts and fashion products. We have visited many second-hand markets, home industry areas, and manufacturing hubs. From the second-hand market, we buy any fashion product to learn its construction and details by dissembling the product. Then, as time went by and I met more craftspeople, I realised that Indonesia has values that can be explored beyond just being a producer of global brands. As a country known for its traditional crafts and culture, Indonesian craftsmanship in the footwear industry seems quite underrated compared to European countries or Japan. Thus, through this article, I would like to share my journey of meeting some shoe craftsmen in Indonesia while witnessing their creative and production process.

Ten years ago, we met an Indonesian shoemaker, who has since become a respected friend. At that time, Bagus Satrio was just starting his shoe business with his wife. Bagus introduced us to many western brands such as John Lobb, Alden, and Crockett and Jones which initially inspired him. However, the moment that I remember the most is when Bagus introduced Sagara Indonesia, his own brand.

From the very beginning, I have seen Bagus consistently build Sagara Indonesia as an artisanal brand with traditional hand-welted construction techniques. The hand-welted technique has been a fine quality method of constructing shoes since the nineteenth century. A pair of shoes takes two to three weeks in the production process, which means that by buying Sagara shoes we also buy the craftsman’s time, thoroughness and skills that are continuously trained.

Bagus believes that handmade Indonesian boots are one of the best in the world. Besides its neatness, and as a fully handmade product, one of the advantages of buying Sagara Indonesia is that consumers, which are mostly American, can discuss directly with the owner so that there is a personal experience in the Made To Order process. I recently asked Bagus what he would do with Sagara next and he said that he enjoys doing it as a small artisanal brand from an exotic country Indonesia, just like the very first day he started the business.

Beside Bagus, we also met a Malang shoe craftsman named Mas Arif. Some areas in Malang are renowned for handwoven crafts for household appliances using rattan or bamboo. Accustomed to studying western products, at that time we suddenly remembered the most famous bag design signature by Bottega Venetta, its weave. So, we tried to ask the craftsman if he was able to implement the handwoven technique into a pair of shoes.

Together with Mas Arif, we designed custom shoes based on the production limitation. The first handwoven shoes we made with Mas Arif was a pair of chukka sneakers boots. Buying a pair of these shoes is equivalent to buying fourteen hours of the craftsman’s dedication and craftsmanship because nothing but hands are able to weave on the shoe last. Mas Arif needs to precisely hand cut the leather and then woven it manually by hand. Later after the first shoes, they became a brand name, Kobuki. Mas Arif also got investors and have developed handmade leather shoes with the brand name Shoeka Shoes. 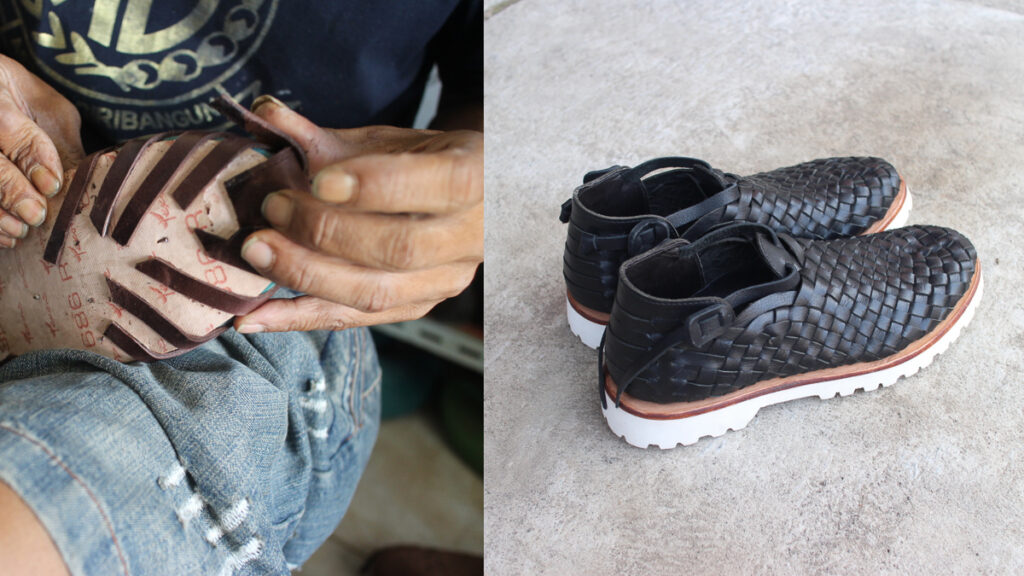 Last but not least, I met Ibu Naomi, one of several craftspersons who has been working on shoe manufacture and international brands. Some shoe categories such as sportswear require technology in the production process which makes them usually made in factories. Getting used to speed and industrial machines, I asked Ibu Naomi to make sneakers using her home scale sewing machine. Using factory waste materials, Ibu Naomi sewed the upper using different yarn and sewing patterns to create a top stitch accent just like what I intended to. The entire process of upper making was being done at home and only the outsole assembling process was carried out at the factory since it used cold cement construction and it required heating tunnels and press machine. 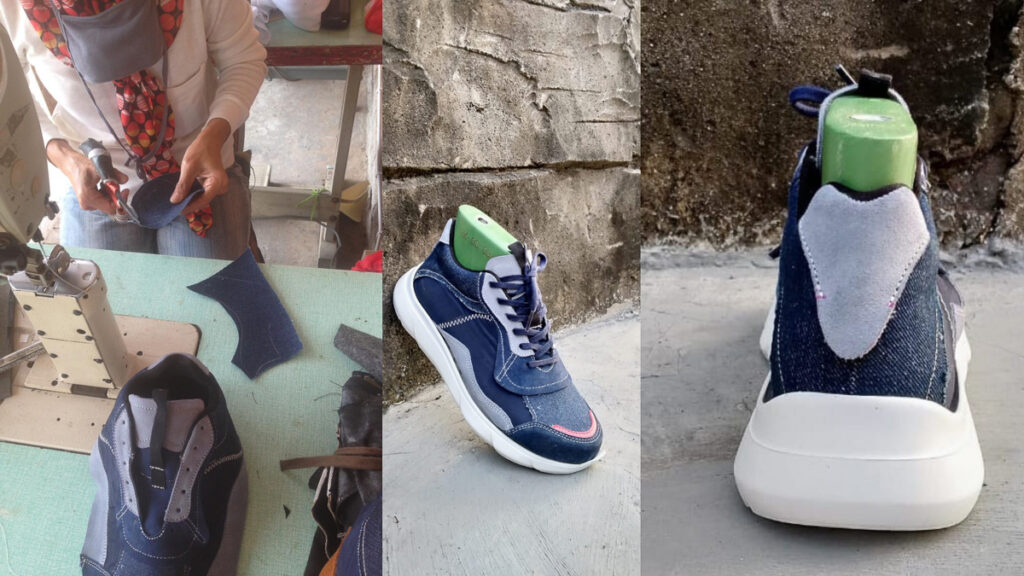 Eventually, myself, my partner, and Ibu Naomi are mostly involved in the footwear industry for mass production. Meanwhile, friends like Bagus and Mas Arif are still working consistently in the handmade production and Made-To-Order market. Indonesian local brands nowadays also have rapidly grown and are very competitive in terms of design, price, and technology. This is supported by the development of information technology and marketplace platforms in Indonesia.

Even though every aspect including the footwear industry are affected by the COVID-19 pandemic, I hope that through this article, Indonesia is not only known as a manufacturer of global footwear brands, but also can be appreciated and widely recognized for its creativity and craftsmanship. I wish that the pandemic will end soon so people can step foot into Indonesia and see the footwear that we are proud of. 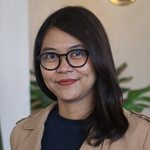 Rahayu Budhi Handayani is an entrepreneur, trainer, and consultant in product research and development sub-sector crafts and fashion with a speciality in bag and footwear. She is also a lecturer at Universitas Ciputra Surabaya, Indonesia. Her current project includes handling the production of several local brands and giving training for SME. As her contribution to fashion and craft development in Indonesia, she also manages an academic fashion journal named Moda as an Editor in Chief. She loves to travel around, visit craftspeople and learn how beautiful products are made. Follow @kobuki.id and @shoekashoes and contact rahayu.handayani@ciputra.ac.id