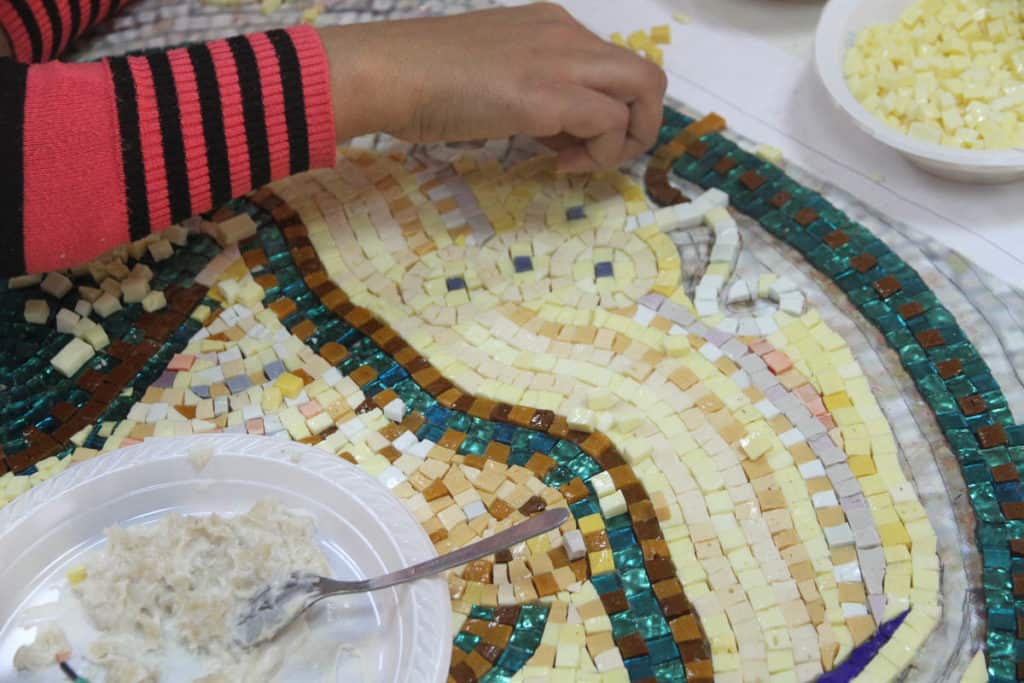 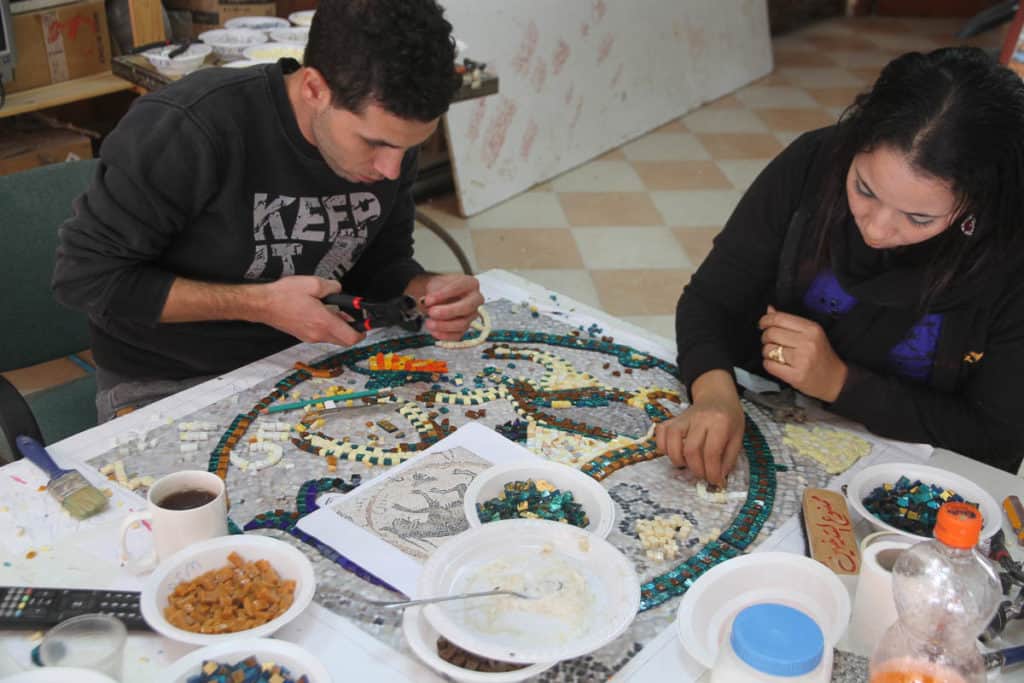 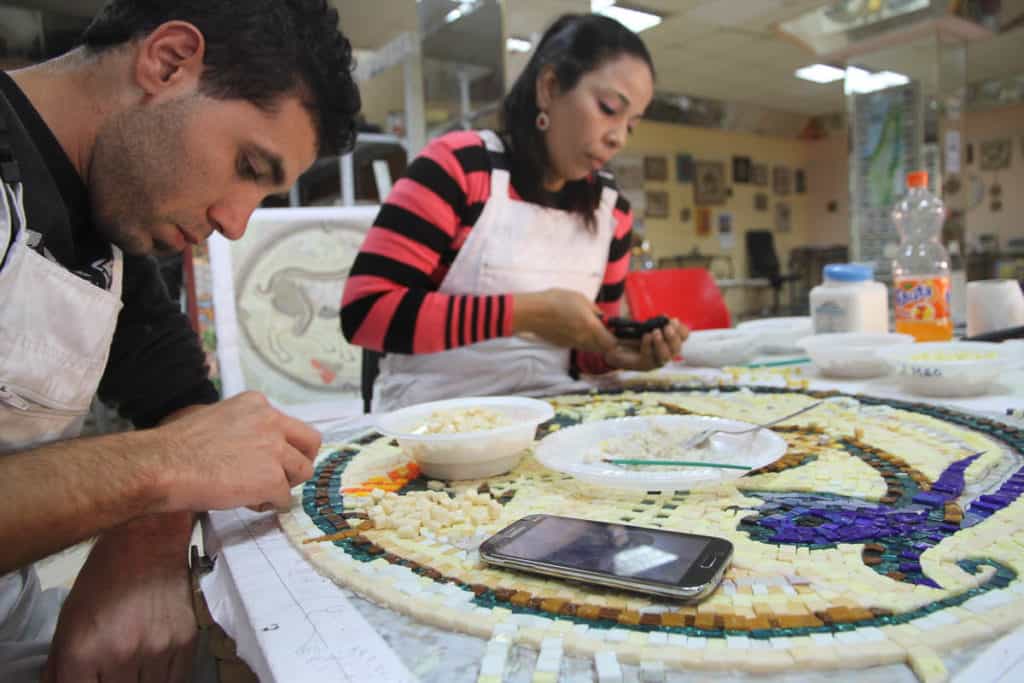 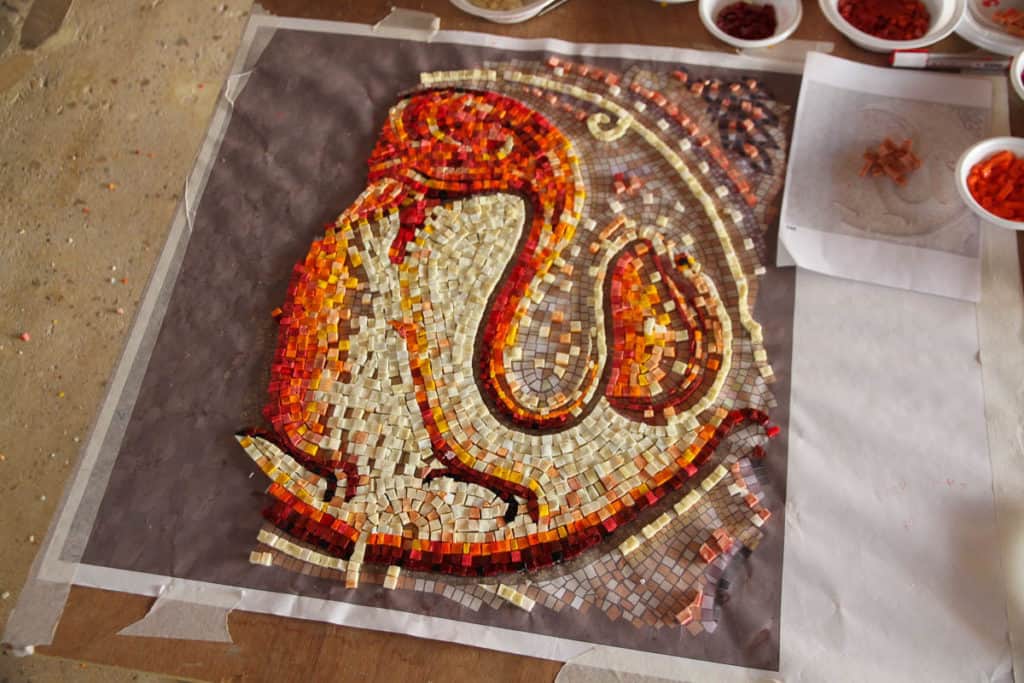 One hundred years ago, when Australian troops were fighting against Ottoman troops in Palestine, a group of soldiers uncovered a floor mosaic in one of the enemy trenches. The mosaic featured an iconography of animals like a bestiary. It was part of an early Christian church created during the reign of Emperor Justinian I in about the sixth century. Struck by its beauty and cultural significance, the soldiers painstakingly removed it, despite a German aeroplane circling above. Eventually, the mosaic became a founding item in the collection of the Australian War Memorial, where it was laid into the wall of the Hall of Valour. Above it, in the Hall of Memory, Napier Waller was commissioned to produce a complementary mosaic reaching up to the dome.

Tom Nicholson’s work proposes a repatriation of the Shellal mosaic to its original hilltop near Gaza. This installation consists of crated segments based on the original design, but constituted by tiles using the alternative chromatic range of Waller’s art deco work. The proposition is that the new Shellal mosaic would be made from the tiles of the actual Waller mosaic, reciprocating the loss of the original rather than presuming it can be annulled.

This is the third in a series of “comparative monuments” by Nicholson. The series was initiated through an invitation in 2012 from Jack Persekian. During the development of Nicholson’s series, Persekian was director of the Palestinian Museum, an institution with a distributed program that reflects the diasporic condition of its culture and people. In 2012 Nicholson produced Comparative Monument (Palestine) based on the ubiquity of the word “Palestine” boldly featured in World War I memorials across Australia. Posters of nine Palestine monuments in Victoria were exhibited in Jerusalem and also pasted up around Ramallah. Two years later, the second in the series, Comparative Monument (Ma’man Allah) (2014), focused on Australian eucalyptus trees in Israel/Palestine, planted extensively by early Zionists to drain swamps and claim land. 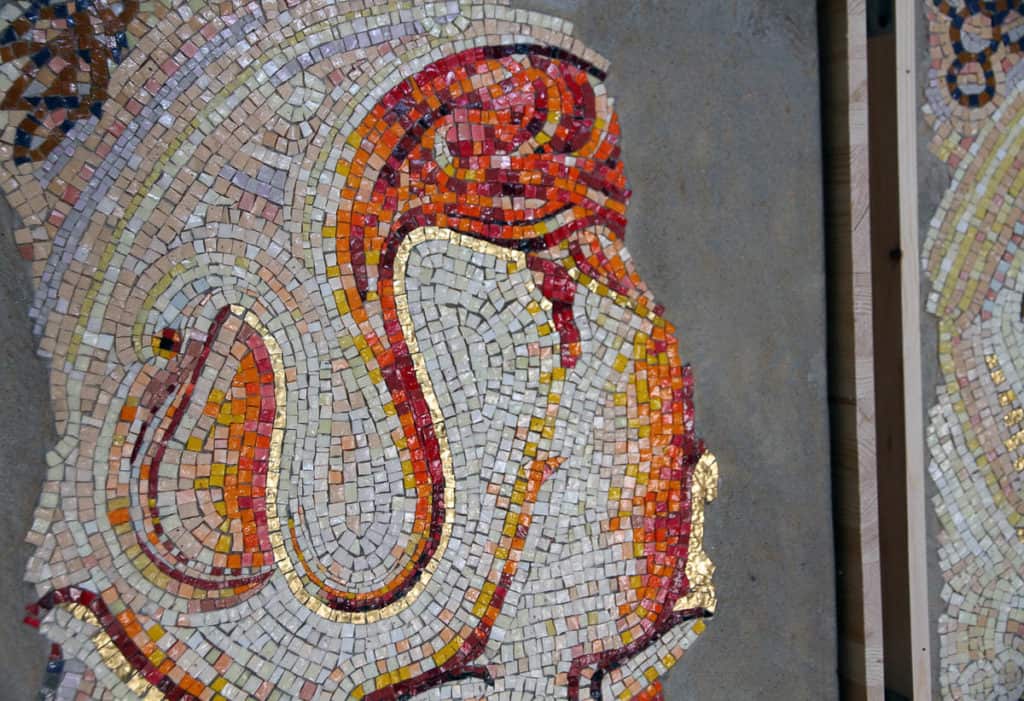 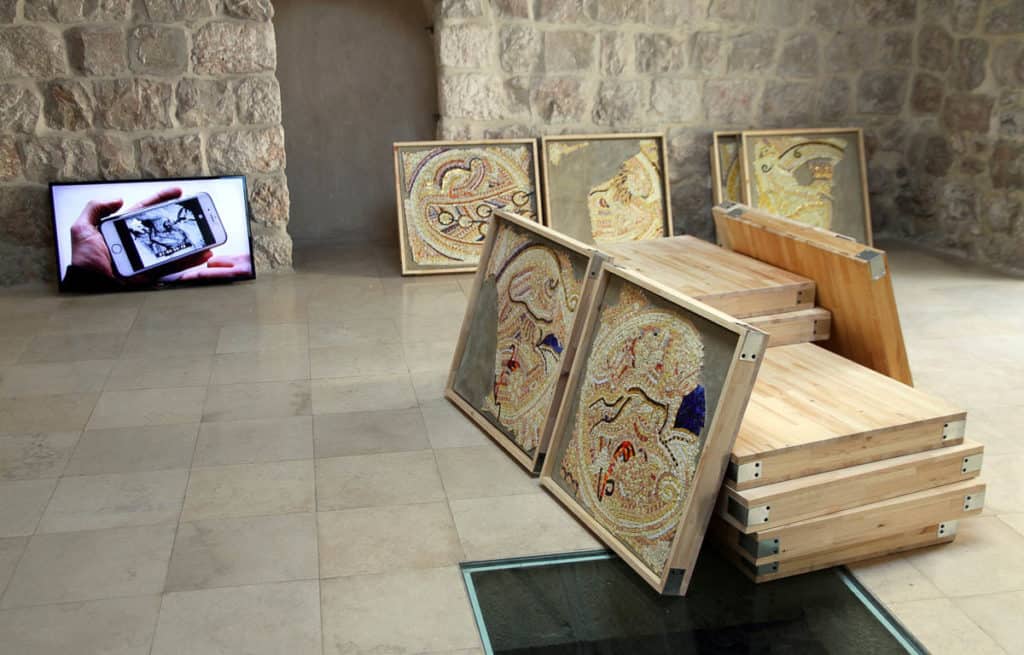 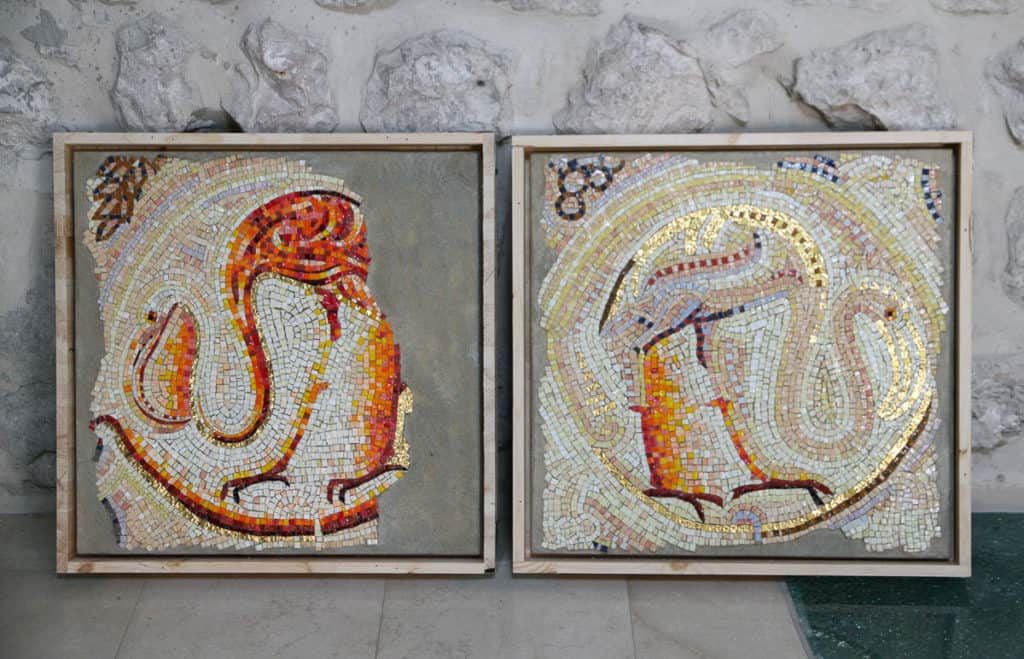 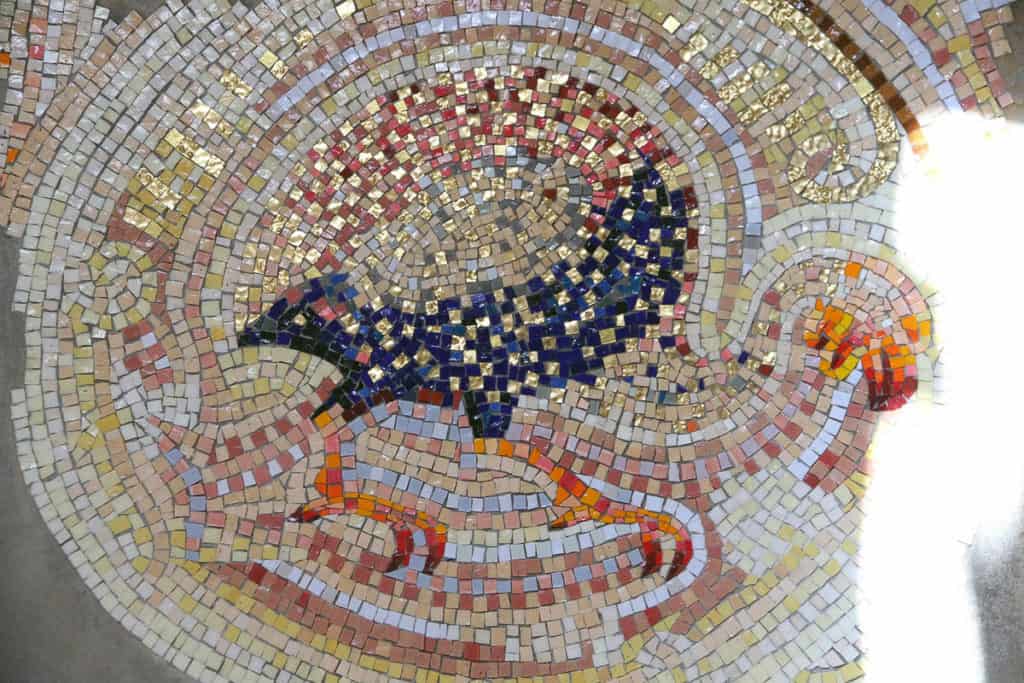 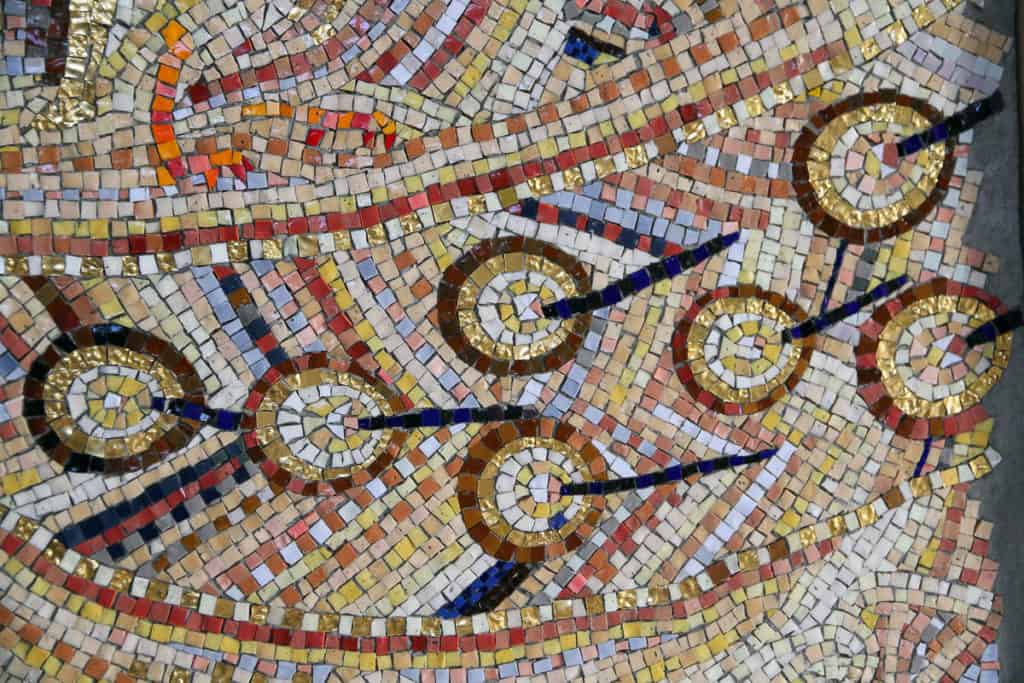 The current third instalment, Comparative Monument (Shellal) (2017), was made with two artisans, Rafat Al Khatib and Renan Barham, in the Mosaic Centre in Jericho. The centre was founded as a cooperative in 2000, in the wake of the Oslo Accords, by Osama Hamdan upon his return from studying architecture in Turin, Italy. While most of the centre’s work involves restoration funded by Christian churches, it also provides work in women’s prisons.

Aided by his studio partner, Jamie O’Connell, Nicholson developed a numbering system to enable the transposition of Waller’s colours to the original. The consequence of following this system was the appearance of artefacts in the mosaic. Knots become visible in the inner spaces of the creatures. The peacocks begin to morph into a lyrebird; the tiger moves toward becoming a thylacine.

The work is presented as though it is about to be shipped to its destination. The accompanying videos include acts of personal witness: Nicholson peruses the watercolours made at the time by Sapper Francis McFarlane, which offer a tangible connection to the moment of encounter with the mosaic; while Bedouin activist Nuri el-Okbi shows the local perspective today, offering a view of both the modern Israeli city of Beersheba and the city to which many of its Palestinian residents were expelled, Gaza.

Comparative Monument (Shellal) (2017) suggests productive ways of moving forward as a settler colonial society. Rather than presume that reconciliation can be a singular restoration of the past, Nicholson proposes a form of reparation based on a symbolic loss that acknowledges the original deficit.

Te Hosek’en Harw: The Edge of the World
Negotiating authenticity in the Jianfu Palace Garden restoration
The glittering costumes of Ningyo-Joruri: A puppetry revival project 🇯&#...
Quarterly Essay: Remembering the string figures of Yirrkala✿
"Things from before": Baskets in Gorongosa
Isifociya: The revival of Zulu adornment that protects and beautifies
Fresco comes to the mountain
Jwahr: New Iranian and Persian Jewellery