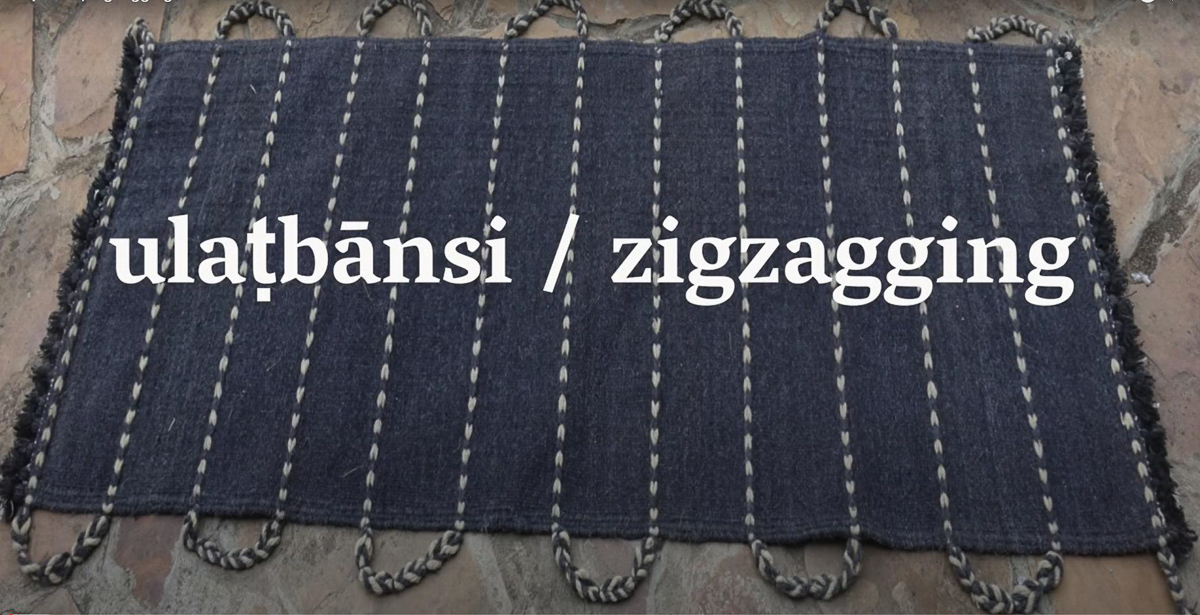 Gauri Nori explains the thinking behind the film Ulaṭbānsi / Zigzagging, in which Kutchi weavers sing and tell of the spiritual value of the handloom.

Films on/about/for weaving have always split the craft into two aspects: labor and knowledge. When one focuses on filming the various processes of the craft, the visual generally captures the visible aspects of the craft, which is the labor. This mode of representation has created a number of problems including the visual freezing of the craftsperson as a laborer whose work is primarily repetitive and physically arduous. This is also the reason why fiction films (both art and commercial, albeit from different political standpoints) use the weaver as a metaphor for the oppressed laborer. The split has also created a hierarchy between those who do and those who know and are seen as the holders of knowledge. The condition under which a craftsperson is seen as possessing both is when they are able to performatively demonstrate a mastery of both, where their craft attains the status of art, rather than science.

In an attempt to provide insights into the invisible aspects of the craft including the skill, knowledge, social relations and historical context, documentary filmmakers have sought to interview “experts” including the master-craftsperson, academic, historian, influential patrons etc. While the intent of this is that the two supplement each other, the visualized labor and the verbalized knowledge split between bodies and experts, can never merge into a seamless whole.

As a technology of representation, cinema at its essence is split: the multiple static frames that produce the illusion of movement, the two tracts of the audio and the visual, the human and the mechanical.   The apparatus of the camera is based on the abstractions of mathematical art of the Renaissance that sought to convert a 3-dimensional space into a 2-dimensional frame. To compensate for the flattening of the third dimension, a single vanishing point is used to create the illusion of depth. While the camera can mechanically produce this linear perspective, cinema produces the illusion of movement by sequentially shifting the perspective within a single fixed frame. Classical Hollywood aesthetics carried forward the sequential nature of the perspectival shift to maintain a linear narrative and a visual style that made invisible the fractured essence of cinema.

This single, linear progression of images within a single fixed frame became the dominant form of cinema and any attempts to multiply or layer the planes of representation were isolated to the experiments of modernist art. To propose an alternative, Russian formalists used montage editing which is based on the principles of the dialectic, where one image (thesis) is placed next to a wholly separate image (antithesis) in such a way that the clash between the two images produces a third image (synthesis) in the mind of the viewer. In spite of its revolutionary impetus, the montage still seeks to unite the split. Hence the essential split of cinema has been largely naturalized throughout the cinematic century.

The Penelope Project and the work of Dr Ellen Harlizius Kluck’s team recognize that diadic/axiomatic mathematics was derived from an abstraction of the practice of weaving.  This abstraction split the warp and weft into a binary: a set of opposing dualisms. Consequentially, binary mathematics from the loom abstracted into the Jacquard loom gave rise to digital technologies. The linearity of the abstracted knowledge allows for a simplified, codified form to emerge that can be explicitly expressed. Here, Dr Annapurna Mamidipudi’s research has found that the knowledge of weaving has been split into this abstracted linear form (termed explicit knowledge) and the complex embodied form (tacit knowledge). Explicit knowledge has assumed a certain authority over tacit knowledge just as the aforementioned split between knowledge and labor created a hierarchy between the two. This has real world effects, especially for handloom weaving communities extant in the Global South. These hierarchies have created inequalities within the livelihood of weaving, perceiving it as embodied labour rather than scientific knowledge, and has threatened its existence. The Penelope Project seeks to expose the problems of adopting a purely metaphorical understanding of weaving and Dr Mamidipudi’s research points to the issues caused when the body is elided from the praxis of weaving.

Handloom weaving offers some insights and a possibility for a way forward. In the practice of weaving, the warp and weft are not a set of opposites. While the warp may be fixed on the frame of the loom the weft is continuously moving in a zig-zag manner. The thread of the weft in a handloom passes through the warp and then makes a u-bend to pass back in the opposite direction. On the other hand, in the automated Rapier Jacquard loom the thread of the weft is cut so that the horizontal lines are separate from each. The weft of the handloom creates a zig-zag pattern which seems to be going back and forth but actually is going forward. In the Rapier loom the warp and weft can be considered opposites in the way that the vertical lines are placed in opposition to the horizontal lines. But in the handloom, the vertical lines offer the frame and the horizontal lines of the weft are actually one continuous loop or weave in this back and forth, zig-zag manner. A third dimension exists in the mind and body of the weaver as she makes her decisions in the third dimension, deciding which threads to pick to make patterns. When instead, one abstracts the warp and the weft into a binary we have instead flattened out and lost the third dimension as it were. Moreover, by reducing weaving to the abstracted code and hence removing the weaver from the equation, automated weaving simply materializes a fixed code. The embodied knowledge of the weaver is a crucial third dimension that cannot be abstracted out of the equation. 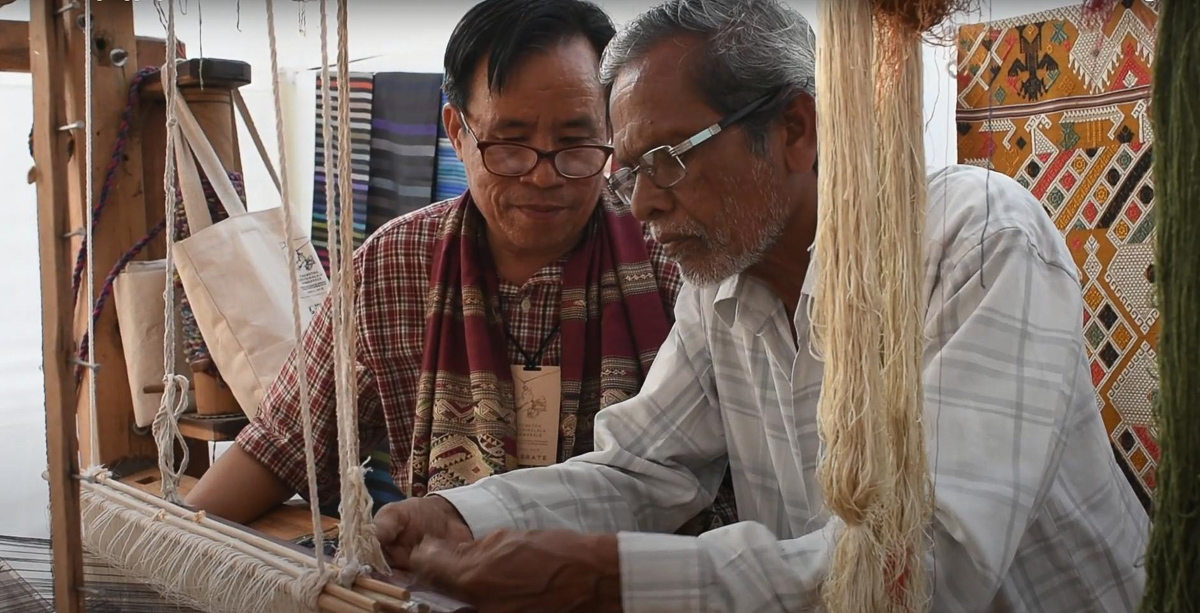 Our attempt to film weaving is aware of all the splits, fractures, hierarchies, multiplicities and losses that are involved in both processes. However, neither of the filmmakers are weavers and cannot attain proficiency within the period of the project. Using the zig-zag approach, we decided to film weavers who are able to traverse multiple registers. Previous attempts to get weavers to verbally articulate their understanding of the practice was limited by the impossibility of trying to convey an embodied practice through words.

In the zig-zag approach, we approach weavers who are able to proficiently speak about weaving through another register. For instance, we spend time with Narayanbhai’s troupe of weavers in Kutch is sing the songs of the Bhakti weaver/poet Kabir. The songs use the embodied knowledge of weaving to map out a spiritual and social practice. Their understanding is so deeply embedded in the embodied practice of weaving, music and spirituality that a dialogue between the registers already exists. 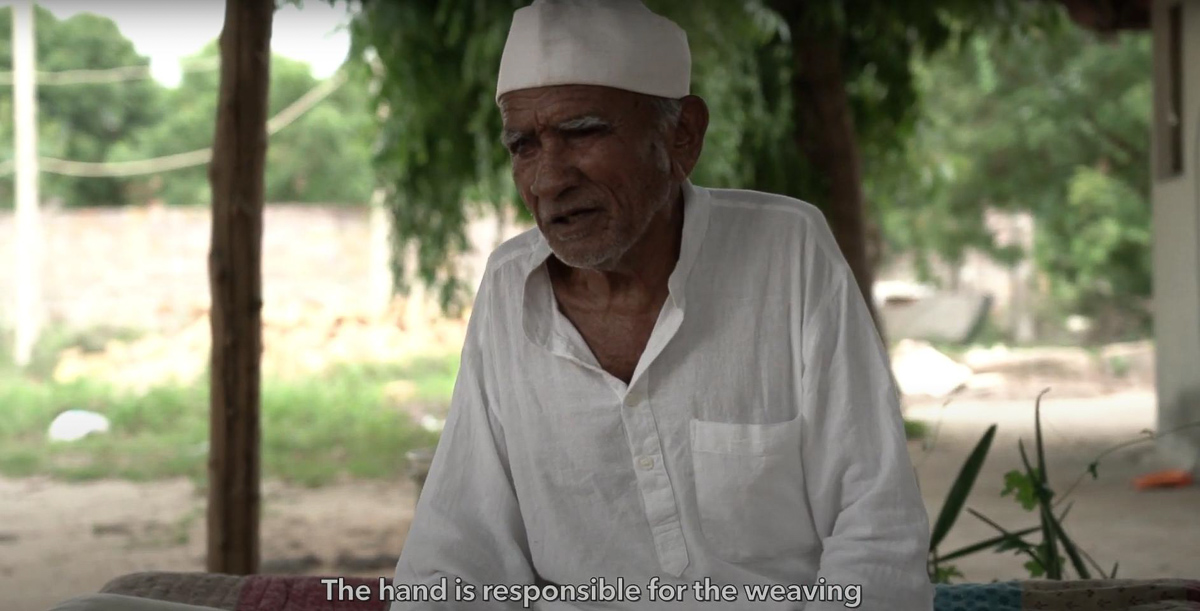 Similarly, Dr Ellen Harlizius-Klück’s ability to traverse between weaving and mathematics offers a possibility for deeper insights. We feel confident that this approach is appropriate because, during the week-long conference Innovating Technological Cultures in Craft and Handloom Weaving in Chirala, November 2018, Dr Ellen witnessed the Laotian master Chanhsouck Phommalin recreate his complex weaving technique on a simple frame loom and consequently found that a pit loom weaver from Chirala, Bandaru Gangadhara Saibaba was able to learn the former’s code without the use of one word between the two. The power of crisscrossing between registers is missed by the linear modes of thought and articulation because it is seen as inefficient. But if we are able to grasp the strength that this mode of crisscrossing between registers produces then we can no longer deny the value of all that is elided in the conventional representations of weaving. Our attempt to film weaving is not an attempt to unite the split but rather to weave across it.

Read more about the legend of Ulaṭbānsi here.

Gauri Nori is a member of Handloom Futures, a collective that supports cooperative societies and weaver unions to participate as experts in research, policy and advocacy. The film Ulaṭbānsi / Zigzagging was commissioned by the PENELOPE project housed at the Research Institute for the History of Technology and Science at Deutsches Museum, Munich, and is funded by the European Research Council (ERC). The hypothesis of the PENELOPE project is that there was a significant contribution of textile technology involved in the advent of science in ancient Greece. Visit looms-in-motion.eu.

Ayudha Puja: Time to thank the things on which we depend
In search of the keys: The chola regional over-garment, from the mountains of Hi...
Barbara Mullan: A life with Gujarati textiles
For the love of Lao - Studio Naenna
From Isan to Paris with silk and water hyacinth
Ainu textiles: Cloth weighted with affection and prayer 🇯🇵
Wissa-Sophy: Back to the woven garden
A semiotic thread: Maya Traditions Foundation's Textiles Tour in Guatemala