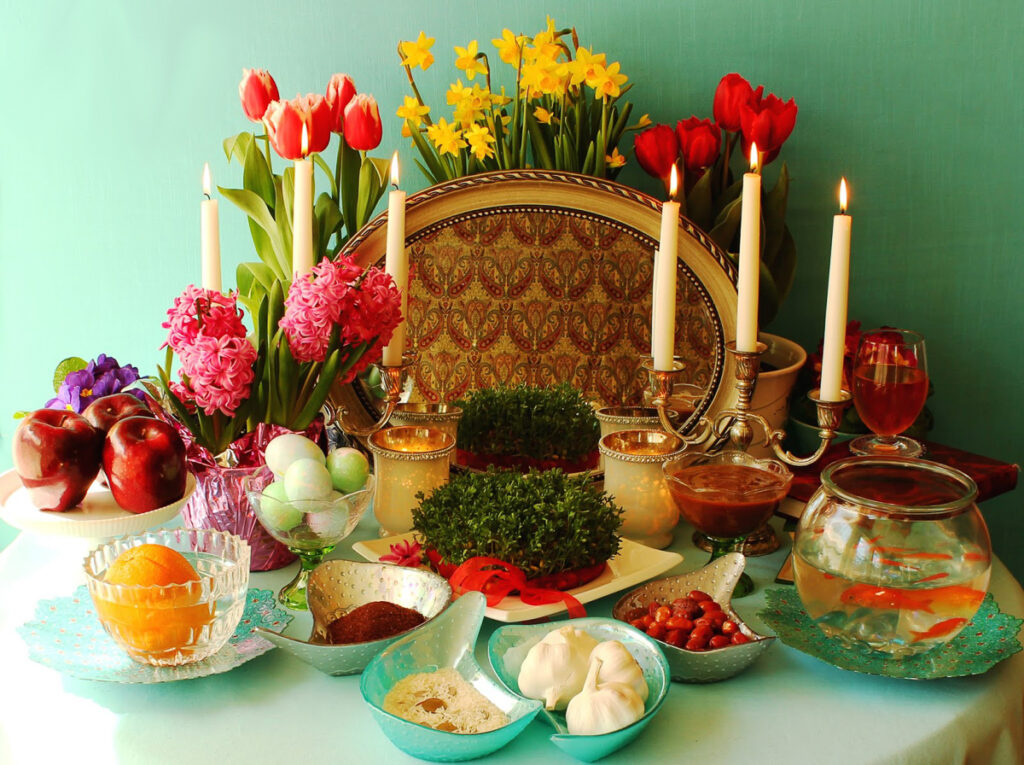 Peyman Samandari digs through the layers of history behind Nowruz, the Persian New Year, which keeps Zoroastrians spirit alive.

Nowruz is the most important Iranian tradition and the largest annual celebration of the people living in the cultural and civilizational sphere of the great Iran which is celebrated every year at the beginning of spring—at the moment when the earth enters the vernal equinox. Nowruz is celebrated on the occasion of the end of the cold season and the beginning of the period of reproduction when nature is renewed and the working season begins, especially farming. And today, as in the past, it is celebrated with special joy and respect in Iran and beyond. In terms of astronomy and astrology, at the beginning of Nowruz and Farvardin, which is approximately equal to March 21st in the Gregorian calendar, the earth enters the constellation “Ram” or “Aries”. 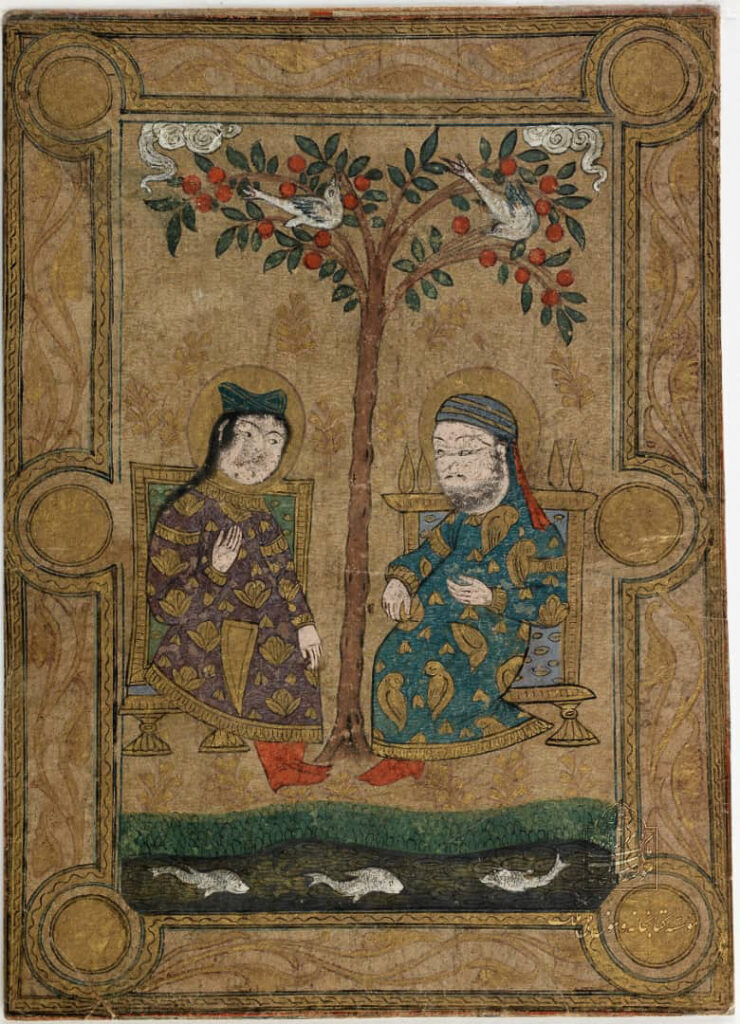 Picture of a man and a woman sitting by the water, Seljuk period, Location: Malek National Library and Museum – Tehran, Iran

In Iranian mythology, Nowruz is attributed to the time of one of the mythical kings of Iran, Jamshid Kiani, who founded this tradition at the end of the completion of the six stages of the creation of the world. According to the evidence, many date the celebration of Nowruz to about eight thousand years ago. The word “Nowruz” is derived from the Pahlavi language, which was the ancient language of the people in Iran. In the stories, Nowruz is considered to coincide with many events, but some of them are associated with myths.

The month of Farvardin, and especially the days of Nowruz, is the time to celebrate “Fravahars”; Fravahars are the holy spirits of the dead of every family that according to the ancient Iranians, on the eve of Nowruz, return to earth from the heavens to visit their families. In honour of the presence of these very dear guests, who carry the Spirit of God with them, Iranians clean their homes and surroundings. Traditionally, Iranians on the night before the last Wednesday of each year, known as “Chahar-shanbe Suri”, light a fire on their roofs to guide and respect these spirits to reach their homes. Iranians believed that the contentment of these spirits from them would have a positive effect on the life of their family members in the next year and causes blessings and solves their problems with the help of God.

Every day of Nowruz is a sign of one of the months of the year and symbolises each of the angels and gods revered by Iranians. The thirteenth day of Nowruz, known as “Sizdah-be-dar”, is dedicated to touring nature to remove its cosmic wickedness and chaos from people, just like a five-day month at the end of ancient Iranian calendars. The first day of Farvardin is also called the day of “Hormozd” (Ahuramazda) who was the greatest god of gods.

Nowruz was respected even more before the Iranians converted to Islam. On the thirteenth day of Nowruz, Iranians clean the house, put on new clothes, eat a variety of sweets and fruits and nuts, visit relatives, and plant plants.

It has long been a custom for people to sow the seeds of some kinds of valuable and edible grains such as wheat, barley, corn, rice, lentils, and beans in their place of residence on the eve of Nowruz. And each grew better, accounting for the largest share of that year’s crop. Another ancient custom, mostly devoted to kings, was the release of prisoners and the forgiveness of sinners. Theatrical traditions such as Mir Noroozi, Haji Firooz, the bald man and the beardless man can also be mentioned. Along with this poetry reading and especially “Nowruz reading” and singing happy poems and spring songs accompanied by singing and dancing is one of the permanent features of Nowruz celebration. 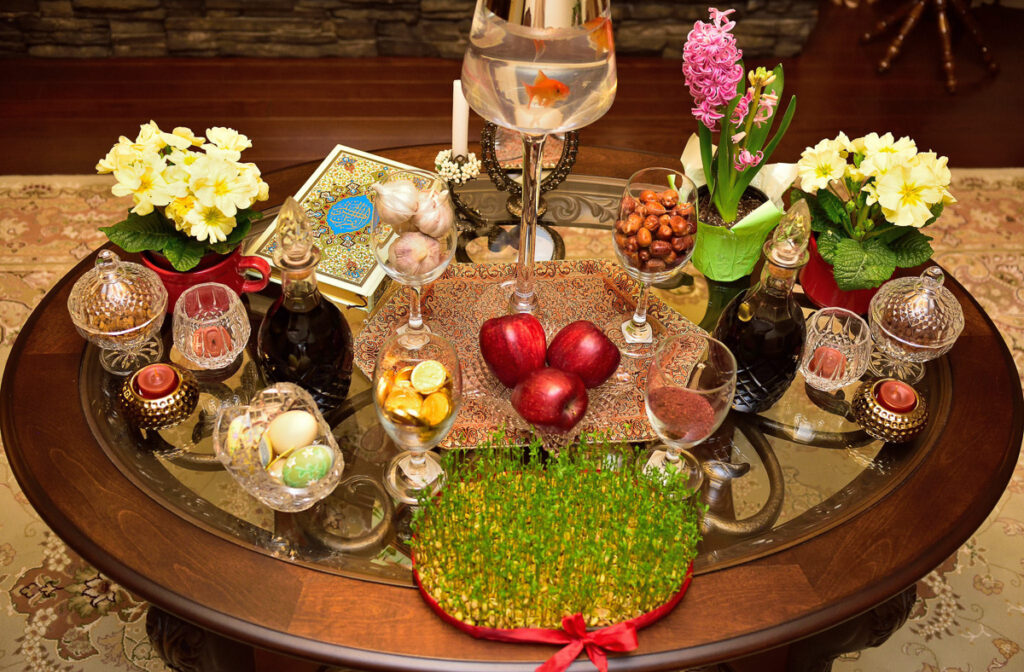 The spread of “Haft Seen tablecloths”, which is the main symbol of Nowruz, is one of the most important rituals that has been celebrated to this day. On the Nowruz tablecloth, in addition to the holy book, which in the past was the Avesta (Zoroastrian book) and today has been replaced by the Qur’an, there are mirrors, candles or lamps, different kinds of sweets and drinks and nuts, fresh fruits, flowers and green plants, a container of water and so many other things. Everything that was placed on the Iranian Nowruz tablecloths had an earthly or celestial sign and symbol.

All this shows that Iranians have always cared about moral and human virtues, they respect them and strive to achieve them. Iranians have carefully calculated the exact moment of the transition to the new year for centuries, and they spend this moment in a spiritual silence while reciting a prayer which is somewhat different from the New Year celebrations of many other cultures.

Since 2010, Nowruz has been inscribed on the list of intangible human heritage as the largest multinational heritage in the world to date, as a common heritage of the lands that celebrate Nowruz.

Peyman Samandari is a Master of Iranian Studies Orientation and people’s culture and cultural heritage. He is also an expert of Malek National Library and Museum, Tehran. Translator: Darya Golestani