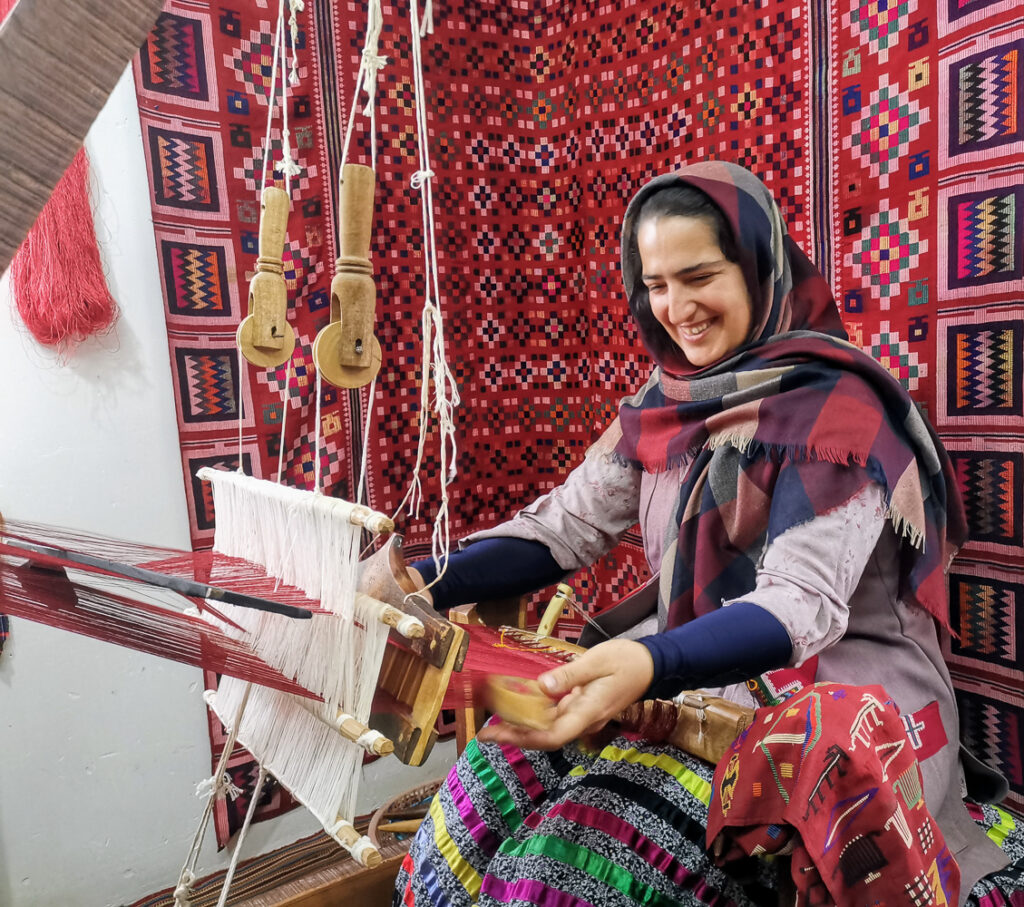 Our June laurel goes to Shohre Fakhrejanali, a weaver from the village of Qasem Abad in the Guilan province of Iran, on the Caspian coast. Khosro Mahinroosto tells her story.

“My mother is my teacher. I learnt so many different kinds of weaving patterns from her and I am still learning”.

Shohre was studying law, but she decided to stop. Reason why? Actually her family house is substituted instead of university. This kind of art is not something that anyone could learn in University: she said. There are lots of patterns and motifs that mother and daughter create during weaving. 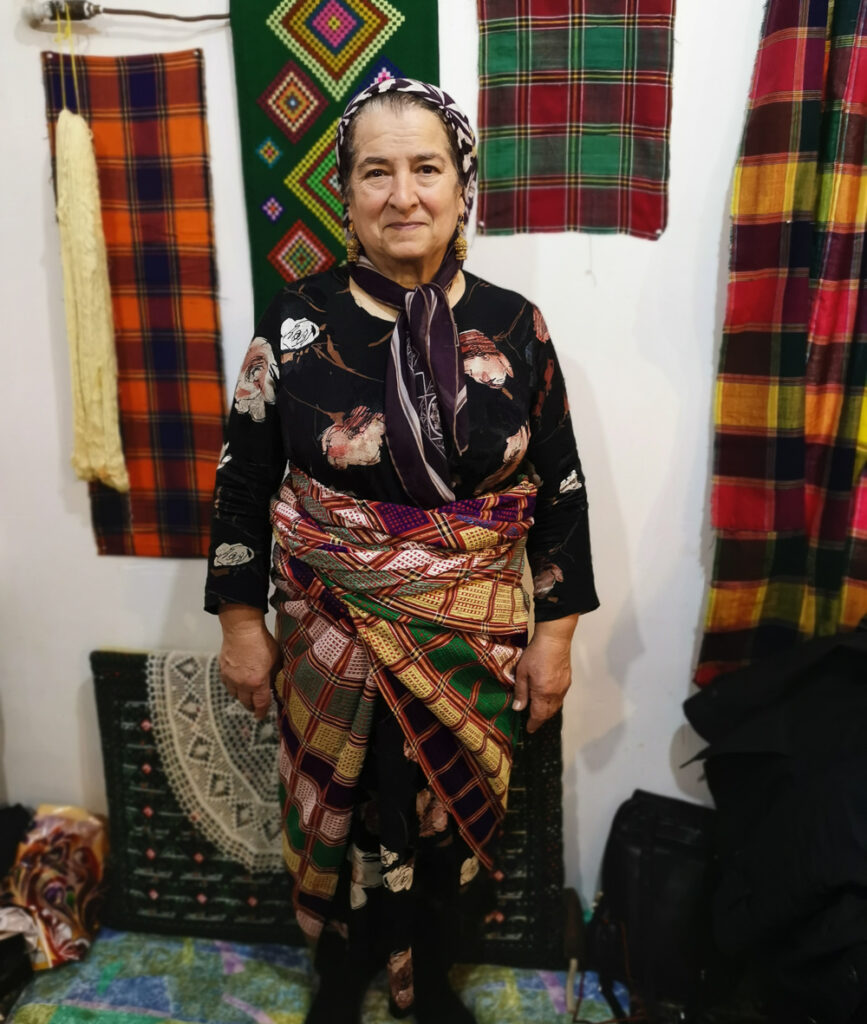 How the chadorshab is worn. 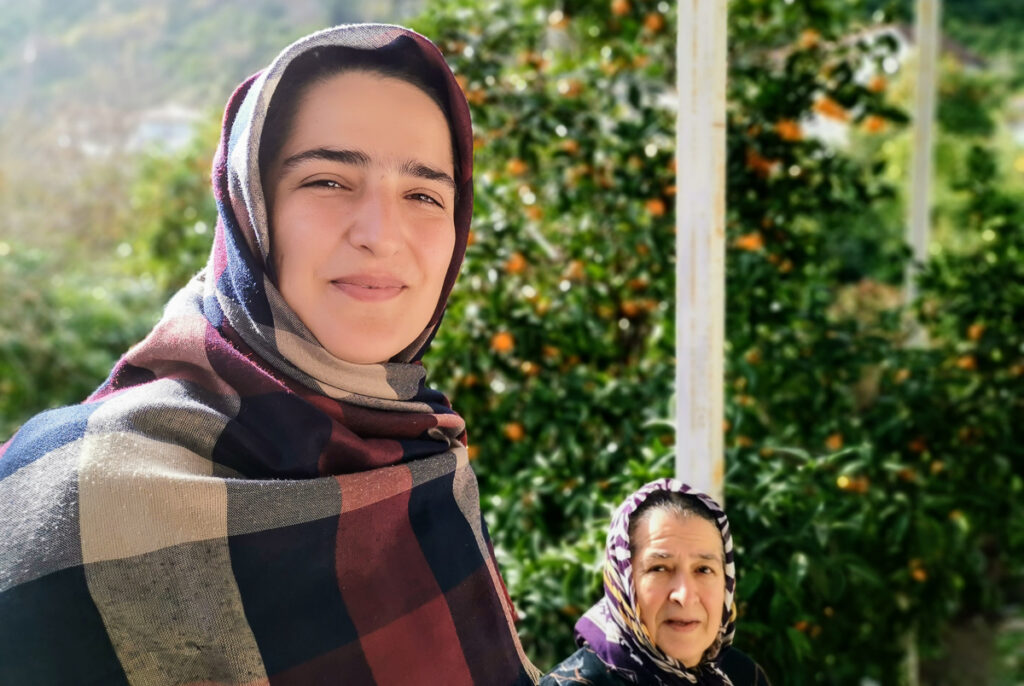 Shohre Fakhrejanali and her mother with orange trees in the background. 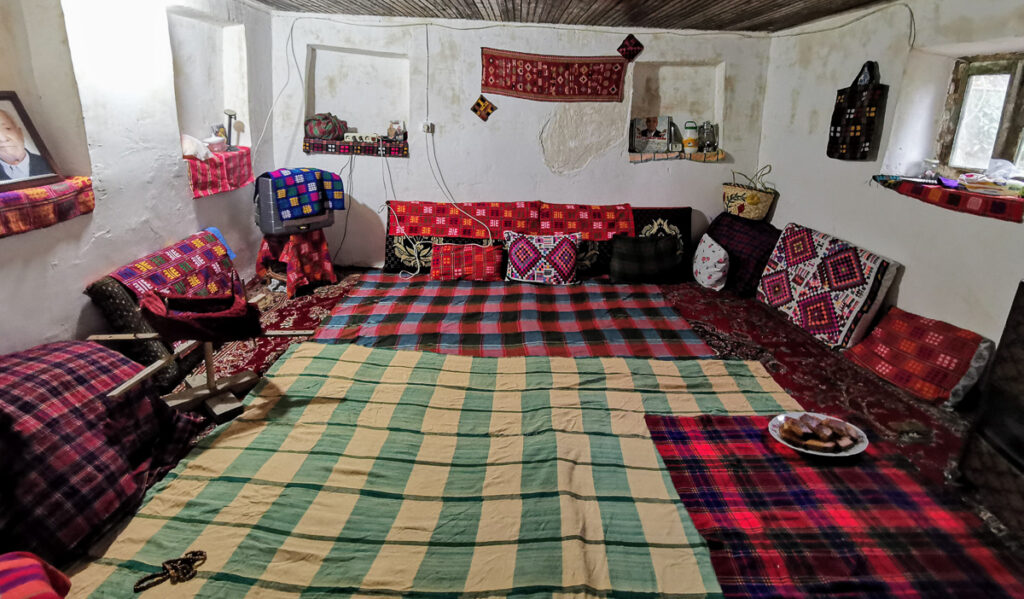 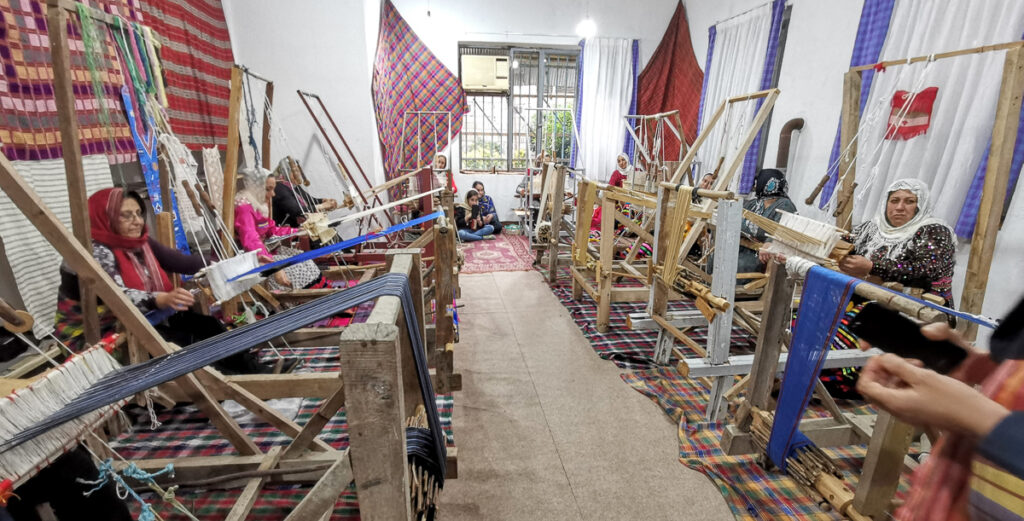 A weaving studio in Qasem Abad

At first glance, it seems like needle working, but it is completely different, it is chadorshab. Traditionally that fabric was silk, but during recent years acrylic fibre became more popular.

Shohre started a group of young girls who like to weave together and create new chadorshab products. She and her group are trying to create textile again from silk fabric. There are more than ten women and girls.

Shohre is always busy with designing, while other girls and women do the weaving. She helps others to know their culture and philosophy of motifs in which every pattern has its own special story. The history of some kinds of pattern go back to nearly 3000 years ago and they are still repeated without any changes. She said these motifs should be fixed to protect the culture. Her group is working with other tailors in order to use the old pattern in new style clothes and dresses. She said all these combined works are done to protect Guilan culture and to encourage young people to understand the importance of indigenous art.

What makes chadorshab weaving different from other types is that every pattern should be woven in reverse. It means you should imagine the shape in a mirror and then create it. So whatever the shape is complicated, weaving would be more. The width of chadorshab weaving loom is fixed at around 30 centimetres, so if you want to have wider fabrics you should make more small ones (strip) and sew them together. Now consider you want to have a general fabric which for example six strips of chadorshab are necessary. The first strip should be symmetrical with the sixth, second with fifth and third with forth. It means weavers not only should pay attention and imagine the pattern like in the mirror during weaving but also at the same time should have its symmetrical pattern in another strip. Ultimately this makes Chadorshab-bafi a complicated art which is said only women are able to do. And it is really a fact, because you can’t find any man in the village to do that.

Part of the textile to be wrapped around the groom.

Designs include many patterns. They depict objects such as combs, birds, frogs, trees, while complicated ones include like the motifs of female symbolism, fires or the reflection of the sun or moon on the surface of Caspian sea, which is named oribma.

Textiles are used for clothes and covers, especially while working in the rice paddies. Recently Shohre has tried to encourage girls to develop patterns in combination with other handicrafts like bags and shawl.

Like the other people in the village, Shohre is working at home. She told us it is the best time to read more about the village history, culture and thinking more about the environment. She said like our ancestors, we should pay attention more to nature. “Solution is in nature and we should only listen to its message.”

The village of Qasem Abad was recognised in 2019 as a World Craft City for Chadorshab, a woven waist wrap. This wrap is important for work in the fields, such as tending the rice paddies. But it also serves a critical function in supporting the backs of weavers themselves, making it a circular arrangement of weaving the textile that helps the weaving. Her workshop attracts many craftspersons from overseas.

A masterwork is a chadorshab made for the groom, who is wrapped in a textile that contains an encyclopedia of motifs, such as an acrobat, pine tree, shuttle, dog, boat, tool for weaving fishing net, goat, salt, chandelier and chest for rice.