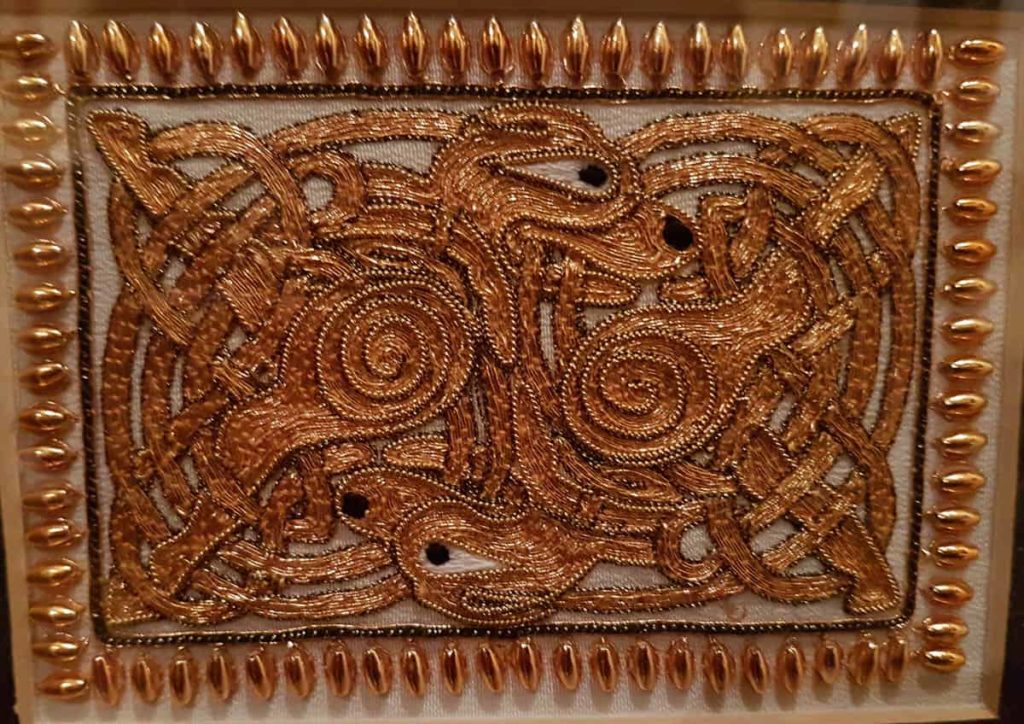 Garland brings you occasional works of note. This recent embroidery work by Lesley Uren is based on designs from an Irish monastery.

Lesley Uren’s embroidery is renowned for its fine gold and silver metal thread work and her favoured motifs of native Australian flora and fauna Uren is a senior statesperson of the embroidery world having attained the Diploma of Needlecraft in 1957, being a founding member of The Embroiderer Guild Victoria and honoured with an Order of Australia in 2013 for her services to the arts and crafts and as an educator. Her work has been the subject of a solo exhibition at the Castlemaine Gallery, Victoria (2003) and at the Buda Historic Home and Garden at Castlemaine (2014).

Lesley Uren is an experienced embroiderer and teacher of the art, training initially at the Emily McPherson College Melbourne (RMIT University) and later took short courses in London at various institutes including the Hammersmith College of Art and Design and the Embroiderers Guild. She was granted an OAM for the art of embroidery and education in 2012.

She has exhibited in most states of Australia, in New Zealand, the United Kingdom and the United States of America. Her embroideries are represented in collections in those locations and in Europe and Africa. She is a founder member of The Embroiderers Guild (Victoria) and has been active in that association for the past 57 years, culminating in her teaching a two year master class in metal thread work.

Lesley specializes in large hangings of gold or silver metal thread work while incorporating a variety of other creative or machine techniques. The majority of her pieces interpret Australian sea life, wild life, wild flowers or use inspirational ideas gained from travels.

She has undertaken many ecclesiastical vestments and altar frontal commissions, including the stoles worn by the Reverend Davis McCaughey for the inaugural service of the Uniting Church in Australia, vestments for St Josephs Church Malvern, altar frontals for St David’s Cathedral Hobart, pulpit falls for several churches, a hanging for the Camberwell City Council, incorporating their coat of arms, school banners, the Templar Journey hanging and taken a leadership role or been involved in many group projects.

Thanks to Holly Barbaro and Louis le Vaillant for this material. Lesley’s work can be seen at the Animal Kingdom exhibition at the Johnston Collection.