Annette Fitton has yarn-bombed Australia’s iconic fauna and unleashed a mob of laced roos on the Italian town of Trivento.

“My mob represents Australia with its unique wildlife, mixture of culture and freedom to dream. A country where creativity and artistic expression is supported and encouraged. Street Art blooms here. No formal training or certification is required”.

Annette Fitton’s life as an artist has taken her—and her creations—many places, but none perhaps as picturesque as the Italian village of Trivento, where her mob of lace-covered kangaroos took part in the town’s Yarn Bombing Day.

Hand-crafted creation is in Annette’s blood. Her education as an artist began at home, where her parents and grandparents would devote their spare time to an overwhelming list of projects: “making and renovating furniture and homes, gardening, baking, sewing and mending clothes and curtains, embroidering, fossicking for, polishing and setting gems, knitting, weaving, drawing, painting, singing and whistling.” By the age of four, she was already knitting, and she taught herself to crochet as a teenager. She can pinpoint the moment her knitting adventure really began: she bought, modified and knitted Jenny Kee’s jumper kit, which was commissioned by the Australian Wool Corporation. Later, when she was studying in Stockholm as a furniture maker, that cardigan’s distinctive design and colour palette provided a bridge back to Australia.

Now well-entrenched back in Melbourne, Annette showcases her eclectic creations under the name Nini & Wink, with local galleries like Clan Collective often playing host to her finished designs. Her passion for yarn bombing first took her to New York, accompanied by a group of lace-adorned pigs. Annette traced her growth as a yarn bomber in detail when she wrote to me:

“In 2010 I was given a copy of Yarn Bombing the Art of Crochet and Knit Graffiti by Mandy Moore and Leanne Prain.

“Two years later, I answered a call-out to the community for contributions to a woolly banquet with knitted or crocheted food at a local gallery. I met the group, primarily crocheters, who had yarn bombed the main street and joined it. Over the next three years, via many projects large and small, I experimented with knitting, colour and form, bringing new life to old techniques.

“By the time Yarnbombing Trivento started sending out invitations to join their International Yarn Bombing Day 2019 my folio of street art on social media had attracted their attention, and one of eighty invitations to contribute to their event arrived in my inbox.” 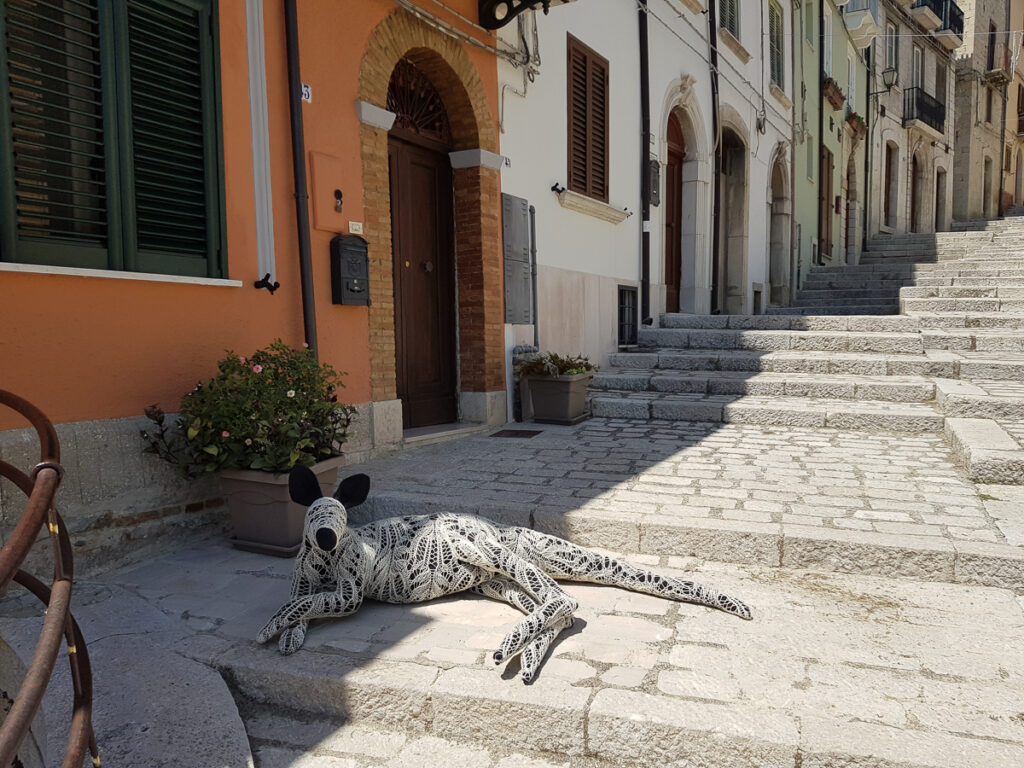 The Yarn Bombing Event in Trivento re-designs the streets of the beautiful village. The yarn-based street art of artists from all over the world are sprinkled across window frames, drainpipes and stone-cobbled steps. A visitor will weave their way through installations, markets, and workshops run by some of the artists.

“What, easily recognisable as Australian, would make the most impact and give everyone something to look and talk about? What could I take to a small ancient hilltop town in Italy?” Annette wondered.

She settled on the idea of a mob of kangaroos—christened Mel’s Mob for their birthplace, Melbourne—and set about bringing them to life. She knew she had to draw on all of her experience to ensure the kangaroos would find a new home amongst the hills of Trivento.

“Since I made replicas of a free-standing toilet to yarn bomb, I’ve known if I can make it, I can yarn bomb it. Travelling to Trivento on planes, trains, buses and cars, I’d have to limit my luggage to one 20kg suitcase plus a small carry-on bag. My idea of making and yarn bombing forms, to travel empty and be stuffed into shape at their destination, gave me a reason to believe I could possibly fit Mel’s mob of seven ‘roos, modelled on the Eastern Grey, all in that one large suitcase.

I researched kangaroos, noted the points that made them recognisable and set about making a mob of seven individuals. I used recycled upholstery, fabric, old jeans and recycled material from a previous project to sew the forms. Five of them have zips in their undersides and bamboo sticks in their legs and feet. The standing joeys have coat hanger wire for extra support and are stuffed with worn-out socks and undies.”

A few months later, Mel’s mob were reclining casually on the steep steps of Trivento, and it was fair to say Annette’s delicate operation had proved a success. The kangaroos proved a hit on social media. Annette’s mastery of lace knitting patterns—those which adorn the bodies of the kangaroos—are largely behind the visual beauty of her designs.

“The effect lace produces, relative to its economy of material and effort required to make it, is outstanding,” Annette told me. “I knit lace using heavy thread and large needles, finding at this scale its patterns retain their delicacy and can be seen from a distance. Stretching white lace over a black background and making careful consideration of the orientation of the pattern enhance both the lace pattern and the form of the object being covered. My mob is covered in hand-knitted lace made from pure Australian recycled and leftover woollen yarn.”

At the time of writing, her kangaroos are guests of the Australian Textile Art Award in Melbourne and are due to be featured in Sydney in the mid-year Festival of Lace. Of course, the pandemic-enforced lockdown means many will miss out on seeing her works in person. The Yarn Bombing Trivento Facebook page itself recently issued a call-out for followers to share from their “virtual balconies” what they are working on during this difficult period.

Annette is still powering on, with more ambitious yarn bombing projects planned for the year ahead. The streets of Trivento do seem more than half a world away amid the recent border lockdowns and flight restrictions. For now, quiet in-home workrooms, like that which brought the world Mel’s Mob, will have to do. 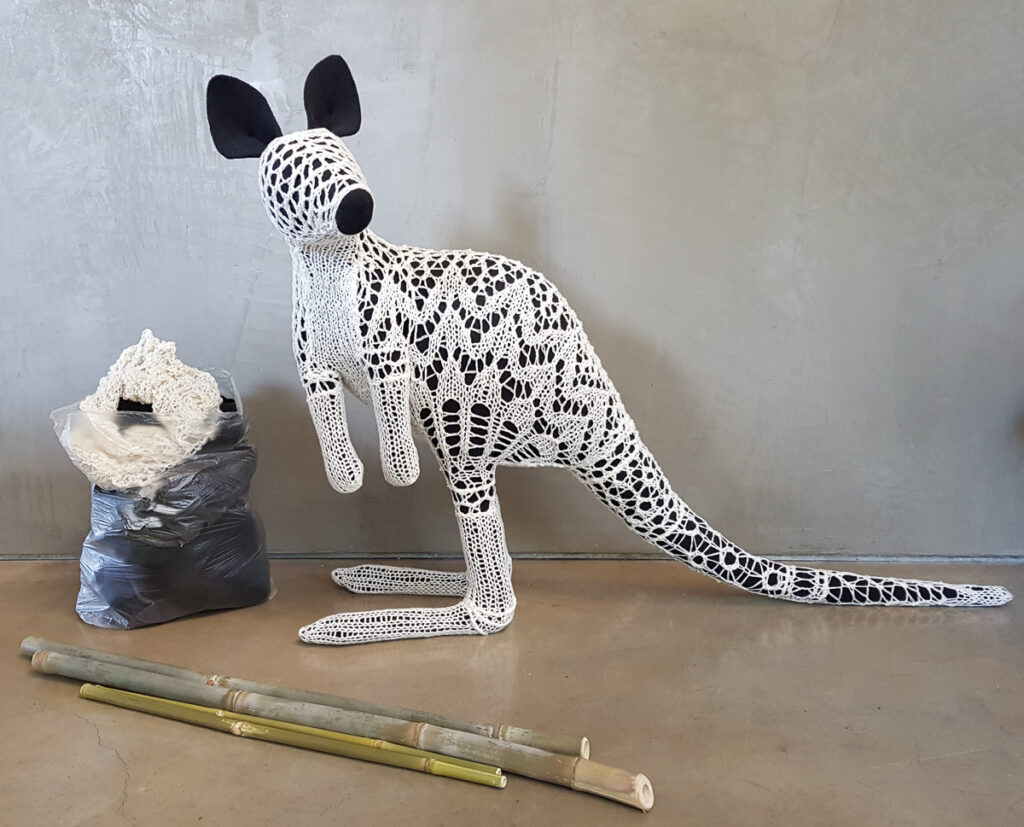