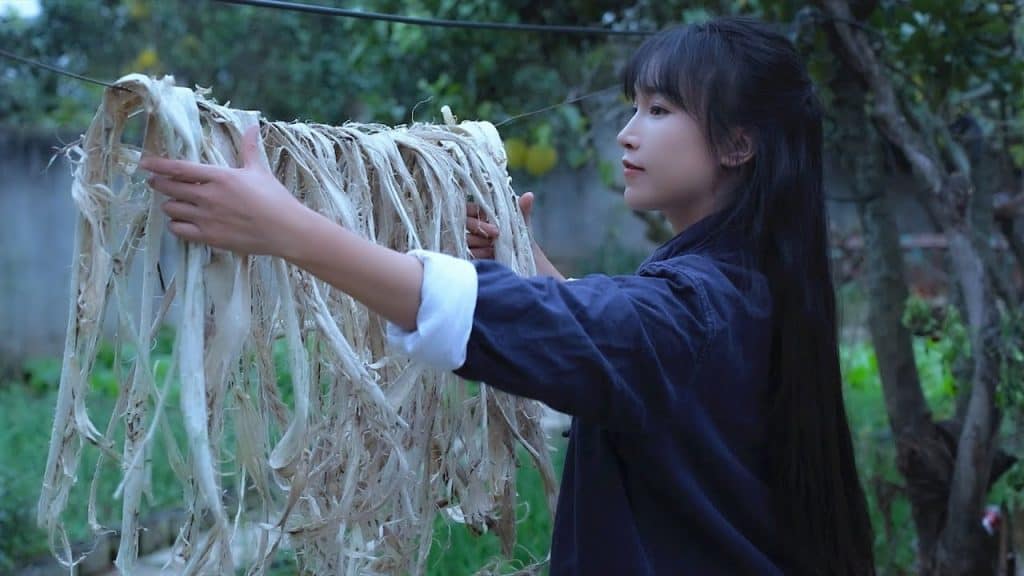 The story of Liziqi tells us much about the wave of interest in China’s traditional culture today.

This young video blogger left the city where she was DJ’ing to return to Sichuan and live with her grandmother who needed care. While there in 2016, she started making videos demonstrating traditional skills in preparing and cooking food and crafts. Her culinary skills include making peach blossom wine, watermelon cake, and traditional Sichuan moon treats, while the craft techniques include dying clothes in grape skins, making shoes for her grandmother, embroidery or building a wood-firing oven out of clay. She now employs a production team, as is evident from the quality of her videos.

She has become a Weibo phenomenon. She has 18 million followers and there are more than 40 topics about her, one of which has 720 million views and 68,000 discussions. But her fame extends beyond China and her YouTube channel has over six million followers. There’s a Weibo thread dedicated to translating the English comments on YouTube.

Garland sought some quotes from university students to understand her appeal. Here are some examples:

Yang Xin: “She is very outstanding, and I will continue to follow her.”

Wu JIayuan: “Li Ziqi knows so much that I always think she can show you something different in the next video, so I will always look forward to her new video. Watching her making things is a kind of enjoyment, I can see she is not only leisurely but also busy for her loving life. I find slowing down is an interesting thing from her, and I will absolutely keep following her.”

Li Yinghong: “People who live in a busy world long for a simple life in nature. The little sister Li Ziqi is gentle and good-looking, and her videos make people back to a simple and interesting life. The most attractive thing to me from Ziqi is her spirit of always willing to learn. People can “have no idea”, but can not give up learning. Ziqi really lives out her own life with continuous progress. One issue is about her study of Shu embroidery. She has devoted herself to traditional culture. The deposit of a needle and a line represents not only prosperity but also persistence and exploration. Chinese zither, chess, calligraphy and painting; Chinese brush, ink, paper and inkstone; embroidery ornaments; skin embellishment; jade and porcelain; all these things are ancient gentlemen’s favourite things, which now are learned by herself step by step. I can see that her videos are really done very seriously, so I will continue to follow her surely.”

Shen Yunfeng: “The long-term success of Li Ziqi comes from the output of excellent values and the quality of products. Li Ziqi’s rural life is exactly the concept of being out of the world and living simply advocated by Chinese people for thousands of years. In the minds of netizens, it is Li Ziqi who has fulfilled their dream of escaping from the pressure and tedious life. In addition, Li Ziqi actively responded to the call of cultural self-confidence and cultural renaissance and promoted the excellent traditional Chinese culture, which was supported and encouraged by the government. Her fame is not accidental but the accumulation of cultural deposits, which is a life that people yearn for but can barely get. She lives up to the lifestyle in the poem “picking chrysanthemum under the east fence, leisurely see the south mountain” written by Tao Yuanming in WeiJin Dynasty. She is excellent but not publicity, beautiful but not commercial.”

Song Xiaoying: “I followed her because sometimes I yearn for the ancient life but cannot get it. However, Li inherits and spreads the ancient culture, and employs an excellent behind-the-scenes team to turn the rural life into art, with beautiful music and a positive attitude towards life.”

Zhao Haoyu: “I often watch Li Ziqi’s videos, which are a kind of idyllic poetic life of Wang Wei. The reason that I like her video is, if I lived such life every day, thinking carefully, I could actually be bored, but her videos just fulfilled my yearning to that kind of life. A lot of people in my hometown are now rich, having nice houses even with gardens, but they seldom live there, instead still struggling in big cities — the countryside is great, but in a way, it reflects the monotony of life. Every one of us has had the dream of a paradise. We have dreamed of being an immortal one day when we would have a sense of detachment between the natural mountains and rivers. Li Ziqi’s works seem to create a paradise for us.”

Zhao Yufei: “The reason I like Li Ziqi is: Nowadays time goes by so quickly that we yearn for Li Ziqi’s lifestyle. And her hands-on ability is very impressive. This girl is not only able to cook well, but also good at making all kinds of fruit or melon brew wine. She is a handy person and beautiful lady.”

Jiang Xiaonan: “Li Ziqi is really unpretentious and unworldly. Her video has not only ornamental value but also communication value. The number of broadcasts abroad has exceeded 10 million, allowing more people to understand our traditional Chinese food culture. Each shot in the videos looks like a picture, telling us the life can turn out to be so beautiful away from the hustle and bustle of city life in the form of video. She makes videos seriously and attentively with a unique style and making audiences very relaxed. She tells us how precious the family time is, and how peaceful the quiet and simple lifestyle is.”

Her video of making Shu embroidery shows her dedication but also the role of the master in correcting the young student.

Liziqi has inspired imitators, such as the less clamorous Drunkard Lee. And, of course, you can by her products in the Liziqi Shop.

Thanks to Echo Ban for collecting student responses from Qingdao University of Technology and Xue Xia for the research.

Finding Mahtab and starting a new life
Kinder, Küche, Kirche ✿ New mementos of the Barossa
He stood up! ✿ Winds of change at the Ancient Now symposium
Song brocade: The lost past and the promising future in Chinese crafts
Pulp Friction: A paper trail from China
Rong Design Library ✿ Deconstructing craft for design
New Spring, Old Gods: Adornment for the people of the bear
Dawn Beasley ✿ On a slow boat to Jingdezhen