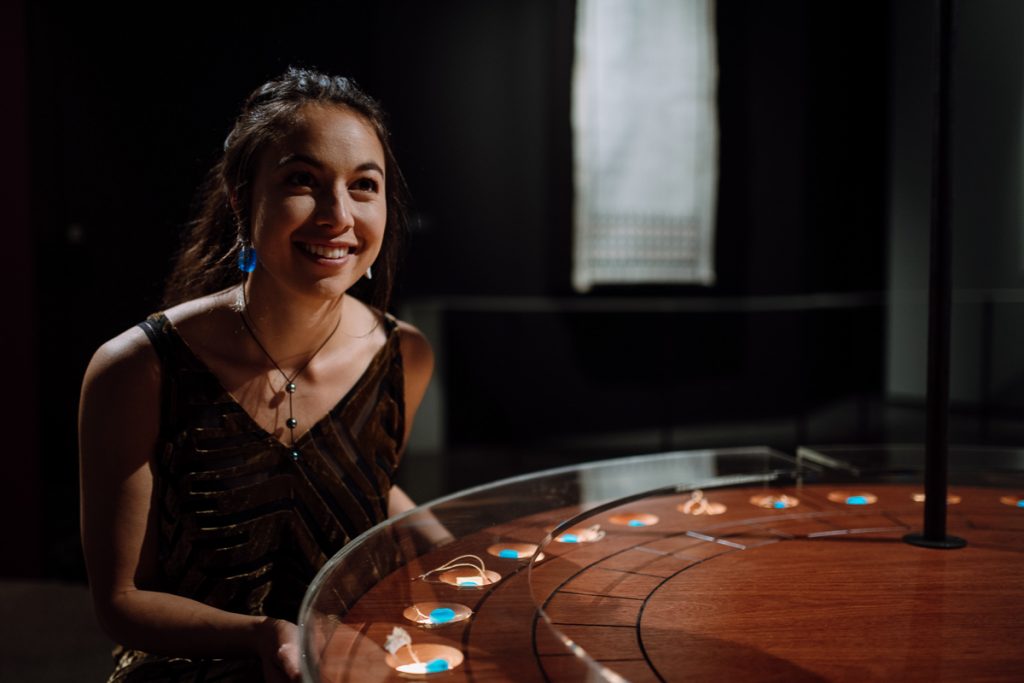 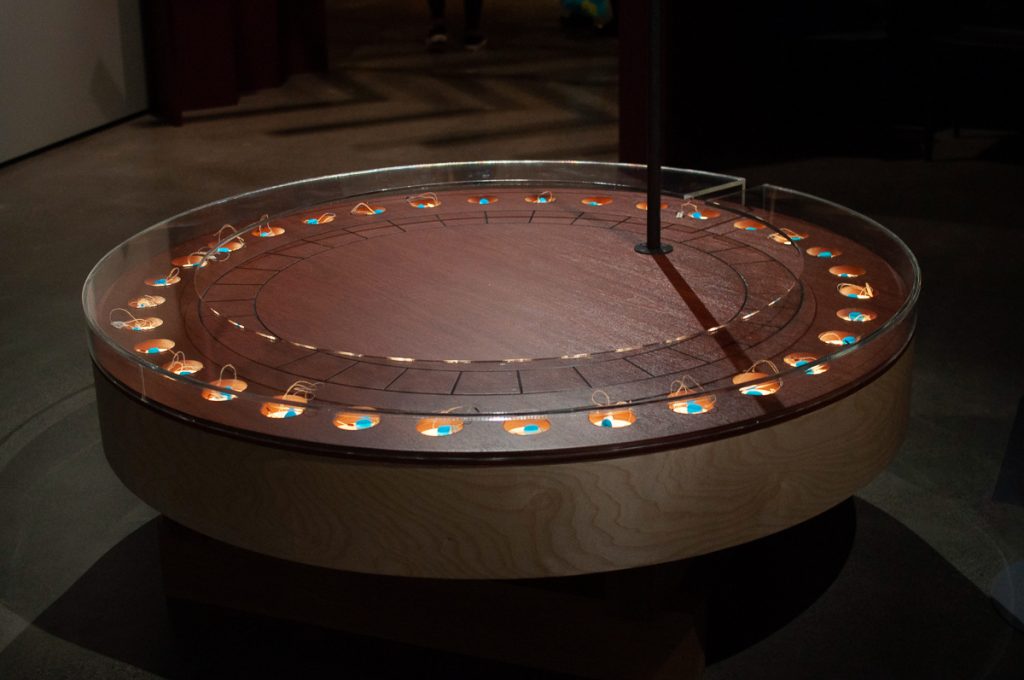 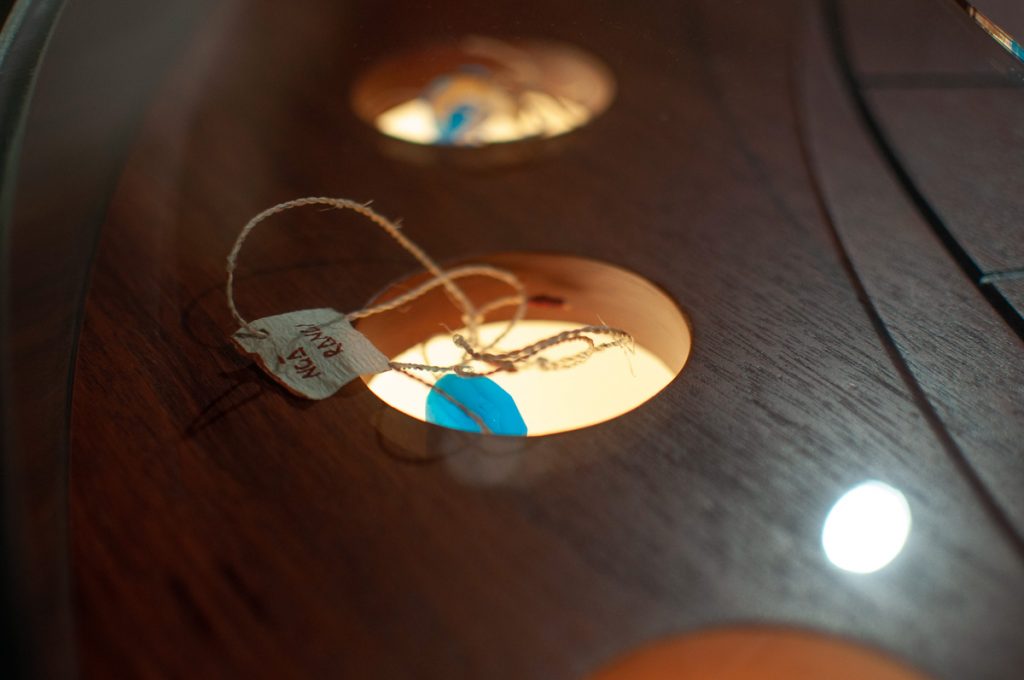 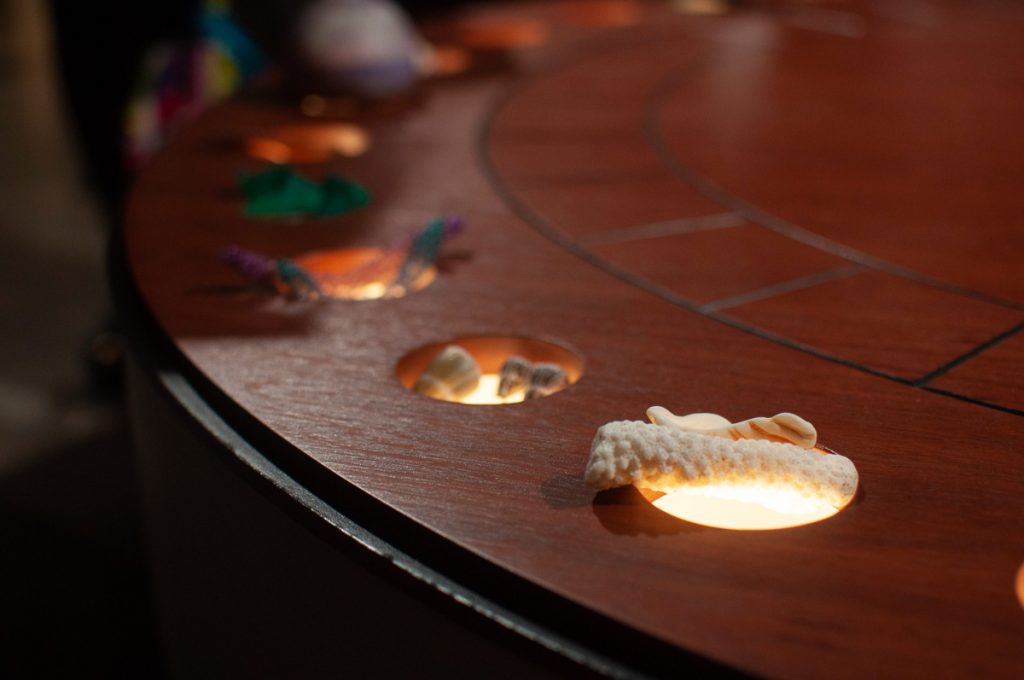 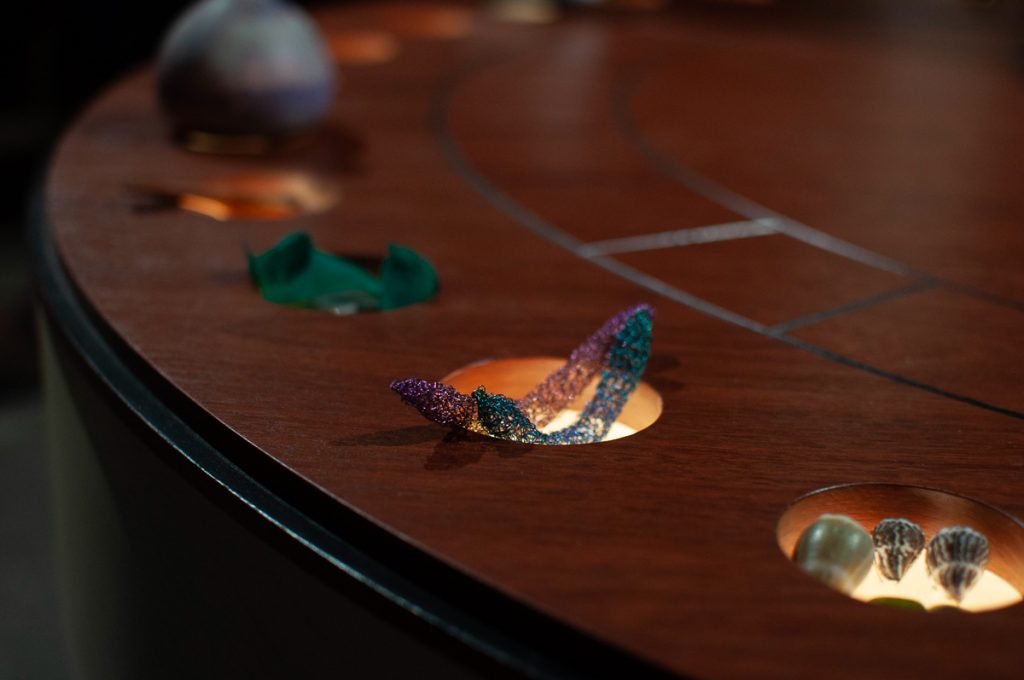 Here Nikau invites us to engage with Kāpehu Whetū.

Creating a star compass can be as simple as placing 32 bits of coral in a circle like Papa Mau Pialug, or as grand as Uncle Hekenukumai’s famous star compass of 32 pou whenua at Aurere. Either way the star compass provides a conceptual framework for understanding and teaching celestial navigation.

The second layer of this installation is about trade. I am inviting you to exchange the blue glass objects with something small of your own. There is no policing of these trades, it is up to the individual to decide the value of the object in the compass and the value of the object they replace it with. Over time, the houses will be an assortment of odd objects which can all be exchanged too. These silent trades allude to the potential of human nature to take advantage of a situation where the other party has less autonomy. It is for people to examine and/or witness within themselves, triumph, guilt or morality.

The blue glass references the blue glass beads that were used for trade by the Endeavour crew. Many are not aware that the first ever encounter with Cook resulted in the death of Ngati Oneone chief Te Maro. Cook placed beads and nails on his tūpāpaku. These blue glass beads are here to make people aware of the nine men shot by the Endeavour crew in Tūranga, Gisborne and the many more who died at the hands of the crew. By appearing in their physical form 250 years later we can reevaluate their trading value. You are invited to participate, activate and create discourse around value, exchange and partnership. Have a think and bring along something that challenges the idea of value so you can take part in the exchange.

Nikau then explains the objects that were exchanged for her blue glass beads.

The wooden spinning top was made on a lathe by my friend Oliver Roake an artist who works with wood and sound.

Another artist brought porcelain kumara (sweet potato) and she sent me a reflection via email explaining why.

“My exchange was one of my very few left:  Porcelain Kumara. When choosing it, I listened and it was the one that when I blew into it, it became an uku tangi. The Porcelain Kumara were originally created as symbols of our children, their fragility and leaving the seams and holes open gave them a raw voice, often an unheard one. The humble kumara with the expensive porcelain questions colonisation, whitewashing of a culture but at the same time I am Maori and Pakeha so it can talk from a hybrid view. I realised at your installation that by exchanging the kumara with the Kāpehu Whetū for me it was an idea of acknowledging the loss by offering a tipuna, a Taonga, a symbol of land and the value of our land as kaitiaki.” – Chantel Mathews.

There were two tokens made by 7558 Collective in remembrance of Te Maro and Te Rākau who were killed by the Endeavour crew in Turanga. (Cook placed blue glass beads on the body of Te Maro after they shot him.)

My aunty made a sewing kit because she is a clothes designer.

Another email: “Just to let you know that one of my friends swapped her peacock feathers for a blue stone. She lives at Tomorata and she loves her peacocks, she gathers their feathers and is going to make a cloak from them—so she said she is going to use the stone as the clasp on her creation—not only will it look really pretty but it has a great story attached to it.”