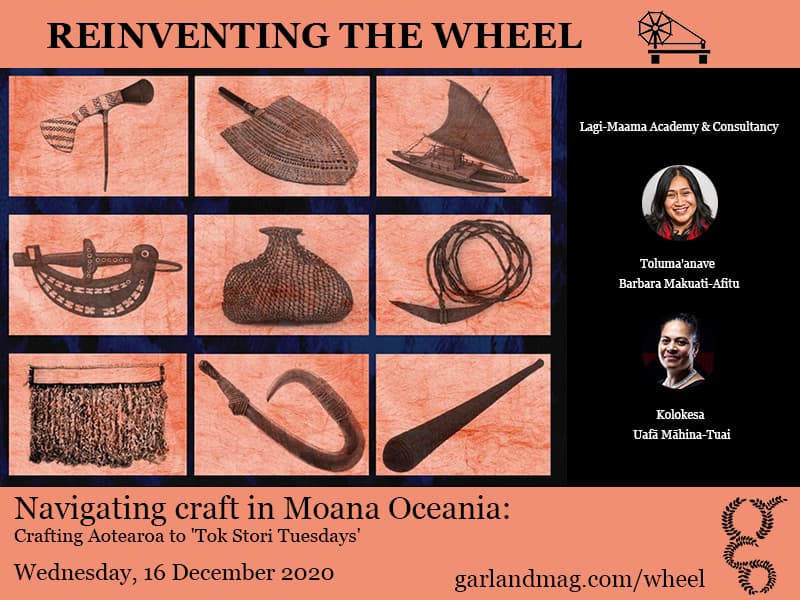 The third talk in Reinventing the Wheel takes us to Moana Oceania, where Lagi-Maama will help us appreciate the customary context for craft.

Moana Oceania has been the scene for major recent projects in the world of craft. Crafting Aotearoa was a monumental gathering of knowledges that reflected the diversity of cross-cultural practices of thinking and making. Following this publication, a research project on the “Arts of Moana Oceania” led to a series called “Tok Stori Tuesdays” which brought together knowledge keepers from across Moana Oceania to gift us their ways of knowing, seeing and doing “art” (and craft) that is inseparable to its lands and peoples.

A key agent in this is the Lagi-Maama Academy & Consultancy. We will hear from its founders, Toluma’anave Barbara Makuati-Afitu (Samoa) and Kolokesa Uafā Māhina-Tuai (Tonga) about what they’ve learnt in this journey and where it is heading.

This talanoa (talking critically yet harmoniously) will encourage an appreciation of the enduring vibrancy of Moana cultures. It will also provide a useful and inspiring model for those developing craft histories and conversations in other parts of the world.

Below is a brief report on the talk and recording:

Kolokesa Uafā Māhina-Tuai began with an account of the Crafting Aotearoa project, which she worked on with Karl Chitham and Damian Skinner under the combined name of Māhinnerham. She emphasised how they sought to approach the task of compiling a history of craft by broadening Western preconceptions of craft to include customary events such as the annual Tongan White Sunday, or Fakame, where special clothes are worn. She spoke of questioning the distinction between traditional and modern, as well as ethnographic concepts such as Melanesian, Polynesian, etc. However, the many contributors to the sidebars were free to use their own terminologies.

Non-English words were encouraged. A glossary was produced at the bottom of the page for easy reference and even repeated if necessary on other pages.

Barbara spoke about the development of the Lagi-Maama consultancy as a way of applying this approach to other institutional activities, such as the Vernon cataloguing system. This is a matter of helping people working in organisations to apply specific cultural lenses to different issues that enables them to gain understanding from different communities’ perspectives.

We had a broad conversation about how this approach might be applied beyond Moana Oceania. This included recent dialogues in Norway involving Sami peoples.

Vincente Diaz spoke of a project for building watercraft involving Micronesian, Dakota, and Norwegian boat culture in rural Minnesota. He argued that knowledge should be understood as part of the material world: navigation is a dialogue of wind and wave.

It is possible to see how this approach could be applied to other parts of the wider world, particularly in the South. Regions such as southern Africa have a similar mosaic of cultures and rich material history that has been underestimated in Western knowledge systems. The upcoming Indian Ocean Craft Triennial in 2021 offers a chance to extend this understanding to the other side of Australia.

The Western form of abstraction emanating from metropolitan centres such as London and Paris has been very productive in creating theoretical systems that span the world. Now it’s turn for knowledge systems from elsewhere that can better appreciate the differences in how we value objects. Moana Oceania is a region where cultures are frequently encountering each other. Protocols and ceremonies have developed to manage these meetings. This culture of mutual respect is something from which others have much to learn.

Fold craft: Uncovering the Nivi sari
The Art of Masks
The spirit of Japanese mingei in Brazil
Patricia Flanagan: Tracing the gestures of craft
Alchemy in Japanese traditional craft: The transformation of light in Tamahagane...
One Village One Product: A global platform for local craft
Bombay, batik & biotechnics: Gender and nationhood in modernist textiles
Nikau Hindin ✿ A star compass that makes history