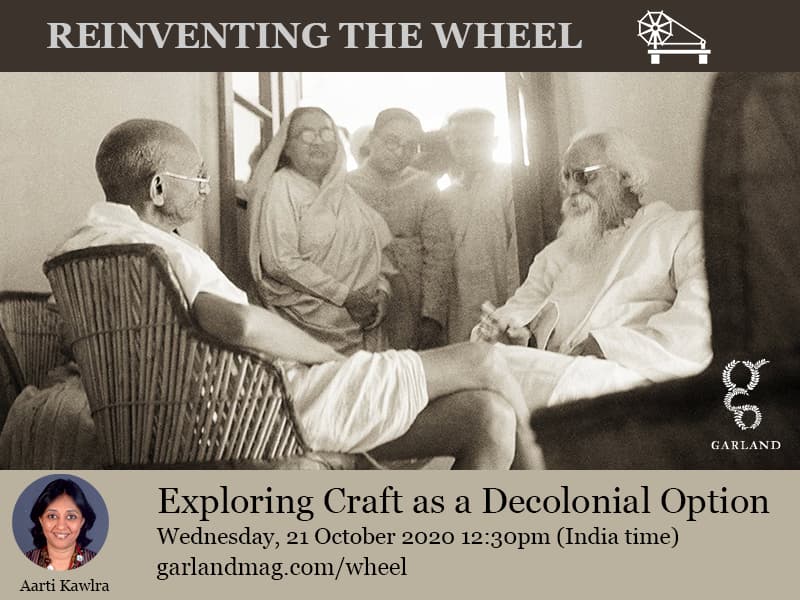 This paper proposes to view the practice of craft as an autonomous site for imaginaries beyond nation. Cultural nationalist explanations have tethered craft to an elucidation of difference within a colonial matrix of power, whose epistemic edification is articulated as an indigenized science and technology or a re-orientalised folk art tradition. Post-colonial historiography and anthropological analyses interrogate the colonial legacy of craft as a hegemonic frame circumscribing local realities but remain confined to the authorising script of a developmentalist state. Both perspectives situate craft within a cultural paradigm defined by imperialist and nationalist registers respectively.

Going past what Duara (2010) has called the twentieth-century moment of nationalist congruence between state and culture, my aim is to illuminate decolonial readings of the deployment of craft in modernity. How was craft dislodged from its rootedness within reified cultural traditions inhabiting the nation to enunciate decolonial ‘thinking and doing’ (Mignolo, 2011)? Under what conditions did craft transfigure into a politico-aesthetic marker of human truth and subjectivities anticipating decolonised futures?

This paper explores the reconstitution of craft-work as an exemplary practice of self-reliance and cooperation through an examination of Rabindranath Tagore’s experiments in rural reconstruction and pedagogic practices. His human-ecology approach to productive action and realisation of the self was grounded in local community life but its humanist vision of liberation transcended boundaries of nation and national selfhood. In what ways are his ideas of ‘joy’ in work and ‘creative unity’ still relevant, given the contemporary disavowal of craft in the ‘global hierarchy of value’ (Herzfeld, 2004), where ‘hand work’ or ‘making’ is a marginalised livelihood option among the rising generations? These are some questions that will be raised in this presentation.

Herzfeld, M. (2004). The Body Impolitic: Artisans and Artifice in the Global Hierarchy of Value. Chicago: University of Chicago Press.