Hanji – before and after Korea by Jan Coveney 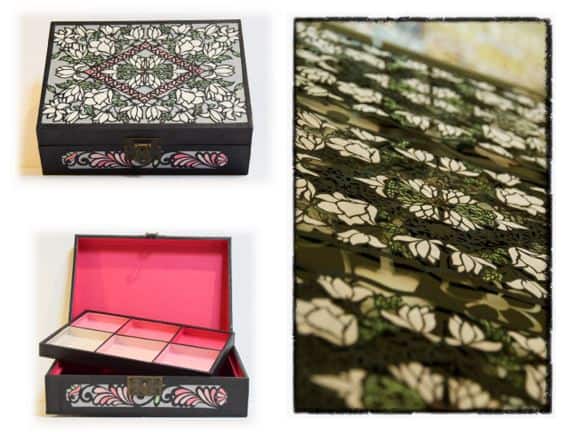 Han-ji is the word for traditional Korean paper and it’s also used to describe the art of making objects out of the paper. (‘Han’ refers to the Korean people and ‘ji’ means paper). Korean Hanji is extremely robust as it’s made from the bark of the mulberry ‘dak’ tree and is one of Korea’s oldest and most durable products, dating back to the Three Kingdoms period around 130 AD. Hanji crafts began mainly out of necessity when Korean households needed everyday items that were often unobtainable due to economic reasons, therefore the people made them out of readily available materials such as paper.

There are several forms of hanji crafts and they include jiho, jido, and jiseung.  Jiho is a method that uses hanji scraps soaked in water and then added to glue, making a clay-like paste that can be molded into lidded bowls. Jido is the craft of pasting many layers of hanji onto a pre-made frame, which can be made into sewing baskets and trunks. Jiseung is a method of cording and weaving strips of hanji to make a wide array of household goods, including trays, baskets, mats, quivers, shoes, washbasins, and chamber pots. Eun Hye Kim’s informative article, ‘Wish upon Jiseung’ in the first issue of Garland, discusses one of these Hanji art forms.

Hanji (paper) is ideal for using in three-dimensional Hanji crafts because when it’s wet it moulds easily over cardboard and the fibres cling to the object. It comes in a huge variety of colours and textures and each sheet is unique.

Hanji items are made by cutting a shape, which can be anything from small boxes up to quite large pieces of furniture, out of 3mm thick cardboard. It’s then glued together and covered with a layer of Hanji paper. Traditional designs are cut out of a thin layer of paper and they’re then underlain with different coloured papers and this is placed on top to decorate it. The item is then finished off with a layer of lacquer to give it a durable finish.

An Australian, living in South Korea exporting Hanji pieces to the U.S.  – this was the bizarre situation I found myself in about 15 years ago.

Living and working in South Korea, and as someone who loved crafts, I was soon introduced to the traditional Korean craft of Hanji.  As an expat, and one who was used to doing the normal mainstream western crafts of knitting, needlework and quilting, I was interested to try something new and to find out more about this exotic craft. It all began in my Korean friend’s lounge room in the year 2000 and before long I was hooked.  My passion for doing Hanji soon grew and I ended up taking more and more classes and ended up filling my small apartment with a variety of Hanji pieces.

What initially drew me into doing Hanji was the practicality of the craft where you could make useful everyday objects. I was excited to think that I could use the beautiful handmade mulberry papers that I’d seen everywhere in the shops and when I started, my enthusiasm grew as I enjoyed the tactile processes of moulding the paper over objects and creating unique pieces..

Soon I had to move to a larger city, due to work commitments.  I quickly found that it wasn’t so easy getting supplies when my command of Korean wasn’t all that good. Desperate to continue I sought out and found others with a similar interest to mine and they were able to direct me to specialty Hanji shops that stocked the most wonderful array of papers, hardware supplies, glues and cardboard kits. My small apartment became crammed with new designs and to help alleviate the clutter I sold some of my items to other expats to send home to the US, UK, Australia and beyond.

During my time in Korea I started an English website to document my Hanji journey and because of that, I was contacted by an importer from New York who wanted some of my pieces to sell to museum shops in New York.

My passion for this wonderfully exotic Korean craft was now fully ignited and everything was going well until I left Korea, and the pursuit of it then became a lot harder.

At that time the Internet and Google were becoming everyone’s main source of information, but once out of the country I came to a dead end as far as ordering supplies and learning any more about Hanji. What little information was out there was sparse and all in Korean. Some books have been written about the Korean paper itself; others give it a page or two but after a lot of research, none that I have found are dedicated to the craft itself.

As with many traditional crafts in different countries around the world they’re handed down from generation to generation via word of mouth and are not necessarily documented at all, let alone in any great detail

Time has past and I’ve found ways around most of the obstacles I’ve encountered. I’ve now documented most of what I know and am continually striving to learn new techniques, research more and inspire others outside of Korea to take up Hanji as well as enlisting the help of Korean friends to translate websites to buy supplies. I’ve been teaching Hanji for about 10 years now in different places I’ve lived and helping others discover this wonderful craft. I’ve made regular trips back to Korea to update my skills, buy supplies and maintain contacts to keep the passion alive.

As time moves on, I’m more passionate than ever and I’d love this craft to become better known by a wider, more global audience.

As with any creative processes, sometimes out of necessity and sometimes for experimentation purposes our crafts evolve, but I believe that when we choose to do a traditional craft that it’s important to always try to incorporate traditional elements into the pieces.

Jan lives in Adelaide, South Australia and has studied the craft under several different Hanji artists in Korea, the latest being a 6 week intensive course in Seoul in 2015. She’s taken international Hanji students to Korea to visit papermaking factories and to source Hanji materials. She’s been teaching Hanji in Malaysia, the United Arab Emirates and Australia for the last 12 years.  Her blog has been featured in the Korea4expats website and voted to be one of the top expat blogs by Internations. She recently gave a presentation in Seoul entitled, ‘Hanji – Life after Korea’ and held a solo Hanji exhibition in Adelaide, during April 2015 entitled ‘From paper to purpose …’.

For more information on Hanji check out her blog hanihappenings.blogspot.com and website hanjiartist.com.