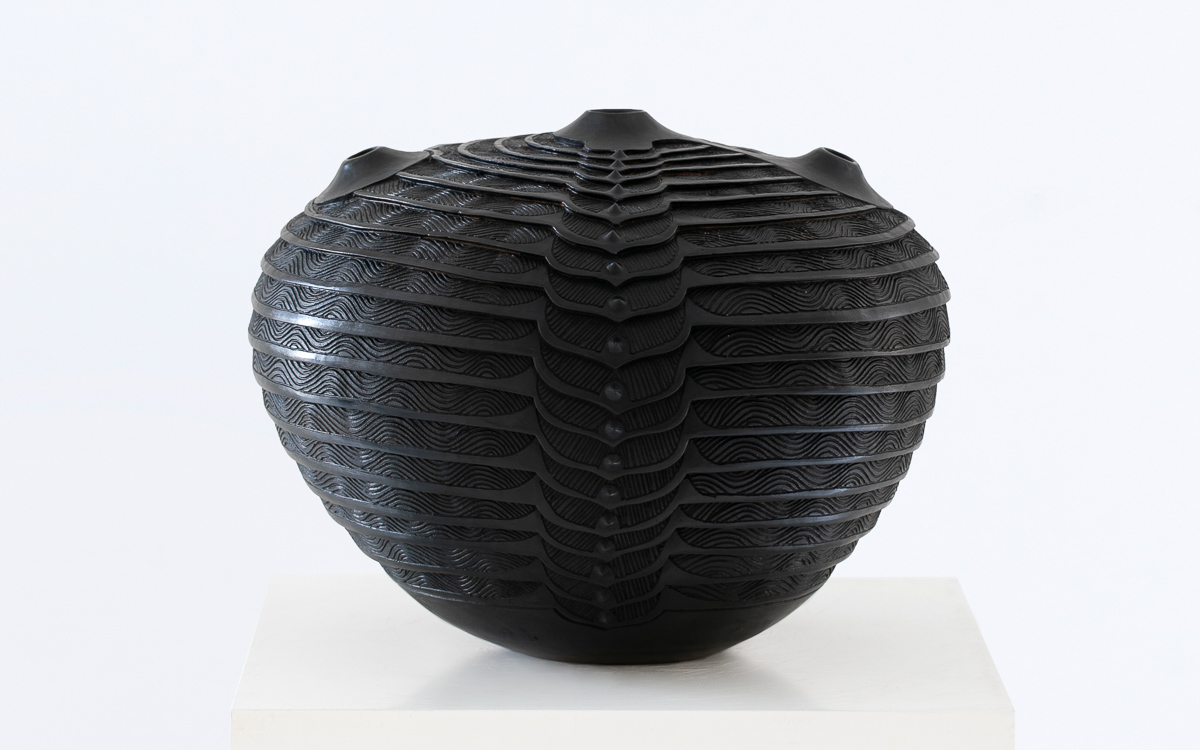 The Cape Town ceramicist Madoda Fani takes the road to success and finds his way back home.

Southern Guild is one of a new generation of galleries that feature artists from a traditional background who interpret vernacular crafts. Thanks to Southern Guild, the South African ceramicist Madoda Fani has been catapulted from a humble Cape Town township to an elite circuit of collectable design, He has even featured in a promotion for a BMW luxury car. What’s it like for Madoda Fani to find his work celebrated on the international stage? How does he retain a connection to his traditional roots?

Madoda Fani grew up in Gugulethu, one of the large townships in Cape Town. His parents had moved there from the Eastern Cape to find work. Like most children in the township, Fani made toy cars from wire. But unlike many, Fani managed to find a path for his aspirations into the world. As a harbinger of this work promoting BMW, he also made some money as a model for school clothes.

Fortune paved the way for Fani. After studying graphic design in 1999, Fani needed funds. With the help of his fellow student Andile Dyalvane, he found a job at the Potter’s Workshop. His work was entered for the Salon Internationale de l’Artisanat de Ouagadougou in Burkina Faso and it received second prize, which involved his first travel out of South Africa. There he met Simon Masiello and was inspired by his smoke-fired pots. He then moved to Johannesburg where he found a place with the collector and gallerist Kim Sacks, who introduced him to the traditional Zulu ceramicist Jebu Nala, who taught him the burnishing technique. Fortuitously, he took over the studio of a Norwegian ceramicist with a full set of equipment. 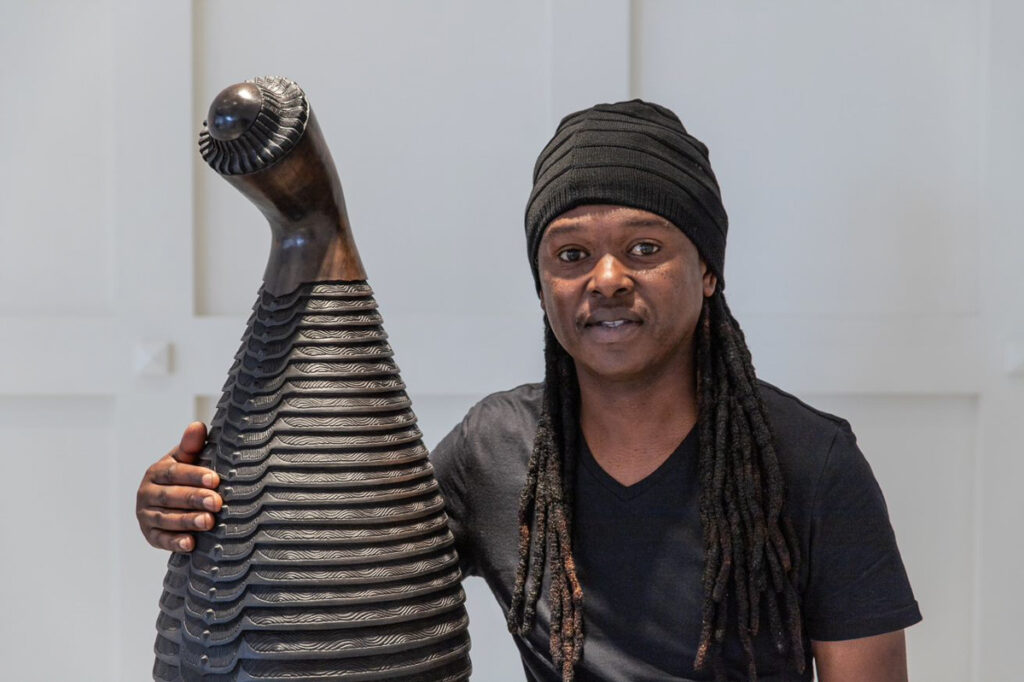 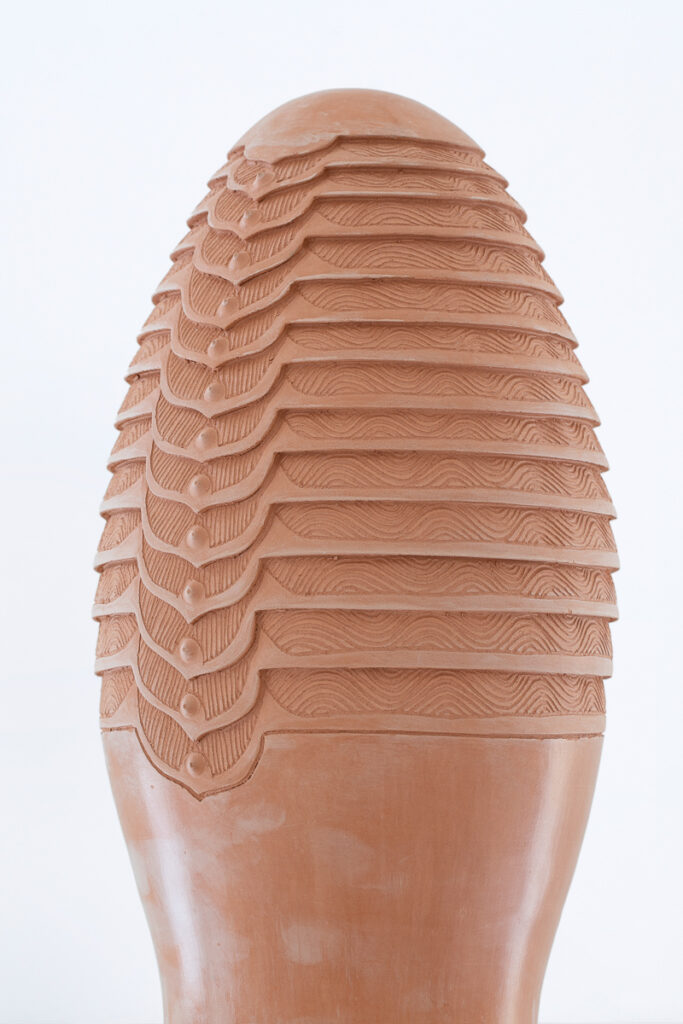 Fani was approached by the Cape Town gallery Southern Guild in 2011. As well as showing this work, they have taken an active interest in his creative development.

“They are the ones who would come and say now, for this exhibition how do you feel about using a material like wood? Or bronze? You know, they will discuss and help me decide on what I should do for the next exhibition.”

He is happy that they sell his work.

“I’ve got work now that is going to Miami. I have exhibited there for more than five years now.  And every time I don’t have work coming back. I had a problem before where I had work in a gallery for six months and then they won’t be able to sell and I have to collect it back. So they’ve got all these big platforms around the world.”

At the same time, he acknowledges that other South African galleries are not so happy that they can’t feature his work. 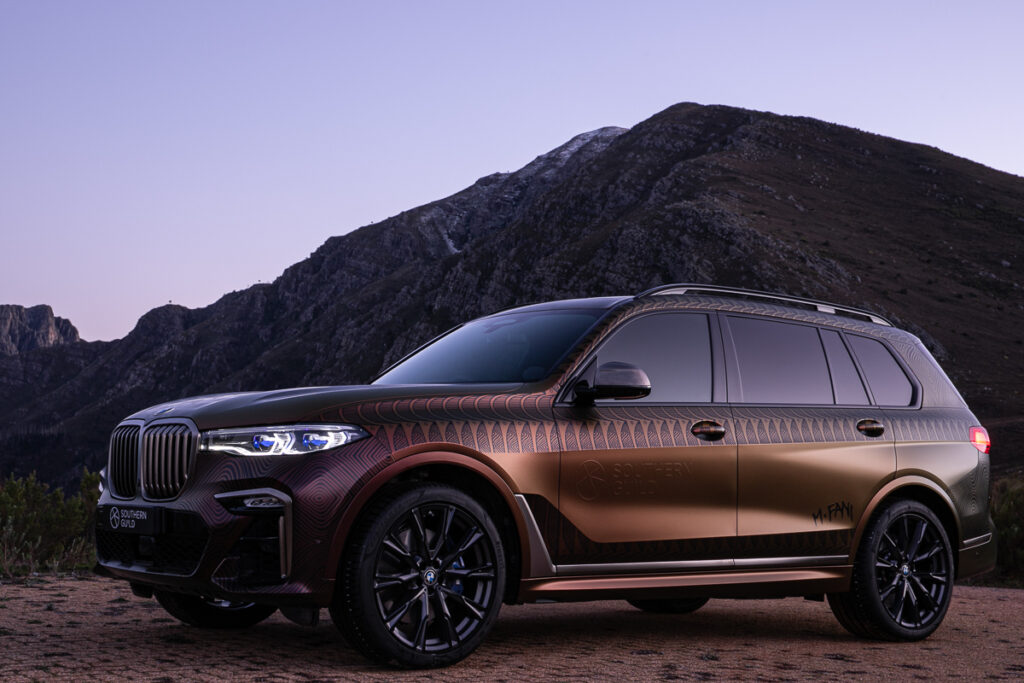 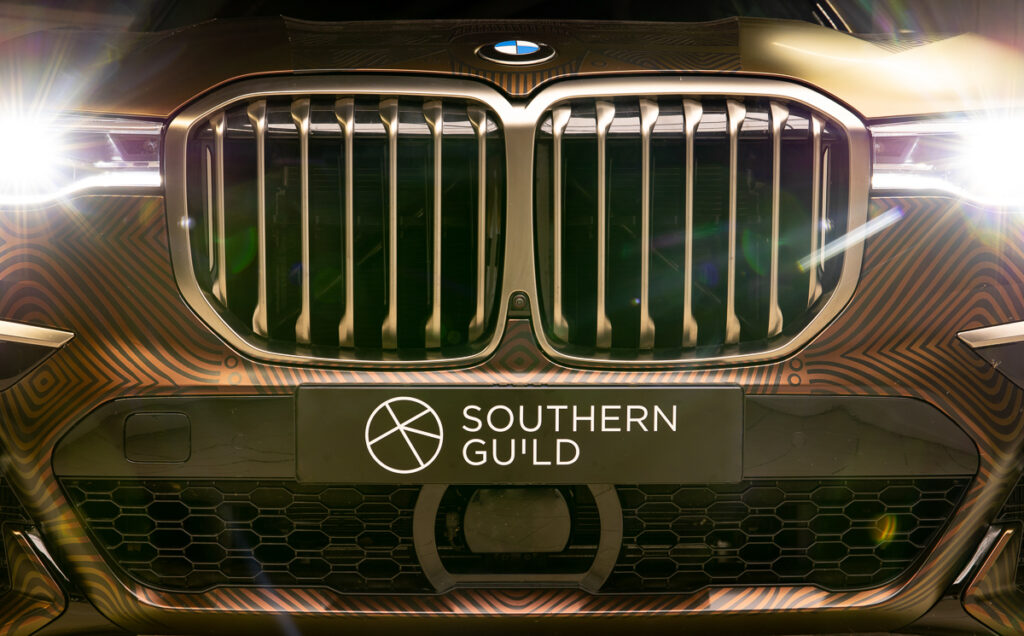 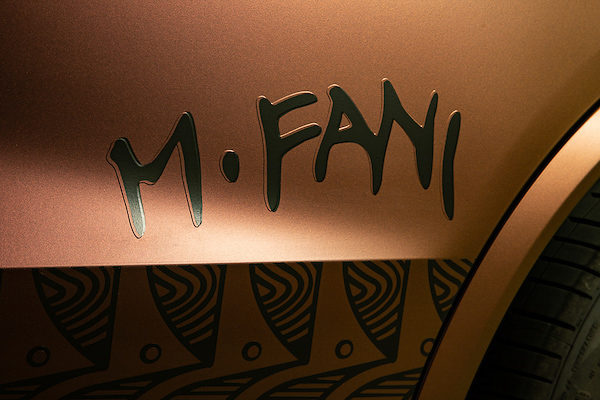 Southern Guild also introduced him to their buyers who were keen to get to know Fani personally. The gallery then invited Fani to do a promotion for a new model BMW. After a few proposals, they eventually settled on the exoskeleton design that is characteristic of his ceramics.

Fani is aware that some might resent his success. Despite being someone who is identified with an elite luxury car, he insists on taking the public taxis around Cape Town. “But I’m a very grounded person, you know. I still take a taxi at times to go to the studio. I don’t want to be seen in the car where people would feel distance from you.” 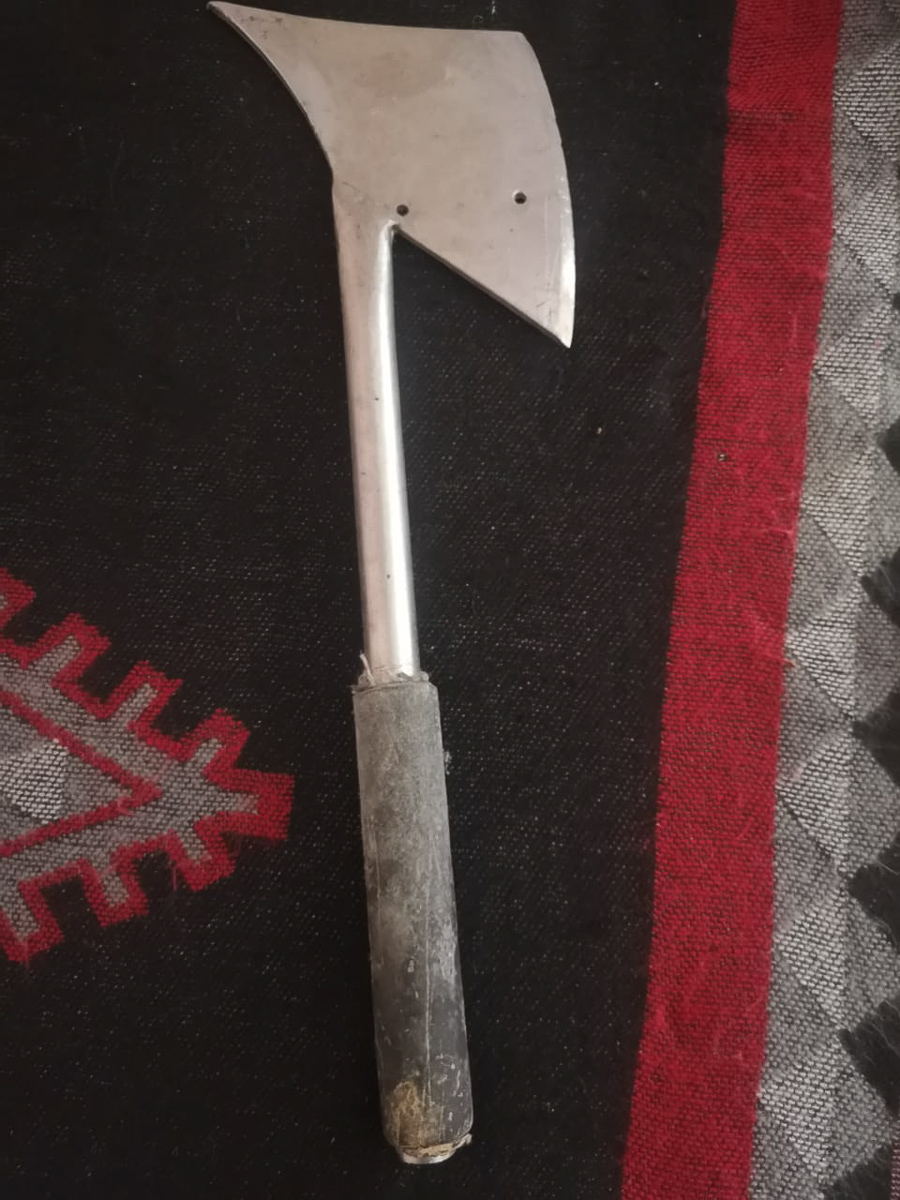 An axe made by the father of Madoda Fani

He attributes this groundedness to his father. He had much work as a construction worker during Cape Town’s rapid development.

“So he worked with steel the most. He was a welder joining the steel for the roofs of those buildings. And I remember him coming back from work, he would take some of the scraps, like bits and pieces that would be a bit cut off. So he’d come back home with those, and he had a welding machine at home. So we’d make crazy stuff that I didn’t understand at that time, you know, that he was an artist as well.”

His father’s name was MzuluKosi, which means House of Kings, but he was known as the “Ghost”. Fani was curious about this name and eventually asked his aunt.

“So she told me a story that my dad had planted mielies (corn) at the back of the house. The problem was the birds would keep on eating them. So he decided to make a scarecrow to scare the birds away. But he spent so much time on that scarecrow, it looked like a person. You know, it was a beautiful sculpture. They put it there and then he went to his friends and they were drinking beer all night. Coming back at night, they thought they saw a ghost. He forgot it was his making.”

Like his friend Andile, Fani is now using his craft to recover the traditions that had been missing in his life. He has been making “amazinki” (beer pots) for the ritual ceremonies with his family. “I decided to make one for my family, so it can be used every time and this is a very important thing for me, you know, so I’ve just done a ceremony a month ago.”

For many watching the BMW advertisement, Fani will provide a slick veneer of tribal mythology on what is otherwise an industrially made machine. For Fani himself, it is part of a life’s journey that eventually takes him back to his family and the challenge of sustaining traditional culture with one’s own hands—manual, not automatic. 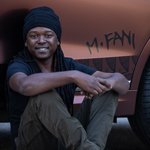 Madoda Fani is a ceramic artist living in Cape Town where he works at Fani Ceramics. He shows with Southern Guild.  Follow @fanimadoda.

Habitat: Terracotta homes for hard-working bees
Remembering when the world came to Kyoto in 1978
Vipoo Srivilasa: Will my heart remember?
Juukan Tears Offcuts
Take a chance on art
Love in a time of colonisation
My pots from Pakistan and the memories they keep alive
Ran Out