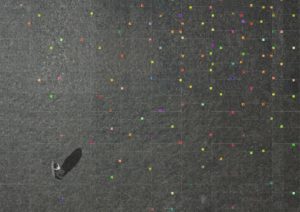 The Adelaide jeweller Jess Dare has just completed a commission for Sydney’s Martin Place. This memorial for victims of the Lindt Cafe siege contains 210 individual flowers set in glass cubes embedded in the pavement. This provides a permanent version of the sea of flowers that flooded the square in the wake of the tragedy. 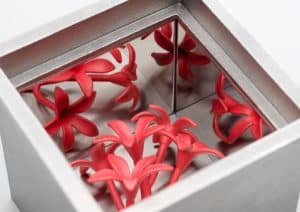 Jess Dare’s previous article for Garland about her Thai residency continues to be one of our most popular. In a similar fashion, she attempted to put into more durable material the ephemeral forms of the Thai floral garland, phuang malai. Rather than reflect the garland at full bloom, she depicted instead the wilting forms after their ritual use.

As with the lei jewellery of Fran Allison and plastic garlands in the solevu of Te Moana nui a Kiwa, Dare’s work demonstrates the function of jewellery to give more permanent form to ceremonial adornment. As such, urban jewellery is able to reflect the customary forms that are part of its regional cultures. But it also does contain a paradox. Is our appreciation of a flower’s beauty heightened by the sense of its ephemerality? Would it have been different if the original offerings made in Martin Place were plastic flowers? Perhaps it is the fleeting nature of their beauty which motivates us to capture it in solid form.

But we will always need to the primary organic forms. As Emelihter’s poem tells us, home “is where the fragrance waits.”